AIM: To assess the alcohol drinking patterns in a cohort of primary sclerosing cholangitis (PSC) patients and the possible influence on the development of fibrosis.

METHODS: Ninety-six patients with PSC were evaluated with a validated questionnaire about a patient’s lifetime drinking habits: the lifetime drinking history (LDH) questionnaire. In addition, clinical status, transient elastography and biochemistry values were analysed and registered. Patients were defined as having either significant or non-significant fibrosis. Significant fibrosis was defined as either an elastography value of ≥ 17.3 kPa or the presence of clinical signs of cirrhosis. Patients were divided into two groups depending on their alcohol consumption patterns; no/low alcohol consumption (one drink or unit/d) and moderate/high alcohol consumption (≥ 1 drink or unit/d). LDH data were calculated to estimate lifetime alcohol intake (LAI), current alcohol intake, drinks per year before and after diagnosis of PSC. We also calculated the number of episodes of binge-drinking (defined as consuming ≥ 5 drinks per occasion) in total, before and after the diagnosis of PSC.

RESULTS: The mean LAI was 3882 units of alcohol, giving a mean intake after onset of alcohol consumption of 2.6 units per week. Only 9% of patients consumed alcohol equal to or more than one unit per day. Current alcohol intake in patients with significant fibrosis (n = 26) was less than in patients without significant fibrosis (n = 70), as shown by lower values of phosphatidylethanol (B-PEth) (0.1 μmol/L vs 0.33 μmol/L, respectively, P = 0.002) and carbohydrate-deficient transferrin (CDT) (0.88% vs 1.06%, respectively, P = 0.02). Self-reported LAI was similar between the two groups. Patients with significant fibrosis reduced their alcohol intake after diagnosis from 103 to 88 units per year whereas patients without fibrosis increased their alcohol intake after PSC diagnosis from 111 to 151 units/year. There were no correlations between elastography values and intake of alcohol (units/year) (r = -0.036).

All patients diagnosed with PSC at the Department of Gastroenterology and Hepatology, Karolinska University Hospital are recorded in a local PSC register.

Eligible for this study were 141 patients with PSC who were identified as currently living in the Stockholm area and who were having their regular follow-ups at our clinic.

The diagnosis of PSC were made according to accepted criteria; i.e., typical cholangiographic findings of bile duct irregularities, strictures and dilatations or histological findings of cholangitis, or signs of small-duct PSC in combination with biochemical and clinical findings[4,17]. We excluded 32 patients with a recent diagnosis of cancer, not Swedish speaking, presence of Down’s syndrome, dementia, current pregnancy, severe psychiatric disease (e.g., psychosis, bipolar disease), co-existing liver diseases (e.g., hepatitis B and C or hereditary hemochromatosis). Four patients declined to participate. The study cohort and patient selection are summarized in Figure 1.

Figure 1 Flow chart for inclusion of patients. 1Exclusion due to: Not Swedish speaking, presence of Down’s disease, dementia, current pregnancy, severe psychiatric disease, co-existing hepatic disease (hepatitis B or C, hemochromatosis, recent diagnosis of liver cancer) or patients who had moved to other parts of the country or declined to participate (n = 4).
Data collection

From our registry and patient charts, the following data were registered: duration of disease, age, sex, co-existing inflammatory bowel disease (IBD, diagnosed through endoscopy and histology), symptoms, smoking and body mass index (BMI). The patients were interviewed with a structured protocol for confirmation and validation of the data collected from the registry and for current symptoms and alcohol habits, including the question as to whether the patients had reduced their alcohol intake after the diagnosis of PSC was established.

At the interview, patients received the lifetime drinking history (LDH) questionnaire, a detailed and validated questionnaire about the patient’s lifetime drinking habits[18,19]. This questionnaire allows the calculation of the total number of units during the patient’s lifetime, with the possibility of calculating changes in drinking habits during life. It also allows measurement of total number of binge drinking episodes, defined as drinking 5 or more units of alcohol at one occasion. One unit of alcohol is equivalent to 12 g of alcohol. Patients were thoroughly informed about the questionnaire and later filled it out at home. When data were missing, the patient was contacted by telephone and information was supplemented through a telephone interview. Six of 105 patients (5.7%) did not return the LDH questionnaire despite being reminded and were excluded. No/low alcohol consumers were defined as drinking less than one drink per day, and moderate/high alcohol consumer as drinking equal to or more than one drink per day.

Continuous variables were analyzed using the Mann-Whitney U-test or the Wilcoxon Signed Rank Test where appropriate. For comparison of categorical data the χ2 analysis was used or, in the case of small expected frequencies, F test. For correlation tests of linear data, the Pearson r test was used. We controlled the results for duration of disease using co-variance analysis of variance. Statistical data were analyzed using the Statistica® 9.1 software (StatSoft Inc., Tulsa OK) and SAS 9.2 software (SAS Institute Inc., Cary NC).

The local ethics committee at Karolinska University Hospital approved this study, registry No: 2009/1894-31/1. Written informed consent was obtained from all participating subjects.

Clinical characteristics and data on lifetime alcohol consumption for the 96 patients are presented in Table 1. There were 66% men, mean age was 47 ± 13 years (range: 22-75 years) and 73 patients (76%) were diagnosed with concomitant IBD. Mean elastography value was 11.1 ± 8.2 kPa (range: 2.8-48 kPa). Seven patients (7.3%) had been diagnosed with PSC before they first started drinking alcohol. There were no cases of patients with Child-Pugh score of 10 (i.e., class C) or higher.

Comparison of patients with and without significant fibrosis 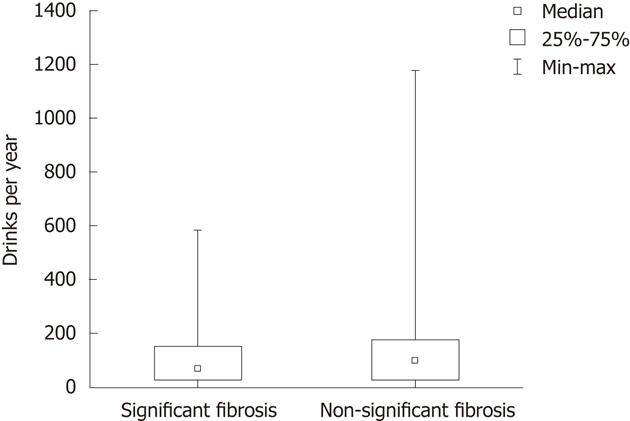 Figure 2 Comparison between the total mean units of alcohol per year for the significant and non-significant fibrosis group. 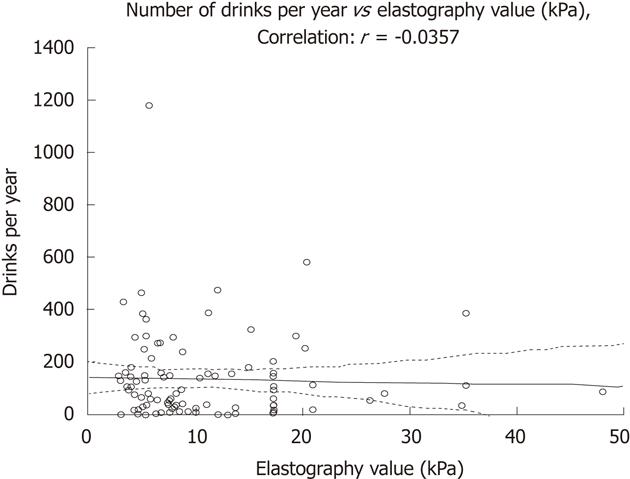 Figure 3 Correlation between elastography values and units per year. Patients with clinically significant fibrosis but not a valid elastogram were given the value of 17.3 kPa.
DISCUSSION

Binge drinking decreased in both patients with significant and non-significant fibrosis after PSC diagnosis. This finding may reflect a change in drinking pattern with age, rather than the presence of PSC. Also, there is a general trend in Sweden towards less binge drinking[31]. The total alcohol consumption in Sweden has increased by approximately 15% since the mid 1990s[31,32]. Thirty-eight percent of all our patients reported that they had reduced their alcohol intake after the PSC diagnosis; however, the trend when looking at the LDH data was an increase in the total yearly alcohol intake. The perception of having reduced the consumption may be related to a reduction in the occasions of binge drinking episodes, which was confirmed in the questionnaire.

One limitation of the present study is the retrospective self-reported alcohol intake, which may be impaired by recollection bias. However, the LDH questionnaire is well validated and has a high test-retest correlation[19,33]. We also had a high response rate to the LDH questionnaire which is why we believe that our data are reliable. In addition, there is a risk that we have underestimated the presence of significant fibrosis since we did not perform liver biopsies to measure fibrosis. Liver biopsy is not mandatory for the diagnosis of PSC and we chose to refrain from biopsies for ethical reasons due to risk of complications. The role of transient elastography in cholestatic liver disease is not well established, although it has been shown to be a good alternative to histology for evaluating fibrosis, mainly in HCV, but also in other chronic liver diseases[20,34-36].

Chalasani et al[16] reported in 2000 that alcohol was a risk factor for developing cholangiocarcinoma (CCA) in PSC; however, they were unable to quantify the amount of alcohol consumed. Our data can at present not evaluate whether alcohol intake is important for CCA since none of our patients have developed CCA. However, we have obtained solid data regarding alcohol consumption in a large cohort of PSC patients which is being prospectively followed. This allows future studies exploring the role of alcohol as a risk factor for developing CCA in this cohort.

This is the first study of the alcohol consumption pattern in a large cohort of PSC patients and they aimed to correlate this to the occurrence and degree of fibrosis.

By increasing their knowledge of risk factors for progression of fibrosis in PSC, this study can help give doctors relevant information to patients regarding their alcohol habits.

The paper is an interesting paper assessing the lifetime drinking history. The paper is quite well written but the reader needs reason for using certain biochemical variables in this context and the statistical analysis has to be better explained. Also most readers of this paper do not know what is the amount of drinks used by patients with alcohol dependency and alcoholic cirrhosis.