AIM: To investigate the effect of side-stream smoking on gut microflora composition, intestinal inflammation and expression of tight junction proteins.

Cigarette smoking is a remarkable etiological factor in the pathogenesis of cardiovascular diseases, hypertension, pulmonary diseases and gastroenterological diseases[1-4]. Meanwhile, passive smoking (second-hand smoking) is also a contributing factor for the development of coronary artery disease[5-7], lung cancer[7] and Crohn’s disease[8], which pose a substantial health risk to non-smoking adults and young children worldwide[9]. It was estimated in 2004 that more than 600 thousand deaths were due to second-hand smoke, which accounted for about 1% of worldwide mortality[9]. On the other hand, it was reported that smoking had a protective effect in reducing ulcerative colitis mostly based on the epidemiologic studies[8,10,11].

Chronic inflammatory bowel diseases, mainly Crohn’s disease and ulcerative colitis, are characterized by chronic inflammation of the intestines[8]. Recent studies clearly show that gut epithelial integrity and barrier function are the central predisposing factors in inflammatory bowel diseases, autoimmune and related allergic diseases[12-16]. The intestinal epithelium is composed of tightly assembled intestinal epithelial cells which form a protective barrier against pathogenic and commensal bacteria, preventing their penetration from the lumen to initiate inflammatory responses in the mucosal system[17]. Impairment of the tight junction barrier is associated with chronic diseases such as inflammatory bowel diseases, obesity and type 1 diabetes[18-21]. Epithelial cells form an integrated web through interaction of tight junction proteins including intracellular proteins, zona occludens (ZO)-1, (ZO)-2 and (ZO)-3, cingulin, 7H6 and ZA-1, and membrane proteins, occludin, claudin and junctional adhesion molecules[22,23]. The tight junction functions are affected by extracellular stimuli such as the microbial components, pro-inflammatory cytokines and stress[24,25].

We hypothesized that side stream smoking may possess a potent anti-inflammatory effect on the gut mucosal immune system which promotes the expression of tight junction proteins in the intestine, exerting beneficial effects on the prevention of ulcerative colitis.

C57BL/6 female mice at 6 mo of age were housed in a temperature-controlled room with a 12 h light and 12 h darkness cycle and were given food and water ad libitum. Mice were placed in an exposure box and exposed to side-stream smoke for 1 h daily for 40 d. Commercial cigarettes (golden monkey, tar: 13 mg; nicotine: 1.1 mg; CO: 15 mg) were used at a dose equivalent to one commercial cigarette’s smoke per day[37]. The animal care procedures described in this study was approved by the University of Wyoming Institutional Animal Use and Care Committee.

On the day of necropsy, mice were anesthetized intraperitoneally with tribromoethanol (250 mg/kg body wt). Blood samples were collected from the orbital sinus while mice were under general anesthesia. Mice were then sacrificed by cervical dislocation. Large intestines were dissected, flushed with phosphate-buffer saline and then frozen in liquid nitrogen for immunoblotting and quantitative reverse transcriptase polymerase chain reaction (qRT-PCR) analyses. Cecal contents from each mouse were collected and frozen for microflora analyses.

Total RNA was extracted from powdered large intestine using Trizol®Reagent (Sigma, St. Louis, MO), treated with DNase I (Qiagen, Valencia, CA) and purified with RNeasy Mini kit (Qiagen). cDNA was synthesized with the iScript™ cDNA synthesis kit (Bio-Rad Laboratories, Hercules, CA). qRT-PCR was conducted on a Bio-Rad CFX96 machine and SYBR Green Master Mix (Bio-Rad Laboratories, Hercules, CA) was used for all qRT-PCR reactions. Mouse GAPDH was used as the housekeeping gene. Primer sequences are listed in Table 1. The final primer concentration was 200 nmol for each gene. The amplification efficiency was 0.90-0.99. The qRT-PCR conditions were 95 °C, 3 min, and 35 cycles of 95 °C for 10 s, 58 °C for 20 s and elongation step at 72 °C for 20 s. At the end of each run, dissociation melting curve was obtained to confirm the purity of PCR products[38].

Immunoblotting analyses were conducted as previously described[39,40]. Briefly, protein extracts from the mouse large intestine were separated by 5%-15% sodium dodecylsulfate polyacrylamide gel electrophoresis (SDS-PAGE) gradient gels and transferred to nitrocellulose membranes for immunoblotting analyses. Band density was normalized according to the GAPDH content[39,40].

Quantitative PCR analysis of 16S rRNA showed that exposure of C57BL6 mice to side-stream cigarette smoking increased the amount of Clostridium clostridiforme and mouse intestinal bacteria (MIB) in the cecal microflora, while decreasing the content of Lactoccoci, Ruminococcus albus, Enterobacteriaceae and segmented filamentous bacteria (SFB) compared with those of control mice (Figure 1).

Side-stream smoking decreased phosphorylation of NF-κB p65, a key mediator of the NF-κB inflammatory signaling pathway. Consistently, phosphorylation of IκBα and IKKα/β were also down-regulated in mice exposed to side-stream smoking, indicating that smoking is capable of reducing inflammation in the gut (Figure 2). qRT-PCR analysis indicated that mRNA expression of the two main inflammatory cytokines, TNFα and IL-6, were not changed (data not shown). 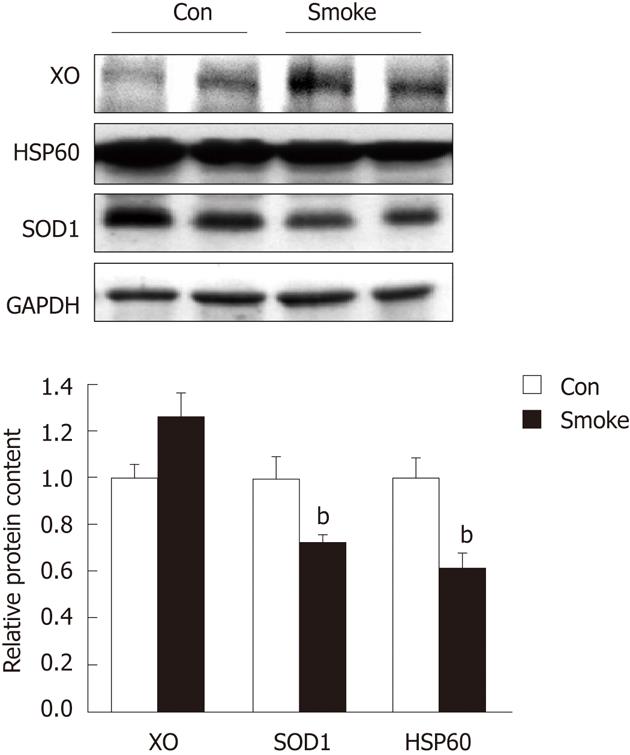 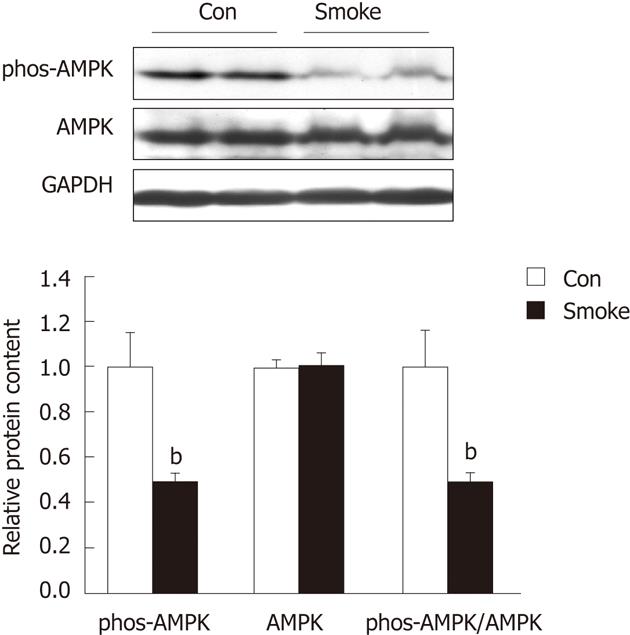 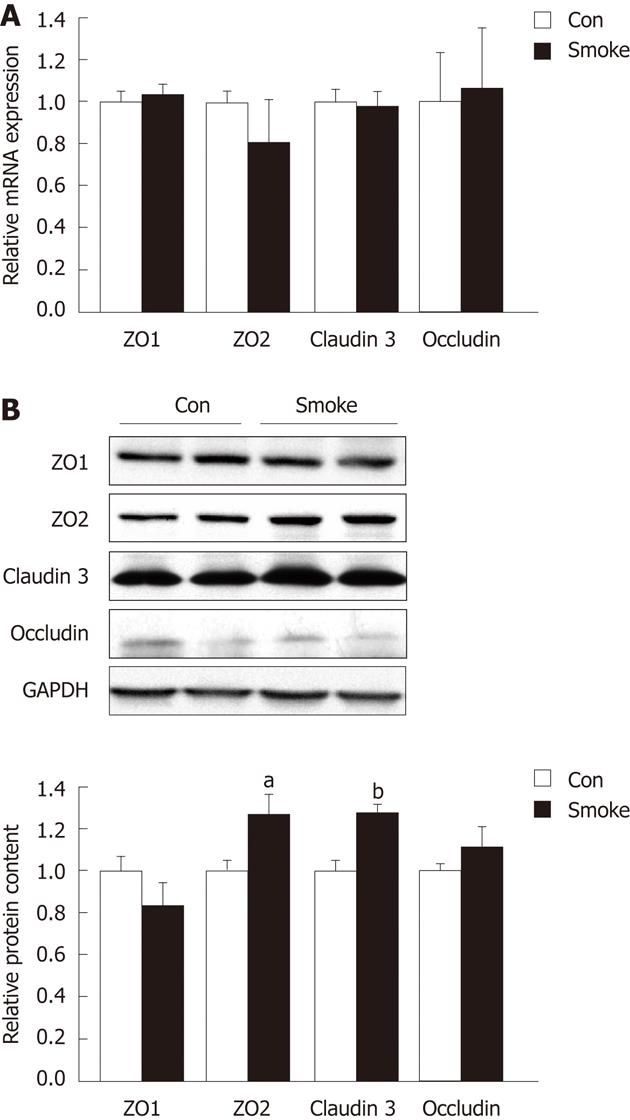 Epidemiology studies have shown that smoking, including passive smoke inhalation, reduces the incidence of ulcerative colitis, which may be due to the reduction of epithelial permeability[44]. Intestinal permeability was reduced in healthy smokers compared to the non-smokers[45,46].

A recent published study in gut epithelial cells shows that AMPK is related to the impairment of tight junction and barrier properties of gut induced by inflammation[53]. Our data showed that AMPK activity was dramatically inhibited in the gut tissue of side-stream smoking mice, which may provide an additional mechanism for the association between passive smoking and gut epithelial barrier function.

Furthermore, we found that microflora were altered due to the side-stream smoking. The “microflora hypothesis” suggests that gut microflora composition plays an important role in the immunological response of the gut[29]. Up to now, there have been no published studies assessing changes in gut microflora due to smoking. Our data showed that exposure to side-stream smoking altered the composition of cecal microflora, reducing Fermicutes and Enterobacteriaceae. Both Fermicutes and Enterobacteriaceae belong to a group of bacteria contributing to fermentation and nutrient intake. Lactoccoci and other lactic acid bacteria are known to have anti-inflammatory effects[30-34]. The dramatic reduction of Lactoccoci in side-stream smoking mice indicates that Lactoccoci might not be responsible for the reduced inflammation in the gut of side-stream smoking mice. The reason for the reduction of Lactoccoci in cecal microflora due to smoking is unclear, but might be related to oxidative stress. Many Lactoccoci lack catalase and are sensitive to oxidative stress[54], which may render them less competitive in the oxidative environment induced by smoking. We also observed that MIB was increased while SFB was decreased in smoking mice. Because SFB is known to have important roles in maturation of the gut immune system, its reduction in smoking mice could be associated with the adverse effect of smoking on Crohn’s disease[55]. MIB refers to a group of bacteria called Cytophaga-Flavobacter-Bacteroides phylum[56], and their abundance in the gut is known to be altered by environmental factors[57]. The biological effect of MIB alteration due to smoking is unclear.

Despite its apparent harmful effects, side-stream smoking reduces the risk of inflammatory gastrointestinal diseases. Gut epithelial integrity and barrier function is a central predisposing factor to inflammatory bowel diseases. Local inflammation impairs the barrier function of gut epithelium. We hypothesized that side stream smoking may possess potent anti-inflammatory effects, which promote the expression of tight junction proteins in the intestine, exerting beneficial effects on the prevention of ulcerative colitis.

Epidemiologic studies indicate that smoking had a protective effect on ulcerative colitis though the underlying mechanisms remain elusive. In this study, we demonstrated that exposure to side-stream smoking inhibited mucosal inflammation, improved gut tight junction protein expression, and altered gut microflora composition in mice, which could partially explain the preventive effects of smoking on ulcerative colitis.

Recent epidemiologic studies have highlighted the preventive effect of smoking on ulcerative colitis. This is the first study to report that side-stream smoking has anti-inflammatory effect on gut mucosal, improving gut tight junction protein expression and altering gut microflora composition.

By understanding how side-stream smoking affects gut mucosal immune response and tight junction protein expression, the authors can develop alternative strategies to reduce the risk of ulcerative colitis and possibly other inflammatory bowel diseases without the harmful effects of smoking.

Inflammatory bowel diseases are characterized by chronic inflammation in the intestine. Side-stream smoking, mimicking secondhand smoking, has anti-inflammatory effect, which may be responsible for its beneficial effects against ulcerative colitis.

The authors address the observation that passive smoking decreases inflammatory response in large intestine. The authors are to be commended for excellent work in performing a very important and informative study. The experimental methods are well summarized and explained. The statistics are appropriate for this study.