Pancreatic schwannomas are rare neoplasms. Authors briefly describe a 64-year-old female patient with cystic pancreatic schwannoma mimicking other cystic tumors and review the literature. Databases for PubMed were searched for English-language articles from 1980 to 2010 using a list of keywords, as well as references from review articles. Only 41 articles, including 47 cases, have been reported in the English literature. The mean age was 55.7 years (range 20-87 years), with 45% of patients being male. Mean tumor size was 6.2 cm (range 1-20 cm). Tumor location was the head (40%), head and body (6%), body (21%), body and tail (15%), tail (4%), and uncinate process (13%). Thirty-four percent of patients exhibited solid tumors and 60% of patients exhibited cystic tumors. Treatment included pancreaticoduodenectomy (32%), distal pancreatectomy (21%), enucleation (15%), unresectable (4%), refused operation (2%) and the detail of resection was not specified in 26% of patients. No patients died of disease with a mean follow-up of 15.7 mo (range 3-65 mo), although 5 (11%) patients had a malignancy. The tumor size was significantly related to malignant tumor (13.8 ± 6.2 cm for malignancy vs 5.5 ± 4.4 cm for benign, P = 0.001) and cystic formation (7.9 ± 5.9 cm for cystic tumor vs 3.9 ± 2.4 cm for solid tumor, P = 0.005). The preoperative diagnosis of pancreatic schwannoma remains difficult. Cystic pancreatic schwannomas should be considered in the differential diagnosis of cystic neoplasms and pseudocysts. In our case, intraoperative frozen section confirmed the diagnosis of a schwannoma. Simple enucleation may be adequate, if this is possible.

Pancreatic schwannomas are rare neoplasms that originate from Schwann cells. The Schwann cells line the nerve sheath and can generate either schwannoma or neurofibroma[1]. Schwannoma usually occur in the extremities, but can also be found in the trunk, head and neck, retroperitoneum, mediastinum, pelvis and rectum[2,3]. Pancreatic schwannomas are even more unusual neoplasms that affect adults with an equal gender distribution[4,5]. These tumors vary considerably in size and approximately two-thirds are reported to undergo degenerative changes including cyst formation, calcification, hemorrhage, hyalinization and xanthomatous infiltration[4,5]. As a result, they may radiographically mimic cystic pancreatic lesions (e.g., mucinous cystic neoplasms, solid and pseudopapillary neoplasms, serous cystic neoplasms, and pseudocysts).

Only 47 cases have been reported in the English literature in the last three decades[2-42]. In this report, we present a case of pancreatic schwannoma and provide a pertinent review of literature with emphasis on clinical presentation, diagnosis, treatment options, and outcome.

A 64-year-old previously healthy woman was incidentally discovered to have a cystic tumor in the pancreas during an ultrasound examination for a health check. She was referred to our institution for further investigation. The abdominal physical examination did not detect any marked finding and all laboratory data were normal, including tumor markers. The computed tomography (CT) scan demonstrated a well-encapsulated tumor, which was composed of solid and cystic areas (Figure 1), and neither liver mass nor peripancreatic lymph node swelling was detected. Magnetic resonance imaging (MRI) showed a mass, with hypointensity on T1-weighted images and hyperintensity on T2-weighted images. Magnetic resonance cholangiopancreatography (MRCP) showed a hyperintense mass in the pancreatic head with no dilatation of the main pancreatic duct. Endoscopic retrograde cholangiopancreatography revealed no communication between cystic tumor and pancreatic duct. Endoscopic ultrasonography showed that the tumor was composed of cystic part and solid part. We performed surgery under the diagnosis of cystic tumor of the pancreas as mucinous cystic tumor, solid pseudo papillary tumor or gastrointestinal stromal tumor. The laparotomy disclosed a well-encapsulated 4-cm mass in the uncinate process of the pancreas that had no signs of inflammation. Intraoperative ultrasound confirmed a solitary mass composed of solid and cystic components (Figure 2). The mass was enucleated and an intraoperative frozen section demonstrated a benign schwannoma. No further resection was performed based on these findings. The tumor was 4 cm × 4 cm × 3 cm in size, and was composed of a mixture of solid and hemorrhage areas. On microscopic examination, the tumor was composed of spindle cells strongly positive for S-100 proteins and foci of hemorrhage (hematoxylin and eosin, × 100) (Figure 3). The tumor cells were negative for smooth muscle actin and CD-34. The tumor was therefore histologically diagnosed as benign schwannoma. The patient was discharged uneventfully on postoperative day 17. At a 65-month follow up after resection, the patient is doing well without any recurrent disease. 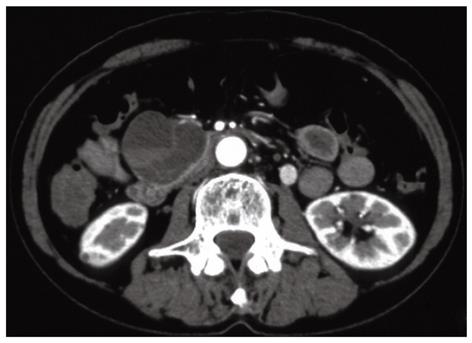 Figure 1 Contrast-enhanced computed tomography scan obtained in the arterial phase showing a multilocular cystic mass in the uncinate process of the pancreas. No pancreatic ductal dilatation or invasion into adjacent arteries or portal vein are identified. 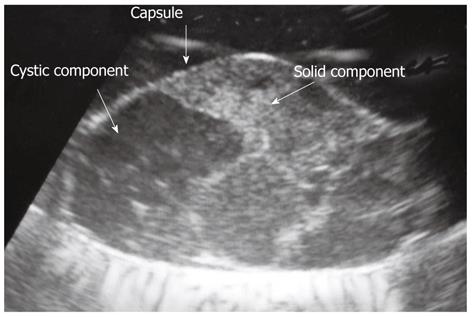 Figure 2 Intraoperative ultrasound showing the well-encapsulated pancreatic mass that is composed of solid and cystic components. 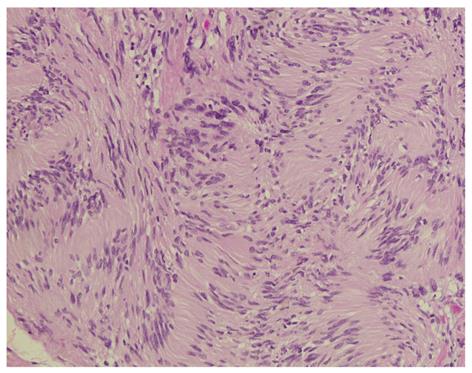 A review of the patient’s chart was performed along with a review of English-language articles using a PubMed search for the last three decades. We found 41 articles including 47 patients with pancreatic schwannoma. Details of the cases are summarized in Table 1 along with the current patient. Table 2 summarizes the important available facts regarding all patients. We examined the correlation between tumor size and malignancy, as well as tumor size and cystic degeneration. Continuous data are presented as mean ± standard deviation and range. Student t-test was used for all comparisons among continuous variables. A P < 0.05 was considered statistically significant. 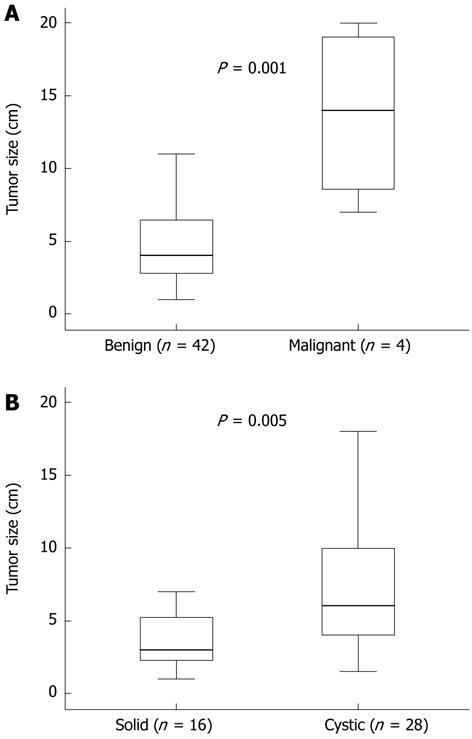 In 1910, Verocay reported a schwannoma as a true neoplasm which originated from Schwann cells, and which did not contain neuroganglion cells[1]. Since then, schwannomas have become well known as benign spindle cell tumors derived from Schwann cells that line the nerve sheaths. Schwannomas usually occur in the extremities, but can also be found in the trunk, head and neck, retroperitoneum, mediastinum, pelvis and rectum[2-4]. Pancreatic schwannomas are rare neoplasms that arise from either autonomic sympathetic or parasympathetic fibers, both of which course through the pancreas as branches of the vagus nerve[2-4].

Microscopically, a typical schwannoma is composed of 2 areas, namely Antoni A and Antoni B areas. The Antoni A area is hypercellular and characterized by closely packed spindle cells with occasional nuclear palisading and Verocay bodies, whereas the Antoni B area is hypocellular and is occupied by loosely arranged tumor cells[43]. Most of the pancreatic schwannomas reported had both Antoni A and Antoni B areas in various proportions. Degenerative or cystic changes such as calcification or hemorrhage are often recognized in the Antoni B area. These changes result from vascular thrombosis and subsequent necrosis[43]. Cystic pancreatic schwannomas can mimic the whole spectrum of cystic pancreatic lesions including: intraductal mucinous-papillary neoplasms, mucinous cystic neoplasms, serous cystic neoplasms, solid and pseudo-papillary neoplasms, lymphangiomas, and pancreatic pseudocysts. Immunohistochemically, schwannomas stain strongly positive for S-100 protein, vimentin and CD 56, while negative for other tumor markers including cytokeratin AE1/AE3, desmin, smooth muscle myosin, CD 34 and CD 117[43].

The symptoms of the reported patient cases of pancreatic schwannoma vary. Seventy percent of patients were symptomatic. Abdominal pain was the most common symptom reported (57%). Symptoms such as back pain (6%), nausea/vomiting (4%), weight loss (13%), melena (4%) and jaundice (4%) have been also reported. Thirty percent of patients were asymptomatic and the lesions were incidentally discovered on CT scans performed for other reasons.

reviewed imaging features of pancreatic schwannomas. The most characteristic feature on CT scan was the presence of an area of low density and/or cystic images reflecting the Antoni B component or degenerative cystic areas of the schwannoma. Contrast-enhanced CT scan showed the difference between the Antoni A and the Antoni B areas based on their vascularity, i.e., well-enhanced areas corresponding to Antoni A, and unenhanced areas corresponding to Antoni B. The CT findings correlated well with pathological features[8,19]. The MRI findings usually showed hypointensity on T1-weighted images and hyperintensity on T2-weighted images[21]. However, other pancreatic tumors often share those imaging features, and differential diagnoses should always be considered. Ultrasound-guided Fine Needle Aspiration (EUS-FNA) biopsy has been used increasingly commonly at many institutions. This procedure may be useful for accurate preoperative diagnosis. Cytologically, schwannomas are characteristically composed of spindle-shaped cells, which possess indistinct cytoplasmic borders and wavy nuclei embedded in a fibrillary and occasionally myxoid or collagenous matrix. The Antoni A (cohesive cellular clusters) and Antoni B (loosely cohesive or poorly cellular sheets) areas are occasionally found. Immunohistochemical staining is useful for accurate diagnosis of schwannoma[12,14]. It is diffusely and strongly positive for S-100 protein. There has only been one previous report of pancreatic schwannoma diagnosed preoperatively by EUS-FNA cytology combined with immunohistochemistry[12].

Although malignant pancreatic schwannomas have been reported in 5 articles[7,38,40-42], in 3 of 5 the methods of diagnosing malignancy were inconsistent, as some previous reports pointed out[4,5]. Immunohistochemical examination was not used or was not available in these 3 patients. Walsh and Bradspigel[40] described a case of pancreatic schwannoma eroding into the bowel wall and presenting with gastrointestinal bleeding that mimicked a recurrently bleeding duodenal ulcer. Another two patients reported had disease associated with von Recklinghausen’s disease[41,42]. These could represent misdiagnosed neurofibromas that underwent malignant degeneration[4,5]. Stojanovic et al[7] reported malignant pancreatic schwannoma with node metastasis and infiltrating serosa of transverse colon. This tumor was confirmed using immunohistochemical examination. This may be the first definite report of malignant schwannoma with subsequent radical resection.

Since malignant transformation of pancreatic schwannomas is uncommon, simple enucleation is usually sufficient. A review of the treatment showed that the most common resection was pancreaticoduodenectomy (32%), followed by distal pancreatectomy (21%) and enucleation (15%). This result may account for the difficulty in accurate diagnosis of pancreatic schwannoma and relate to larger size of this tumor. Enucleation was performed for 7 patients for whom 3 lesions were located in the head, 2 lesions were in the uncinate process and 2 lesions were in the body. The mean tumor size of the patients who underwent enucleation was 2.7 cm (range 1.5-4.0 cm). Intraoperative consultation with the pathologist was carried out in most of the enucleated cases. An intraoperative frozen section should be performed, as it helps to establish the diagnosis of a benign schwannoma and avoid more radical resection. Large tumors, tumors involving portal vein, ampulla, or splenic hilum, may require a more radical resection than simple enucleation.

The present report shows the correlation between tumor size and malignant formation (Figure 4A), and tumor size and cystic degeneration (Figure 4B). Malignant schwannomas were more likely to be larger-sized compared to many other tumors. On the other hand, the particular feature of pancreatic schwannoma was that larger tumor size was related to cystic degeneration, as shown in Figure 4B. Cystic degeneration could make it difficult to diagnose pancreatic schwannoma preoperatively, because of mimicking other cystic neoplasms. Caution should be applied when diagnosing cystic neoplasm. An intraoperative frozen section may help to establish the diagnosis of a schwannoma and avoid more radical resection. To our knowledge, the present report is the first to analyze the relation among tumor size, malignant formation and cystic degeneration. Our results suggest that pancreatic schwannoma might be resected even though diagnosed preoperatively, because if schwannomas are smaller, enucleation should be oncologically adequate. However, when tumors become larger with associated bleeding risk, more invasive resection such a PD or DP might be necessary. In particular, in cases of tumors more than 10 cm in size, we should pay special attention to malignant degeneration and should perform a more extended resection. To avoid extended resection, earlier resection and accurate diagnosis are very important.

In conclusion, pancreatic schwannomas deserve attention with regard to the differential diagnosis of pancreatic lesions. Preoperative diagnosis is very difficult. Simple enucleation is adequate if this is possible to achieve. Intraoperative frozen section is useful to diagnose schwannoma.