AIM: To investigate the effects of curcumin on gastric microcirculation and inflammation in rats with indomethacin-induced gastric damage.

CONCLUSION: The results indicate that curcumin prevents indomethacin-induced gastropathy through the improvement of gastric microcirculation by attenuating the level of ICAM-1 and TNF-α.

Nonsteroidal anti-inflammatory drugs (NSAIDs) are among the most commonly prescribed medications worldwide. However, NSAIDs have adverse effects on the gastric mucosa, resulting in various clinical presentations, ranging from nonspecific dyspepsia to ulceration, upper gastrointestinal bleeding, and death, summarized by the term “NSAID gastropathy”[1]. NSAIDs-induced gastric damage is the major side effect of this kind of drug[2].

Animal studies have shown that neutrophil adherence to the endothelium of the gastric microcirculation is critical in NSAIDs injury[7]. Neutrophil adherence damages the mucosa by producing oxygen-free radicals, releasing proteases, and obstructing capillary blood flow. NSAIDs might induce the synthesis of tumor necrosis factor (TNF)-α and leukotrienes[8,9]. These inflammatory mediators subsequently stimulate neutrophil adherence by the upregulation of adhesion molecules[10].

NSAID administration in rats caused a rapid and significant increase in adhesion between neutrophils and vascular endothelial cells in both gastric and mesenteric venules[11-13]. This was dependent on intercellular adhesion molecule (ICAM)-1 expression on the endothelium and CD11/CD18 expression on the leukocyte[14,15]. Interestingly, Andrews et al[10] recently reported that administration of aspirin or indomethacin to rats resulted in a significant increase in ICAM-1 expression in the gastric microcirculation.

Curcuma, a genus in the plant family of Zingiberacea, is the biological source for curcuminoids, including curcumin. Curcuma longa, the yellow tuberous root referred to as turmeric, was taken from India to Southeast Asia[16]. The yellow pigmented fraction of Curcuma longa contains curcuminoids, which are chemically related to its principal ingredient, curcumin[16]. It possesses a broad range of pharmacological activities, including antioxidant, anti-carcinogenic, wound-healing, and anti-inflammatory effects[17-19]. There are currently limited studies investigating the effect of curcumin on NSAIDs-induced gastric damage. The aim of this study was to investigate the anti-inflammation effect of curcumin on indomethacin-induced gastric damage in rats.

After 8 h 30 min, animals were anesthetized with intraperitoneal injection of thiopental (50 mg/kg body weight). After tracheostomy, the carotid artery and jugular vein were cannulated for blood pressure measurement using a polygraph and for the administration of a fluorescent marker; acridine orange was infused intravenously (Sigma chemical Co., United States, 0.5 mg/kg BW/min). The abdominal wall was incised and the stomach was extended and fixed. Leukocyte adherence in the stomach was observed by intravital fluorescence microscopy. At the end of the experiment, blood samples were collected for ICAM-1 and TNF-α determination using enzyme linked immunosorbent assay (ELISA) methods. The stomach was cut and fixed in 10% formalin solution to inspect the histopathology.

After the experiment, blood samples were taken by cardiac puncture, and allowed to clot overnight before centrifuging at approximately 2000 ×g. Serum was stored at -80 °C for determining ICAM-1 and TNF-α levels by ELISA kit (R and D systems).

Samples of the stomach were excised and transferred to formalin. The samples were subsequently processed by routine techniques before embedding in paraffin. Sections were cut at the thickness of 5 μm and stained with hematoxylin and eosin (HE), as previously described[20]. One pathologist performed all the histopathological examinations. All histopathological changes were observed under a light microscope. The neutrophil infiltration score in each section was graded according previously determined criteria[21].

All data were presented as mean ± SD. To compare data among all groups of animals, one-way analysis of variance (one-way ANOVA) and Duncan comparisons were employed. All statistical tests were performed using SPSS for Windows version 13.0 (SPSS Inc., Chicago, IL, United States). Differences were considered statistically significant at P < 0.05.

After gastric injury was induced by the administration of indomethacin, leukocyte adherence to endothelial cells of postcapillary venules (15-30 μm in diameter) was observed under intravital fluorescence microscopy, 10-15 min after acridine orange injection (Figure 2). The number of leukocytes adhering to postcapillary venules for 30 s or longer was counted. The mean number of leukocyte adherences in the IMN group without curcumin treatment was significantly higher than in the control group (6.40 ± 2.30 cells/frame vs 1.20 ± 0.83 cells/frame, P = 0.001). 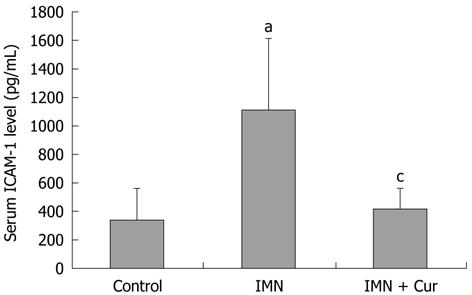 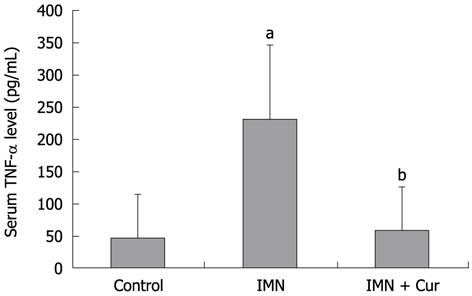 In the present study, we investigated the effects of curcumin on indomethacin-induced gastric damage in rats. The results clearly demonstrated that curcumin administration prevented the ulcerogenic effect of indomethacin, possibly through its anti-inflammatory action. Evidence suggests that NSAIDs-induced gastric ulceration is a neutrophil-dependent process. NSAIDs administration to rats caused a rapid and significant increase in adhesion between neutrophils and vascular endothelial cells in both the gastric and mesenteric venules[11,12]. Indeed, monoclonal antibodies that blocked NSAID-induced neutrophil adherence to vascular endothelium could significantly alleviate NSAID- induced gastric mucosal injury[7,15,22]. Neutrophils play an important role in the development of inflammation and tissue injury by releasing a variety of inflammatory mediators[23,24]. These inflammatory mediators are capable of producing tissue injury; therefore, they may be involved in the pathogenesis of indomethacin-induced gastric mucosal injury[25]. Furthermore, adhesion molecules expressed on activated neutrophils, such as CD11b and CD18, have been shown to play an important role in neutrophil-induced tissue injury[14].

Moreover, NSAIDS are believed to have the effect on nuclear translocation of nuclear factor (NF)-κB, which modulates the expression of several adhesions molecules, including ICAM-1[26]. ICAM-1, one of the major adhesion molecules, plays a pivotal role in the inflammatory reaction by increasing leukocyte adhesion to endothelium and promoting transendothelial migration of leukocytes to inflammatory sites[27]. Another important mechanism that induces ICAM-1 expression is the increment of TNF-α levels[27,28]. The inhibitory effect of NSAIDs on COX-2 leads reduced prostaglandin E2 (PGE2) levels. Thus, TNF-α production, which is normally inhibited by PGE2, increases[28]. TNF-α is an important mediator causing NSAIDs induced gastropathy. Apart from its effect on adhesion molecules, TNF-α may have the ability to activate pro-apoptosis caspases, which regulate gastric epithelial cells apoptosis in NSAID-treated rats[27].

A previous study demonstrated that indomethacin administration caused significantly elevated TNF-α levels in rats[8]. Moreover, pretreatment with anti- TNF-α, dexamethasone, and PGE2 could prevent the increases in gastric mucosal injuries and TNF-α levels. Similarly, we found significant rises in TNF-α and ICAM-1 levels in the serum of the indomethacin-treated group compared to the control. Other formulations of NSAIDs could also increase TNF- α production. A study by Jainu et al[29] noted a significant increase in TNF-α, IL-1β and NOS-2 activity in aspirin-administered rats. The elevations of inflammatory mediators and adhesion molecules in serum correlated with the pathological findings of gastric mucosa and the numbers of adhered leukocytes in the gastric microcirculation. These were also true for curcumin-treated group. Pretreatment with curcumin could significantly reduce TNF-α and ICAM-1 levels in the serum, accompanied by an improvement in gastric mucosal inflammation and leukocyte adhesion.

Curcumin, a substance rich in phenolics, is known to possess antioxidant properties. Curcumin reduces gastric injury induced by NSAIDs[30]. It has been reported that curcumin can decrease gastric injury by preventing the peroxidase inactivation effect of indomethacin and scavenging reactive oxygen produced by this enzyme[30]. Several studies showed that curcumin is also an anti-inflammatory substance, with an inhibitory effect on transcription factor NF-κB activation. NF-κB is required for the expression of many genes linked with the host immune response, such as ICAM-1, TNF-α, IL-1β, and iNOS[31]. Cytoplasmic NF-κB is complexed with its inhibitor IkB and is, therefore, inactive. The cytokine-mediated activation of NF-κB requires activation of various kinases, which ultimately leads to the phosphorylation and degradation of IkB. Several beneficial effects of curcumin are consistent with its ability to inhibit the activity of NF-κB[32-34]. Singh et al[31] observed that curcumin inhibited NF-κB activation pathway after the convergence of various stimuli mediated by protein tyrosine kinase, protein kinase, and ubiquitin conjugation enzymes, but before the phosphorylation and subsequent release of IkB complexed to NF-κB. Jobin et al[35] and Plummer et al[36] examined the modulatory potential of curcumin on NF-κB signaling pathways and found that curcumin prevented phosphorylation of IkB by inhibiting the activation of IkB-kinase (IKKs). Our previous study demonstrated that Helicobacter pylori-induced gastric inflammation in rats is associated with increased NF-κB activation and macromolecular leakage, which can be reduced by curcumin[37]. In this study, 200 mg/kg curcumin was a sufficient dose for reducing gastric epithelial NF-κB p65 expression and mucosal macromolecular leakage. Despite its inconclusive mechanism of action, we clearly demonstrated that curcumin has a protective and beneficial effect on NSAIDs-induced gastropathy in rats. Further studies on the expression of inflammatory mediators and adhesion molecules in the gastric mucosa are necessary to demonstrate the exact curative effect of curcumin on NSAID-induced gastric pathology. Clinical studies might also be needed to verify the protective effect of curcumin in humans.

In conclusion, NSAIDs could induce gastric injury through increases in inflammatory cytokines and leukocyte adhesions. Curcumin, an anti-oxidant herbal substance, could prevent these adverse events and might be used as a preventive method for NSAIDs-induced gastropathy.

Nonsteroidal anti-inflammatory drugs (NSAIDs)-induced gastric damage is the major side effect of this kind of medication. Although the underlying pathogenesis of NSAIDs-induced gastric damage is unclear, neutrophils are believed to play an important role in the development of gastric inflammation and injury following NSAID administration. Curcumin possesses several biological activities, including an anti-inflammatory effect. Authors postulated that curcumin, acting through nuclear factor (NF)-κB inhibition, could reduce the production of adhesion molecules and inflammatory cytokines, resulting in the amelioration of gastric injury in NSAIDs-induced gastropathy in rats.

Curcumin (diferuloylmethane) is an active ingredient of Curcuma longa (turmeric), which exerts many biological activities by the inhibition of NF-κB-mediated reactions. NSAIDs can cause gastric mucosal damage through an increase in leukocyte-endothelial adhesions and the release of inflammatory mediators, leading to the free radical production. This study demonstrated an improvement in gastric mucosal damage and decreases in leukocyte adhesions, and intercellular adhesion molecule 1 and tumor necrosis factor (TNF)-α production after curcumin administration in the indomethacin-treated group.

The previous study showed that curcumin is an anti-inflammatory agent and can inhibit NF-κB activation in an in vitro study. However, it is not known whether curcumin’s anti-inflammatory effects will help prevent NSAIDs-induced gastropathy in vivo. In this study, authors investigated the protective effect of curcumin in indomethacin-induced gastric damage in rats. Authors found that curcumin could alleviate indomethacin-induced gastric injury via a decrease in leukocyte adhesions and TNF-α production.

Curcumin might be used as a new protective agent for NSAIDs-induced gastric damage in clinical use.

This is an interesting study of the effects of curcumin on indomethacin-induced gastric damage in rats. The results clearly demonstrated that curcumin administration prevented the ulcerogenic effect of indomethacin, possibly through its anti-inflammatory action.