AIM: To evaluate the role of endoscopic stenting with or without concurrent 3-dimensional conformal chemoradiotherapy (3D-CRT) in patients with inoperable esophageal cancer.

METHODS: Advanced esophageal cancer patients indicated for esophagectomy received esophageal stents. A part of patients completed 3D-CRT after stenting. Efficacy was assessed by endoscopy and computed tomographic scan before and 4 wk after completion of the treatment. The median survival, 3D-CRT toxicity and complications were compared between 3D-CRT and control groups.

Esophageal cancer is one of the most common malignant tumors with a high mortality rate in almost a half of the cases, and is the fourth leading cause of cancer-related deaths in China[1,2]. Most patients have been already in an advanced stage at the diagnosis of this aggressive malignancy. At least 60% of patients are unsuitable for surgical resection either due to the advanced stage or their comorbidity[3]. At this stage, esophageal carcinoma has infiltrated surrounding tissues and caused esophageal stenosis, and even esophagotracheal fistula in some cases. These patients could only be treated with palliative procedures which play an important role in improving the patient’s life quality. The current palliative means include radiotherapy, chemotherapy and esophageal stent placement. However, esophagitis is usually unavoidable after radiotherapy, and once esophagitis occurred, dysphagia would be exacerbated[4]. Some patients even can not swallow liquid diet, some can not endure the chemotherapy and radiotherapy for their poor nutritional status. Stents placement has become a safe and effective palliation for dysphagia due to malignant esophageal obstruction or strictures after radiotherapy[5]. A randomized trial demonstrated that the combination of endoscopic stenting with additional radiation and chemotherapy could improve the survival of advanced esophageal cancer patients[6,7]. We evaluated the feasibility and efficacy of esophageal stenting combined with simultaneous radiotherapy and chemotherapy in the treatment of advanced esophageal cancer.

All esophageal cancer patients treated in Qingdao Municipal Hospital from January 1999 to September 2008 were identified. The care of esophageal cancer patients was planned under the auspices of a multidisciplinary gastrointestinal disease management team which includes surgical oncologists, medical oncologists, gastroenterologists, pathologists, interventional radiologists, and radiation oncologists. This study was approved by the Ethics Committee of our institution and informed consent was obtained from all the patients before enrollment.

Clinical staging was performed with endoscopy and endoscopic ultrasound and computed tomography (CT). The tumor, node, metastasis and staging classification used for this analysis were defined according to the American Joint Committee on Cancer staging system version 6.0[8].

Inclusion criteria for the study were: (1) esophageal cancer at stage III or IV unsuitable for esophagectomy; (2) symptoms of dysphagia ≥ grade 3 (Table 1); (3) tumors were mainly located in the esophagus; (4) adequate bone marrow (white blood cell > 3.5 × 109/L, hemoglobin > 90 g/L, platelet count > 100 × 109/L), and hepatic (bilirubin 1.5 times the upper limit of the normal value) and renal functions (calculated creatinine clearance > 50 mL/min or creatinine < 2 mg/dL) were examined before administration of chemotherapy; (5) a minimum life expectancy of 5 mo; and (6) stay in hospital during the entire chemoradiotherapy treatment course.

Patients were excluded because: (1) with tumors predominantly located in the stomach; (2) with prior treatment, including surgery, chemotherapy, or radiotherapy; and (3) with tumors infiltrating the tracheobronchial tree found on CT.

The procedure was performed under local anesthetic spray, with intravenous sedation when required. Endoscopy was done to determine precisely the site and length of stenosis. All patients with strictures underwent dilatation with 12-14 mm flexible rubber Savary-Guillard dilators before stent placement. Once this stricture was successfully dilated, a distal hemoclip (resolution clip, Boston Scientific, United States) was placed 2 cm below the area of stricture. Then endoscope was advanced farther and a flexible guidewire was placed into the second portion of the duodenum. The covered self-expanding Titanium Nickel alloy mesh stent (MTN, Nanjing Microinvasive Medical Inco., Nanjing, China) has a polyester at its midsection and its proximal end is flared to a diameter of 25 mm. The stent was loaded onto a dedicated applicator (12-14 mm depending on the diameter of stent) with an atraumatic dilator tip and was placed under continuous fluoroscopic guidance using the distal hemoclip as a mark. The length chosen was at least 2 cm longer than the stenosis. An 18 mm-diameter stent was used for severe strictures; and a 21 mm-diameter stent was used for moderate strictures.

Three-dimensional conformal chemoradiotherapy (3D-CRT) protocol was used. CT scans displayed isodose distributions and directly obtain dose-volume histograms. The primary tumors as well as the loco-regional lymph nodes were irradiated with an International Commission on Radiation Units and Measurements reference dose of 45.0 Gy in 25 fractions with 1.8 Gy/d using a LINAC 6-MV X-ray unit (Varian, CA, United States), and the total dose was adjusted according to patients’ tolerance. Chemotherapy regimens consisted of cisplatin 60 mg/m2 infusion on day 1 and day 22, plus continuous infusion of 5-fluorouracil at 200 mg/m2 per day from day 1 to day 42.

The clinical response to treatment was categorized as a clinically complete response (CR), partial response (PR), stable disease (SD), or progressive disease (PD). CR was defined as the disappearance of all clinically detectable lesions; CR of primary tumors was defined as the disappearance of all visible lesions, including ulceration, with no microscopic evidence of tumor in randomly obtained biopsy specimens from the previous lesion sites. PR was defined as either a reduction exceeding 50% of the initial sizes (products of dimensions) of all measurable tumors according to CT or esophagraphy. A new lesion or more than a 25% increase of the original tumor size was defined as PD. All other conditions were categorized as SD. Chest CT was repeated every 4 wk to assess the response of the tumor. Endoscopy or abdominal CT was repeated if necessary.

Among the 146 patients who were diagnosed as having inoperable esophageal cancer, 111 (76.0%) were eligible for treatment with palliative 3D-CRT. Nine patients did not complete 3D-CRT because of disease progression. One patient died of severe bleeding 12 d after 3D-CRT. Two patients developed febrile neutropenia, and stopped the chemotherapy. Thirty-two patients did not undergo 3D-CRT after stents placement because their preference, these patients were regarded as the control group. Sixty-seven patients completed the 3D-CRT segment with a total radiation dose over 40Gy. Among these patients, 38 received 40Gy, and 29 received 50-55Gy. These patients were enrolled as the 3D-CRT treatment group. The clinical and demographic characteristics of the patients in 3D-CRT and control groups are shown in Table 2. There was no obvious difference in the dysphagia grade, tumor type, tumor stage and tumor size between the two groups. 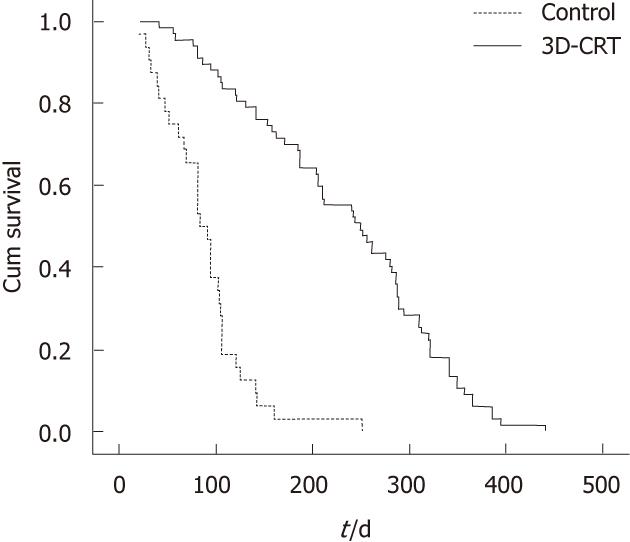 About more than 90% of esophageal cancer patients are not clinically identified until at an advanced stage, their prognosis is the poorest among the patients with digestive carcinomas, with a 5-year survival rate below 10%[1]. Because of malnourishment due to comorbid conditions in advanced carcinoma, more than 50% of esophageal cancer cases are unresectable[9]. A case-control study showed that the median survival time for patients with advanced esophageal cancer was only 3-5 mo[10]. However, once these inoperable patients’ physical condition was permitted, effective therapies should be performed. No matter which therapy is used, the primary purpose is to prolong the patients’ survival time and improve their quality of life. In this study, we relieved the dysphagia with minimal morbidity and mortality, and then choose the suitable management to prolong the patients’ life span and improve their quality of life.

Recently, 3D-CRT appeared to be a promising treatment even for esophageal carcinoma patients with distant metastasis[11]. Because CDDP and 5-FU have synergistic effects and also act as radiosensitizers, these agents were considered to be particularly effective in combination with radiotherapy[12].

In our study, we focused on the 3D-CRT effectiveness in the inoperable esophageal cancer patients. Ten years ago, we could only place stents to palliate dysphagia among these patients. And in recent years after stents placement, 3D-CRT could be performed as long as patient’s physical condition allowed, and whenever their dysphagia was relieved, the malnutrition of the patients was ameliorated. For these inoperable patients, esophageal stents placement not only improved their quality of life, but made the 3D-CRT completion possible as well. In our study, compared with the patients treated with stenting only, at least 25% of the inoperable patients after 3D-CRT survived 1-year, and their six-month survival rate was also higher. 3D-CRT could reduce the tumor volume and improve Karnofsky Performance Status in the inoperable patients. Combined with 3D-CRT, it seemed that the esophageal stent placement is the adjuvant therapy with CRT. We found that stenting combined with 3D-CRT could improve the inoperable patients’ quality of life, and prolong their survival. Fietkau[4] thought that simultaneous CRT should be considered as the standard treatment for inoperable carcinoma of the esophagus with the median survival time between 13 and 18 mo. The reason why Fietkau’s result[4] was better than ours may be that there were more inoperable stage III/IV patients in our study as compared with the stage II/III patients in Fietkau’s study.

3D provides the superior dose distributions in the target volume with markedly reduced morbidity to the surrounding normal tissues. Minsky found that increasing the percutaneous radiation dose from 50.4 to 64.8 Gy did not result in better survival[13]. Part of the patients in our study received radiation dose of less 40Gy due to the complications such as perforation or esophagitis. Although there is still no consensus of the optimal dose of radiation within the framework of simultaneous RCT, there has been a common opinion that the higher dose of radiation the more therapy-related deaths. In our study, our therapeutic purposes were not to remit or downstage the tumor, but to alleviate the pain and improve the quality of life of the patients. Moreover, 3D-CRT with covered metal stenting would cause a relatively higher rate of late complications such as stent migration, hemorrhage, and gastroesophageal mucosal prolapse. The results from some studies about the safety of self-expandable metallic stents for patients who have undergone chemoradiotherapy were controversial[14-16]. Therefore, more studies should be conducted.

In our study, there was no difference of complications such as perforation, shift and brush off of stent and pectoralgia between the 3D-CRT group and the control group with only stenting. Because we did not determine whether lymph node metastasis occurred in these patients without biopsies from esophagectomy, we did not compare the patients with and without lymph node metastasis. Those who could not be treated by 3D-CRT due to poor physical conditions served as controls, and there might be selection bias in this study.

In this study, once the dysphagia in advanced esophageal cancer patients was alleviated, concurrent 3D-CRT was carried out. 3D-CRT combined with esophageal stenting could improve the symptoms of dysphagia in patients with inoperable esophageal carcinoma and could prolong their survival as well.

This study showed that self-expandable metallic stent placement with concurrent 3D-CRT could improve the symptoms of dysphagia and result in better survival as compared with endoscopic stenting used alone in the patients with inoperable esophageal carcinoma.

The combined treatment of endoscopic stenting and 3D-CR could be applied in patients with inoperable advanced esophageal cancer.

Three-dimensional conformal chemoradiotherapy (3D-CRT) is a mode of high precision radiotherapy. It is a complex process that begins with the creation of individualized, 3D digital data sets of patient tumors and normal adjacent anatomy. These data sets are then used to generate 3D computer images and to develop complex plans to deliver highly “conformed” (focused) radiation while sparing normal adjacent tissues. The radiation beam could focus on a higher radiation dose to the tumor while minimizing radiation exposure to healthy cells.