AIM: To evaluate the relationship between liver stiffness and duration of infection in blood transfusion-associated hepatitis C virus (HCV) patients with or without hepatocellular carcinoma (HCC).

METHODS: Between December 2006 and June 2008, a total of 524 transfusion-associated HCV-RNA positive patients with or without HCC were enrolled. Liver stiffness was obtained noninvasively by using Fibroscan (Echosens, Paris, France). The date of blood transfusion was obtained by interview. Duration of infection was derived from the interval between the date of blood transfusion and the date of liver stiffness measurement (LSM). Patients were stratified into four groups based on the duration of infection (17-29 years; 30-39 years; 40-49 years; and 50-70 years). The difference in liver stiffness between patients with and without HCC was assessed in each group. Multiple linear regression analysis was used to determine the factors associated with liver stiffness.

CONCLUSION: Although liver stiffness gradually increases over time, HCC develops in patients with high stiffness value regardless of the duration of infection.

Hepatitis C virus (HCV) is a leading cause of chronic liver diseases, presenting serious public health problems worldwide[1,2]. HCV infection generally shows an asymptomatic onset and slow fibrosis progression, with cirrhosis developing after 20-50 years[3-7]. Progression of disease is known to depend on patients’ characteristics at the onset of infection[8-12]. Infection at old age, male gender and heavy alcohol consumption are reported to be independently associated with rapid disease progression.

The onset of HCV infection can be reliably estimated in transfusion-associated chronic hepatitis C patients, in contrast to repeating injecting-drug users. In Japan, about 40% of chronic hepatitis C patients and HCV-related HCC patients have a history of blood transfusion typically in 1950s and 1960s[13], when blood supply depended on paid blood donors. Not a few of the blood donors were also injecting-drug users, mainly methamphetamine, among whom HCV spread first after the end of World War II. Viral spread started to decline in Japan after commercial blood banks were entirely abolished in 1969[14].

Chronic hepatitis C with cirrhosis is a strong risk factor for hepatocellular carcinoma (HCC)[15,16]. It has been shown that the risk of HCC increases with the degree of liver fibrosis[17]. Until recently, however, the degree of liver fibrosis could be reliably assessed only with liver biopsy, an invasive procedure with the possibility of serious complications[18,19].

Liver stiffness, which can be noninvasively measured with transient elastography, has been recently reported to be well correlated with histologically assessed liver fibrosis stage[20]. We previously reported that liver stiffness is strongly associated with the risk of HCC[21,22]. The calculated stratum-specific likelihood ratio indicated that the post-test odds for the presence of HCC increase five-fold when liver stiffness is higher than 25 kPa and decrease to one-fifth when lower than 10 kPa. Furthermore, we have confirmed in a prospective study that liver stiffness is a significant risk factor for HCC development, together with male gender, clinical cirrhosis and serum albumin level. However, in those studies we did not fully consider the duration of HCV infection and the age at the onset of infection, which are indicated in several studies to be associated with disease progression.

The aim of this study is to evaluate the association between liver stiffness and the duration of infection in blood transfusion-associated hepatitis C patients with and without HCC, focusing on the risk of HCC development.

This study conformed to the ethical guideline of the 1975 Helsinki Declaration and the ethical guidelines for epidemiologic research designed by Japanese Ministry of Education, Culture, Sports, Science and Technology and Ministry of Health, Labor and Welfare. The study design was approved by the ethics committee of the authors’ institution. Between December 2006 and June 2008, a total of 1562 patients positive for HCV RNA visited the liver clinic of authors’ institution. Among these patients, those with a history of receiving blood transfusion were consecutively enrolled (229 with HCC and 295 without). We excluded from the present study those patients with concomitant hepatitis B virus surface antigen positivity, patients with uncontrollable ascites, patients on interferon therapy, and patients who received multiple blood transfusions.

Liver stiffness was obtained noninvasively by using Fibroscan (Echosens, Paris, France), a newly developed medical device based on elastometry. Liver stiffness measurement (LSM) was considered valid only when at least eight acquisitions were successful with a success rate of at least 60% and the ratio of inter-quartile range (IQR) to the median value was larger than 30%.

In patients with HCC, the cancer was diagnosed by dynamic computed tomography (CT), where intrahepatic nodules with hyperattenuation in the arterial phase with washout in the late phase were considered as definite HCC[23,24]. Histopathological diagnosis, using ultrasound-guided biopsy samples, was also performed when required. In patients without HCC, the cancer was ruled out by ultrasonography. No HCC was detected in the subsequent six-month follow-up period among these patients.

We determined the following parameters on the day of LSM: serum albumin and total bilirubin concentrations, serum aspartate aminotransferase (AST) and alanine aminotransferase (ALT) levels, prothrombin activity and platelet count. Serogrouping of HCV was assessed by enzyme-linked immunosorbent assay (ELISA) (Immucheck F-HCV Gr Kokusai; Sysmex, Kobe, Japan)[25]. Based on the prevalence of each HCV genotype in Japan, serogroup 1 was assumed to represent genotype 1b and serogroup 2 to represent genotype 2a or 2b.

The correlation between liver stiffness and the interval from blood transfusion was assessed by Spearman’s rank correlation. The duration of infection was arbitrarily stratified into 4 groups, 17-29 years; 30-39 years; 40-49 years; and 50-70 years. The difference in liver stiffness according to the presence of HCC was assessed in each group. Multiple linear regression analysis was used to determine the factors associated with liver stiffness. Processing and analysis were performed by using the S-plus Version 7 (TIBCO Software Inc., Palo Alto, CA, United States).

A total of 524 patients underwent LSM. Eight patients were excluded because of unsuccessful measurements, mostly due to obesity (four patients had IQR/median > 30% and four had a success rate lower than 60%). Thus 516 patients were included in the current analysis (225 with HCC and 291 without). Their characteristics at the time of LSM are summarized in Table 1. The patients were 244 men and 272 women, with a mean age of 67.8 ± 9.5 years. The median liver stiffness was 14.3 kPa (25.8 in HCC group and 7.6 in non-HCC group). Figure 1 shows the frequency distribution of the year of receiving blood transfusion among the subjects. A peak is noted around the year 1960. 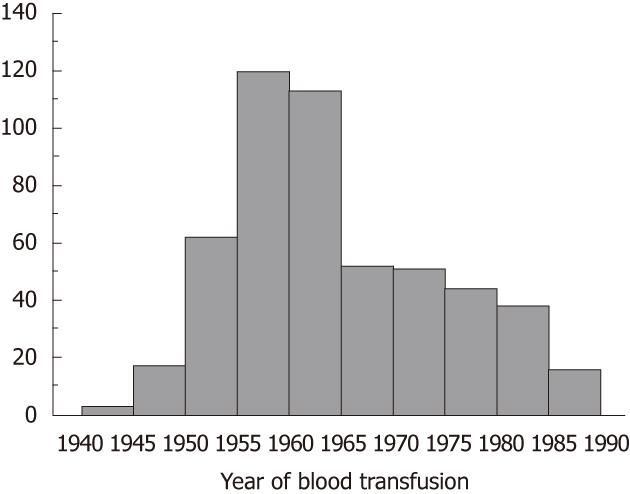 Figure 1 Frequency distribution of the year of receiving blood transfusion among the subjects. There is a peak around the year 1960.
Characteristics of patients according to the duration of infection

Characteristics of patients were compared between patients with and without HCC in each duration of infection group (Table 1). The patients who developed HCC in short duration of infection were male dominant, having low platelet count, with a history of heavier alcohol consumption, showing higher liver stiffness, and receiving blood transfusion at an older age.

Correlation between liver stiffness and duration of infection

The relationship between present liver stiffness and patients’ characteristics, i.e., the age at blood transfusion, duration of infection, gender, and alcohol consumption (alcohol > 50 g/d) was analyzed with multiple linear regression analysis. The results showed that the age at blood transfusion was positively correlated with liver stiffness, with a coefficient of +0.336 per year for kPa, P < 0.0001, independently of the duration of infection (coefficient +0.272 per year for kPa, P = 0.0015). This suggests that fibrosis progression is more rapid when infection is acquired at older ages. Alcohol consumption was also significantly correlated with a positive coefficient (coefficient +4.183 for kPa, P = 0.043).

Stiffness progression and the age at blood transfusion 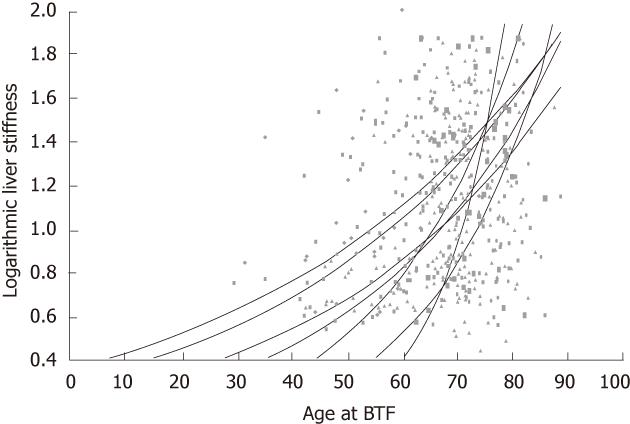 The progression rate of liver stiffness was assessed in subgroups according to three parameters (Figure 4). The progression rate was significantly higher in patients who were older than 40 at the time of blood transfusion (P < 0.0001), which is in accordance with the results of multiple regression. Heavy alcohol consumption (more than 50 g ethanol/d, P = 0.0308) and male gender (P = 0.0063) also showed significant difference by Mann-Whitney U test. There was no significant difference among HCV genotypes.

Figure 4 Liver stiffness progression rate. The progression rate is significantly higher in patients who were older than 40 at the time of blood transfusion, whose alcohol consumption is more than 50 g/d, and who are male. There is no significant difference according to hepatitis C virus (HCV) serotypes. Horizontal bar represents median value and 25th-75th percentiles.
DISCUSSION

The natural history of chronic hepatitis C concerning liver fibrosis progression has been vigorously studied using liver biopsy specimens. The extent of liver fibrosis is usually evaluated as categorical stages. For example, METAVIR Score uses five stages, F0-F4, for fibrosis evaluation[26]. The fibrosis progression in hepatitis C patients, calculated by using paired liver biopsy, was reported to be 0.1-0.133 Unit per year[12,13]. Liver stiffness measured by transient elastography is now widely accepted as a surrogate marker of liver fibrosis[27]. Liver stiffness is expressed as a continuous variable in kPa unit. The cut-off for cirrhosis is reportedly 13-17 kPa, and the upper limit of measurement is currently 75 kPa. Thus LSM has a wider dynamic range than histological staging, and the rate of fibrosis progression may be more accurately analyzed with LSM.

In the present study, the increase rate of liver stiffness was positively correlated with the age at blood transfusion, as shown by the steeper slopes of approximation curves when patients received BTF at older ages. The cause of this phenomenon is not clear but age-related changes in immunity may be involved. If this is the case, the increase rate is likely to become higher in the same patient with age. Indeed, each approximation curve in the figure apparently becomes steeper with age, suggesting age-related acceleration. This is to be confirmed in future longitudinal studies.

In the present study, the median increase in liver stiffness was calculated as 0.275 kPa per year. Using 13.01 kPa as a cut-off for cirrhosis[28], it will take around 40 years on average to develop cirrhosis, which is consistent with previous reports based on liver biopsy[29]. Admittedly, the present study is basically cross-sectional, and prospective longitudinal LSM will be obviously superior in understanding the natural course of liver fibrosis progression. However, the estimated average increase rate of liver stiffness indicates that such studies will require repeated LSM at an interval of at least five years.

This study has some limitations. First, since this is a cross-sectional study performed after LSM became available, patients with more rapid disease progression may have died and been excluded from the study. Second, because transfusion-associated HCV infection has been virtually eliminated in Japan since 1992, we could not include patients with shorter duration of infection. Lastly, we did not perform paired LSM but assumed that liver stiffness was normal at the time of infection. Longitudinal observation is now on-going but will take several years to obtain results.

Liver stiffness, which can be noninvasively measured with transient elastography, has been recently reported to be well correlated with histologically assessed liver fibrosis stage.

This study evaluated the association between liver stiffness and the duration of infection in blood transfusion-associated hepatitis C patients with and without hepatocellular carcinoma (HCC), focusing on the risk of HCC development.

Liver stiffness is expressed as a continuous variable in kPa unit. The cut-off for cirrhosis is reportedly 13-17 kPa, and the upper limit of measurement is currently 75 kPa. Thus liver stiffness measurement (LSM) has a wider dynamic range than histological staging, and the rate of fibrosis progression may be more accurately analyzed with LSM.