AIM: To study the response to infliximab in pediatric inflammatory bowel disease (IBD), as reflected in fecal calprotectin levels.

METHODS: Thirty-six pediatric patients with IBD [23 Crohn’s disease (CD), 13 ulcerative colitis (UC); median age 14 years] were treated with infliximab. Fecal calprotectin was measured at baseline, and 2 and 6 wk after therapy, and compared to blood inflammatory markers. Maintenance medication was unaltered until the third infusion but glucocorticoids were tapered off if the patient was doing well.

The recent development of easily applicable fecal surrogate markers for intestinal inflammation has provided new means for objective assessment of disease activity and treatment response in chronic inflammatory bowel disease (IBD), a disease becoming more prevalent among children[1]. This is especially important in pediatric patients with limited possibility for follow-up endoscopy due to invasiveness. The fecal levels of neutrophil-derived markers, such as fecal calprotectin or lactoferrin, reflect the mucosal influx of inflammatory cells in the intestine, thus associating with the presence of active inflammation. In IBD, fecal calprotectin levels relate to the findings in endoscopy but also with the grade of histological inflammation[1-4]. When compared to clinical scores and serum inflammatory markers, fecal calprotectin is the most accurate tool to detect the presence of active mucosal inflammation in the colon[4-6]. The negative predictive value for the presence of active inflammation is high (87%)[4]. In children, it has been shown that the level of fecal calprotectin[2,3,7,8] or lactoferrin[6,9] may guide the need for endoscopy.

The data on fecal markers during therapy of IBD are sparse. We showed recently that during glucocorticoid therapy in pediatric patients, fecal calprotectin levels rarely declined below the limit of a raised value, suggesting ongoing mucosal inflammation. However, in those clinically responding to therapy, fecal calprotectin values fell markedly during the first month of therapy[10]. In children presenting with clinically quiescent IBD, only one third of the patients have fecal calprotectin levels below the upper normal limit, whereas the others have raised values, although not reporting subjective symptoms[11]. In adults, fecal calprotectin values are associated with mucosal healing in Crohn’s disease (CD) patients who respond to therapy with tumor necrosis factor (TNF)-α antagonists or other IBD medication[12,13]. In a pilot study by Buderus et al[14], the levels of fecal lactoferrin were measured in five children on infliximab therapy, who showed a decline after the first infusion in each case. The pattern of fecal calprotectin levels during introduction of TNF-α antagonist therapy in children has not yet been described.

In pediatric patients, TNF-α antagonists have emerged for therapy of severe IBD that does not respond to conventional treatment[15-17]. Fecal calprotectin provides a non-invasive means to assess the presence of intestinal inflammation, therefore, we conducted a prospective study in pediatric patients treated with TNF-α antagonist infliximab. Our aim was to study the pattern of fecal calprotectin concentrations during the early phase of therapy.

We prospectively studied 36 children (median age 14 years, range 5.6-17.6 years; 20 boys 20, 16 girls) diagnosed with IBD according to the Lennard-Jones criteria[18], and consecutively introduced to therapy with infliximab. In two cases, the diagnosis of CD was based on extensive aphthous ulceration visualized by wireless capsule endoscopy. All patients had moderate to severe disease that did not respond to treatment with 5-aminosalicylic acid (5-ASA), immunosuppressants or glucocorticoids. In four cases, infliximab was introduced shortly after a diagnosis of extensive small bowel disease. In three patients, the indication for anti-TNF-α agent was fistulating disease, and in all the others, poor response to maintenance medication or steroid dependency. The study group comprised 23 pediatric patients with CD, and 13 with ulcerative colitis (UC). The background data, disease distribution, and medication of the patients are shown in Table 1. Fourteen patients underwent ileocolonoscopy, seven underwent wireless capsule endoscopy, and seven magnetic resonance imaging enterography within 1 m prior to the introduction of infliximab therapy, confirming active disease.

TNF-α antagonist infliximab (Remicade®) was sche-duled at 5 mg/kg at week 0, 2 and 6. All infusions were administered at the Hospital for Children and Adolescents, Helsinki University, Finland during February 2008 to December 2010. The maintenance medication was unaltered until week 6, but if the patient improved clinically, glucocorticoids were tapered off. At each visit, the patients provided a stool sample for fecal calprotectin measurement and a blood sample for measurement of inflammatory marker erythrocyte sedimentation rate (ESR), and hemoglobin. Fecal calprotectin was measured in the routine clinical laboratory by a quantitative enzyme immunoassay (PhiCal Test, Calpro AS, Oslo, Norway; NovaTec Immunodiagnostica, Dietzenbach, GmBH, Germany) and the values quoted as normal were < 100 μg/g stool[10,19]. The clinical activity of the disease was assessed by physicians global assessment (PGA) score from 1 to 3[20].

Spearman non-parametric correlation test, Kruskal-Wallis test, Mann-Whitney U test, and Fisher’s exact test were used. The level of statistical significance was P < 0.05. The values are presented as median and range. 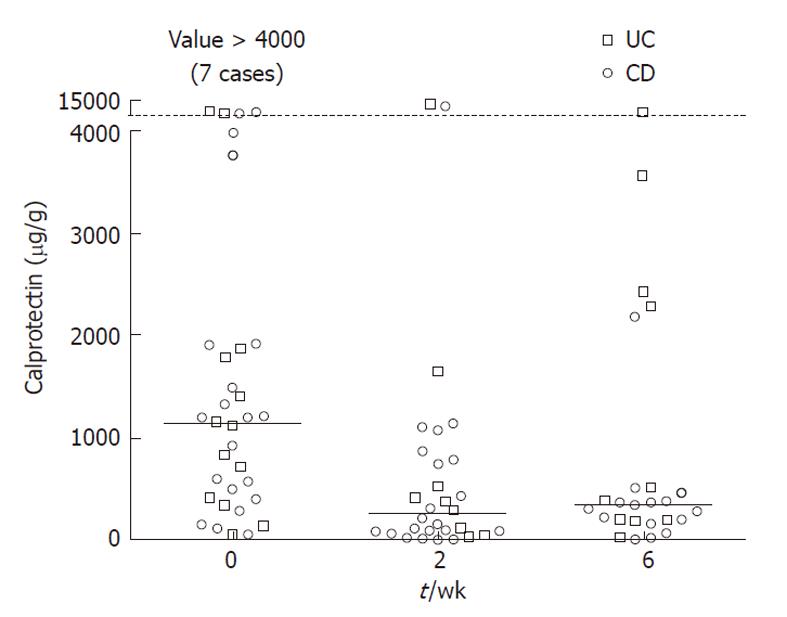 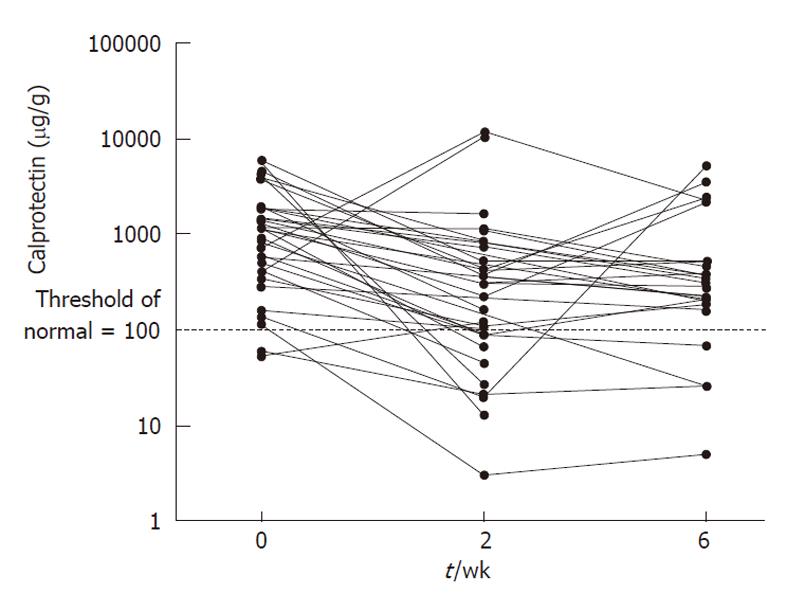 Figure 2 Fecal calprotectin levels at baseline, and 2 and 6 wk after introduction of infliximab therapy showing the individual variation in children with inflammatory bowel disease.

Therapy with TNF-α antagonists has emerged in pediatric patients suffering from moderate to severe CD[21,22], but recently, a therapeutic response has also been reported in severe UC[16,23]. These therapies are effective but at present have high costs and carry a risk for the development of severe adverse effects, which possibly hampers their clinical use[24,25]. Thus, it is of key importance to target the therapy on those who show a positive response and to discontinue administration of TNF-α antagonists if the patient is a non-responder[25]. In keeping with this, surrogate markers for the presence of intestinal inflammation such as fecal calprotectin[13,26] are promising and non-invasive means for the assessment of disease activity in IBD. There have only been a few studies on fecal calprotectin related to therapeutic response in IBD. Previously, we have assessed the pattern of fecal calprotectin in acute pediatric IBD from the start of glucocorticoid therapy until their discontinuation[10], and in adults during the first 12 wk of TNF-α antagonist therapy[12]. Here, we showed the pattern of fecal calprotectin in pediatric IBD during the induction phase of TNF-α antagonist therapy, demonstrating a rapid decline in fecal calprotectin levels within the first weeks of induction in the majority of pediatric IBD patients, suggesting an early response.

Although primary response to TNF-α antagonist therapy is excellent in children, covering 80%-90% of patients with CD, the therapeutic response according to clinical disease activity may deteriorate during the first year of therapy in a considerable proportion of children. It has been estimated that 34%-49% of initial responders need dose escalation or more intense therapy during the first year of infliximab therapy[15,22]. For infliximab therapy in adults, rates of dose intensification ranging from 31% to 36% at 12 mo are comparable to those in pediatric patients[29,30]. Here, the primary response was possibly lost already during the introduction phase in > 10% of the patients, as reflected in the fecal calprotectin levels. In these particular children, PGA did not decrease either. However, clinical activity indices have less correlation to the presence of mucosal inflammation than fecal neutrophil biomarkers, as shown in adult CD patients[31]. Thus, reliance solely on clinical assessment is insufficient, and constantly high fecal calprotectin concentration during therapy warrants endoscopic evaluation also in children. It should be noted that increased fecal calprotectin level does not discriminate between disease relapse and intestinal infection[32].

Blood hemoglobin levels did not significantly alter during the induction phase, but the median ESR decreased during the induction phase by week 2. However, 39% of the patients had normal ESR at baseline, and in these patients, ESR is not applicable for assessment of therapeutic response. In children with IBD, serum C-reactive protein (CRP) is seldom increased, and disappointingly, the measurement of high-sensitivity CRP does not bring additional benefit for the assessment of disease activity[33]. Thus, CRP levels were not measured systematically in the present study. It has also been shown in adult IBD that CRP is a poor marker in mild to moderate disease[34], and performance of fecal calprotectin is significantly better[6].

As in many pediatric studies, one of the major limitations of the present study was the small size of the study group. The majority of the patients had CD but as there were only 13 cases of UC, comparisons related to diagnosis of IBD should be interpreted with caution. Most patients with CD presented with ileocolitis, and the numbers of patients with terminal ileal disease or CD colitis were too small to allow proper comparisons related to therapeutic response to infliximab therapy.

In conclusion, fecal surrogate markers may provide objective and non-invasive means to determine the response to infliximab in individual patients early in treatment. Also, fecal calprotectin is more reliable than clinical activity indices or blood-borne markers of inflammation. It may be possible to identify responding patients by a rapid drop in fecal calprotectin levels, which can be seen already at week 2. By week 6, little improvement is evident and some patients even appear to lose their therapeutic response. Based on our results, fecal calprotectin is a promising marker for evaluating patient response to TNF-α antagonist therapy and may offer a tool for identifying responding patients at an early stage, for more efficient targeting of treatment.

In pediatric patients, tumor necrosis factor (TNF)-α antagonists have emerged for therapy of severe inflammatory bowel disease (IBD), in patients who do not respond to conventional treatment. In children, endoscopy is an invasive procedure, which limits its use in follow-up. Fecal calprotectin is a surrogate marker for the presence of intestinal inflammation and thus provides a non-invasive means to assess disease activity in children.

The recent development of easily applicable fecal surrogate markers for intestinal inflammation has provided new means for objective assessment of disease activity and treatment response in chronic IBD, a disease becoming more prevalent among children. When compared to clinical scores and serum inflammatory markers, fecal calprotectin is the most accurate tool to detect the presence of active mucosal inflammation in the intestine, and it is easily applicable to pediatric clinical practice.

Based on the results, fecal calprotectin is a promising marker for objective evaluation of patient response to TNF-α antagonist therapy and may offer a tool for identifying responding patients at an early stage, for more efficient targeting of treatment. The long-term treatment outcome in pediatric patients related to fecal calprotectin levels after induction therapy warrants further study.

IBD consists of Crohn’s disease, ulcerative colitis and indeterminate colitis, and is a chronic illness that affects the intestines, with a partly TNF-α-driven inflammation that is effectively abated by TNF-α antagonists such as infliximab. Fecal calprotectin is a neutrophil-derived marker of inflammation that is present in the stools, and is a reliable surrogate for endoscopic evaluation of disease activity.

The authors prospectively evaluated the therapeutic response in pediatric IBD patients during introduction to infliximab reflected in fecal calprotectin levels. It is a relevant study and the paper is well presented.