AIM: To evaluate the influence of taking low-dose aspirin for 4 wk on small intestinal complications and to examine the preventive effect of rebamipide.

METHODS: This study was conducted as a single-center, randomized, double-blind, cross-over, placebo-controlled study. Eleven healthy male subjects were enrolled. Each subject underwent video capsule endoscopy after 1 and 4 wk of taking aspirin and omeprazole, along with either rebamipide or placebo therapy. The primary endpoint was to evaluate small bowel damage in healthy subjects before and after taking low-dose aspirin for 4 wk.

Video capsule endoscopy (VCE)[1-2] is a practical technique that can be used to identify the causes and sites of obscure gastrointestinal bleeding. VCE allows for prospective investigation of small intestinal injuries, which frequently occur following the administration of nonsteroidal anti-inflammatory drugs (NSAIDs), such as aspirin. For example, Graham et al[3] used VCE and reported that small intestinal injury occurred in 71% of chronic NSAID users.

Low-dose aspirin is currently recommended for the secondary prevention of cardiovascular and cerebral diseases[4-6]. An observational registry reported that 70% to 80% of patients with a high risk of atherothrombosis were receiving low-dose aspirin to prevent future vascular events[7]. Nonetheless, low-dose aspirin is not without risks. For instance, Lanas et al[8]reported that taking an anti-platelet agent induced lower, as well as upper, gastrointestinal (GI) events (16.9% and 15.5%, respectively). To date, there has been considerable interest in preventing upper gastrointestinal complications of NSAIDs; however, it has become clear that a strategy to prevent small bowel complications may also be needed[9].

The study protocol was approved by the Ethics Committees of Oita University, and written informed consent was obtained from all subjects. Eligible subjects were aged 20 to 65 years, who had taken no drugs during the one-month period prior to the start of this study and who had normal physical examinations. The exclusion criteria were as follows: (1) subjects who did not have a full length, small bowel VCE prior to the start of the study; (2) subjects with stenosis, tumors, ulcers, erosions, or bleeding in the small bowel; (3) subjects who had active GI disease or a history of ulcers, surgery, or bleeding; and (4) subjects who had used any medication, including NSAIDs or aspirin, within 4 wk of the start of the study.

Medications were administered for 4 wk. Then following a 4-wk washout period, the treatments were reversed for the two groups, and the medications were administered for a second 4-wk period. The washout period was designed according to a previous study by Niwa[13]. VCEs of the small bowel were performed five times: prior to the intervention, at 1 and 4 wk during the first period, and at 1 and 4 wk during the second treatment period.

Allocation and randomization were conducted by an independent pharmacologist of Yamanami Pharmacy who had no connection to our institution or the results of this study. The placebo was prepared by Yamanami Pharmacy.

In this study, erosion and ulcer were defined according to Graham’s report[3]. Red spots were defined as red areas without clear mucosal break. Erosions were defined as circumscribed areas of mucosal disruption denuded of villi with or without exudates or red color that involved a diameter equivalent to the valvulae conniventes. Ulcers were defined as erosions with a central area with exudates typically having a surrounding border of elevated mucosa, producing a target lesion or coral polyp appearance[3]. Typical cases of red spots and erosion are shown in Figures 2A and B, and an example of an ulcer is shown in Figure 2C.

Mucosal break was defined as two or more erosions and/or an ulcer. Red spots were scored, but were not considered as a significant injury, since they can be observed normally. The location of the injury was also scored in terms of the locations as proximal (jejunal) or distal (ileal) based on the transit time. The transit time from the pylorus to cecum was divided in half, and the first portion was arbitrarily defined as the jejunal section. Cases with erosion, multiple erosions, and ulcers were calculated. Multiple erosions were defined as more than 2 erosions in a subject. Subjects were only analyzed if the entire small bowel was observable by VCE.

We used the Olympus video capsule system (EndoCapsule, Olympus Ltd.; Tokyo, Japan) for this study. The capsule endoscopy procedure and the methodology for reviewing the images were conducted as previously described. All video images were analyzed twice by each skilled reviewer (KM, TA, and KI). These three investigators were instructed to mark any significant lesions under blinded conditions, and to evaluate lesions according to criteria for determination of the endpoints. If the results differed between the reviewers, then they consulted one another to achieve a consensus. All images were saved for a final comprehensive analysis upon completion of all of the post-treatment capsule endoscopies.

The subjects’ symptoms were observed daily throughout the study periods, and the information was evaluated using a patient diary.

The primary endpoint was to evaluate the proportion of healthy subjects with small intestinal injury after 4 wk of low-dose aspirin therapy. The number of healthy subjects with small bowel mucosal breaks, ulcers, erosions, multiple erosions, and red spots were calculated and treated as parametric parameters. The small bowel area was divided into the jejunum and the ileum. The number of small bowel ulcers, erosions, and red spots were described as the mean ± SD. These values were analyzed at each measured point of the VCE in each group using Mann-Whitney’s U test and compared with the evaluation prior to the aspirin administration.

This study was a pilot study. Therefore, there were no reference data to calculate the sample size. A P-value < 0.05 was considered significant. All statistical analyses were performed using SAS version 8.2 (SAS Institute, Cary, NC, United States).

Eleven healthy subjects were enrolled in this study. The mean age of the subjects was 30 ± 6 years. The median age was 27 years, and the range was 24 to 43 years.

In our study, we observed that the administration of low-dose aspirin induced small bowel red spots and erosions in healthy subjects in the early phase (1 wk). Red spots were observed in all subjects with a mean of 68.0 ± 133.6 at 1 wk and 48.4 ± 67.7 at 4 wk. There were 7 subjects with erosions on the ileum at 1 wk and 9 at 4 wk in the placebo group. These small bowel injuries were induced in the early phase and maintained while taking low-dose aspirin. On the other hand, small intestinal ulcers were observed in 3 subjects in the late phase (4 wk), although no ulcers were observed at 1 wk. These results indicate that serious small bowel injury, such as ulcers, may be induced by longer-term administration of low-dose aspirin. In addition, a very large ulcer was observed in one case at 4 wk (Figure 4), although no ulcer was observed in this subject at 1 wk. This may demonstrate a risk of longer-term low-dose aspirin ingestion. Patients taking low-dose aspirin should be given periodic management. In this study, small bowel bleeding was not observed; however, some patients may present small bowel bleeding due to the use of low-dose aspirin during treatment periods longer than 4 wk. The clinical implications of small bowel mucosal injuries are not yet clear. However, bleeding from mucosal injury can be fatal because aspirin is an anti-platelet agent. In this study, multiple erosions were also evaluated. They resulted in a more serious condition than a single erosion. 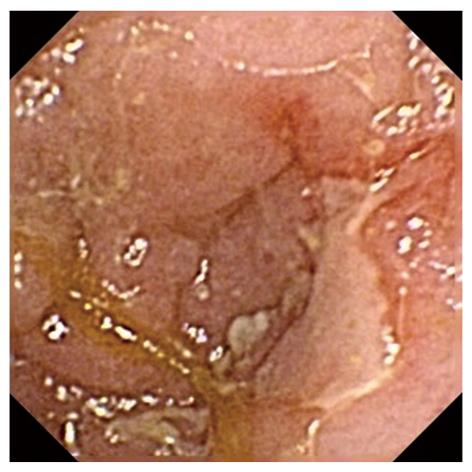 Our results indicate that most small bowel injuries occurred in the ileum rather than the jejunum area. There were 7 cases with a mucosal break in the ileum and 1 in the jejunum at 4 wk in the placebo group. Bjarnason et al[14]demonstrated that small bowel damage depended on various factors, such as microvascular aspects, neutrophil recruitment, mucosal prostaglandins, decreased blood flow, increased permeability, and bacteria. The number and variation of bacteria in the ileum is reported to be greater than in the jejunum[15]. The results of this study may be a reflection of the different bacterial environment in the ileum compared with the jejunum.

Rebamipide {2-(4-chlorobenzoylamino)-3-[2-(1H)-quinolinon-4-yl]-propionic acid} is a cytoprotective antiulcer drug that stimulates the production of endogenous prostaglandins[17]. Here, we observed that rebamipide significantly prevented small bowel mucosal breaks in the ileum area compared to the placebo group at both 1 wk and 4 wk. There were 3 subjects with ulcers in the ileum area at 4 wk in the placebo group, compared with 1 subject with an ulcer at 4 wk in the rebamipide group. The administration of rebamipide showed potential in preventing the incidence of ulcers; however, rebamipide does not have an anti-bacterial effect. The action of rebamipide may be explained by Bjarnason’s hypothesis[14]. Previous reports have indicated that rebamipide induces the production of intracellular prostaglandins[14], improves blood flow[18], suppresses increases in permeability[19], scavenges free radicals[20], and has an anti-inflammatory action[21]. Presently, there is no drug to prevent aspirin-induced small bowel complications or treat patients with these complications, so it is essential to research drugs with these properties in the future.

A limitation of this study is that the study size was small. We did not use a large number of patients, since this was a preliminary study. In addition, since the small bowel is a long organ, it will be necessary to further investigate the appropriate dosage for this candidate drug.

Low-dose aspirin is currently recommended for the secondary prevention of cardiovascular and cerebral diseases. Recently, aspirin-induced small bowel complications have become the focus of investigations around the world.

The results of this study indicate that long-term use of low-dose aspirin can cause small intestinal injuries. Rebamipride could prevent this damage.

This study focused on the influence of low-dose aspirin ingestion for 4 wk on small bowel damage in healthy subjects. The study was designed as a randomized, placebo-controlled, double-blind, cross-over study using video capsule endoscopy. The long-term (4 wk) use of low-dose aspirin induced small bowel damage. Rebamipide prevented this damage, and it may be a candidate drug for preventing aspirin-induced small bowel complications.