Hepcidin, mainly secreted by hepatocytes, is the hormone with a central role in regulating iron homeostasis (reviewed in[1]). Hepcidin suppresses iron absorption from the duodenum and iron egress from macrophages by promoting degradation of ferroportin protein (reviewed in[1]). Thus, the hepcidin-ferroportin interaction controls iron content in serum and iron distribution in tissues, and hepcidin level plays a primary role in regulating this interaction. Hepcidin level is predominantly modulated by erythropoietic activity, iron content, and inflammatory stimuli. Both acute and chronic inflammation states lead to anemia of inflammation (AI), which represents a prevalent type of anemia worldwide (reviewed in[2]). The overexpression of hepcidin is the underlying cause of AI. Therefore, identifying selective compounds inhibiting hepcidin expression could ameliorate anemia of inflammation or anemia associated with other chronic conditions (such as tumors).

A recent study has demonstrated that AG490 compound significantly reduced hepcidin expression in vitro[3]. This study provided evidence that AG490 suppressed hepcidin transcription by inhibiting the JAK/STAT signaling pathway in mouse hepatocytes[3]. AG490 is a tyrosine kinase inhibitor which has been extensively used for inhibiting JAK2/STAT3. However, no in vivo study has been performed to investigate the inhibitory effect of AG490 on hepcidin production. Here, we are the first to show that AG490 significantly inhibits hepcidin expression in mice.

AG490 (from Calbiochem), freshly prepared in 15% ethanol, was injected intraperitoneally into 6-mo-old female BALB/c mice. For an acute treatment, AG490 was given once (15 mg/kg), and mice were then sacrificed 24 h later. For a chronic treatment, AG490 was administered every 4 d for a total of two times at the same dose, and mice were sacrificed on day 8. Control mice received an equal volume of phosphate buffer solution in 15% ethanol. At the end point of the experiments, 50 mg liver and spleen samples from each mouse were collected for tissue iron assay and another batch of 50 mg liver samples were saved for total RNA extraction. A sample of 100 μL serum for each mouse was used for serum iron examination. Iron and hepcidin quantitative real-time polymerase chain reaction assays were carried out as previously described[4,5]. 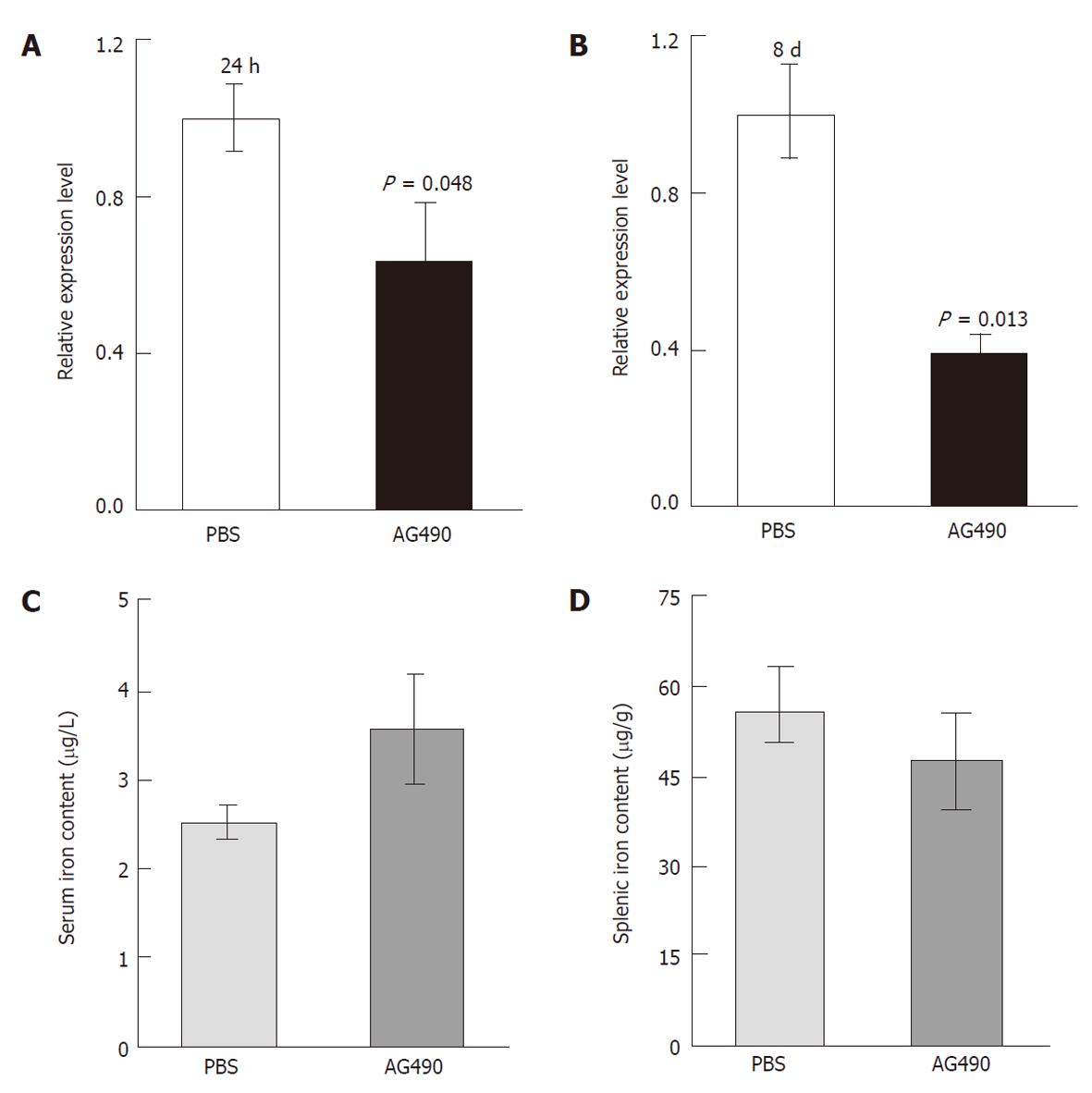 Figure 1 Reduced hepcidin expression upon AG490 treatment. The relative expression level of hepcidin was assessed by quantitative real-time polymerase chain reaction analysis and normalized with β-actin in liver samples from mice treated with AG490 after 24 h (A) and 8 d (B). Hepcidin expression in the phosphate buffer solution (PBS) control mice was defined as 1. Serum and spleen iron content is shown in (C) and (D), respectively, for mice undergoing treatment with AG490 or PBS for 8 d. Results are presented as mean ± SE (n = 9 for A, and n = 3-4 for B, C and D). The SPSS Statistics 17.0 software package was utilized to analyze the data. The difference between two groups was assessed using the independent t test, and P < 0.05 was considered statistically significant.

Iron acquisition and distribution to tissues in mammals are strictly regulated in order to keep systemic iron homeostasis coordinated[6,7]. Iron level and its homeostasis are closely linked to inflammatory responses. Sequestration of iron presumably limits the uptake of iron by invading microbes and thus enhances resistance to infection; however, infection and inflammation increase hepcidin expression, which consequently leads to AI[8]. Thus, inhibitors such as AG490 might be beneficial to improve anemia caused by inflammation or other chronic diseases by reducing hepatic hepcidin production. Similar to our findings, a recent study indicated that heparin also has a potent inhibitory effect on hepcidin expression in vitro and in vivo[9]. Additionally, AG490 or its variants (such as WP1066) have been documented to treat cancers by diminishing active JAK2 signaling[10-12].

To summarize, AG490 represents a prospective approach to attenuate hepcidin-mediated biological actions in order to enhance iron uptake through enterocytes and iron release from macrophages in anemias, and hepcidin repression induced by AG490 in vivo reveals a promising and potentially specific therapeutic means to suppress hepcidin expression in AI or other chronic conditions such as cancers.

We thank Chang-Wen Zhang, Lei Wang and Ze-Hao Huang for assistance with experiments and reagents.