AIM: To investigate the effects of laparoscopic hepatectomy for the treatment of hepatocellular carcinoma (HCC).

RESULTS: Both groups presented with similar blood loss amounts, operating times and complications. Patients in the laparoscopic hepatectomy group started walking and eating significantly earlier than those in the open hepatectomy group, and these more rapid recoveries allowed for shorter hospitalizations. There were no significant differences between procedures in survival rate.

CONCLUSION: Laparoscopic hepatectomy is beneficial for patient quality of life if the indications are appropriately based on preoperative liver function and the location and size of the HCC.

Laparoscopic resection of liver tumors was first reported in 1993[1]. It was initially adopted to treat peripheral, benign tumors that were amenable to non-anatomical wedge resection. The relatively slow development of laparoscopic liver resection compared to other subspecialties of laparoscopic surgery can be attributed to several reasons. First, some technical maneuvers that are frequently applied in open liver resection, such as organ mobilization, control of vascular inflow, and hanging maneuvers, are difficult to reproduce in the laparoscopic setting. Difficulty in controlling hemorrhage, especially when profuse bleeding arises from the inferior vena cava or occurs deep in the liver parenchyma, is another major concern. Risk of gas embolism secondary to pneumoperitoneum can lead to dire consequences. In addition, increased risks of postoperative bile leakage and bleeding and uncertain long-term oncological outcomes concomitant with the resection of malignant tumors are obstacles that have undermined the development of laparoscopic hepatectomy[2].

From 2006 to January 2011, laparoscopic hepatectomies were performed on 30 cases of HCC: 29 Child class A and one Child class B. Hepatitis B and hepatitis C viruses were positively noted in 24 and three cases, respectively. Twenty-three patients had chronic hepatitis, and 25 had liver cirrhosis. The localization of HCC by Couinaud’s classification was as follows: segment I, eight patients; segments II and III, ten patients; segment IV, four patients; segment V, six patients; and segment VI, two patients.

During this same time period, 30 patients elected to undergo conventional open hepatectomy over laparoscopic hepatectomy at the time of informed consent. Twenty-eight cases (left lateral segmentectomy, 10; partial hepatectomy, 20) were retrospectively selected by the same criteria: the tumor was solid, was located in the left lateral or lower segment, and was < 10 cm in size. All operations were performed by the authors. The patients undergoing laparoscopic hepatectomy were compared to patients who underwent open hepatectomy with respect to operation time, blood loss, and blood chemistry. For statistical analysis, Student’s t test, Kaplan-Meier method (for survival rates), and log-rank test were used. P < 0.05 was considered statistically significant.

The technique of laparoscopic hepatectomy has been described elsewhere[4]. Briefly, patients received general anesthesia according to the same protocol. Each patient’s position and trocar placement were determined based on the location of the tumor. Laparoscopic hepatectomies were performed with the four- or five-trocar technique. Exploration of the extent of the tumor and its relationship with the vascular anatomy and other tumors in the liver was performed using intraoperative ultrasonography. In laparoscopic hepatectomy, there is the possibility of a CO2 embolism by pneumoperitoneum during transection of the liver parenchyma and vessels[5]. Therefore, the pneumoperitoneum was shifted using abdominal wall lifting, particularly during liver parenchymal transection. The line of the intended liver parenchymal transection was marked on the liver surface using diathermy or microwaves. After the liver was punctured using a microwave scalpel along the line of the transection, it was irradiated with microwaves (average power 75 W) for a 30-s interval. Ultrasonic dissection of the liver was performed using an ultrasonic surgical system. The branched vessels were clipped and transected. In recent cases, laparoscopic coagulating shears were actively employed, and an endoscopic linear stapler was applied for liver transection if the tumor was pedunculated. In addition, the use of an endolinear stapler allowed surgeons to achieve rapid dissection and transection of Glisson’s sheath and the hepatic veins in a left lateral segmentectomy. The resected liver was maneuvered into a plastic bag. Extraction of the undivided specimen was performed in all patients through the slightly enlarged trocar incision, which enabled histological review.

Demographic data of the clinicopathological features in the open and laparoscopic hepatectomy groups are shown in Table 1. There were no differences in any of the preoperative background variables between the two groups, including tumor size.

No recurrences related to laparoscopy, such as peritoneal dissemination and port-site recurrences, were observed. There were no significant differences in the survival rates between procedures, although more clinical cases and longer follow-up periods are needed to reach definitive conclusions. The 5-year survival rates for open and laparoscopic hepatectomy groups were 53.3% and 50%, respectively (Figure 1, P > 0.05). 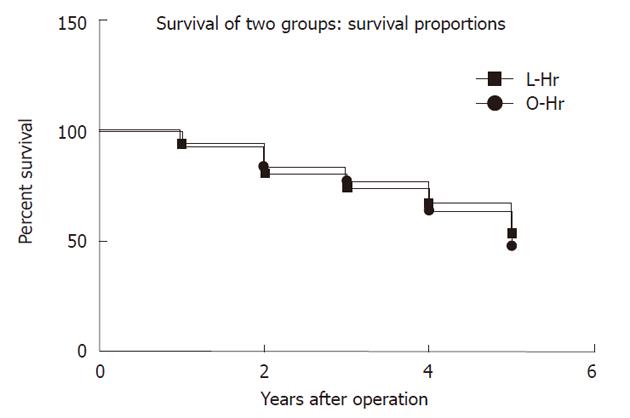 Laparoscopic surgery for liver resection is a highly specialized field because the liver has unique anatomical features that present technical obstacles for surgery, such as difficulties in the control of bleeding and the potential for bile leakage from the intrahepatic vessels. However, important technological developments and improved endoscopic procedures have been established. Equipment modifications, such as intraoperative ultrasonography, ultrasonic dissection, microwave coagulators, and argon beam coagulators, and the introduction of endoscopic linear staplers and laparoscopic coagulation shears have been recognized for their efficacy in liver surgery. These advances have led to a higher frequency of laparoscopic partial hepatectomies performed in recent years. There have been reports of laparoscopic right and left lobectomy[6-9]. The future direction of laparoscopic liver resection is the use of surgical robotic systems[1,10,11]. Liver resection with the use of the Da Vinci robotic system has been reported[5]. The potential advantages of using robots include the visualization of high-quality 3D images and tremor filtering. The EndoWrist robotic instrument is even able to perform a 360-degree range of motion. However, the advantages of employing robotic systems must be balanced with the high cost of surgery, lack of training schemes, and difficulty of conversion to open surgery. Nonetheless, the use of surgical robots is expected to become more common in the treatment of both benign and malignant liver tumors in the foreseeable future.

The treatment of HCC and, more specifically, the indications for hepatectomy, are very limited. Nonsurgical ablation therapy, an alternative method to surgery, has been advocated by some because it yields improved quality of life, which has subsequently provoked controversy over curability[12]. However, the Liver Cancer Study Group of Japan has reported that patients who underwent hepatic resection had a higher survival rate than a nonsurgical treatment group, even for small-sized HCCs[13]. Under these circumstances, laparoscopic hepatectomy represents an intermediate option between ablation therapy and conventional hepatectomy; ablation therapy is less invasive than surgical resection, but laparoscopic hepatectomy is superior in its ability to resect the tumor completely and in allowing optimal pathological evaluation from the resected specimen. Although laparoscopic surgery is less invasive than standard hepatectomy, laparoscopic hepatectomy is inferior to open hepatectomy in terms of anatomical resection. Laparoscopic systematic resection is currently contraindicated because of its technical difficulties, except in the case of left lateral segmentectomy. A recent report has demonstrated the safety associated with more limited blood loss for laparoscopic left lateral segmentectomies in a case–control study[14].

Laparoscopic liver resection is a safe and feasible treat-ment option for HCC, even in cirrhotic liver[15]. However, converting to a new surgical method does not mean that the old surgical method was a failure. With advances in surgical techniques and instruments, laparoscopic liver resection has been performed more frequently, even for tumors in difficult anatomical locations. Nonetheless, oncological clearance should not be jeopardized in exchange for the postoperative benefits of laparoscopic surgery. Laparoscopic liver resection offers advantages over open resection in terms of ambulation, oral intake and hospital stay. These more rapid recoveries allow for shorter hospitalization, which is reflected in reduced cost and better patient quality of life. The equivalent 5-year survival rates that are observed with laparoscopy promote this approach as a promising avenue of research for the resection of HCCs; however, further evaluation is required.

With the development of laparoscopic instruments and parenchymal transection devices and an improved understanding of the vascular anatomy of the liver, it is now widely accepted that laparoscopy will be used increasingly in liver surgery.

The underlying intent of laparoscopic surgery for hepatocellular carcinoma is to provide curative resection while minimizing complications. In this study, the authors demonstrated that laparoscopic hepatectomy avoids some of the disadvantages of open hepatectomy and is beneficial for quality of life, as a minimally invasive procedure. There were no significant differences in the survival rates between procedures.

This paper describes a retrospective evaluation of a cohort of patients who underwent laparoscopic hepatectomy at a single center. A good clinical outcome depended on the reasonable choice of indication, suitable parenchymal transection devices, and sufficient experience in hepatic resection and laparoscopy.

Laparoscopic hepatectomy can be performed in selected patients.

This is a comparative observational study on laparoscopic liver resection for cancer. Its publication seems important in a time of intense and controversial discussion about the use of laparoscopy for liver cancer.