METHODS: A series of gastric cancer cell lines resistant to different concentrations of adriamycin was established, and the expression of PrPc, Bcl-2 and Bax was detected in these cells. Apoptosis was determined using Annexin V staining. Western blotting and immunohistochemistry were performed to detect the expression of PrPc in patients receiving chemotherapy and to explore the role of PrPc expression in predicting the chemosensitivity and the outcome of gastric cancer patients receiving chemotherapy. Follow-up was performed for 2 years.

Prion protein (PrPc or PrP) is a pathogen that causes bovine spongiform encephalopathy (also known as “mad cow disease”). In 1982, Prusiner[1] isolated the protease- and heat-resistant protein from the brains of scrapie-infected hamsters. PrPc is encoded by the host prion gene but not by the prion gene. Thereafter, a new field of biomedicine, prion biology, was founded, and a new concept of pathology, protein conformation diseases, was also established. In 2003, our study showed that PrPc was associated with the multidrug resistance of gastric cancer[2,3], and thereafter, a series of studies have been conducted to explore the role of PrPc in the differentiation, proliferation and metastasis of cancer cells and to deeply investigate the structural domains of PrPc. These studies have achieved great progress in prion biology and pathogenesis[4-13]. The present study aimed to investigate PrPc expression in gastric cancer cell lines and its role in predicting the outcome of gastric cancer patients undergoing chemotherapy. Our study may elucidate the clinical significance of PrPc over-expression in cancers and provide a potential indicator for predicting the outcome of cancer patients.

A total of 185 patients with gastric cancers at stages

Detection of the expression of PrPc, Bcl-2 and Bax in each adriamycin-resistant SGC7901 cell line by Western blotting: After recovery from storage in liquid nitrogen, cells were maintained in fresh medium. Total proteins were extracted from cells in the logarithmic growth phase of growth, and the protein concentration was determined. Then, 40 μg total proteins were separated in odium dodecylsulphate (SDS) polyacrylamide gels and transferred onto nitrocellulose membranes. The primary antibodies used to detect the target proteins were anti-PrP, anti-Bcl-2 and anti-Bax monoclonal antibodies and anti-β-actin polyclonal antibody; horseradish peroxidase-conjugated goat anti-mouse IgG was used as the secondary antibody. The bands were visualized using the ECL system (Amersham Pharmacia Biotech, Piscataway, NJ, United States) according to the manufacturer’s instructions, and protein concentration was quantified by densitometry with TotalLab 2.0 software.

Flow cytometric analysis of apoptosis in each adriamycin-resistant SGC7901 cell line: Cells in the logarithmic phase of growth were transferred to a 6-well plate. After adherence, cells were maintained in medium with 0.7 μg/mL adriamycin at 37 °C for 48 h. The medium was then replaced with fresh medium containing 5 μL Annexin V-FITC and 1.5 mmol CaCl2, and the cells were incubated for 15 min at 37 °C. Subsequently, the cells were re-suspended in 490 μL binding buffer and 5 μL PI staining solution and incubated for 10 min at 4 °C. Apoptosis was then detected by flow cytometry, and the apoptosis index (AI) was calculated as follows: AI = (number of early and late apoptotic cells)/total number of cells × 100%.

Detection of PrPc expression in different gastric cancer cell lines by Western blotting: Gastric cancer cells in the logarithmic growth phase of growth were harvested and the total protein was extracted, after which the proteins were separated on SDS polyacrylamide gels and transferred onto nitrocellulose membranes. The primary antibodies used to detect the target proteins were anti-PrP, anti-Bcl-2 and anti-Bax monoclonal antibodies and anti-β-actin polyclonal antibody; horseradish peroxidase-conjugated goat anti-mouse IgG was used as the secondary antibody. The bands were visualized using the ECL system (Amersham Pharmacia Biotech, Piscataway, NJ, United States) according to manufacturer’s instructions.

The treatment strategies included surgery + chemotherapy and surgery + chemotherapy + interventional therapy. The treatment efficacy was recorded as complete remission (CR), partial remission (PR), stable disease, and progressive disease according to the criteria developed by the World Health Organization (WHO). The overall efficacy was calculated as CR + PR. According to the Karnofsky Performance Scale (KPS), the patients were stratified into one of the following groups: the improvement group (the increase in KPS score was greater than 10 after treatment), the deterioration group (the decrease in KPS score was greater than 10 after treatment), and the stability group (the changes in KPS score were less than 10 after treatment). The performance status was evaluated according to Zubrod-ECOG-WHO, and survival was followed up for 2 years. The demographics of these patients at baseline and after 2 years of follow-up were summarized in Table 1, respectively. PrPc expression in the patient samples was detected by immunohistochemistry and Western blotting, and the patients were divided into PrPc-positive and PrPc-negative groups. The whole protocol was approved by the Institutional Review Board of the Ethics Committee of our hospital. Informed consent was obtained before the study. 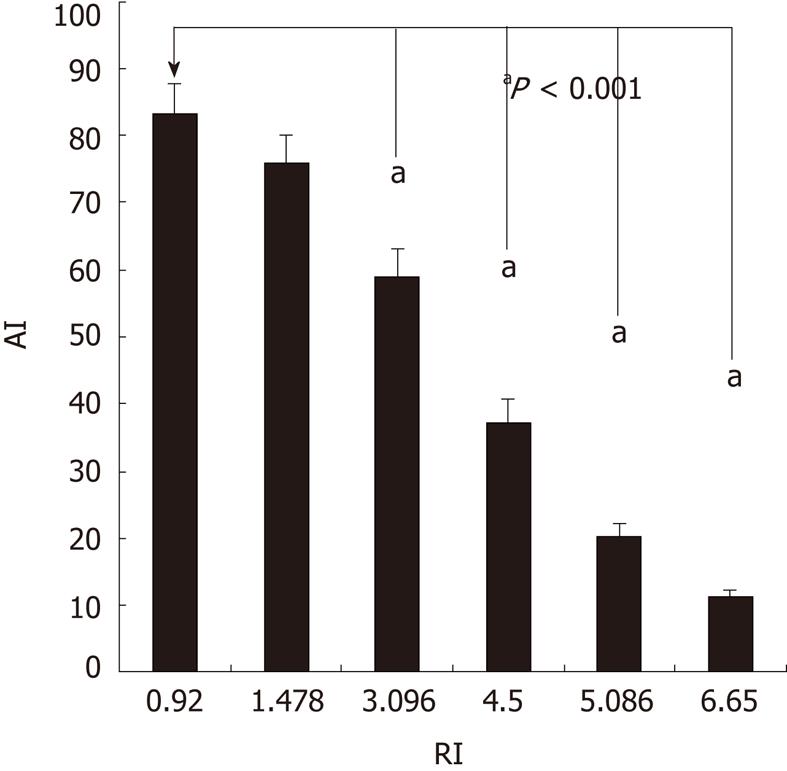 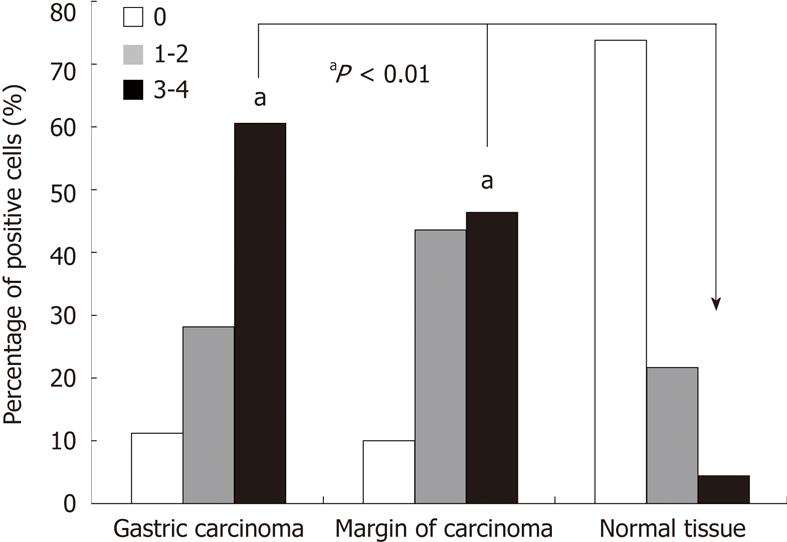 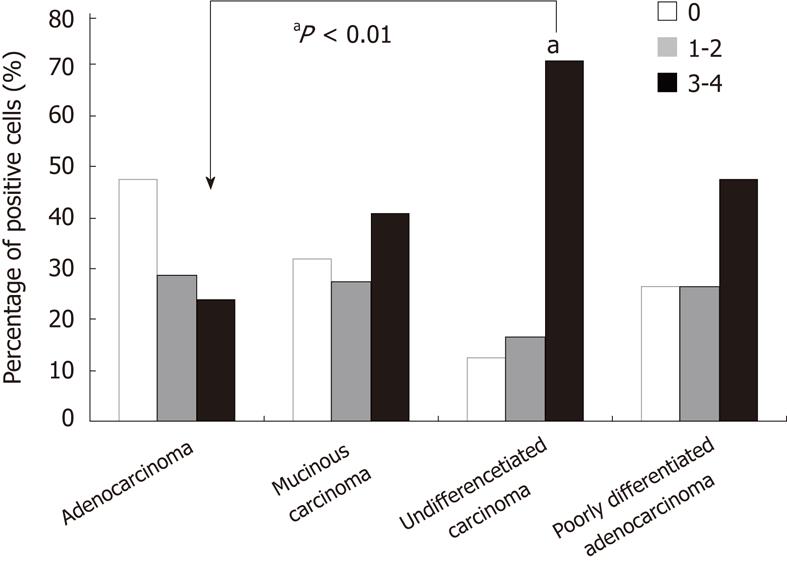 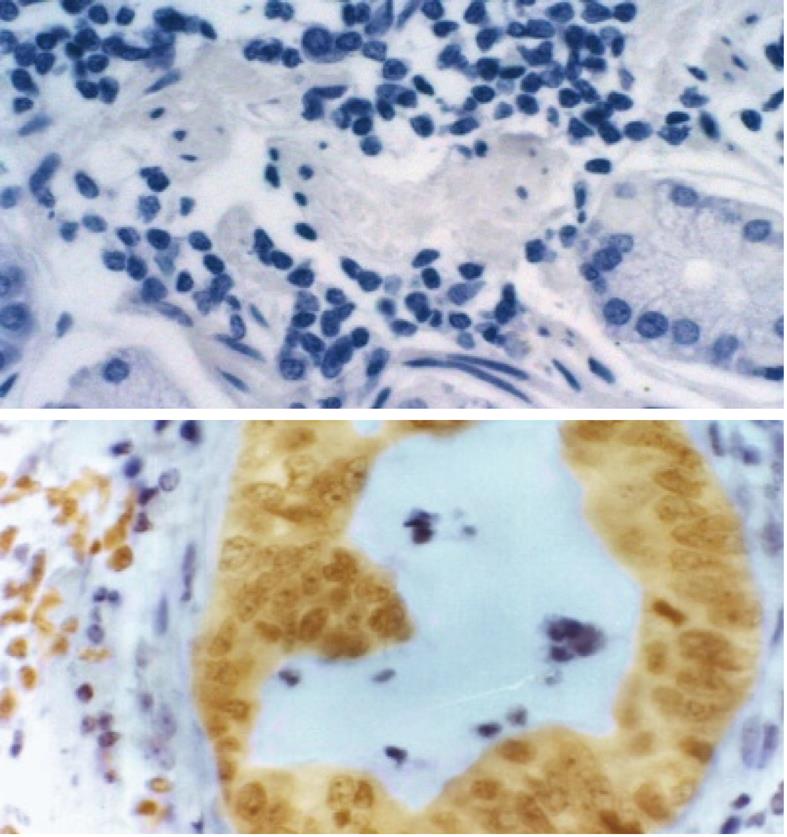 PrPc is closely related to tumor development. PrPc expression has been shown to be related not only to cancer cell proliferation but also to drug resistance and cancer cell metastasis[21]. Meslin et al[22] showed that PrPc gene silencing in ADM-resistant MCF-7 breast cancer cells increased the sensitivity of those cells to TRAIL-induced apoptosis. In addition, Bcl-2 expression was inhibited and pro-apoptotic Bax expression was increased following PrPc gene silencing, resulting in enhanced apoptosis. Our in vitro experiments further validated this result. After pulse induction of SGC7901 cells with different concentrations of adriamycin, PrPc, Bcl-2 and Bax expression and apoptosis were determined in adriamycin-resistant cells. Results showed that PrPc expression increased and apoptosis decreased with the increase in resistance to adriamycin. Our experiments not only show the dynamic changes in PrPc, Bcl-2 and Bax expression in gastric cancer cells resistant to various concentrations of adriamycin, but they also reveal that PrPc over-expression decreases apoptosis in cancer cells and reduces their sensitivity to drugs. It has been confirmed that PrPc is an anti-apoptotic gene that can cause synergistic effects with Bcl-2. PrPc has been shown to be able to dimerize with the C-terminus of Bcl-2[23,24]. When PrPc expression is up-regulated, the Bcl-2/Bax ratio is increased and is accompanied by the suppression of p53 and Bax, resulting in anti-apoptosis[25-29]. Bcl-2 is expressed in almost all cell types, while PrPc expression is rarely observed in normal cells. This observation also determines the significance of PrPc expression in clinical practice. Our results confirmed the above findings[2,10].

In another study, Meslin et al[22] detected PrPc expression in breast cancer patients that were non-responsive to an estrogen receptor inhibitor. Results of the study of the efficacy of chemotherapy indicated that patients with suppressed PrPc expression show favorable sensitivity to chemotherapy. This study was very important in monitoring the sensitivity of cancers to chemotherapy and drug resistance. In addition, detection of PrPc expression may become an indicator in diagnosing cancers and in monitoring the therapeutic efficacy. Our results confirmed that PrPc over-expression predicts gastric cancer cell drug resistance.

In summary, we conclude that: (1) PrPc expression is associated with gastric cancer pathological type and cancer cell differentiation; (2) PrPc exerts synergistic effects with Bcl-2 to decrease apoptosis, resulting in drug resistance; (3) Gastric cancer patients with PrPc over-expression are resistant to chemotherapy and have a poor prognosis. We speculate that PrPc might be one of the markers used for monitoring the response to chemotherapy and the prognosis of gastric cancer.

Prion Protein (PrPc or PrP) is a pathogen causing bovine spongiform encephalopathy (BSE, also known as “mad cow disease”). PrPc is encoded by host prion gene but not by the prion gene. In 2003, the authors’ study showed that PrPc was associated with multi-drug resistance of gastric cancer and thereafter a series of studies have been conducted to explore the role of PrPc in the differentiation, proliferation and metastasis of cancer cells and to investigate the structural domains of PrPc. The present study aimed to investigate the PrPc expression in gastric cancer cell lines and the role of PrPc expression in predicting outcome of gastric cancer patients undergoing chemotherapy.

In the article “Over-expression of PrPC and its antiapoptosis function in gastric cancer” to be published on March 24, 2006, the authors found that PrPc might play a role as an effective antiapoptotic protein through Bcl-2-dependent apoptotic pathways in gastric cancer cells. According to results from this article, the authors conclude that PrPc and Bcl-2 have synergistic anti-apoptotic effects leading to increased resistance to chemotherapy. The PrPc expression level might be a valuable marker in predicting the efficacy of chemotherapy and prognosis of gastric cancer patients receiving chemotherapy. The findings were based on a series of studies which have been conducted to explore the role of PrPc in the differentiation, proliferation and metastasis of cancer cells and to investigate the structural domains of PrPc.

PrPc is a pathogen causing BSE (also known as “mad cow disease”). The prion (from proteinaceous infectious only) is devoid of informational nucleic acids and consists of an `infectious’ protein that is capable of converting a normal host protein termed PrPc, or simply PrP, into a likeness of itself. PrPc is encoded by host prion gene but not by prion gene.