Pulmonary embolism occurs more frequently after hepatectomy than previously thought but is infrequently associated with peripheral deep vein thrombosis. In this paper, we report 2 cases of postoperative hepatic vein thrombosis after liver resection. Both patients had undergone major hepatectomy of a non-cirrhotic liver largely exposing the middle hepatic vein. Clots were incidentally found in the middle hepatic vein 4 and 17 d after surgery despite routine systemic thrombo-prophylaxis with low molecular weight heparin. Coagulation of the transition plan in a context of mutation of the prothrombin gene and inflammation induced biloma were the likely predisposing conditions. Clots disappeared following curative anticoagulation. We conclude that thrombosis of hepatic veins may occur after liver resection and is a potential source of pulmonary embolism.

Patients undergoing liver surgery have long been considered to be at low risk of venous thromboembolism. Routine Doppler ultrasound following major hepatectomies identifies deep vein thrombosis in 2% of patients[1], three to five times less than after general abdominal or colorectal procedures performed with adequate anticoagulation prophylaxis[2-5]. However, pulmonary embolism has recently emerged as an increasingly frequent and potentially fatal complication following liver resections. Its incidence ranges between 1% and 3% in patients undergoing liver resections[1,6] and has been reported to be as high as 10% in living-related donors undergoing a right hepatectomy[7,8]. These figures are greater than the 0.3% incidence observed following general surgery and the 2%-3% incidence observed after high risk procedures such as invasive neurosurgery, total hip arthroplasty, and radical cystectomy[9]. Liver regeneration that follows major resections is indeed associated with an early and transient dysregulation of the haemostatic system resulting in a hypercoagulability state[10].

We shed a new light on this discrepancy by reporting two patients who developed thrombi in their hepatic veins following hepatectomy. To our knowledge, this complication has not been previously reported which can be explained by the technical difficulty to visualise the hepatic veins on imaging studies in the early postoperative period.

A 39-year-old woman underwent a right hepatectomy for a 13 cm large liver hemangioma responsible for incapacitating pain. Hepatic veins were patent and besides a body mass index of 32 kg/m2 she had no known risk factors for thromboembolic disease[12]. On the evening before surgery, tight-length graduated compression stockings were placed and she received a subcutaneous injection of 40 mg enoxaparin. Liver transection was performed using an ultrasonic dissector with two intermittent clamping of the hepatic pedicle of 11 and 15 min. Intrahepatic portal structures and hepatic veins were occluded with ligation, clips or bipolar coagulation as required. The right hepatic vein was closed extraparenchymally and the main trunk of the middle hepatic vein was retained with the left liver. Additional haemostasis of the transection surface was achieved with bipolar coagulation and the left liver was fixed to the diaphragm to prevent twisting of the hepatic veins under intraoperative ultrasound control[13]. No transfusion was required, the patient was extubated 3 h after surgery and daily administration of 40 mg enoxaparin was reinitiated on the following morning.

The early postoperative course was uneventful with rapid normalization of liver function tests but on the fourth postoperative day, she developed shortness of breath and a temperature rise at 37.8°C at which time a computed tomography (CT) scan was performed. There was no obvious evidence of pulmonary embolism but three defects were found in the middle hepatic vein adjacent to the transection plan (Figure 1) that were confirmed to be 2-3 cm long clots by Doppler ultrasound. The inferior vena cava and termination of the middle hepatic vein had a normal flow pattern otherwise. Mild right pleural effusion, ascites and localised thrombosis of the right posterior tibial veins were also uncovered. Following administration of enoxaparin at 1.0 mg/kg twice daily, pulmonary symptoms disappeared within 48 h and control Doppler ultrasounds performed every other day showed the progressive disappearance of two of the three clots and the reduction in size of the third at which time she was discharged (postoperative day 21). The postoperative course had otherwise been uneventful. A control CT scan performed 1 mo later showed the complete disappearance of the clots. Screening for inherited thrombophilia identified a heterozygote (20210AG) mutation of the prothrombin gene while other risk factors, including factor V Leiden mutation were absent.

A 78-year-old man underwent simultaneous left hepatectomy extended to a part of segment 8 by laparotomy and laparoscopic sigmoidectomy for synchronous colorectal liver metastasis. He had no history of thromboembolic disease and surgery was preceeded by 6 cycles of chemotherapy (FOLFOX regimen + cetuximab) that had induced a partial response according to RECIST criteria. On the evening before surgery, tight-length graduated compression stockings were placed and he received a subcutaneous injection of 40 mg enoxaparin. Liver transection was performed as previously described, without vascular clamping. The middle hepatic vein was closed intraparenchymally while the left hepatic vein was closed extraparenchymally. No transfusion was required, the patient was extubated 3 h after surgery and daily administration of 40 mg enoxaparin was reinitiated on the following morning.

The early postoperative course was uneventful and the patient was discharged on postoperative day 11. He was re-admitted on postoperative day 17 for sepsis. CT scan showed bile collection close to the cut edge of the liver and a clot in the middle hepatic vein extending into the supra-hepatic vena cava (Figure 2). Percutaneous drainage of the collection was performed and anticoagulant therapy was administered, allowing complete regression of the thrombosis seven days later. Oral anticoagulation was then administered and the patient was discharged 10 d after admission (postoperative day 27). Screening for inherited thrombophilia was negative. 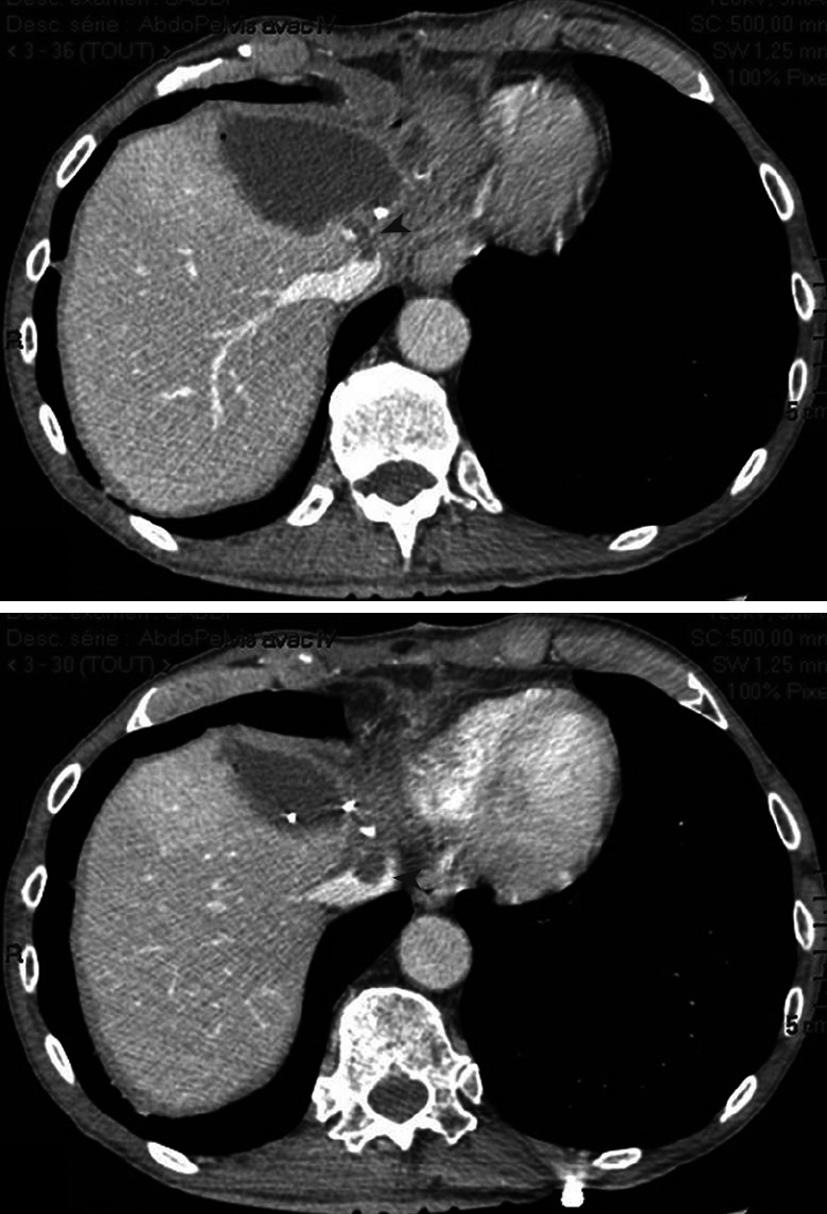 Figure 2 Postoperative computed tomography scan (day 17) in case 2. A biloma is present at the upper part of the transection plan and a defect is visible in the distal end of the middle hepatic vein extending in the inferior vena cava (arrowheads).
DISCUSSION

The present study reports two patients who developed early hepatic vein thrombosis following liver resection, a previously unrecognized complication. Both had several features in common: (1) they had undergone a major hepatectomy within a non-cirrhotic liver; (2) the thrombosis was located within the hepatic vein adjacent to the transection plan; and (3) was discovered somewhat fortuitously.

We have previously shown that major resections of non-cirrhotic livers are associated with an early postoperative decrease in coagulation inhibitors protein C and antithrombin together with an increase in factor VIII and von Willebrand factor that induce a transient hypercoagulability state[10]. Both patients underwent a major resection while already being at increased risk of thrombosis. One indeed retrospectively proved to be overweight and to have a heterozygote (20210AG) mutation of the prothrombin gene associated with a three- and two-fold increase in the risk of thrombosis, respectively[14]. The other patient had an advanced malignancy that also increased the risk of thrombosis[12,14] and is associated with increased procoagulant activity[15].

The specific finding was, however, that thrombosis developed within the main trunk of a major hepatic vein adjacent to the transection plan. One patient (n°2) developed a biloma, an obvious local predisposing condition as local infection causes vein wall inflammation while general infection increases systemic procoagulant activity[16]. This was not the case in the other (patient 1) and we believe that thrombosis may have been favoured by extensive coagulation of the raw surface of the liver. Bipolar coagulation, which is widely used to achieve hemostasis during parenchymal transection, may result in heat-induced endothelial injury when a major hepatic vein lies close to the transection plan which is the case during formal right and left hepatectomies. Portal triad clamping, which is frequently performed during major hepatectomies, may also favour through stasis these coagulation-induced thrombosis[12].

The recognition of these thrombi in our patients was somewhat fortuitous which may explain why this complication might have previously been overlooked. CT imaging in the postoperative course of liver resections is generally indicated when a pulmonary embolism or an abdominal collection are suspected. Angio-CT scans are usually performed 15-20 s after the injection at which time hepatic veins are not visible. During more conventional CT scans, acquisition of images is similarly not always performed at the time hepatic veins are injected. Besides, the middle hepatic vein has a longitudinal direction and is therefore hardly visualized along a significant length by the transverse slices of CT scans.

Once present in major hepatic veins, these thrombi may easily migrate into the inferior vena cava as previously shown for tumour[17] or hepatic fragments[18]. Pulmonary embolism was not formally documented in our patients probably because anticoagulation therapy was initiated prior to clot migration.

In conclusion, thrombosis may occur in hepatic veins after liver resection as a result of intra- or postoperative local injury. This would explain why pulmonary emboli have been observed in the absence of peripheral deep vein thrombosis. This hazard should be taken into account when performing extensive coagulation of the raw surface of the liver when a major hepatic vein is exposed.