Percutaneous endoscopic gastrostomy (PEG) is a proven feeding tube, just as the nasogastric tube is proven to be able to deliver enteral nutrition. For long-term use, both patient and caregiver want neither. What is desired is the LOOPPEG® 3G tube, more secure than the PEG, and less risky to change than the nasogastric tube. Future clinical research should focus on this high-comfort low-risk tube.

I found “Survival of geriatric patients after percutaneous endoscopic gastrostomy in Japan” by Yutaka Suzuki et al[1] to be an interesting and timely article.

With an aged population and several centers working together, they were able to recruit a large sample and, consequently, produce robust results. The first lesson to be learnt is that collaboration can produce better results. The second lesson is that, for the Japanese population at least, the percutaneous endoscopic gastrostomy in geriatrics is proven. To the co-authors and their institutions, I offer my heartiest congratulations. My country, Singapore, is ageing rapidly and their experiences can offer valuable lessons.

I emphasize that my subsequent suggestion for future research should not be taken as criticisms of their work, which is an unqualified success. By way of introducing my comments, I pose two questions.

First, since elderly patients in other countries might react differently from Japanese patients, should we not do a similar study of the PEG in Singapore? My answer is no, for the following reason. The difference in year (or mo) is unlikely to be important to the geriatric patient, in whom compassion is more valued than cure.

Second, since the nasogastric tube might give a better survival than the PEG, should we not do a similar study on this feeding tube? Again, my answer is no, for the following reasons. Feeding tube and survival of the elderly have a correlation but not a cause-effect relationship. Both nasogastric tube and PEG can deliver the enteral nutrition, and the choice is determined more by the risk/comfort profile of the tube. Statistical significance does not mean clinical significance. Conversely, lack of the former does not mean that the PEG is not a clinically better tube. The relationship between nasogastric tube and PEG is predictable, independent of age and race, and unlikely to be affected by the study findings, however robust. 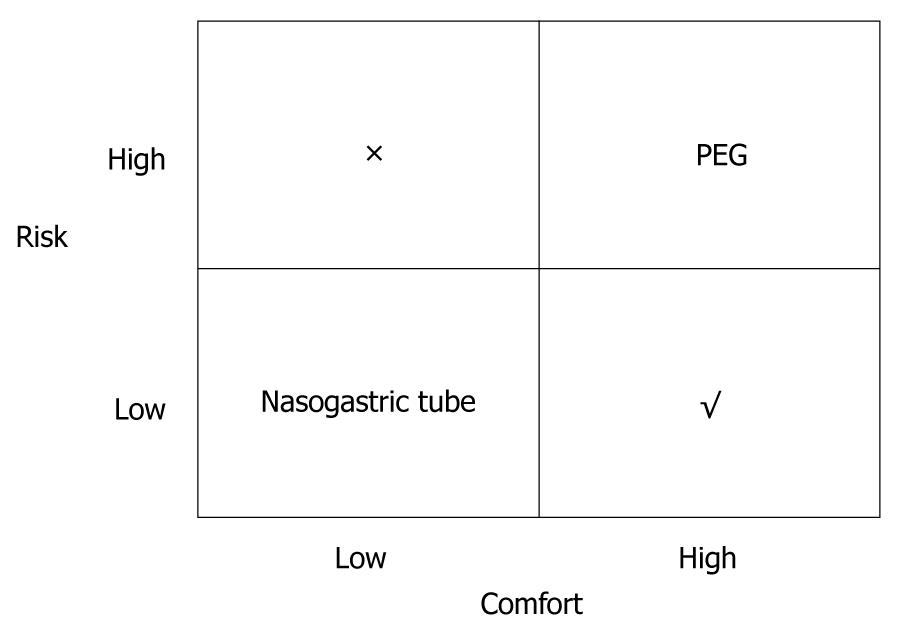 In my opinion, there is only one feeding tube which meets this profile. The LOOPPEG® 3G tube is comfortable because it bypasses the nose and low in risk because it cannot be dislodged[3]. Also, it is less risky to change than the nasogastric tube. Consequently, the 3G tube can be made 15 Fr or smaller because tube blockage is a non-issue, having been negated by easy tube change. Thus, the trauma of changing the tube - physical, psychological and financial - is minimized.

However, no case series has been published. It may take forever for a sizeable sample and robust results to come out from my part of the world. Hence, I hope our Japanese colleagues, having published a solid study, will take up the challenge to move beyond the PEG, research the 3G tube, and report their findings in this fine Journal.