METHODS: Ten non-dysphagic adult subjects had a high-resolution manometry probe passed transnasally and positioned to cover the UES, the esophageal body and the LES. Ten water swallows in each subject were analyzed for time lag between UES relaxation and LES relaxation, LES pressure at time of UES relaxation, duration of LES relaxation, the distance between the transition level (TL) and the LES, time in seconds that the peristaltic wave was before (negative value) or after the TL when the LES became relaxed, and the maximal peristaltic pressure in the body of the esophagus.

CONCLUSION: LES relaxation seemed to be caused by the peristaltic wave pushing the bolus from behind against the LES gate.

Swallowing dysfunction with esophageal food retention is a common problem in an adult population with hiatus hernia. Most articles reporting lower esophageal sphincter (LES) studies depict LES relaxation caused by neurogenic mechanisms[1] in gastroesophageal reflux (GER). The ability of the LES to allow esophagogastric transit after deglutition has received little attention. Efforts have been made to prove that LES relaxation is triggered by a neurogenic reflex following deglutition[2], that the LES and the upper esophageal sphincter (UES) relaxations are simultaneous events and that the cervical portion of the vagus nerve mediates inhibitory and excitatory changes in LES pressure[3]. In a recent study, a biodynamic approach was proposed for LES opening when GER takes place in hiatal hernia and the gastric wall tension pulls open the LES[4]. As long ago as 1978[5], LES was suggested to be a biodynamic gate which is forced to open when a bolus is propelled by esophageal peristalsis. We decided to further challenge the idea of LES as an esophagogastric pressure zone dependent on complex neuro-humoral factors.

The recent development of high-resolution solid-state manometry (HRM) systems with closely spaced circumferential pressure sensors has made it possible to display simultaneous recordings along the entire esophagus in color-coded pressure plots (Figure 1) and has dramatically improved the diagnostic assessment of esophageal function and disease. With conventional esophageal manometry, simultaneous events in the UES and LES have been difficult to display especially since deglutition often will displace the pressure sensors due to shortening of the esophagus. The HRM technique enables, therefore, a unique possibility to study UES and LES pressure during the entire deglutition period and independent of any sphincter dislocation. In order to find out if there is an interplay between pulling forces and LES opening, the aim was therefore to study the relationship between UES relaxation, peristaltic pressure and LES relaxation following deglutition using the HRM technique. 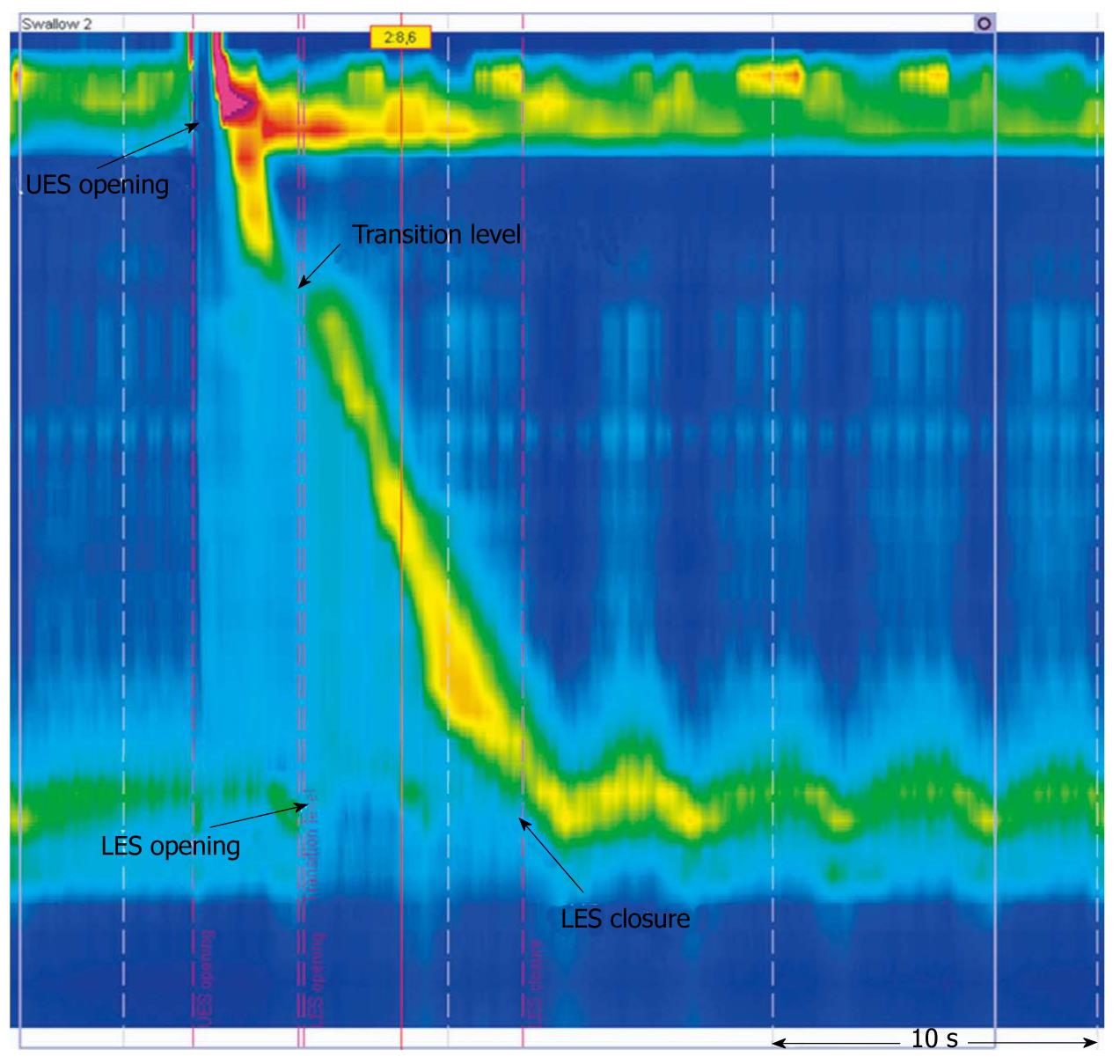 The HRM system (ManoScan 360 A-100, ManoView analysis software ver. 2.0.1 from Sierra Scientific Instruments Inc., Los Angeles, CA) uses a solid state catheter (Ø 4.2 mm) with closely spaced circumferential pressure sensors with 1 cm intervals over 36 cm. The HRM catheter was passed transnasally and positioned to be recording simultaneously from the hypopharynx, through the body of the esophagus, to the stomach. The catheter was calibrated outside the patient before and immediately after the investigation using the thermal compensation option in the software.

We performed a prospective HRM study in 10 adult patients (median age 45 years, range 38-63 years; 7 women, 3 men) who were admitted to an esophageal laboratory for suspected dyspepsia. It can be claimed that our patients with dyspepsia are not representative for studies of normal LES and UES function. Dyspepsia is a diagnosis without organic lesion and with diffuse symptoms predominantly in the gastric region. The patients did not have any symptoms of dysphagia and reflux, they were free of medication, and the presence of hiatus hernia was excluded at gastroscopy and HRM. It is therefore regarded that confounding factors have been excluded in the study material.

The investigation comprised ten swallows of a 10 mL water bolus in a supine position. The characteristics analyzed were: (1) the time lag between UES relaxation and LES relaxation; (2) the LES pressure at time of UES relaxation; (3) the duration of LES relaxation; (4) the length of the esophagus between UES and LES; (5) the distance between the transition level (TL) and the LES; (6) time in seconds that the peristaltic front wave was before (negative value) the TL or after the TL when the LES pressure dropped to nadir; and (7) the maximal peristaltic pressure in the esophagus. The eight best readable swallow recordings in each subject (a total of 78 swallows) were calculated upon, and the mean values of each individual item are given.

TL is defined as an esophageal zone with striated-to-smooth muscle fiber transition[6] showing as a short loss of peristaltic pressure (Figure 1).

Individual values and the mean of all values are presented in Table 1. The LES relaxed on average 3.5 s after the UES had opened. The mean LES pressure was 26 mmHg at time of UES opening. The mean duration of LES remaining relaxed was 6.7 s. The mean length of the esophagus between UES and LES was 26 cm. The mean distance between the TL and the LES was 18 cm, corresponding to on average 72% of the total length. The mean time that the peristaltic wave was before (negative value) the TL or after the TL when the LES opened was â0.5 s. The mean maximum pressure of the peristaltic wave was 138 mmHg. The time lag between UES and LES relaxation was never over 6.4 s. The individual LES pressure, as well as the maximum peristaltic pressure, varied remarkably from swallow to swallow (Table 1).

This study shows quite clearly that the LES becomes relaxed several seconds (on average 3.5 s) after the water bolus has passed the UES. This corresponds with findings by Nguyen et al [7] when impedance and manometry techniques were used. They found a mean latency between bolus entry into the esophagus and LES relaxation of 3.6 s. This is also in agreement with the esophageal transit time (3.8 s) as assessed with the biomagnetic technique[8]. The LES pressure did not change in our study at time of UES opening. Therefore, it seems unlikely that LES relaxation is triggered by the start of deglutition.

It seems as if opening of the LES coincides with the peristaltic wave front reaching close to the TL, which is an esophageal level with striated-to-smooth muscle fiber transition. Reasonably, this depends on the premise that the distal end of the water bolus has reached the LES, that the water bolus fills up the esophageal lumen between TL and LES, and that the peristaltic wave pushes the water bolus from behind against the LES gate. Only the combination of manometry and impedance measurement or the combination of HRM and radiography can find out whether LES relaxation and opening take place at the moment when the bolus arrives at the LES. In an impedance study of LES opening and bolus transit, it was found that LES relaxation seemed to be modulated by the bolus transit and occurred predominantly upon arrival of the bolus in the distal esophagus[7]. This discovery clashes with the findings by Pandolfino et al[9] who used a combined impedance/manometry technique. They showed that LES relaxation did not necessary coincide with bolus passage or LES opening. The hydrostatic pressure in the esophageal body necessary to open the LES in an upright position, as shown in a combined manometric and radiographic study from 1978[5], was approximately the same as the LES pressure before opening. If no deglutition activity took place and a contrast medium was instilled into the esophagus, the LES opened when the hydrostatic pressure exceeded the resting LES pressure and closed again when the hydrostatic pressure in an upright position fell short of the LES pressure. Deglutition caused the LES to relax and open when the peristaltic wave reached the upper level of the infused contrast medium. These different findings indicate that the LES is a barrier which is forced to open by the peristaltic pressure. In the clinic, this would explain why, for instance, patients with achalasia cardia or with lack of esophageal peristalsis do not have any LES relaxation after deglutition.

In conclusion, LES opening seems to be caused by the peristaltic wave pushing the bolus from behind against the LES gate. Therapeutic attention in patients with dysphagia of non-stricture origin should therefore be focused on esophageal motility function rather than on drugs affecting LES pressure.

Swallowing problems with food retention in the gullet are present in at least 8% of an adult population. For accurate treatment, it is of importance to know whether transit from the esophagus to the stomach can be treated with drugs aimed at opening the lower esophageal sphincter (LES) or whether transit is due to dynamic properties of gullet muscles. So far, it has been claimed that LES is triggered to open by a neurogenic reflex from the upper esophageal sphincter (UES).

The newly developed high-resolution manometry (HRM) system is a technical innovation and breakthrough for the understanding of dynamic esophageal events, meaning the interplay between esophageal motility and esophageal sphincter relaxations.

The esophageal HRM probe was used in ten non-dysphagic patients with dyspepsia in order to study the time relationship between UES and LES relaxation and to study where the peristaltic wave front was located when the LES relaxed after deglutition of a 10 mL water bolus in the supine position. These simultaneous activities have previously not been possible to study with conventional esophageal manometry.

The LES was shown to relax 3.5 s later than the UES after deglutition which is the average time it takes a water bolus front to reach the LES. The LES remained relaxed on average 6.8 s; that is until the propulsive force had faded away. The peristaltic front wave reached a level close to the transition level (TL), either 2 s before or 1 s after the TL.

Esophagus-gullet. Dyspepsia-a diagnosis without any specified organic lesion and with diffuse symptoms from the gastric region. Dysphagia-swallowing difficulties. HRM-a pressure catheter with a 36 cm long segment of sensors spaced 1 cm apart giving simultaneous pressure information of sphincter and muscular activity from a total of 432 locations from UES to LES. The pressure can be displayed as a color plot offering visual information of the esophagus and its sphincters very similar to an anatomic picture. LES-lower esophageal sphincter. Manometry-pressure measurement. Smooth muscle-a muscle under autonomic, non-volitional control. Striated muscle-a muscle under volitional control. TL, transition level-the level in the esophagus between the upper striated muscle level and the lower smooth muscle level which is located about 7 cm distal of the UES.

More emphasis on why HRM is a great technique and the knowledge it provides compared to conventional esophageal manometry has now been given in the Methods section. The reason why we believe that dyspepsia patients can be regarded as normal people with regard to esophageal transit studies is addressed in the Materials section. The previous conclusion, regarding older theories of a neurogenic reflex causing LES relaxation, has been omitted and basic data for this are given in the discussion.