AIM: To investigate glucose homeostasis and in particular gluconeogenesis in a large animal model of acute liver failure (ALF).

METHODS: Six pigs with paracetamol induced ALF under general anaesthesia were studied over 25 h. Plasma samples were withdrawn every five hours from a central vein. Three animals were used as controls and were maintained under anaesthesia only. Using 1H NMR spectroscopy we identified most gluconeogenic amino acids along with lactate and pyruvate in the animal plasma samples.

CONCLUSION: Our pig model of ALF is characterized by an altered gluconeogenetic capacity, an impaired tricarboxylic acid (TCA) cycle and a glycolytic state.

Acute liver failure (ALF) is a clinical syndrome defined by massive cell death in the absence of chronic liver disease, resulting in hepatic encephalopathy[1]. Although brain oedema and brain herniation are common causes of death in ALF multi organ failure is also common[2,3]. Previous studies have shown that metabolic pathways are affected in ALF and systemic changes in metabolite levels could be the pathophysiological reason behind multi organ failure in ALF[4-6].

Orthotopic liver transplantation remains the most widely accepted treatment for ALF[1,2,7]. Chronic donor shortages however, motivate the search for alternative non-surgical therapies. In that quest animal models of ALF play an important role. Most studies have explored mouse models of ALF which although useful do not adequately address the issue[4-6]. We have recently developed in our laboratory a porcine model of paracetamol induced ALF[7]. It is characterized histologically by severe centrilobular necrosis with coagulative necrosis. The animals invariably develop acidosis, hypoglycaemia, coagulopathy and acute renal failure.

Acidosis could be explained by lactate production and energy depletion in the liver of our animal model[5]. Coagulopathy is due to loss of production of factors of the coagulation cascade namely Factors V and VIII[8]. Acute renal failure is a characteristic of paracetamol overdose. Often patients develop acute renal failure through toxic injury and require dialysis in that setting without serious liver injury[9].

The hypoglycaemia observed in our model is a hallmark of disrupted hepatic glucose metabolism. Studies on other animal models of ALF and cirrhosis have shown that, despite a relative glucose homeostasis, there is a decrease in gluconeogenesis and tricarboxylic acid (TCA) cycle coupled with an increase in lactate production[6,10-12].

We hypothesized that there was a loss of gluconeogenetic capacity in our large animal model with an increase in lactate production, an inhibited TCA cycle and a switch to glycolysis during injury to compensate for energy demands.

Large white pigs (median body mass 35 kg) were used for this study. Animal experiments were performed in accordance with the Home Office regulations under the Animal (Scientific Procedures) Act 1986 as per Project Licence 60/2389. All animals received humane care and study protocols complied with our institution’s guidelines.

Our experimental model was described in detail elsewhere[7]. Briefly animals were anaesthetized with ketamine and midazolam as induction agents and maintained with isoflurane and nitrous oxide. Animals were hydrated with normal saline and glucose. All animals received similar amounts of glucose. Haemodynamic variables and intracranial pressure were continuously monitored.

Animals were pretreated with phenobarbital 20 mg orally for 5 d to induce cytochrome P450 activity. In six animals intravenous paracetamol was administered while the three animals used as controls were monitored but did not receive any paracetamol. A loading dose of paracetamol was administered by intravenous infusion (0.1875 g/kg) followed by an infusion for 12 h (1.8 mg/kg per min). Experiments lasted 28 h and at that time point any surviving animals were euthanized.

Samples were prepared by adding a D2O solution of (150 μL) to plasma (600 μL) thus providing an internal field frequency lock for the spectrometer. As a reference substance 20 μL of sodium 3-(trimethylsilyl 2, 2, 3, 3-2H4)-1 propionate (TSP) were added to the plasma. Chemical shifts were referenced internally to the singlet methyl resonance of TSP at zero ppm.

1H-NMR spectra were measured from plasma samples taken from a large central vein at 5 hourly intervals until the experiments were terminated at t = 28 h. Data were acquired on a Varian INOVA 600 NMR Spectrometer operating at 600 MHz for protons. All spectra were acquired at ambient probe temperature (298 ± 0.2 oK). For each sample 128 transients (FID’s) were acquired into 32 K complex data points over a spectral width of 6 KHz. 300 pulses were applied with an acquisition time of 2.5 s to achieve better resolution followed by an additional pulse recycle time of 4 s to allow for complete T1 relaxation. Water signal suppression was achieved by applying a gated secondary irradiation field at the water resonance frequency. Spectral assignments were made by reference to literature values of chemical shifts in various media and biological fluids and coupling constants[13]. The coefficient of variation between samples was < 6% and reproducibility for the same sample was good with a difference of < 2% on the same sample. The CMPG (Carr-Purcell-Meiboom-Gunn) sequence was applied for data acquisition, as this sequence enabled observation of a flat baseline in our spectra from plasma samples by minimising the signals acquired from macromolecules present in the plasma such as proteins and lipoproteins[14]. NMR spectra analysis was performed using the MNova platform for NRM analysis (Mestrelab, Santiago de Compostela, Spain).

To compare between groups in the initial sample the Student’s t-test for parameters with non-missing values and the Mann Witney U test for parameters with missing values were used. Values were expressed as mean (range and standard error). A P value of < 0.05 was taken as statistically significant (two-tail test of significance). Numeric results are expressed as μmol/L. All analysis was done using the SPSS statistical package (Version 9.0).

On all samples studied we were able to identify the following metabolites: lactate, pyruvate, leucine, isoleucine, valine, tyrosine, phenylalanine, histidine, arginine, glycine, alanine, threonine, glutamate and glutamine. Resonances from proline, methionine and ornithine were not suitably characterised and results from those amino acids are not available. Figure 1 shows a sample spectrum. 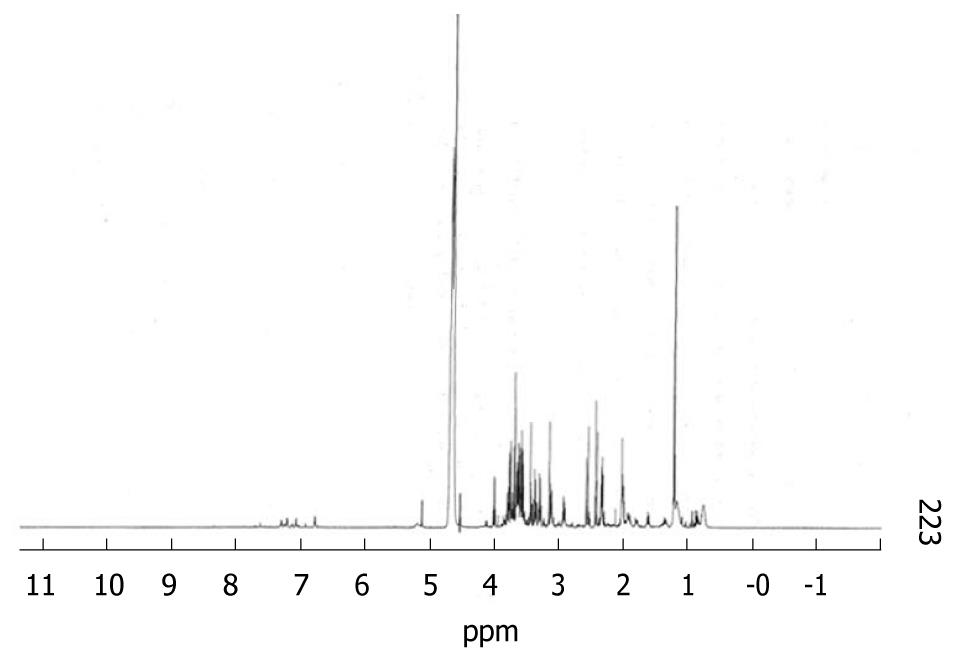 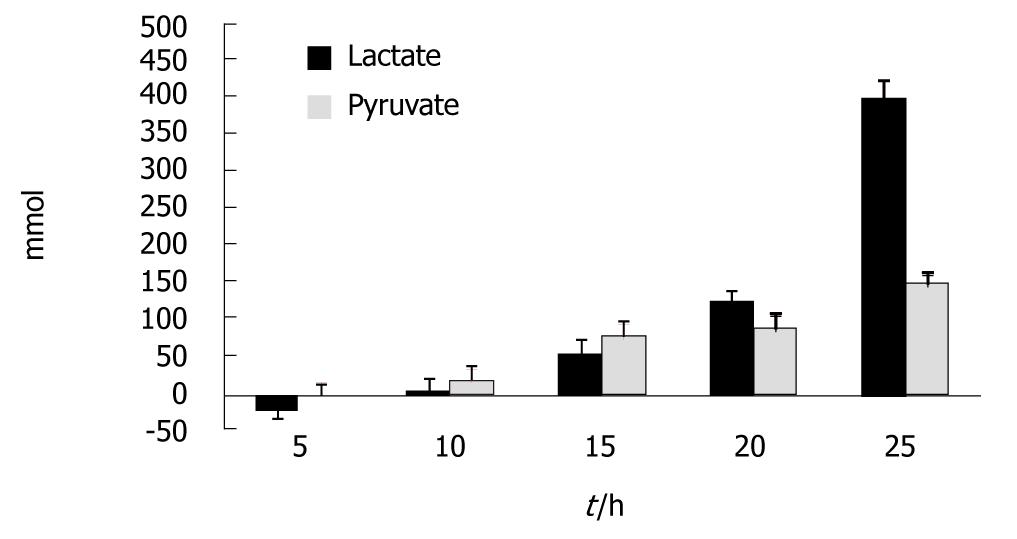 Figure 2 There was a net increase of lactate and pyruvate concentrations during the experiments.
Amino acids 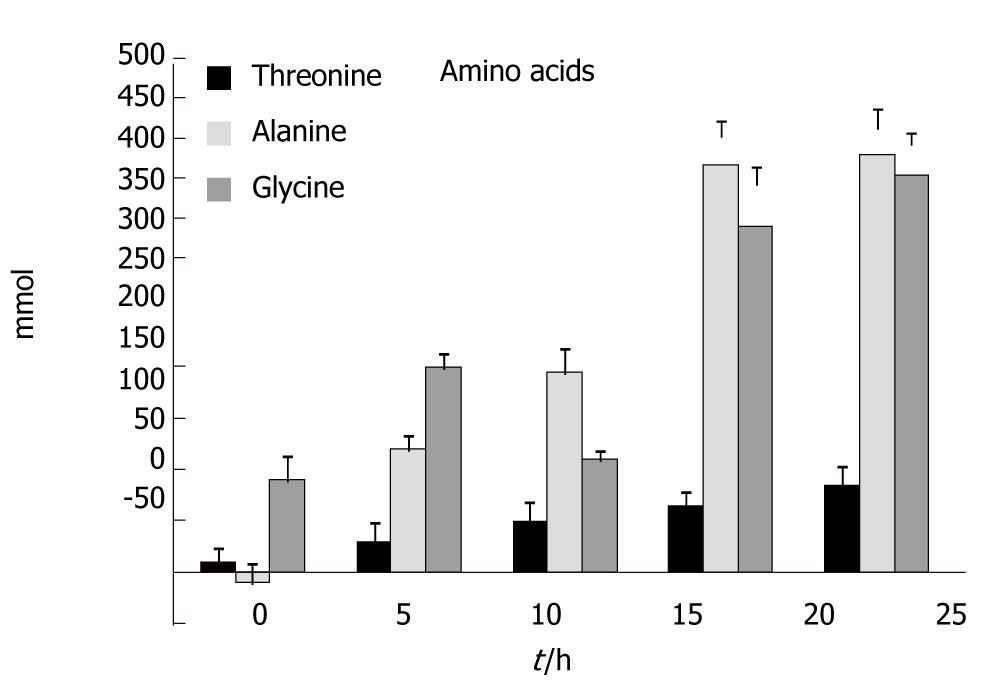 Figure 3 There was a net increase in the concentrations of alanine, threonine and glycine during the experiments. 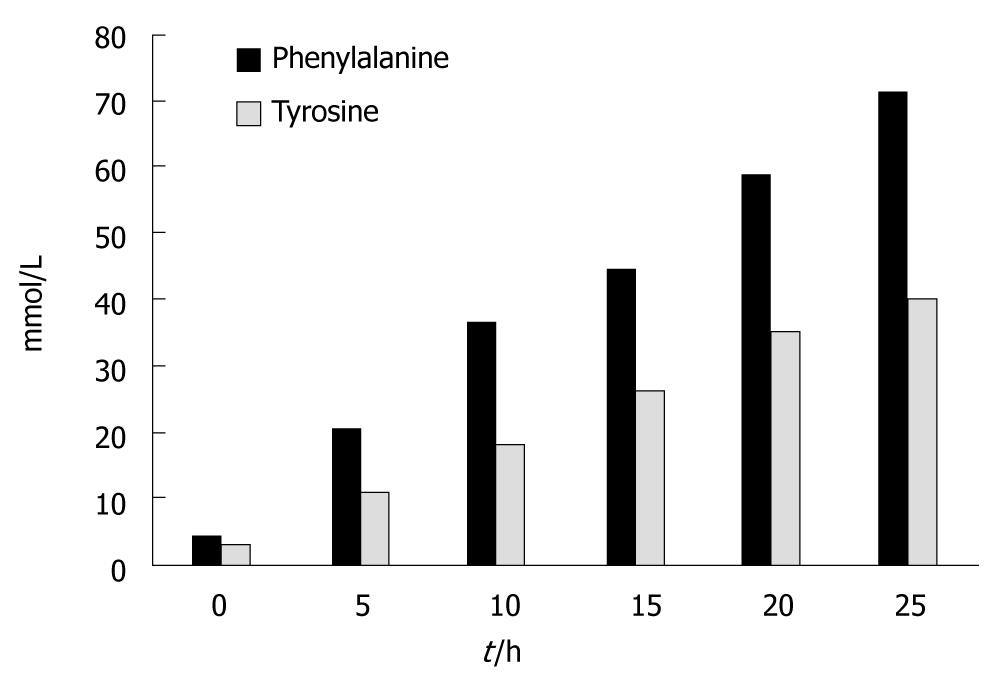 Figure 4 There was a net increase in the concentrations of tyrosine and phenylalanine during the experiments. 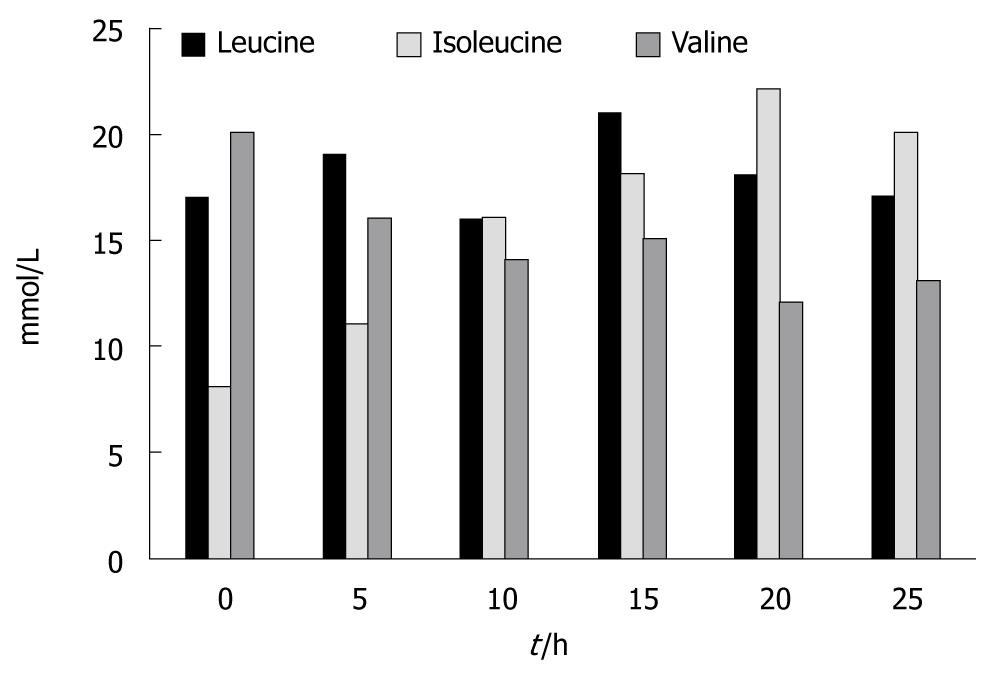 No statistically significant differences were observed in the concentrations of glutamate, glutamine, arginine and histidine up to the end of the experiments.

In our model the concentration of lactate, despite a temporary decline at the beginning of the experiments, increased quickly and was significantly increased at t = 15 h. Likewise, pyruvate concentration increased and that increase became significant at t = 20 h. This suggests that early on glycolysis is switched on in the liver. As paracetamol also affects the kidney and an early kidney toxic injury is usually seen in cases of paracetamol induced ALF[16], attempted compensatory gluconeogensis maybe occurring in the kidney but it is not sufficient to maintain normal glucose levels in this model of ALF.

We have also observed that major gluconeogenic amino acids were not taken up by the liver. Concentrations of alanine increased significantly throughout the study along with concentrations of threonine and glycine. Likewise the concentrations of the aromatic amino acids tyrosine and phenylalanine increased very early on and rose dramatically at the end of the experiments. This is in accordance with previous studies in mice that showed similar results[4-6,17]. This is a good indication that gluconeogenesis in the liver is impaired and the TCA cycle is not functioning properly.

ALF is characterized by the development of encephalopathy. In that respect Fischer’s ratio (the ratio of branch chain to aromatic amino acids) is believed to be a good index[18]. A decrease of the ratio is a good marker of severe hepatic encephalopathy. As we have shown previously in our model a significant decrease in the Fischer’s ratio was observed by t = 15 h of the experiments[7]. In a previous study we have shown that although in patients with non-paracetamol induced ALF all branch chain amino acids are increased, in patients with paracetamol induced ALF valine is an exception and decreases over time[19]. We believe our results to be in accordance with this observation. We should point out though that the attempts to correct hepatic encephalopathy with correction of the Fischer’s ratio by exogenous substation of branch chain amino acids were not a success and the reason might lie in the fact that it is the aromatic and not the branch chain amino acids that are disturbed[20].

An interesting finding was that we observed no significant changes in the concentrations of glutamate, glutamine, histidine and arginine, key metabolic components of the urea cycle. We unfortunately were unable to quantify aspartate but there is strong evidence that the urea cycle in this model remains largely unaffected by paracetamol poisoning. This is in accordance with other studies that have shown that ALF induced hyperammonemia is caused by gut production of ammonia, a by-product of the production of alanine from glutamate[21]. Novel attempts to correct the metabolic abnormalities of hepatic encephalopathy by providing ornithine as a substrate for urea synthesis might be a good path[22-25].

The major drawback of this study is that we performed a study that describes changes in amino acids that pertain to gluconeogenesis and that we assumed that the changes were provoked by the inhibition of gluconeogenesis by the acute liver injury. We had no means to exclude the possibility that some other metabolic function could be responsible for the observed amino acid disturbances.

In conclusion, in this large animal model of paracetamol induced ALF we have observed an inhibition of gluconeogensis in the liver with subsequent dysfunction of the TCA cycle. This has led to ATP and energy depletion and the liver switching to glycolysis to compensate. Further studies in animals and also in humans are needed to fully characterize the metabolic abnormalities of liver failure and to provide a pathophysiological basis for the new emerging metabolically centred therapies for hepatic encephalopathy[26].

Acute liver failure in humans is a deadly condition which could lead to multi-organ failure and death of the patient. Abnormalities in many metabolic pathways are known to exist but there are very few large animal models where the authors are able to reproduce the acute liver injury. Recently the authors have developed such a porcine model in our laboratory.

In this article the authors were able to provide some evidence that gluconeogenesis is impaired in a porcine model of acute liver injury as manifested by a relative increase in the plasma concentrations of the gluconeogenic amino acids. Gluconeogenic amino acids are the main substrate for glucose production after the exhaustion of glycogen stock very early in the acute liver injury.

This paper provides some insight into the metabolism in acute liver failure. It shows that gluconeogenesis a key metabolic pathway in paracetamol induced acute liver failure fails, early on in the disease. This needs to be confirmed in human studies and it could have implications in the way these patients are managed.