AIM: To compare the differences between dideoxy sequencing/KRAS StripAssay/pyrosequencing for detection of KRAS mutation in Chinese colorectal cancer (CRC) patients.

METHODS: Formalin-fixed, paraffin-embedded (FFPE) samples with tumor cells ≥ 50% were collected from 100 Chinese CRC patients at Beijing Cancer Hospital. After the extraction of genome DNA from FFPE samples, fragments contained codons 12 and 13 of KRAS exon 2 were amplified by polymerase chain reaction and analyzed by dideoxy sequencing, the KRAS StripAssay and pyrosequencing. In addition, the sensitivities of the 3 methods were compared on serial dilutions (contents of mutant DNA: 100%, 50%, 20%, 15%, 10%, 5%, 1%, 0%) of A549 cell line DNA (carrying the codon 12 Gly>Ser mutation) into wild-type DNA (human normal intestinal mucosa). The results of dideoxy sequencing, the KRAS StripAssay and pyrosequencing were analyzed by Chromas Software, Collector for KRAS StripAssay and the pyrosequencing PyroMarkTM Q24 system, respectively.

CONCLUSION: Taking a worldwide view of reports and our results, dideoxy sequencing remains the most popular method because of its low cost and high accuracy.

Colorectal cancer (CRC) is a common malignant tumor of the gastrointestinal tract, with yearly increasing morbidity and mortality in China. Recently, the development of targeted drugs (for example, cetuximab, panitumumab) has brought advancement in CRC therapy. Cetuximab, which targets the epidermal growth factor receptor (EGFR), shows activity in refractory CRC patients expressing EGFR[1], and in CRC patients with tumors that do not express EGFR immunohistochemically[2]. Thus, there is not an association between EGFR expression and cetuximab efficacy[2,3]. The activating mutations in exon 2 of KRAS play an important role in the progression of CRC, which can induce unlimited proliferation of tumor cells[4,5]. One study reported that KRAS mutations could become an independent prognostic factor in advanced CRC patients treated with cetuximab[6] and there was a significant negative association between KRAS mutations and cetuximab efficacy[7]. Some clinical trials, such as CRYSTAL, OPUS and EVEREST, demonstrated that CRC patients with wild-type KRAS could benefit from the addition of cetuximab to the standard chemotherapy regimen, but patients with mutated KRAS could not[8-10]. Thus, detection of KRAS mutations is strongly recommended before administration of cetuximab.

The mutation rate of KRAS is slightly different among different trials and different areas; for example, the prevalence of KRAS mutation was 35.6% in the CRYSTAL trial[8], but 42.3% in the CO.17 trial[11]; the frequency of KRAS mutation is about 40% in the United States, 34% in the Netherlands, 49% in France and 26.5% in Taiwan, China[12]. The KRAS mutation rate in Chinese CRC patients is about 37% according to our previous study (about 600 patients were studied) using dideoxy sequencing. Most mutations occur in codons 12 and 13 (about 95%), and only a few in codon 61 (about 5%)[13-15]. Up to now, many methods have been used to detect KRAS mutations, including dideoxy sequencing, polymerase chain reaction (PCR)-single-strand conformation polymorphism, PCR-restriction fragment length polymorphism (RFLP), pyrosequencing, denaturing high performance liquid chromatograph, and so on[16]. Along with the advancement of technology, many new kits have been developed, such as the DxS K-RAS Mutation Test Kit and the KRAS StripAssay, which brought new choices for researchers.

A total of 100 patients in Beijing Cancer Hospital with CRC confirmed by histopathology between October 2008 and August 2009 were investigated for KRAS mutations in our laboratory. Formalin-fixed, paraffin-embedded (FFPE) samples with ≥ 50% tumor cells were collected. An A549 cell line was preserved in our laboratory and normal intestinal mucosa was provided by the tissue bank of our hospital.

The concentrations of DNA from the A549 cell line and normal intestinal mucosa were determined by fluorometry. Serial dilutions were prepared by putting A549 cell DNA into wild-type DNA to produce dilutions with the following contents of mutant DNA: 100%, 50%, 20%, 15%, 10%, 5%, 1%, 0%.

A DNA fragment including codons 12 and 13 of the KRAS gene was amplified by PCR using primers (forward: 5'-biotin-TGACTGAATATAAACTTGTGGTAGTTG-3', reverse: 5'-TCGTCCACAAAATGATTCTGAA-3') with a product size of 91 bp. Each PCR reaction consisted of 10 × PCR buffer 5 μL, 10 mmol/L dNTPs 4 μL, Hotstart Taq 0.4 μL [Gene Tech (Shanghai) Company Limited], genomic DNA 4 μL, 10 mmol/L forward primer 0.5 μL, 10 mmol/L reverse primer 0.5 μL in a final volume of 50 μL. The cycling conditions were 95°C for 3 min, 45 cycles of 95°C for 10 s, 56°C for 20 s and 72°C for 30 s, final extension at 72°C for 5 min. The PCR products were determined by 3% agarose gel electrophoresis and ssDNA was prepared as described[16]. Mutation detection of KRAS codons 12 and 13 by the Pyrosequencing PyroMark™ Q24 system was done following the manufacturer’s instructions (see http://www.pyrosequencing.com/ for more information). 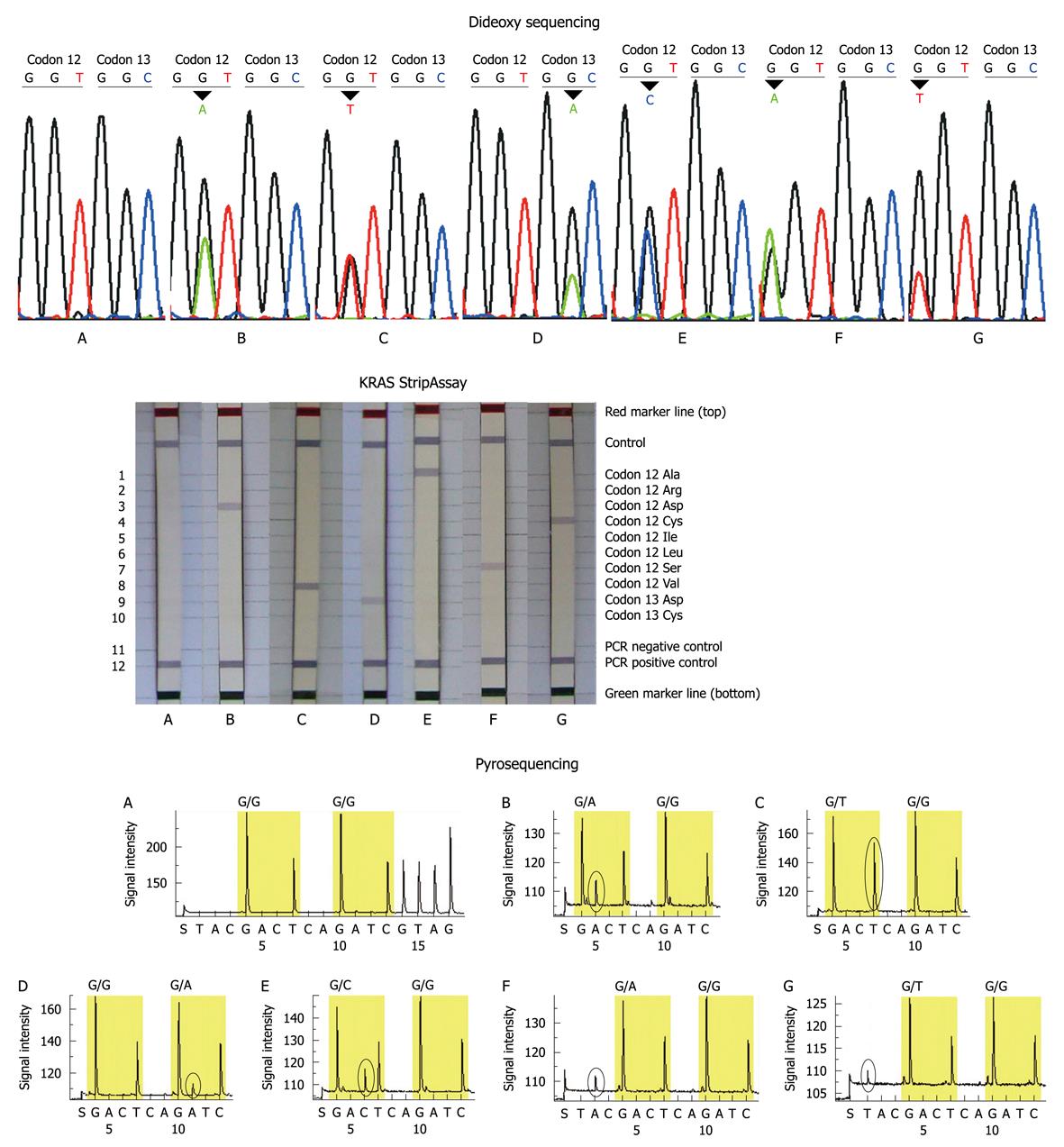 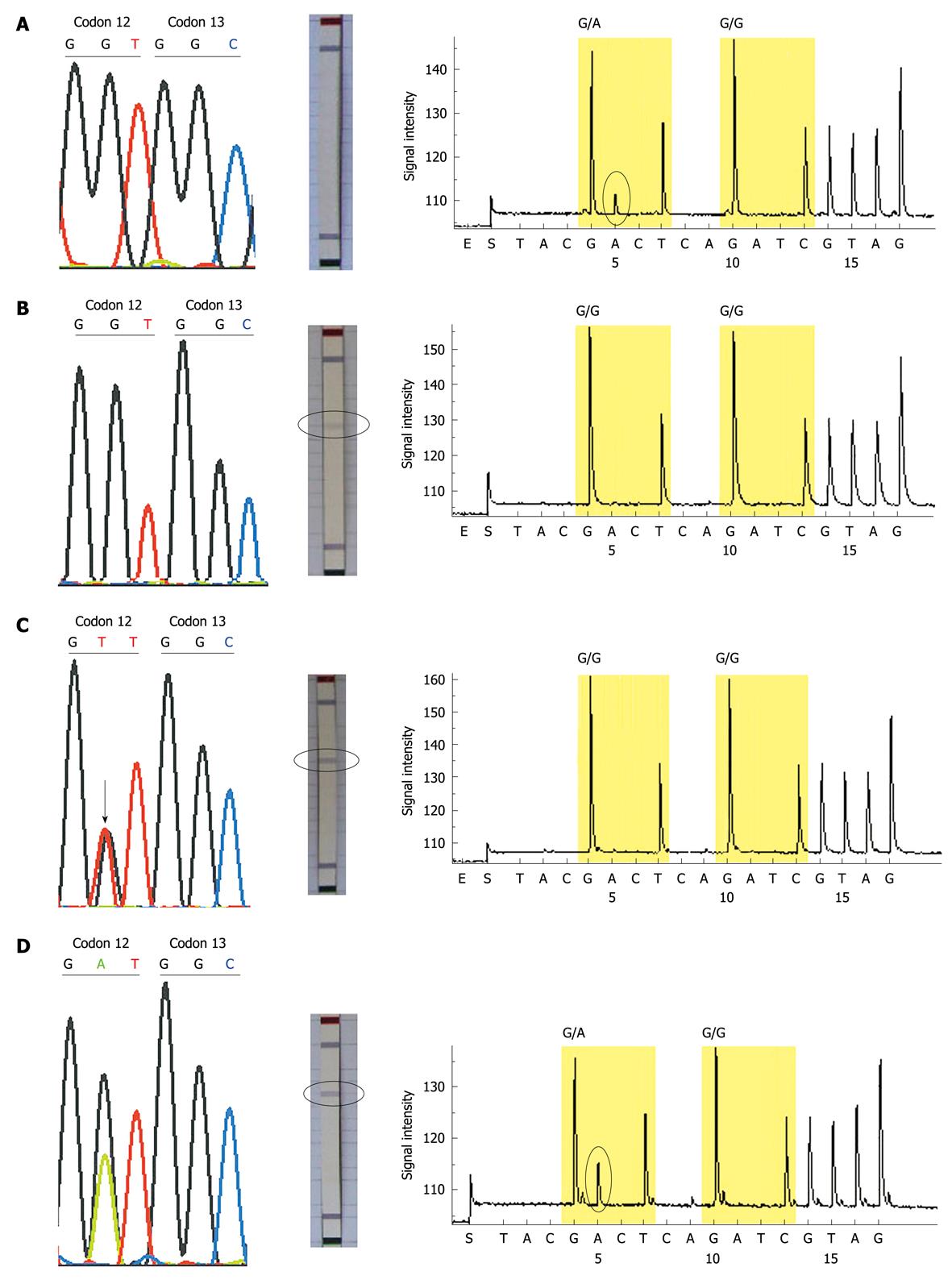 Along with national development and improvements in standard of living, morbidity and mortality of CRC has increased rapidly in China. The outcomes of the same treatment regimen in CRC patients were frequently found to differ, and thus it was important to develop individualized treatments. Because the effect of cetuximab was tightly associated with KRAS mutation status, the US Food and Drug Administration recommended that patients who were proposed for cetuximab treatment should undergo KRAS mutation analysis. As a result, besides the conventional methods, more and more techniques have been developed to detect KRAS mutation.

Recent reports have highlighted the advantages of the new methods, and we first compared dideoxy sequencing, the KRAS StripAssay and pyrosequencing for mutation detection in codons 12 and 13 of KRAS in Chinese CRC patients. The mutation rate of KRAS in our study was about 37%, and the mutation rate in females (about 43%) was higher than in males (about 30%) which was different from a report that KRAS mutation in males was higher than in females in Brazil[16].

The results from the 3 methods were similar, but a total of 8 patients had conflicting results between the 3 methods. We repeated these discrepant samples at least twice, the results being consistent. Because the results by dideoxy sequencing were consistent either with the KRAS StripAssay or with pyrosequencing, the results by dideoxy sequencing were likely to be more accurate. To support our hypothesis, we retrospectively analyzed the patients who were treated with cetuximab. Case 44 with KRAS mutation identified by pyrosequencing was treated with cetuximab and achieved a partial response after 6 weeks’ treatment. Because patients with KRAS mutations could not benefit from cetuximab, the result of case 44 by pyrosequencing may be a false positive.

Studies reported that the KRAS mutation could be used as a prognostic marker in non-small cell lung cancer and as an independent prognostic factor for CRC patients treated with cetuximab[6,19]. Whether there is a relationship between KRAS mutations and prognosis in Chinese CRC patients needs to be studied further.

At present, more and more colorectal cancer (CRC) patients are treated with cetuximab [a monoclonal antibody of epidermal growth factor receptor (EGFR)]. It had been confirmed that KRAS mutated patients could not benefit from cetuximab, so the US Food and Drug Administration recommended that patients proposed for cetuximab treatment should undergo KRAS mutation analysis.

Recently, many reports have highlighted the advantages of new methods, and disregarded the traditional methods in the detection of KRAS mutation. This was the first study to compare the differences between dideoxy sequencing, the KRAS StripAssay and pyrosequencing in KRAS detection. The study indicated that although the sensitivity of dideoxy sequencing was lower than the other 2 methods, it was still widely used by many researchers because of its superior accuracy.

The study could help researchers to choose a suitable method for detection of KRAS mutation according to the sample size, equipment platform and economic status, etc. In their opinion, dideoxy sequencing could be easily carried out in any laboratory.

In normal physiological conditions, KRAS is regulated by its upstream protein EGFR and plays an important role in the development and progression of tumors. Cetuximab could inhibit the tumors through blocking EGFR and the downstream signal pathway. If KRAS was mutated, KRAS protein was activated without the regulation of EGFR, so cetuximab could not have an effect.