AIM: To study the demographic and endoscopic characteristics of patients with sessile serrated adenoma (SSA) in a single center.

METHODS: Patients with SSA were identified by review of the pathology database of Mayo Clinic Arizona from 2005 to 2007. A retrospective chart review was performed to extract data on demographics, polyp characteristics, presence of synchronous adenomatous polyps or cancer, polypectomy methods, and related complications.

RESULTS: One hundred and seventy-one (2.9%) of all patients undergoing colonoscopy had a total of 226 SSAs. The mean (SE) size of the SSAs was 8.1 (0.4) mm; 42% of SSAs were ≤ 5 mm, and 69% were ≤ 9 mm. Fifty-one per cent of SSAs were located in the cecum or ascending colon. Approximately half of the patients had synchronous polyps of other histological types, including hyperplastic and adenomatous polyps. Synchronous adenocarcinoma was present in seven (4%) cases. Ninety-seven percent of polyps were removed by colonoscopy.

CONCLUSION: Among patients with colon polyps, 2.9% were found to have SSAs. Most of the SSAs were located in the right side and were safely managed by colonoscopy.

Colorectal carcinoma (CRC) follows the adenoma-carcinoma sequence[1] in the majority of patients. CRC development secondary to DNA microsatellite instability (MSI-high) with a deficiency of DNA mismatch repair occurs only in a minority of patients[2,3]. MSI-high carcinoma usually progresses along the “serrated pathway”[4-6]. Historically, hyperplastic polyps (HPs) have usually been regarded as non-neoplastic lesions with no malignant potential. However, some lesions previously diagnosed as HP but with malignant potential, which are now known as “sessile serrated adenomas” (SSAs), are increasingly being recognized[7,8]. SSAs may develop MSI as they progress toward carcinoma, and are potential precursors of sporadic microsatellite unstable CRC. Clinical and demographic characteristics including age, sex, racial distribution, endoscopic characteristics (location, gross appearance), recurrence rate, and the rate of progression of these polyps to carcinoma are not well known. There are no published consensus practice guidelines, and the optimal surveillance colonoscopy interval of these polyps is unknown, due to the paucity of clinical information regarding these patients.

The aim of our study was to identify demographic and endoscopic characteristics of patients with SSA in a single center and report the clinical experience with SSA in a large group practice.

Patients with SSA were identified by review of an institutional pathology database from the years 2005-2007. Patient charts were reviewed for data on demographics and colonoscopy details. Colonoscopy reports were reviewed to obtain the number, size, and location of polyps, as well as the morphological appearance and the polypectomy methods. In addition, data were collected on synchronous adenomatous polyps or cancer, and the number of colonoscopies needed to eradicate the polyps, the need for surgical therapy, and colonoscopy-related complications. All colonoscopies were done with standard white light examination technique with standard definition colonoscopes. SSA was defined in practice and in this report as polypoid lesions that lacked typical or conventional dysplasia, but that showed architectural features of disordered growth[9,10]. These features are: basal crypt dilatation, horizontal orientation of deep crypts, prominent serration extending deep into the crypts, irregular crypt branching, and inverted crypts. Other criteria consistent with abnormal proliferation were also useful in the diagnosis of SSA; these were nuclear atypia and/or oval nuclei in mid/upper crypts, prominent nucleoli in middle/superficial crypts, dystrophic goblet cells, irregular distribution of goblet cells, mitoses in mid/upper crypts, and excessive crypt or luminal mucin (Figure 1). We classified the polyps as SSA even if the diagnostic changes were only identified focally. 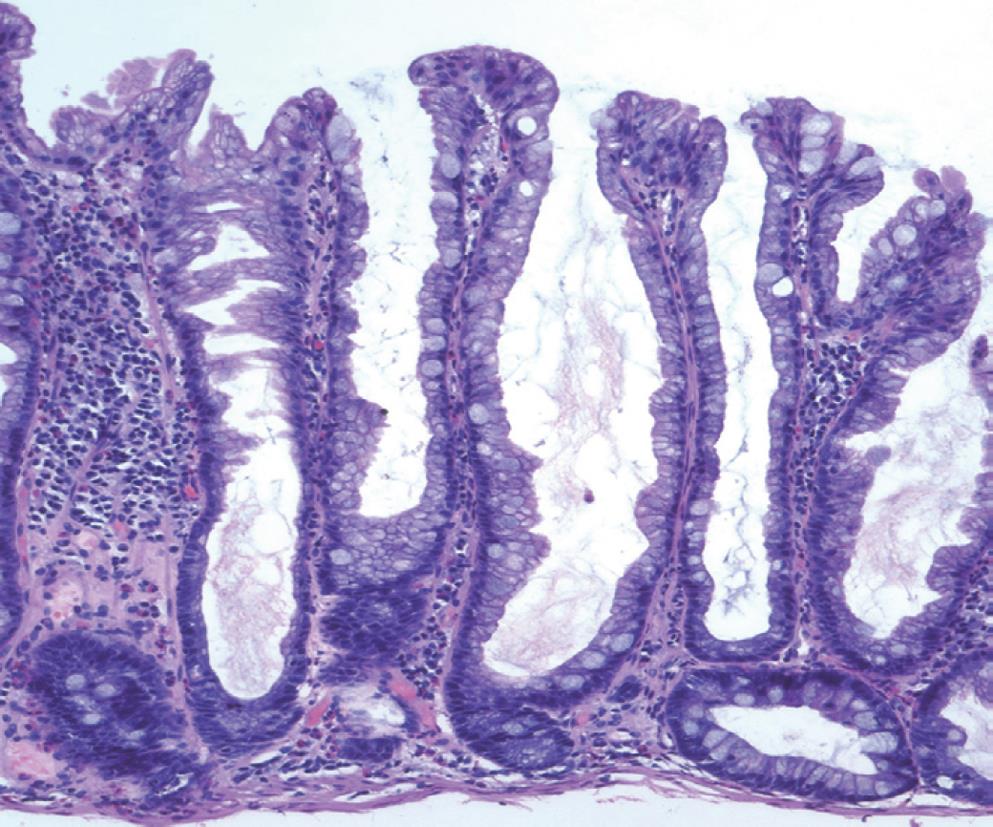 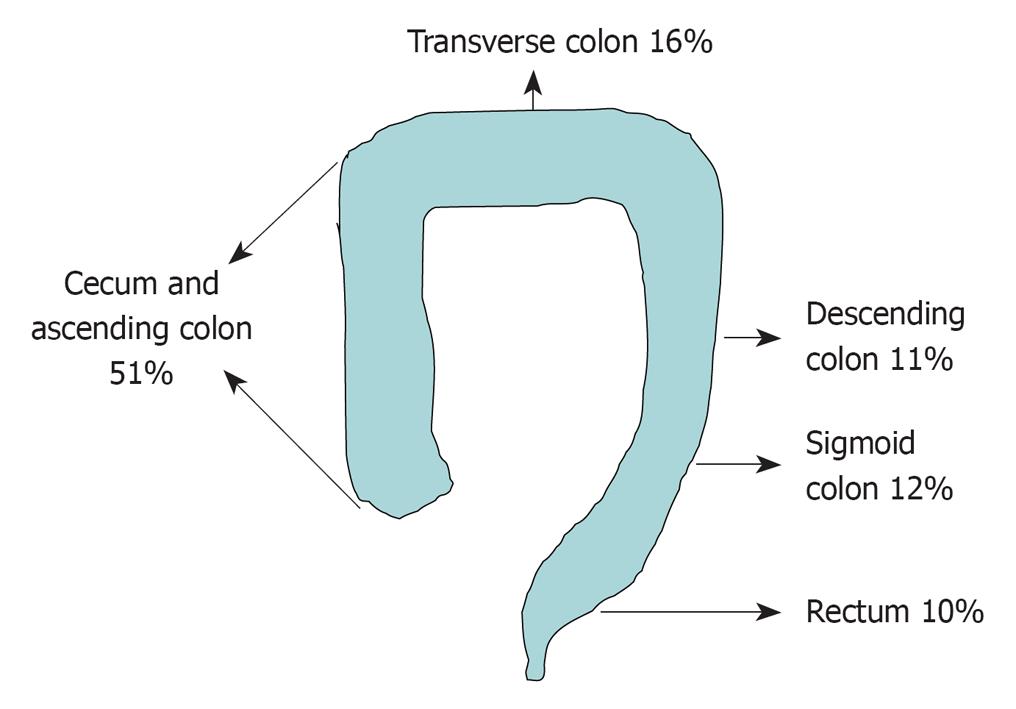 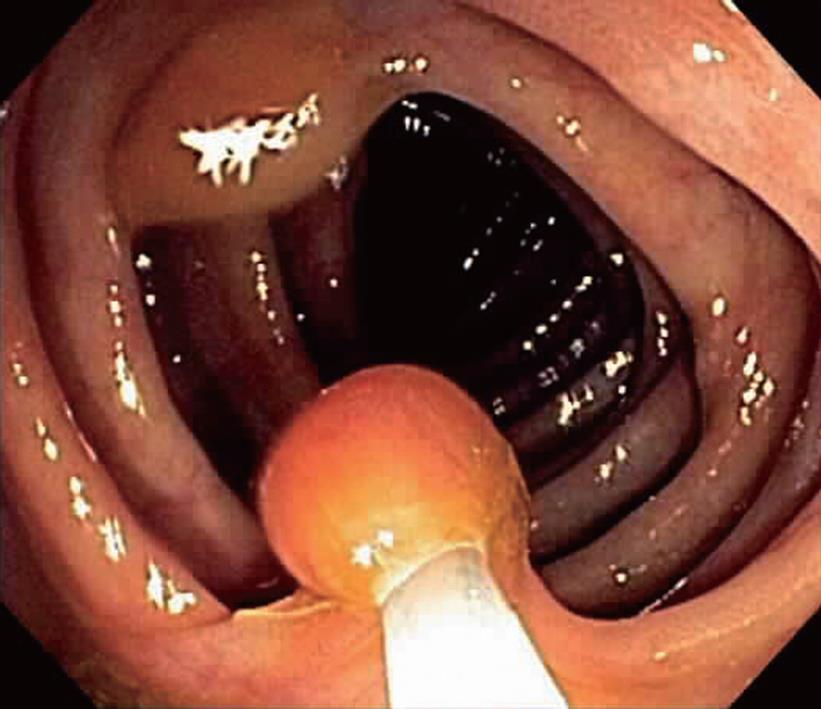 Thirty-one percent of SSAs were removed by cold biopsy/cold snare, 4% by hot biopsy, 63% by snare cautery, and 2.7% required surgical excision due to size or associated malignancy. Polyp removal techniques depended on the judgment and preference of the endoscopist. All polyps ≥ 2 cm in size were removed by saline-assisted polypectomy. There were no complications associated with the endoscopic resection of the SSAs. Although up to nine pathologists interpreted the histopathology of these polyps, the majority (75%) were diagnosed as SSA by two highly experienced gastrointestinal pathologists. In the clinical practice of pathologists interpreting specimens, in 12.6% cases, the diagnosis of SSA was confirmed in consultation by a second pathologist within the department.

Colorectal serrated polyps are a group of morphologically related lesions that include aberrant crypt foci, conventional HPs, advanced serrated adenomas (ASAs)[11] and SSAs. These lesions share some histological features, however, they differ significantly at the molecular level, and are biologically distinct[12]. In 1990, Longacre and Fenoglio-Preiser[13] first used the term serrated adenoma. While many patients probably had serrated lesions described as hyperplastic in the past, some have mixed hyperplastic and adenomatous features. Unfortunately, often there is significant disagreement among pathologists in the diagnosis of these polyps. In a study of 185 serrated polyps, five gastrointestinal pathologists had only moderate overall agreement (κ = 0.58), with near perfect agreement on traditional serrated adenoma, also called ASA, but varying most in the SSA and hyperplastic categories[14]. In our study, the majority of these polyps (75%) were diagnosed as SSA by two experienced gastrointestinal pathologists, however, up to nine pathologists interpreted the histopathology of polyps. In 12.6% of our cases, a second pathologist’s opinion was obtained by intradepartmental consultation for diagnosing SSA, which suggests difficulty in day to day clinical interpretation using standard published criteria. Simple standardized diagnostic criteria and terminology could improve interobserver agreement among pathologists, and represent a limitation in the interpretation of this study, and an opportunity for improvement in overall clinical practice.

In the present study, approximately 3% of all polyps were SSAs, which is similar to previous studies[15,16]. However, a prospective study using magnifying chromoendoscopy has reported a 9% prevalence of SSAs[17]. All examinations in our study were performed with standard white light colonoscopes, and the diagnosis of SSAs was made in real time clinical practice between 2005 and 2007. Polyps in the database were not re-examined, which could have changed the actual prevalence. Endoscopically, SSAs commonly appear flat or sessile, have a soft, smooth surface, and are often covered with mucus, which gives an initial yellow appearance[9]. Small, flat, right-sided lesions potentially can be missed by white light colonoscopy. Newer techniques such as high definition colonoscopy, narrow band imaging or chromoendoscopy could help to distinguish these polyps from normal mucosa.

The majority of patients with SSA in our study had multiple SSAs (mean = 3, range = 1-24). Approximately half of these patients also had synchronous polyps of other histological type, such as tubular adenoma, TVA and HPs. Synchronous right-sided adenocarcinoma was seen in 4% of cases.

As noted in other studies[15,18,19], the majority (67%) of SSAs in our study were located proximal to the splenic flexure. Forty-two percent of all SSA were ≤ 5 mm, and 69% were ≤ 9 mm in size. In a study of 13 992 colonoscopies from the Clinical Outcomes Research Initiative (CORI) repository[20], when pathology results were available, 1.7% of polyps that measured 5 mm (n = 3744) had advanced neoplasia [one cancer, one high-grade dysplasia (HGD), 44 TVA]. In polyps 6-9 mm in size (n = 1198), 6.6% had advanced neoplasia (two cancers, nine HGD, and 53 TVA), which suggests that not all small polyps are innocent. The natural history of SSAs is not well understood. Although carcinoma associated with advanced serrated adenoma has been reported to be a distinct type of neoplasm, which accounts for 5.8%-7.5% of all colorectal carcinomas and up to 17.5% of proximal colon cancers[21,22], the overall impact of SSAs on cancer risk is not known because of a lack of data on their true prevalence. There have been reports of rapid progression of SSA to invasive cancer as early as within 8 mo [23]. The current surveillance interval recommendation[24,25] for small SSAs is mainly based on indirect evidence, and is similar to that for small adenoma (5 years). Surveillance of large SSAs or more than three SSAs is similar to large or advanced adenoma (3 years).

The retrospective design and lack of long-term longitudinal follow-up data are major limitations of our study. Demographically, our patient population was predominantly Caucasian and above ideal body weight. These factors could limit the applicability of our results to other populations. Future large prospective studies are needed to understand the natural history of SSAs and to establish clinical practice guidelines for optimal cost-effective management and surveillance of patients with SSA.

Colorectal carcinoma (CRC) usually follows a sequence of development from adenomatous polyp to carcinoma. In a minority of patients, CRC development occurs due to alterations of small areas of DNA known as microsatellite instability (MSI). These patients have a defect in their DNA repair mechanism. Carcinomas that develop by this mechanism often have a special serrated appearance. One type of polyp with a serrated appearance, hyperplastic polyps (HPs), have usually been regarded as non-neoplastic lesions with no malignant potential. However, some lesions previously diagnosed as HPs, but with malignant potential, are now known as sessile serrated adenomas (SSAs), and are increasingly being recognized. SSAs can develop MSI as they progress toward carcinoma, and are potential precursors of sporadic microsatellite unstable CRC.

SSA are uncommon colon polyps. The clinical and demographic characteristics of patients with these polyps, including age, sex, racial distribution, endoscopic characteristics (location, gross appearance), recurrence rate, and rate of progression of these polyps to carcinoma are not well known, and were evaluated in this study.

Between 2005 and 2007, 171 (2.9%) patients undergoing colonoscopy had a total of 226 SSAs. The average size of the SSAs was 8.1 mm. Forty-two percent of SSAs were ≤ 5 mm and 69% were ≤ 9 mm. Fifty-one per cent of SSAs were located in the cecum or ascending colon. Approximately half of the patients had coexisting colon polyps of other histological types, including hyperplastic and adenomatous polyps. Coexisting adenocarcinoma was present in seven (4%) cases. Ninety-seven percent of polyps were removed by colonoscopy.

Most of the SSAs were located in the right side of the colon and were safely managed by colonoscopy. Concurrent lesions including adenomas and right-sided colon cancers were not uncommon. The natural history of SSAs is being learned, and greater concern about small polyps might exist in the future, as some can be aggressive or associated with other lesions.

This is an extensive study of a very important topic. The disadvantage of the study is its retrospective nature; especially concerning the endoscopic findings and follow-up.