Pancreatic tumors with combined exocrine and endocrine features are rare. Most reported cases are classified as mixed exocrine and endocrine carcinoma of the pancreas. We report the first case of solitary concomitant endocrine tumor and ductal adenocarcinoma of the pancreas. A 58-year-old patient was admitted for uncontrolled diabetes mellitus and body weight loss. The tumor was fortuitously discovered in the pancreatic tail after a tumor survey panel. Grossly, the solitary tumor had a central fibrous band that clearly divided it into two parts. On microscopic examination, the tumor contained both endocrine and exocrine components distinctly separated by the central fibrous band. The exocrine part showed a poorly-differentiated adenocarcinoma. The endocrine part was strongly immunoreactive to chromogranin, synaptophysin and glucagon. We reviewed the literature on pancreatic tumors with combined exocrine and endocrine features. A simple classification for this group of neoplasms is suggested, including five types: amphicrine, mixed, collision, solitary concomitant and multiple concomitant.

A 58-year-old Chinese male was admitted to the endocrinology and metabolism ward in July 2009 for poorly controlled hyperglycemia, which was refractory to an oral hypoglycemic agent. He had a history of diabetes mellitus (DM), hypertension and chronic renal insufficiency for more than 4 years and had been receiving regular follow-up at the outpatient clinic of this hospital. On admission, laboratory test (Table 1) revealed that his blood glucose was 561 mg/dL. Physical examination showed no skin rash or oral lesions. While he was hospitalized, daily high-dose insulin injection with Novomix 60 U/d was necessary to control his blood glucose level. The patient also complained of losing 10 kg of body weight in the prior two months. Therefore, he asked for a tumor marker examination. A tumor survey panel revealed an elevated carbohydrate antigen 19-9 (CA19-9) of 195 U/mL (normal, 0-37 U/mL) incidentally. Abdominal computed tomography (CT) demonstrated a 3.7 cm × 2.1 cm tumor in the pancreatic tail (Figure 1) and unremarkable adrenal glands bilaterally. Whole body positron emission tomography showed moderately increased accumulation of fluorine-18 fluorodeoxyglucose (F-18 FDG) in the pancreatic tail with standard uptake values of 3.3 (initial) and 4.5 (delayed). No increased uptake in other organs or sites was identified. Thyroid ultrasound showed no focal lesion. The patient received distal pancreatectomy and splenectomy under the impression of pancreatic tail carcinoma. Neither liver metastasis nor peritoneal seeding was found during surgery. The postoperative course was uneventful. Initially, only an oral hypoglycemic agent was prescribed for controlling DM when the patient was discharged from the hospital. However, because hyperglycemia (268 mg/dL) and elevated glycosylated hemoglobulin HbA1c (8.1%) were found at follow-up in the outpatient clinic, insulin injection with Novomix 28 U/d was represcribed. The patient moved to another city for family support and admitted there one month after operation. Therefore we lost the follow-up of him. 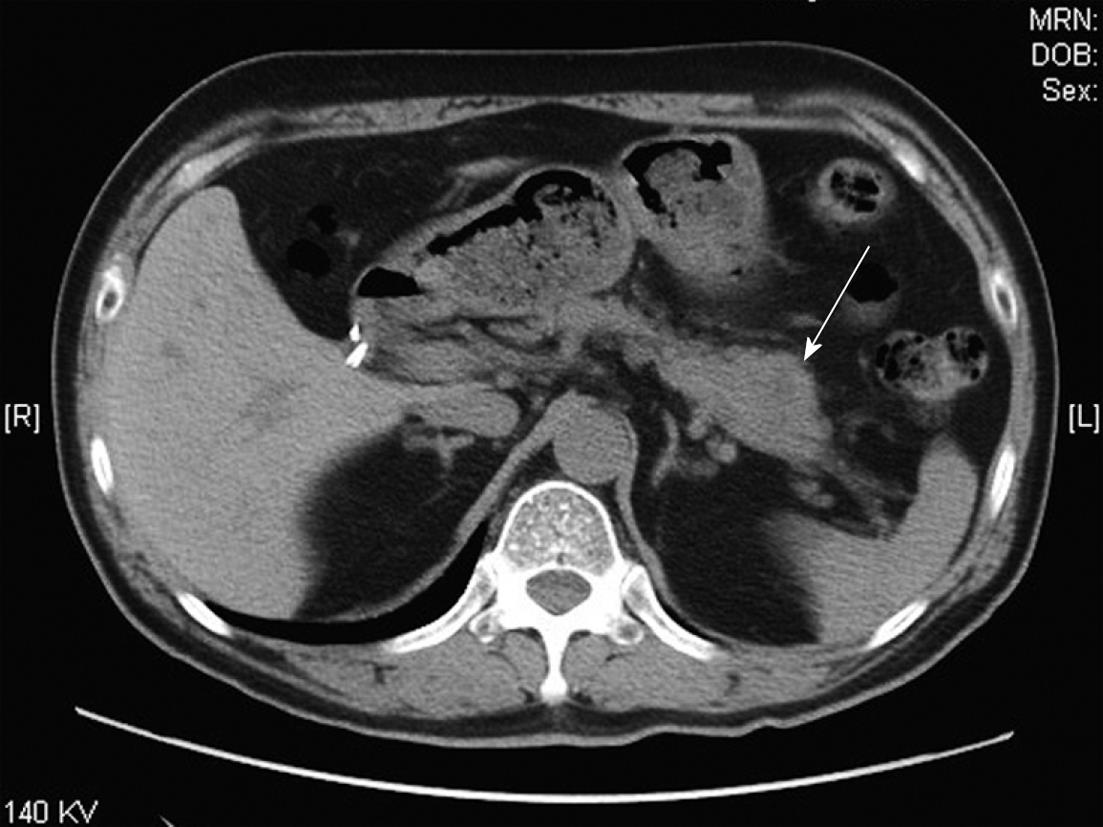 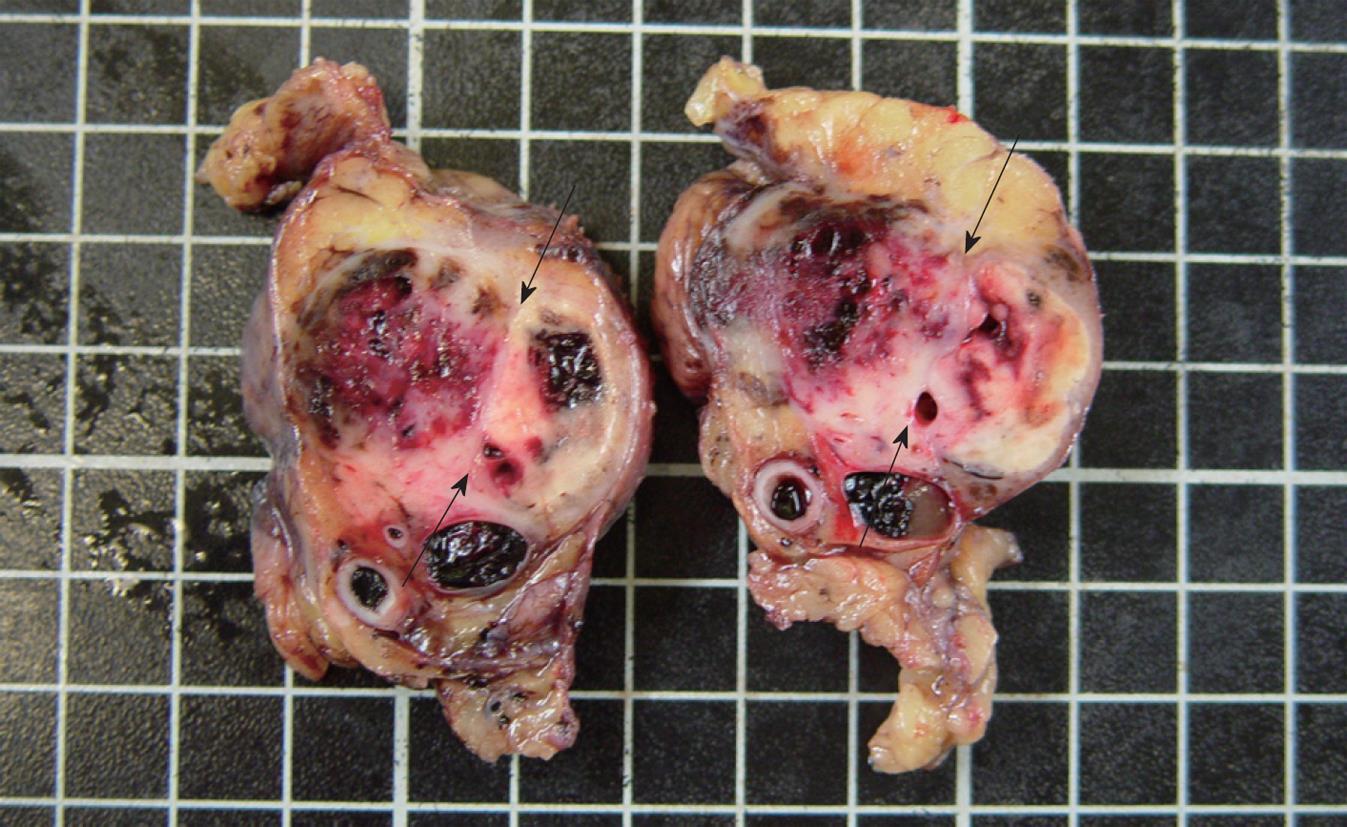 The microscopic sections showed pancreatic tissue with a partially encapsulated tumor composed of two distinctly separated, exocrine and endocrine components (Figure 3A). The two components did not grow into each other and were completely separated by a small band of fibrous tissue and some residual, atrophic, benign exocrine glands. The endocrine part, up to 1.8 cm in diameter and occupying more than 40% of the pancreatic tumor, was well-circumscribed, completely enclosed by fibrous tissue and composed of uniform tumor cells containing small, round, monotonous nuclei and pale or mildly acidophilic cytoplasm (Figure 3B). These cells were arranged in gyriform or trabecullar patterns divided by slender fibrous connective tissue and rich vascular stroma. Neither mitotic figures nor cellular atypia was found. No evidence of necrosis, extrapancreatic spread or vascular invasion was present. Mucin and congo red stains were negative. On immunohistochemical (IHC) staining, the tumor cells were diffusely and strongly positive for chromogranin A (Figure 3C), synaptophysin (Figure 3D) and glucagon (Figure 3E). No expression of CA19-9 (Figure 3F), p53, Bcl-2, insulin, gastrin, vasointestinal peptide was demonstrated in the tumor. Ki-67 + cells were less than 0.5%. The exocrine component, a poorly-differentiated ductal adenocarcinoma, showed bizarre and hyperchromatic cells containing pleomorphic darkly staining nuclei, some mitoses and pale or acidophilic cytoplasm (Figure 3G). Scattered anaplastic nuclei were also found. These tumor cells were arranged in dilated ductal structures, small glands, cellular files or single cells, with large areas of necrosis and hemorrhage. The exocrine component showed focal invasion of peripancreatic soft tissue. The spleen and 9 peripancreatic lymph nodes were free of tumor. Mucin secretion was demonstrated by mucicarmine and periodic acid-Schiff with diastase stains. On immunohistochemical staining, this component was strongly positive for CA19-9 (Figure 3H), and negative for chromogranin A (Figure 3C), synaptophysin (Figure 3D), glucagon (Figure 3E), insulin, gastrin, vasointestinal peptide and Bcl-2. Ki-67 + cells were more than 25%. More than 55% of the ductal adenocarcinoma had strong intranuclear accumulation of p53 protein. In this case, the exocrine and endocrine components were clearly separated and different from each other in the single tumor. No collision or intermixing area could be found. With no other endocrine manifestations and focal lesion found in the thyroid and adrenal glands, MEN type 1 was not considered. Finally, a solitary concomitant endocrine tumor and ductal adenocarcinoma of the pancreas was diagnosed. 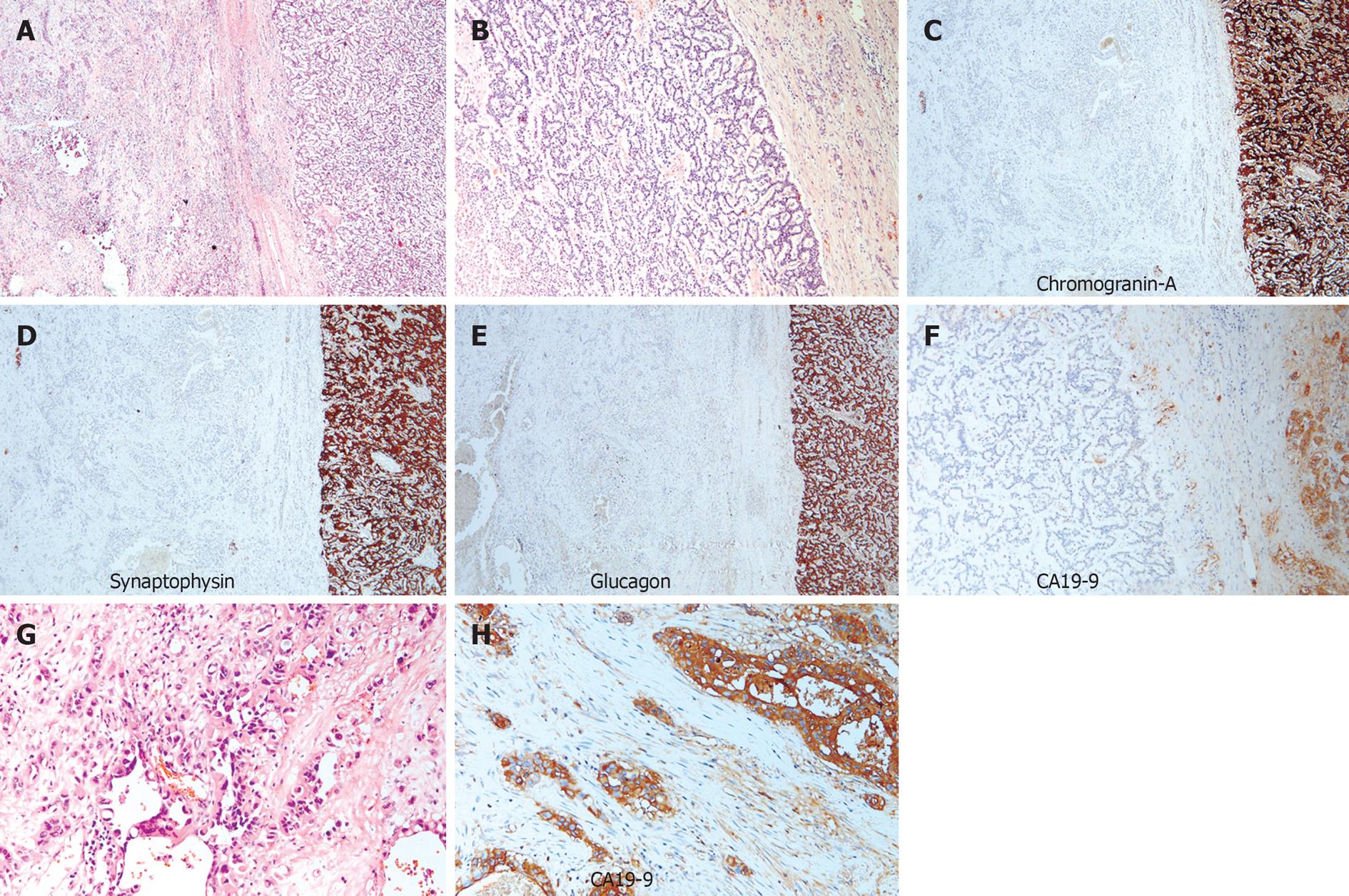 To the best of our knowledge, this is the first case of solitary concomitant PET and ductal adenocarcinoma of the pancreas reported in the English literature. Ballas et al[9] reported a case of mixed exocrine-endocrine tumor of the pancreas showing two distinct populations of tumor cells. Most parts of these two components were separated but focally showed a collision type of growth, with two different components growing into one another. Goh and colleagues[10] reported three cases of concomitant intraductal papillary mucinous neoplasm (IPMN) of the pancreas and pancreatic endocrine neoplasm. The sizes of the endocrine part were small (2, 5 and 8 mm) and well-circumscribed, isolated and nonfunctional. However, the morphology of all three exocrine components was not indicative of classical invasive ductal carcinoma as the present one. 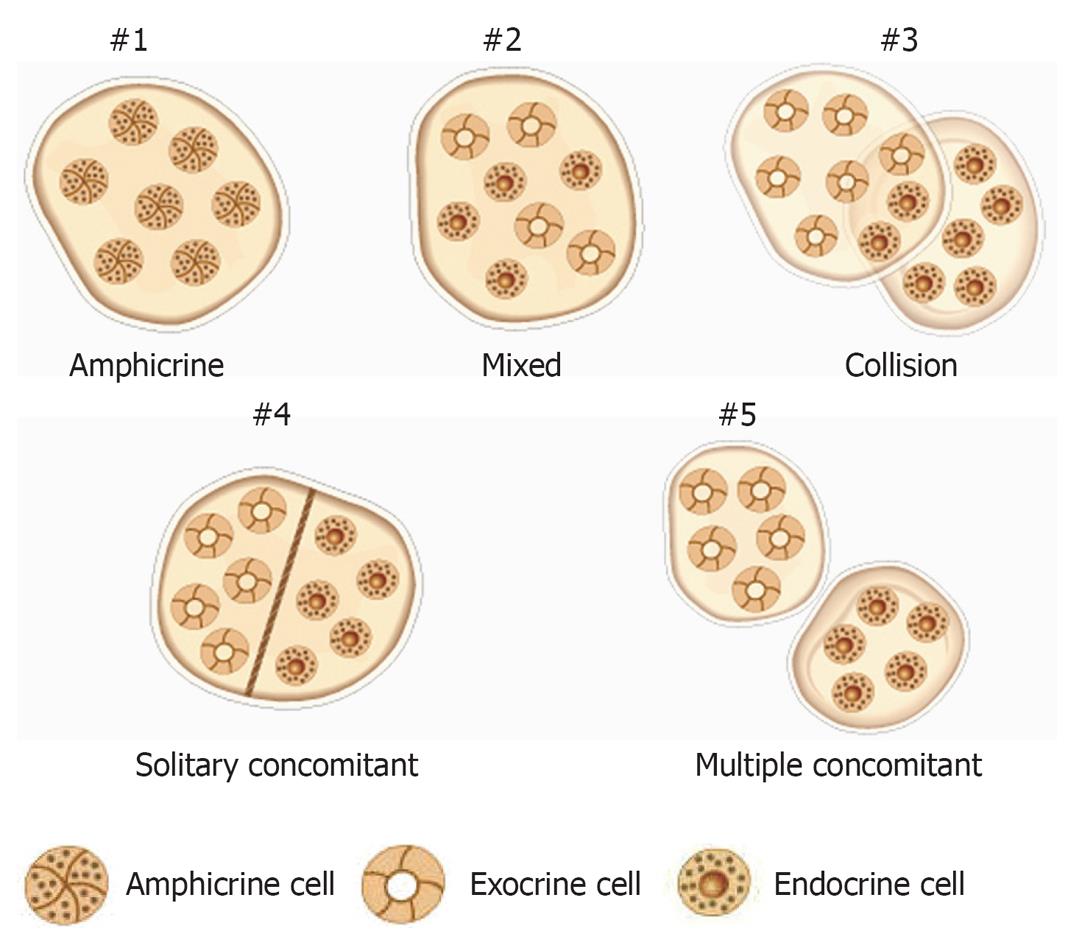 Because the present tumor contained both pancreatic endocrine tumor and exocrine carcinoma, we tried to consider these two parts together when discussing the prognosis of this patient. No evidence of metastasis was found at abdominal CT, whole body positron emission tomography scan and during surgery. The size of the present endocrine tumor was 1.8 cm. The microscopic features showed scarce mitoses and less than 0.5% Ki-67+ cells. Neither extrapancreatic spread nor vascular invasion was identified. According to criteria of the WHO Committee for Histological Typing of Endocrine Tumors, the present endocrine tumor was classified as a well-differentiated endocrine tumor with benign behavior[1]. In the previous literature and papers presenting cases of mixed exocrine and endocrine carcinoma, the authors suggested that the prognosis depends mainly on the stage of ductal carcinoma[2,8,9]. We cannot be certain that the prognosis of our case depends on the ductal carcinoma component because this is not a case of mixed exocrine and endocrine carcinoma of the pancreas as previously presented. Further study with more cases is necessary.

Chatelain et al[2] presented a case of mixed ductal-pancreatic polypeptide-cell carcinoma of the pancreas. In their study, the endocrine cells were not immunoreactive to p53 and Bcl-2, but the exocrine ductal cells were stained strongly positive, suggesting that over-expression of p53 and Bcl-2 plays a major role in neoplastic progression of the ductal component. We performed p53 and Bcl-2 immunostains in the present case. The endocrine part was negative for p53 and more than 55% of exocrine neoplastic cells showed strong intranuclear accumulation. However, both the endocrine and exocrine parts were negative for Bcl-2. The role of p53 and Bcl-2 in tumor histogenesis still needs further investigation.

Glucagonomas are rare and only represent about 10% of all functioning pancreatic tumors[15-17]. Cases without typical symptoms usually remain undiagnosed, resulting in long-term medical waste, and mental and physical suffering of the patients[18,19]. In our case, the patient only presented with DM and body weight loss and did not satisfy the criteria of glucagonoma syndrome. However, it was not certain whether the alpha-cell tumor plays a role in the manifestation of DM or not. In a recent study of pancreatic cancer-associated DM, Pannala et al[20] concluded that pancreatic cancer is a powerful diagnostic state and new-onset DM is likely induced by the tumor. Under this viewpoint, the adenocarcinoma of our case may be closely related to the poor control of DM, especially because the patient did not develop glucagonoma syndrome. In short, we suggest that, in cases of type II DM occurring in middle-aged patients, the development of uncontrolled hyperglycemia should raise clinical suspicion of glucagonoma and/or pancreatic cancer. In this situation, further survey including pancreatic hormones and tumor marker profile is suggested.

In conclusion, combined pancreatic endocrine and exocrine tumors are rare. We have reported the first case of solitary concomitant pancreatic endocrine tumor and ductal adenocarcinoma. We suggest a classification system of tumor histogenesis for this group of tumors, including amphicrine, mixed, collision, solitary concomitant and multiple concomitant. Further investigation of more cases of this rare entity is still necessary.