AIM: To investigate the effects of blueberry on hepatic fibrosis and NF-E2-related factor 2 (Nrf2) transcription factor in rats.

CONCLUSION: Blueberry has preventive and protective effects on CCl4-induced hepatic fibrosis by reducing hepatocyte injury and lipid peroxidation. However, these effects may not be related to the activation of Nrf2 during long-term of CCl4.

Hepatic fibrosis is a common result of chronic injury to the liver[1]. Oxidative stress has recently been recognized as a fundamental factor in the pathological changes observed in various liver diseases[2,3]. Oxidative stress can cause excessive damage to hepatocytes through lipid peroxidation and protein alkylation[4,5]. NF-E2-related factor 2 (Nrf2) is an important transcription factor that regulates antioxidative stress reactions. NADPH quinone oxidoreductase 1 (Nqo1) and glutathione-S-transferase (GST) are the major phase-II detoxiﬁcation enzymes controlled by Nrf2[6,7].

Blueberries are flowering plants that belong to Vaccinium spp. of the family Ericaceae. The Human Nutrition Research Center (Mayer, USA) has performed a series of intensive studies of blueberries. These studies have indicated that blueberries contain anthocyanins, polyphenols and flavonoids, and appear to have the highest antioxidant capacity among the common fruits and vegetables[8,9]. Blueberries may also affect chronic disease through anti-inflammatory and antitumor mechanisms[10,11].

The focus of the present study was to examine the effect of blueberry on hepatic fibrosis and detoxification enzyme systems in rats.

MATERIALS AND METHODS
Ethical approval of the study protocol

All animal studies complied with the Animal Care and Use Guidelines of Guiyang Medical College (Guiyang, China).

Except in the control group, liver fibrosis was induced in each group by a complex method[12]. Rats in groups B-E received subcutaneous injections of 40% CCl4 solution (mixture of pure CCl4 and peanut oil) and 0.3 mL/100 g twice a week for 8 wk (the first dose was 40% CCl4 0.4 mL/100 g). Rats were fed a high-lipid/low-protein diet (79.5% corn farina, 20% fat, and 0.5% cholesterol) each day. Rats in group A were fed only a normal diet. At the same time, blueberry juice (1.5 g/100 g per day, po, “Rabbiteye Blueberry”; Blueberry production field of Ma-Jiang, Guizhou, China) was processed. Samples were stored at -20°C until use, and homogenized to prepare blueberry juice (1 mL blueberry juice contained about 2 g of dried blueberries). DSHX (1.0 g/kg per day, po; lot number 20081011; DSHX capsules composed of five Chinese herbal medicines, Tetrandrine, Radix Salviae Miltiorrhizae, Radix Paeoniae Rubra, Astragalus Membranaceus and Ginkgo leaf; Guiyang Pharmaceutical Company, Guizhou, China) and blueberry juice + DSHX (1.5 g/100 g + 1.0 g/kg, po, daily) were given to rats in groups C-E. After 8 wk, there were eight survivors in groups A, B, D and E, and nine in group C.

After fixation in 10% formalin for 24 h, samples were embedded in paraffin. Samples were then cut into 5-μm pieces and mounted on slides. They were stained with hematoxylin and eosin (HE) for histopathological examination, and with fibrosis-specific Masson stain for evaluation of the degree of liver fibrosis[13].

Calculation of the liver index

The liver index was calculated according to the formula[12]: (liver weight/rat weight) × 100%.

Measurement of levels of hyaluronic acid and alanine aminotransferase

Measurement of levels of superoxide dismutase, glutathione-S-transferase and malondialdehyde in liver homogenates

After de-paraffinization, rehydration, and antigen unmasking by heat treatment, histological sections were placed in 3% H2O2 for 10 min. They were then incubated with anti-Nrf2 (lot number K2008; Santa Cruz Biotechnology, Santa Cruz, CA, USA) and anti-Nqo1 (lot number B1508; Santa Cruz Biotechnology) antibody (1:100) overnight at 4°C. Samples were then processed using an EnVision kit (lot number 10N1775A; Dako, Denmark) according to the manufacturer’s protocols. PBS was used as the negative control. Yellow material in the cytolymph/nucleus was considered to be a positive cell. Five microscopic fields (× 400 magnification) were randomly chosen per slice, and the number of cells per field counted.

Protein in the total and cytoplasm were extracted using the Bradford method quantified using kits (lot numbers 090310 and 090401; Nanjing Kaiji Biological Engineering Research Institute, Beijing, China). Forty micrograms of total extract (Nrf2)/cytoplasm extract (Nqo1) were boiled in an equal volume of 2 × SDS electrophoresis sample buffer for 5 min before 12% SDS-PAGE. After electrophoresis, proteins were transferred to polyvinylidene fluoride membranes (lot number K7KN9080G; Millipore, Billerica, MA, USA). Membranes were blocked with 5% fat-free dry milk-TBST buffer for 1 h at room temperature, and then washed in TBST buffer. Membranes were incubated with a 1:1000 dilution of primary antibody of Nrf2 and Nqo1 overnight. On the second day, membranes were washed, followed by incubation with a 1:5000 dilution of horseradish peroxidase secondary antibody (lot numbers D2409 and G1009; Santa Cruz Biotechnology) for 1 h. Transferred proteins were visualized with an electrochemiluminescence detection kit (lot number 09065A2; Millipore) and short exposure of the membrane to X-ray films. β-actin (lot number 028K4826; Sigma-Aldrich, St. Louis, MO, USA) was used as an internal reference.

Effect of blueberry on levels of SOD, MDA and GST in liver homogenates

Effects of blueberry on the degree of hepatic fibrosis

After HE and Masson staining, hepatocytes in group A had a radial array with the central vein, and regenerating collagen fibers were absent. The lobular structure of group-B hepatocytes was destroyed, and the hepatic plates were disordered with diffuse, fatty degeneration. Collagen fibers expanded into the hepatic parenchyma, and fibrous septa surrounding and separating the normal lobules formed. Pseudolobules were observed in a few samples, and numerous inflammatory cells infiltrated in the portal area and fibrous septa. The degree of hepatic fibrosis in group B was significantly more compared with that in group A (P < 0.05).

The hepatic fibrosis in groups C-E was alleviated; the fibrous septa were thinner than those in group B (P < 0.05). Diffuse fatty degeneration in hepatocytes was found in some samples. Bridging fibrosis, a few inflammatory cells infiltrated into the portal area, fibrous septa, and pseudolobules were also found in some samples. More detailed information about the degree of hepatic fibrosis in each group is shown in Table 3 and Figure 1.

Figure 1 Liver tissue in each group of rats (HE staining, × 40 magnification). A: Light microscopy showing normal liver tissue in the control group; B: Marked ﬁbrosis in the model group; C-E: Pathological change in the treatment group was milder compared with that in the model group.
Effect of blueberry on gene and protein expression of Nrf2 and Nqo1 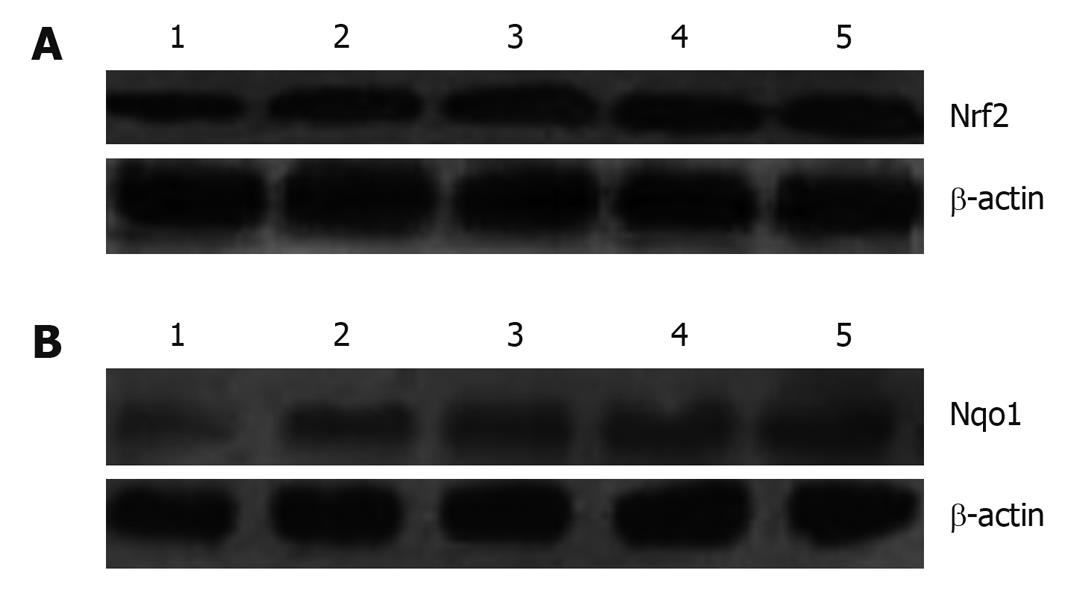 The present work demonstrated that blueberry has a therapeutic effect on CCl4-induced hepatic fibrosis in rats. There was no difference in therapeutic effect among the blueberry, DSHX, and blueberry + DSHX groups. DSHX is a mixed preparation composed of five traditional Chinese herbal medicines. We have previously reported that DSHX is effective in preventing hepatic fibrosis[12,14,15].

Reactive oxygen species and oxidative stress have an important role in the development of hepatic fibrosis. A central role in the defense against oxidative stress has been attributed to the transcription factor Nrf2, which belongs to the basic region-leucine zipper family. In health[16], Nrf2 localizes in the cytoplasm, where it interacts with the actin-binding protein Kelch-like ECH associating protein 1 (Keap1), and is rapidly degraded by the ubiquitin-proteasome pathway. Signals from reactive oxygen species or electrophilic insults target the Nrf2-Keap1 complex, which dissociates Nrf2 from Keap1. Stabilized Nrf2 then translocates to the nuclei, and promotes the expression of many antioxidant proteins and phase-II detoxifying enzymes such as Nqo1, GST and heme oxygenase-1 (HO-1)[17,18]. Activation of Nrf2 may be a novel strategy to prevent or ameliorate toxin-induced liver injury and fibrosis[17]. Curcumin has been shown to attenuate dimethylnitrosamine-induced liver injury in rats through Nrf2-mediated induction of HO-1[19]. Aleksunes et al[20] have proposed that Nrf2 is crucial for cytoprotection by coordinately activating detoxification genes and preventing the pathogenesis of liver disease.

Blueberry is a small round berry and has high cellular antioxidant activity. Increasing fruit consumption is a logical strategy to increase antioxidant intake and reduce oxidative stress[21]. Studies have suggested that fractions from blueberries may alter phase-II detoxiﬁcation enzymes in cell culture[22]. Boateng et al[23] and Reen et al[24] have reported significant increases in the activity of phase-II enzymes GST-α and NADPH quinine reductase in rats after supplementation with freeze-dried berries. Blueberry and probiotics exert protective effects on acute liver injury induced by d-galactosamine and lipopolysaccharide. They reduce the injury to hepatocytes (including inflammation and secretion of pro-inflammatory cytokines), improve barrier functions, and have antioxidant activity[25]. Proanthocyanidin isolated from blueberry leaves may be used against hepatitis C virus by inhibiting viral replication[26].

Our previous work has showed that blueberries can increase the level of mRNA expression of Nrf2, Nqo1, and HO-1 in rat liver if given orally for 21 d, and have good protective effects against acute hepatic injury in rats[27,28]. Blueberries can also increase expression of Nrf2 and HO-1 in primary hepatic stellate cells (data not shown). The present study tested the hypothesis that blueberries may have preventive protective effects on CCl4-induced hepatic fibrosis, and that these effects may be related to the activation of phase-II enzymes in rat livers.

We found that, in the prevention groups, liver weight and serum levels of HA and ALT were significantly reduced, and liver fibrosis was alleviated. The level of SOD in liver homogenates increased and MDA level decreased. These results indicated that blueberry had certain therapeutic effects on CCl4-induced hepatic fibrosis in rats through inhibition of liver inflammation and lipid peroxidation. There was no statistically significant difference in therapeutic effect among the blueberry, DSHX and blueberry +DSHX groups, which indicates that blueberry and DSHX did not act in synergy.

In summary, in the present study, blueberries possessed a therapeutic effect on CCl4-induced hepatic fibrosis in rats through inhibiting liver inflammation and lipid peroxidation, and may be not related to the induction of phase-II enzymes through the activation of Nrf2 in rat liver during long-term of CCl4. More detailed study is needed.

Conventional drugs used in the treatment of liver diseases inevitably have side effects. An increasing number of natural substances have been studied to explore if they have protective effects on the liver. Blueberries have unique effects on human retinal, brain and tumor cells, but reports about the effects of blueberries on liver diseases are lacking.

Reactive oxygen species and oxidative stress have an important role in the development of hepatic fibrosis. Blueberries have high cellular antioxidant activity. Recent reports have suggested that proanthocyanidin isolated from blueberry leaves can be used against hepatitis C virus by inhibiting viral replication.

The present study showed that blueberries have therapeutic effects on CCl4-induced hepatic fibrosis in rats, through inhibition of liver inflammation and lipid peroxidation. This protective effect may not be related to the activation of NF-E2-related factor 2 in rat livers.

Increasing consumption of blueberries is a reasonable strategy to increase antioxidant intake, and may lead to a reduced risk of hepatic disease.

The authors present some data from their research on the effectiveness of blueberries on liver fibrosis induced in laboratory animals. Readers of the journal may find it interesting to read the data.