Reduction of fasting blood glucose and hemoglobin A1c (HbA1c) is a well-established therapeutic strategy for prevention of complications in diabetic patients[25,26]. However, in patients with chronic liver diseases, fasting blood glucose and HbA1c are not always available for evaluation of glucose metabolism because of decreased hepatic glycogen content[27] and increased turnover of hemoglobin[28]. Furthermore, an association between the use of exogenous insulin or sulfonylurea agents and the development of HCC has recently been reported[29,30]. Although therapeutic guidelines for inhibiting the distinctive complications of HCV-associated insulin resistance are not yet available, amelioration of insulin resistance is considered to inhibit complications and improve prognosis. Here, we summarize treatments that could reduce HCV-associated insulin resistance. 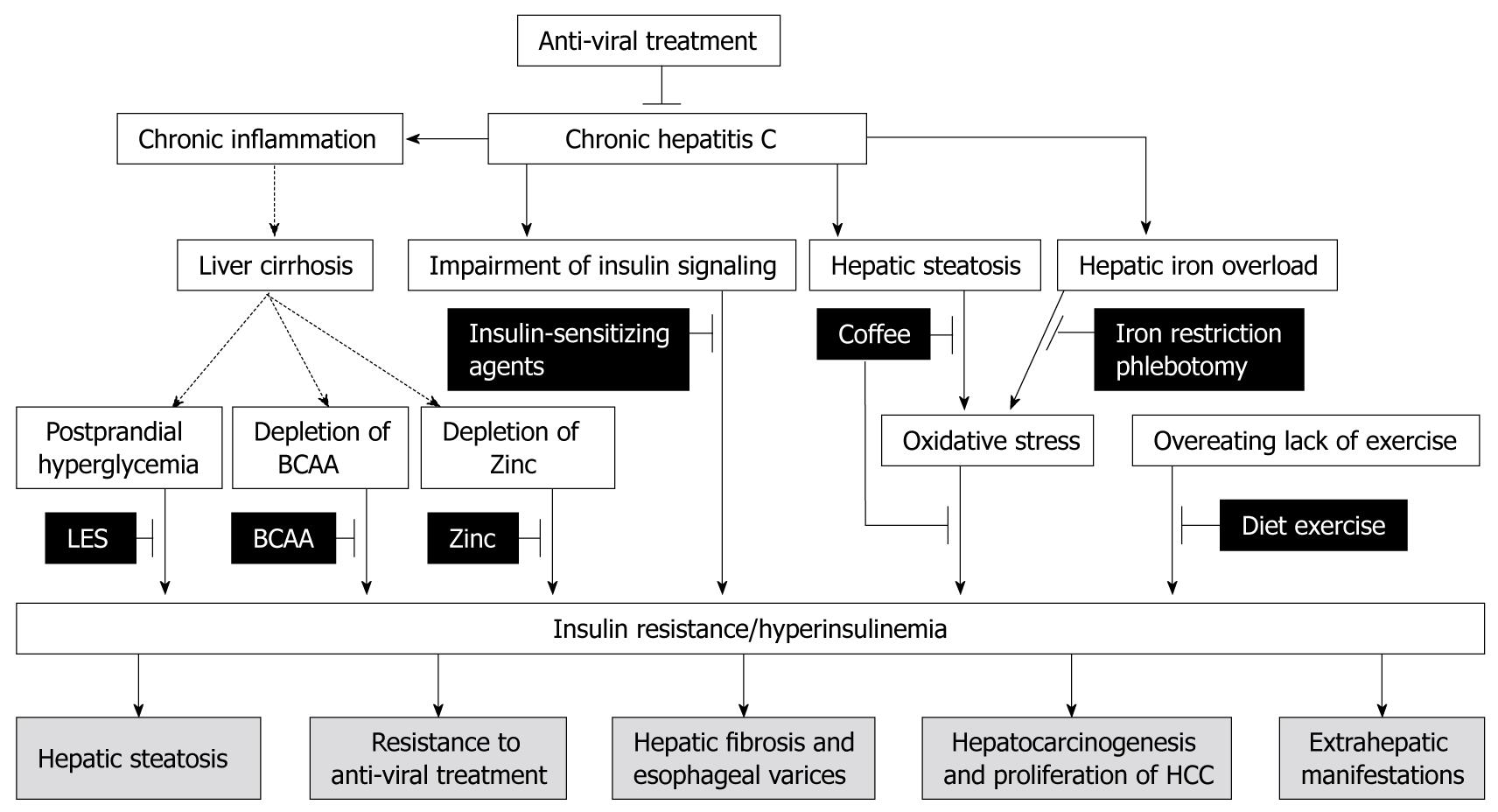 Alternatively, HCV core protein is reported to upregulate suppressor of cytokine signaling (SOCS) 3[6,49-52], which acts as an adaptor to facilitate the ubiquitination of signaling proteins, leading to subsequent proteasomal degradation of SOCS3[19]. HCV core protein-induced SOCS3 upregulation promotes proteasomal degradation of insulin receptor substrate (IRS) 1 and IRS2, resulting in the development of insulin resistance in patients with HCV infection[6,19,44]. Simultaneously, SOCS3 is also known to inhibit interferon-alpha-induced expression of the anti-viral proteins 2',5'-oligoadenylate synthetase and myxovirus resistance A through inactivation of Janus kinase, a signal transducer and activator of the transcription pathway[49]. Thus, SOCS3 seems to be a key molecule for a cross-talk between insulin resistance and resistance in patients with HCV infection. In fact, hepatic expression of SOCS3 has predictive value for the outcome of anti-viral therapy in patients with HCV infection[53,54].

Hepatocarcinogenesis and proliferation of HCC

Liver cirrhosis, aging, and being a male are well-known risk factors for the development of HCC in patients with HCV infection[18,63]. In addition, insulin resistance is now recognized as an independent risk factor for the development of HCC worldwide[18,63]. Diabetes is reported as the only independent risk factor for HCC in patients with chronic hepatitis C[21]. Moreover, development of diabetes-related HCC is reported to be independent of viral hepatitis and alcoholism[64]. These findings suggest that insulin resistance has direct effects on hepatocarcinogenesis. Although precise mechanisms for this effect remain unclear, the following explanations may be put forward. Insulin resistance causes lipid accumulation[19]. Visceral adiposity results in changes in serum adipocytokine levels, including reduction of adiponectin, which suppresses effects for hepatocarcinogenesis[65]. Hepatic lipid accumulation also increases oxidative stress, which may be responsible for the development of HCC[18,63]. Besides these possibilities, insulin has a mitogenic effect[19,30], suggesting that insulin may be directly linked to hepatocarcinogenesis[19].

Coffee consumption reduces the risk of elevated serum alanine aminotransferase activity[86], hepatic fibrosis[87], and disease progression in chronic hepatitis C[88]. Coffee consumption also reduces the risk of HCC independent of HCC etiology[89]. Caffeine is metabolized by hepatic cytochrome P450 1A2 into 3 metabolites, the dimethylxanthines paraxanthine, theobromine, and theophylline. Of these metabolites, theophylline inhibits transforming growth factor-β-stimulated CTGF expression through PPARγ and Smad 2/3-dependent pathways. Since CTGF and transforming growth factor-β are important factors associated with progression of hepatic fibrosis and hepatocarcinogenesis, a metabolite of caffeine, theophylline, may have an inhibitory effect on the development of complications associated with HCV infection. In addition, coffee has significant effects on glucose metabolism[90]. In an animal experiment, the insulin-sensitizing effects of coffee have been demonstrated[91]. Similarly, in a human study, coffee consumption reduced fasting glucose and insulin levels[90,92]. Although the mechanisms for the coffee-induced insulin-sensitizing effect remain unclear, some possibilities exist. Chlorogenic acids, a constituent of coffee, inhibits hepatic glucose-6-phosphate translocation[90,93], limits glucose absorption from the gut by inhibiting Na+-dependent transport[94], and increases the secretion of glucose regulating hormone, glucagon-like peptide (GLP)-1, from the gut[90,95,96]. These findings suggest that a constituent of coffee, chlorogenic acid, directly ameliorates HCV-associated insulin resistance. Furthermore, coffee modulates lipid metabolism[97,98] and lowers body weight[90], indicating that coffee may suppress the lipid-induced increase in oxidative stress and ameliorates HCV-associated insulin resistance.

Hepatic iron overload produces oxidative stress and is a factor responsible for the development of HCV-associated insulin resistance[4,99-101]. Although the pathogenesis of hepatic iron overload remains unclear, recent studies showed that iron-regulating molecules are modulated by HCV infection. Hepcidin is a negative regulator of duodenal iron absorption and macrophage iron release[100] and decreased hepatic expression of hepcidin is seen in both HCV polyprotein transgenic mice[102] and patients with HCV infection[103-105]. In addition, upregulation of hepatic expression of transferrin receptor 2, a mediator of iron uptake, is responsible for hepatic iron overload[106].

Zinc plays a crucial role in the metabolism of protein, carbohydrate, lipid, nucleic acid, and ammonia[111-113]. In fact, zinc supplementation improves glucose disposal in patients with cirrhosis[114]. Zinc also inhibits hepatic inflammation[115] and hepatic fibrosis[116]. More recently, zinc supplementation was shown to lower the cumulative incidence of HCC in patients with HCV infection[117]. It is unclear whether these inhibitory effects of zinc on progression of liver disease are mediated by amelioration of insulin resistance. However, zinc participates in the synthesis, storage and secretion of insulin[118] and regulates the binding ability of insulin to bind to its receptor[113]. As the serum zinc level is decreased in patients with HCV infection[115,117], supplementation of zinc could be a therapeutic option.

Exogenous insulin and sulfonylurea agents: Anti-diabetic agents are effective for decreasing plasma glucose and HbA1c levels, leading to prevention of diabetes mellitus-associated complications including cardiovascular diseases[119,120]. However, it has never been determined whether anti-diabetic agents prevent complications or improve prognosis in patients with HCV infection. Use of exogenous insulin or sulfonylurea agents may worsen hyperinsulinemia. In fact, we, along with others, recently reported an association between exogenous insulin or sulphonylurea treatment and the development of HCC in patients with HCV infection[29,30,121]. Use of exogenous insulin is also reported to be associated with the development of colon cancer[122] and other malignancies[123]. Although a causal relationship between exogenous insulin and the development of HCC remains controversial[124], the reduction of serum insulin levels is a first line therapeutic strategy for insulin resistance[125-128].

BCAA are constituents of proteins and are required for protein synthesis[19,78,137,138]. In addition, BCAA are reported to modulate glucose metabolism. Leucine and isoleucine induce glucose transporter 1 and 4 translocation to the plasma membrane of muscle cells and improve glucose metabolism in a carbon tetrachloride-induced cirrhotic rat model[139]. In addition, leucine enhances the insulin-induced activation of the Akt/mammalian target of the rapamycin pathway in adipocytes of db/db mice[140]. Moreover, isoleucine increases hepatic phosphatidylinositol 3-kinase activity and improves insulin resistance in Zucker fa/fa rats, a model of severe insulin resistance[141]. Recently, knockout of the mitochondrial BCAA aminotransferase gene in mice, in which results in elevated plasma BCAA levels, was found to ameliorate insulin resistance[142]. Thus, BCAA improve insulin signaling in various animal models via several pathways. In good agreement with these results in animals, in human studies, we have recently shown that BCAA-enriched supplementation reduces insulin resistance in patients with HCV infection[143,144]. In a multicenter, randomized, controlled trial, BCAA supplementation led to a reduction in the risk of HCC in cirrhotic patients[145]. This suppressive effect on hepatocarcinogenesis was more evident in obese patients with HCV infection[145]. Both obesity and HCV induce the development of insulin resistance. Thus, BCAA may improve insulin resistance and subsequently inhibit insulin resistance-induced hepatocarcinogenesis[19,145].