Pancreatic endocrine tumors are rare but are among the most common neuroendocrine neoplasms of the abdomen. At diagnosis many of them are already advanced and difficult to treat. We report on an initially inoperable malignant pancreatic endocrine tumor in a 33-year-old woman, who received neoadjuvant peptide receptor radionuclide therapy (PRRT) as first-line treatment. This resulted in a significant downstaging of the tumor and allowed its subsequent complete surgical removal. Follow-up for eighteen months revealed a complete remission. This is the first report on neoadjuvant PRRT in a neuroendocrine neoplasm with subsequent successful complete resection.

Although pancreatic endocrine tumors (pNETs) are rare, they are among the most common neuroendocrine neoplasms of the abdomen[1]. PNETs account for less than 5% of all primary pancreatic malignancies. They are separated into functional (insulinomas, gastrinomas, glucagonomas, somatostatinomas) and non-functional pNETs. Non-functioning pNETs are pancreatic tumors with endocrine differentiation that lack a clinical syndrome of hormone hypersecretion. Up to 60% of non-functioning endocrine pancreatic tumors are already metastasized at diagnosis. In the advanced stage the pNETs still remains a interdisciplinary challenge. Pancreatic neuroendocrine tumors treatment by chemotherapy and radiation therapy has not demonstrated significant antitumoral effects. Because well differentiated neuroendocrine neoplasms usually express somatostatin receptors, they can be targeted with peptide receptor radionuclide therapy (PRRT) with palliative intention[2,3]. Several studies showed promising results in patients with advanced neuroendocrine tumors, with a partial response or disease stabilisation in palliative treatment[3,4]. But surgery still remains the gold standard in the management of pNETs[5]. Aggressive surgical resection can be performed safely and may improve both symptomatic disease and overall survival[6]. Prognostic indices such as tumor differentiation and the ability to achieve R0 resection have been linked to survival outcome. Here we describe the treatment of an initially inoperable pNET with peptide receptor radionuclides and show that this neoadjuvant treatment resulted in downstaging of the tumor and curative surgery.

A 33-year-old woman was admitted to an external hospital because of recurrent abdominal pain, flush attacks and diarrhea. CT revealed enlarged paraaortic lymph nodes, but no primary tumor. On exploratory laparotomy a tumor in the head of the pancreas was found and was thought to be a pancreatic ductal adenocarcinoma. This tumor was deemed inoperable because of the involvement of the mesenteric vessels and the paraaortic lymph nodes. Therefore only a lymph node biopsy was obtained. Histological investigation of the biopsy specimen revealed a lymph node metastasis (peripancreatic) of a highly differentiated neuroendocrine carcinoma that stained positive for chromogranin A and synaptophysin (Figure 1A and B). There was no expression of insulin, glucagon, somatostatin, or pancreatic polypeptide. The somatostatin receptor SSTR2 showed distinct membranous expression (Figure 1C). The tumor cells were only supported by small stromal tissue bands. A [68Ga]DOTA-1-Nal3-octreotide (NOC) PET/CT was performed to evaluate the somatostatin receptor status. Chromogranin A and serotonin serum levels were normal at all times. Finally, the patient was diagnosed as having a highly differentiated neuroendocrine pancreatic carcinoma, stage IV. Biotherapy with a somatostatin analogue failed. The patient still complained about flushes and diarrhea. 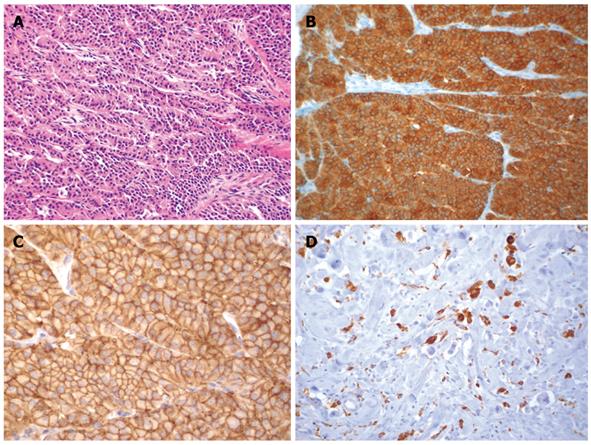 Figure 1 Histological images. A: Lymph node metastasis of a high differentiated neuroendocrine carcinoma of the pancreas showing a trabecular pattern (HE, × 120); B The cells are positive for synaptophysin (× 120); C: High membranous expression of somatostatin-receptor SSTR-2 (× 120); D: Macrophages (CD68-positive) as a sign for tumor necrosis after PRRT (× 120).

As the patient resolutely refused any chemotherapy, but was willing to undergo radioreceptor therapy, two cycles of PRRT were administered intravenously. The first cycle, administering 6000 MBq (162.1 mCi) [90Y]DOTA-TATE (DOTA-[Tyr3] octreotate) was given in February 2007 and the second one, injecting 4500 MBq (121.6 mCi), in June 2007. To prevent nephrotoxicity, an amino acid infusion based on the protocol of Jamar et al[7] was used. Kidney function was measured by 99mTc-DTPA using the single sample plasma clearance method for GFR calculation. 99mTc-MAG3 was used for dynamic renal scintigraphy and for determination of the tubular extraction rate (TER). The blood profile and routine laboratory parameters (electrolytes, liver function tests, creatinine, BUN etc.) were checked prior to therapy and then every month.

Mild grade 1 anemia and erythrocytopenia were noted as the only side effects. There was no other hematotoxicity or nephrotoxicity.

After 2 cycles the abdominal lymph node metastases had regressed significantly and PET/CT using [68Ga]DOTA-NOC and 18F-FDG ([18F]fluor-2-deoxy-glucose) performed in October 2007 indicated that the patient was operable. After every PRRT cycle a partial remission (EORTC criteria 1999) was detected (Figure 2B and C). 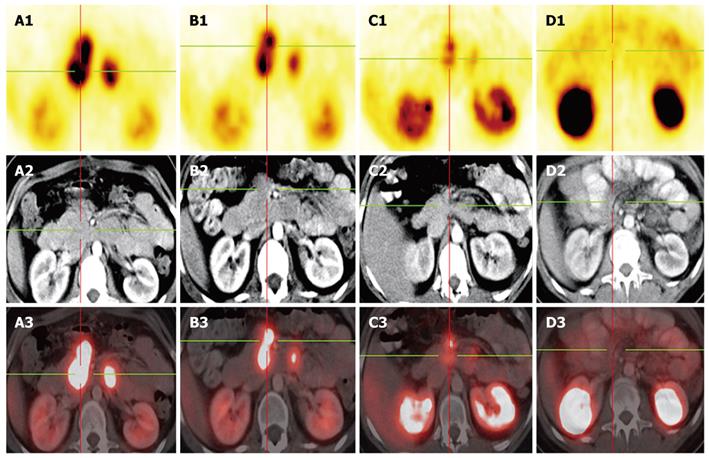 Figure 2 Gallium-68 DOTA-NOC PET-CT in the follow up. A: Octreotide scan prior to PRRT-1, Gallium-68 DOTA NOC PET-CT and prior operation, showing multiple paraaortal lymph nodes next to the pancreas head; B: 3 mo after PRRT-1; C: 5 mo after PRRT-2 showing consistently decreasing mesenterial lymph nodes metastases with a decreasing SUV; D: Octreotide scan as follow up 18 mo after operation-complete remission.

In November 2007, a pylorus-preserving pancreatoduodenectomy (Traverso-Longmire) was performed with en bloc resection of parts of the jejunum and its mesenterium and lymph nodes (Figure 3). The operation specimen revealed a tumor in the head of the pancreas that was more than 2 cm in diameter and had metastasized to one mesenteric lymph node. Histologically, the endocrine tumor formed a trabecular pattern. The cell structures were embedded in well developed hyaline connective tissue, some parts of which were myxomatous. In the myxomatous area there were aggregates of CD68 positive macrophages that were occasionally positive for iron (Figure 1D). The tumor tissue infiltrated the surrounding pancreatic and interstitial tissue and also showed perineural infiltration. Immunohistologically, about 5%-10% of the tumor cells expressed glucagon or somatostatin and were negative for insulin, serotonin and pancreatic polypeptide. The somatostatin receptor SSTR2 showed a distinct membranous staining pattern in all tumor cells. The lymph node was filled with tumor tissue. The final stage was ypT2 pN1 pM1(LYM) G3 R0 L0 V0[8]. The patient left the hospital 19 d after the operation. Six, twelve and eighteen months later a [68Ga]DOTA NOC PET/CT revealed a complete remission (Figure 2D).

Advanced malignant pNETs are difficult to treat[9,10] and there are only a few studies on the resection of pNETs with extensive local spread. It seems, however, that patients with advanced malignant pNETs benefit from resection, because postoperative actuarial 5-year survival rates of up to 80% have been reported after extended tumor resection, even with synchronous metastasis[11,12]. Nonetheless, the presence of liver or distant metastases is the prognostic factor determining survival[13]. In our patient, the diagnosis of a malignant well differentiated pNET was made on a biopsy specimen obtained during an explorative laparotomy. Tumor tissue showed a high expression of the somatostatin receptor SSTR2. Since the patient refused any chemotherapy, treatment with PRRT was performed. In the course of therapy an excellent downstaging of the initially inoperable tumor was reached. The oncology concept was changed from palliative to curative intent considering operability. PRRT is usually used as a palliative treatment[14]. Currently, there are no reports that deal with the use of radionuclide therapy as a neoadjuvant strategy in oncological surgery. Our case indicates that this therapy may be useful for downstaging and downsizing well differentiated neuroendocrine tumors, thereby achieving a higher operability rate. We recommend first performing [68Ga]DOTA-NOC PET/CT to evaluate the somatostatin receptor status[15,16]. If there is high SSTR expression PRRT will be effective[17]. In addition, staging of the patient after every cycle is required in order to evaluate the response and the operability. The tumor should be downsized to an extent in which a R0-resection should be feasible. In case of a relapse, which is not unlikely[11], another course of PRRT is again a therapeutic option.

In conclusion, based on the encouraging results obtained in this case we believe that neoadjuvant PRRT is a novel approach in the treatment of surgically unresectable pNETs in patients with positive somatostatin receptor status.