CONCLUSION: Cone-beam CT is a useful and convenient tool for assessing the iodized oil uptake of small hepatic tumors (< 3 cm) directly after TACE.

Transarterial chemoembolization (TACE) is a regional therapeutic modality that has become an accepted treatment for unresectable hepatocellular carcinoma (HCC). Triphasic multi-detector computed tomography (MDCT) is commonly used for the detection and preprocedural localization of hypervascular HCCs greater than 1 cm in diameter[1-3].

Diagnostic angiography using digital subtraction angiography (DSA) is performed before TACE in order to detect hypervascular HCCs. Occasionally, the small neoplastic foci are uncertain, and difficult to detect. Some studies have reported that the detection rate of small HCCs, less than 3 cm, in DSA was about 70%[4,5], and other studies showed higher sensitivity in nodule detection in helical biphasic CT than in DSA[6]. This discrepancy can make it difficult to determine whether or not the same nodules exist on MDCT in cases of small tumor nodules.

Iodized oil retention pattern after TACE is a posttreatment prognostic marker and significant factors affect local recurrence[7-9], however, a method for evaluating this immediately after TACE, is to take a spot image Follow-up unenhanced CT is usually performed within 1 mo after TACE, but it is sometimes difficult to determine whether there is washout of iodized oil uptake or initial failure of iodized oil uptake when there is partial iodized oil uptake in a lesion on the first follow-up CT. The exact method for comparing iodized oil retention in hypervascular nodules on preprocedural MDCT is to check the postprocedural CT directly after TACE and for this the patient must be transported from the angiography suite to the nearest CT scanner.

Cone-beam CT is a new technology provided by the combined angiography/CT suite that uses flat-panel detector (FD) technology. It provides images similar to those of CT and is able to obtain 3D reconstructions such as multiplanar reformat (MPR), maximum intensity projection (MIP), and 3D volume rendering (VR) with these data sets.

The purpose of this study was to evaluate the clinical value of cone-beam CT in the assessment of iodized oil uptake in TACE for small HCCs.

From March 2006 to June 2006, eighteen patients (sixteen males and two females; 41-76 years; mean age, 58 years) with small HCCs (26 nodules; mean diameter 11.9 mm; range, 5-28 mm), underwent cone-beam CT and TACE consecutively. All patients had underlying liver cirrhosis. The diagnosis of HCC was made clinically in these patients by using typical imaging findings on MDCT and an elevated level of serum alpha fetoprotein. The size and location of the tumors were evaluated with triphasic MDCT before TACE (Figures 1 and 2). Eleven patients had previously undergone TACE for multiple nodules. The first TACE was performed in seven patients who were not candidates for surgery. According to our institutional guidelines, institutional review board approval was not required for this report. 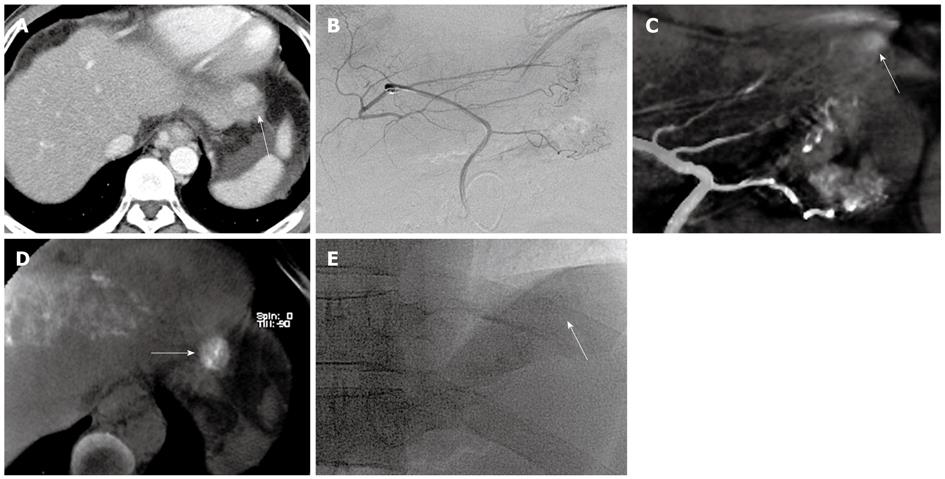 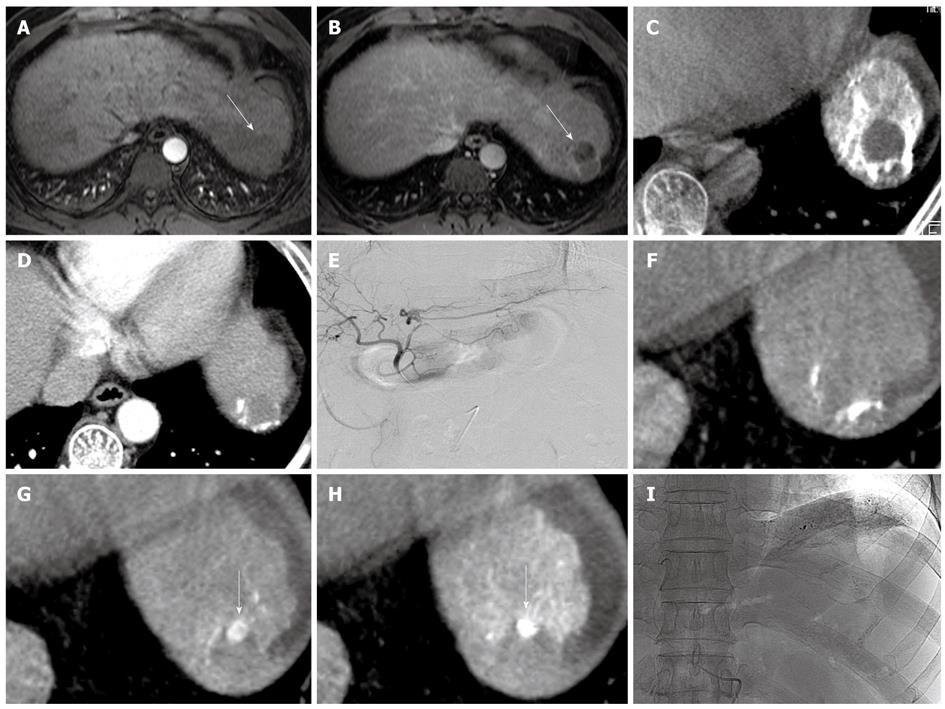 Figure 2 A 52-year-old man with HCC in S2 for 2nd TACE. A, B: Early arterial phase (A) and delayed phase (B) of MRI reveals nodule (arrow) in segment 2 with no enhancement (arrow); C: Cone-beam CT after TACE shows poor grade of iodized oil uptake by the tumor; D: Early arterial phase of MDCT shows washout of iodized oil uptake near nodule, but no enhancing portion within the nodule 3 mo later; E: Left hepatic angiogram during TACE reveals no tumor and feeding artery 1 mo later; F, G: Cone-beam CT with (F) and without (G) hepatic arteriography shows small enhancing nodule (arrow) in the nodule; H, I: Cone-beam CT after infusion of emulsion (H) shows excellent grade iodized oil uptake by the nodule (arrow). This case shows typical “nodule-in-nodule” appearance of HCC, but spot image (I) did not distinguish nodular uptake.
TACE

Angiography was conducted using the AXIOM Artis FD Biplane Angio suite with cone-beam CT (DynaCT, Siemens Medical Solutions, Erlangen, Germany). For angiography, a 5-Fr catheter was inserted using the Seldinger technique from the right common femoral artery into the celiac trunk. After confirming the location of the tumor and its feeding artery, a 3-Fr 100-cm-long microcatheter (Progreat; Terumo, Tokyo, Japan) with a 0.016-inch, 150-cm long guidewire covered by hydrophilic polymer (Radiofocus; Terumo, Tokyo, Japan), was advanced through a 5-Fr catheter into the peripheral portion of the feeding artery as close to the lesion as possible (Figures 1 and 2). If tumor staining or feeders were uncertain, cone-beam CT hepatic arteriography (cone-beam CTHA) was performed (contrast media injection rate was 2 mL/s; X-ray delay used in 1.5 s). After these baseline studies, TACE using an emulsion of epirubicin hydrochloride (Pharmorubicin; Ildong, Seoul, Korea) dissolved in meglumine ioxitalamate (Telebrix; Guerbet, Aulnay-sous-Bois, France) mixed with iodized oil (Lipiodol Ultra Fluid; Guerbet, Aulnay-sous-Bois, France) was performed. The end point of TACE was when an “oily portogram” was achieved. Finally, spot image and cone-beam CT were performed to determine the deposition of iodized oil.

The iodized oil uptake in 4 nodules was not seen in spot image, two nodules were less than 1 cm, one was between 1 cm and 2 cm, and one was over 2 cm. The discordance between the two modalities occurred in nodules less than 2 cm (Table 2).

Three nodules showed atypical enhancement patterns in MDCT, and additional dynamic magnetic resonance imaging (MRI) was performed for one nodule (Figure 2). Their feeders were uncertain on selective right or left hepatic arteriography, but were detected with cone-beam CTHA. Enhancement patterns and iodized oil uptake in the nodules are shown in Table 3.

Several treatment options for small HCCs have been introduced for patients who are not surgical candidates. These options include TACE, percutaneous ethanol injection (PEI), radiofrequency ablation (RFA), microwave coagulation therapy (MCT), laser thermal ablation (LTA), and combination therapy[10,11]. Among them, TACE is widely performed, because it is minimally invasive, repeatable, and more effective in combination with other treatments[10-15].

Cone-beam CT was first used in neuroendovascular procedures, and the image quality is sufficient to make a diagnosis when a complication is suspected[18]. In the era of assessing the degree of iodized oil uptake, cone-beam CT is also a convenient tool during and after TACE and clearly correlates with MDCT. If cone-beam CT images shows non-compact iodized oil uptake, immediate reintervention can be achieved. The disadvantages of this CT-like image are low temporal resolution and a small field of view, however, it is sufficient to locate lesions previously diagnosed on MDCT[19].

Takayasu et al[9] reported “targeted transarterial oily chemoembolization” which is a similar method to ours, but these authors used a unified helical CT and angiography system. Our system is only a DSA machine without a helical CT system and has more simple structures.

Cone-beam CTHA placing the microcatheter in the nearest arteries was performed in only three nodules in this study. Another study[20] also reported this method, and this technique is very useful to confirm a perfusion area in the artery. Although a small number of cases were included in this study, this method is a very useful and time-saving technique in TACE and other interventional procedures, especially for small lesions.

In conclusion, cone-beam CT is a useful and convenient tool for assessing the iodized oil uptake by small hepatic tumors (< 3 cm) directly after TACE. In addition, in cases with suspected small HCC nodules without typical enhancement patterns on CT, cone-beam CTHA will be very useful, however, further study is required.

Iodized oil retention pattern after transarterial chemoembolization (TACE) is a posttreatment prognostic marker, and significant factors affect local recurrence, however, a method for evaluating this immediately after TACE is to take a spot image Follow-up unenhanced computed tomography (CT) is usually performed within 1 mo after TACE, but it is sometimes difficult to determine whether there is washout of iodized oil uptake or initial failure of iodized oil uptake when there is partial iodized oil uptake in a lesion on the first follow-up CT.

In the present study, the authors investigated the efficacy of cone-beam CT with regard to iodized oil uptake after TACE for small hepatocellular carcinoma (HCC)s.

The study showed that cone-beam CT is a useful and convenient tool for assessing the iodized oil uptake by small hepatic tumors directly after TACE.

Cone-beam CT is a new technology provided by the combined angiography/CT suite that uses flat-panel detector technology. It provides images similar to those of CT and is able to make 3D reconstructions such as multiplanar reformat, maximum intensity projection, and 3D volume rendering with these data sets.

This is an interesting study which shows the advantages of assessing iodized oil uptake after TACE for small HCC with cone-beam CT. It may provide useful information for us.