In Pakistan more than 10 million people are living with Hepatitis C virus (HCV), with high morbidity and mortality. This article reviews the prevalence, genotypes and factors associated with HCV infection in the Pakistani population. A literature search was performed by using the keywords; HCV prevalence, genotypes and risk factors in a Pakistani population, in Pubmed, PakMediNet and Google scholar. Ninety-one different studies dating from 1994 to May 2009 were included in this study, and weighted mean and standard error of each population group was calculated. Percentage prevalence of HCV was 4.95% ± 0.53% in the general adult population, 1.72% ± 0.24% in the pediatric population and 3.64% ± 0.31% in a young population applying for recruitment, whereas a very high 57% ± 17.7% prevalence was observed in injecting drug users and 48.67% ± 1.75% in a multi-transfused population. Most prevalent genotype of HCV was 3a. HCV prevalence was moderate in the general population but very high in injecting drug users and multi-transfused populations. This data suggests that the major contributing factors towards increased HCV prevalence include unchecked blood transfusions and reuse of injection syringes. Awareness programs are required to decrease the future burden of HCV in the Pakistani population.

Hepatitis C virus (HCV) was discovered in 1989 as the major causative agent of non-A, non-B hepatitis[1]. It belongs to the Flaviviridae family and is a plus-stranded RNA virus[2]. About 200 million people are infected with HCV worldwide, which covers about 3.3% of the world’s population[3,4]. HCV infection leads to chronic hepatitis in 50% to 80% of individuals[5]. It was estimated by the WHO in 2004 that the annual deaths due to liver cancer caused by HCV and cirrhosis were 308 000 and 785 000 respectively[6].

Pakistan is a developing country of 170 million people with low health and educational standards. According to the human development index of the United Nations, it was ranked 134th out 174 countries[7]. In Pakistan 10 million people are presumed to be infected with HCV[8]. Public health authorities are creating awareness about hepatitis through print and electronic media[9], but still tremendous efforts are required to increase the awareness regarding various risk factors involved in HCV transmission. In developing countries, due to non-implementation of international standards regarding blood transfusion, reuse of needles for ear and nose piercing, reuse of syringes, injecting drug users, tattooing, shaving from barbers, unsterilized dental and surgical instruments are the main source of transmission of HCV. This article briefly presents the prevalence, genotypes and risk factors associated with HCV transmission in the Pakistani population.

Table 1 includes various reports showing the percentage prevalence of HCV in different groups. Weighted mean of each population was calculated by using the formula:

Standard error of mean was calculated by using the formula:

Results of each population group are presented in the form of mean ± SE with 95% confidence interval.

It was estimated that there were about 5 million drug users in Pakistan, out of which 15% were regular IDUs[48]. There has been an increased shift among addicts from inhalatory to injectable drugs due to decrease in quality and availability of heroin (common inhalatory drug used in Afghanistan and Pakistan)[49]. The effect of injecting drugs is more intense and satisfying, and young drug users who switch over to injectables usually adopt it as the main route of their drug administration[50]. Approximately 50% of IDUs reported by Altaf et al[51] in 2007 were in a treatment program; the majority of them wanted to get rid of their addiction but could not do so due to non availability or high charges by rehabilitation centers. The main reason for relapse was the economic crisis which most addicts suffer because the rehabilitation centers are not involved in the development of vocational skills among addicts. Four different reports showed a high 57% ± 17.7% prevalence of HCV among the IDUs[52-55].

Thalassemic and hemophilic patients require life-long blood transfusions, so it is necessary to obtain screened blood from a reputable source, because the multi-transfused population is more prone to blood-borne pathogens. Arif et al[56] reported that only 15.8% of parents of thalassemic children knew the importance of blood screening. Six different reports showed an HCV percent prevalence of 48.67% ± 1.75% among the thalassemic and hemophilic population[56-62].

It has been reported from the US that up to 20% of new HCV infections are due to sexual activity[66]. Two different reports from the USA and Congo indicate low HCV prevalence among commercial sex workers[67,68]. The main problems in Pakistan are illiteracy, lack of awareness about sexually transmitted diseases and low use of condoms among the sex workers. Saleem et al[69] reported in 2005 that 17% of female sex workers, 3% of male sex workers and 4% of hijras (transgender men) consistently used condoms during the previous month; 67% of female sex workers were illiterate, 34% of female sex workers were suffering from sexually transmitted infections. Homosexual activities were very high among street children who are sexually victimized or indulge in such activities; later on they adopt commercial sex in order to raise their income. Condom usage among the male homosexual population was very low. Four different studies showed an interspousal percent prevalence of 17.24% ± 7.98%[70-73].

The reuse of syringes and needles was a major factor contributing towards increased HCV prevalence[74,75]. It was reported that there are several small groups involved in recycling and repacking of used unsterilized syringes, which were available in various drug stores. It was difficult for the public to differentiate between new sterilized syringes and recycled unsterilized syringes[76]. Janjua et al[77] reported that 68% of individuals received injections during the previous three months in Digri and Mirpur khas, two districts of Pakistan, out of which only 54% were from freshly opened syringes. The incidence of sharing of injection equipment for the last injection was 8.5% in Hyderabad and 33.6% in Sukkur[54].

In Pakistan, the number of estimated injections per person per year ranged from 8.2 to 13.6, which was the highest among developing countries, out of which 94.2% were unnecessary[51]. Household members who received four injections per year were 11.4% more prone to HCV infection than who did not receive injection[78]. Khan et al[74] reported that if both oral and injectable medicine were equally effective, 44% of the Pakistani population preferred injectable medicine.

In 2000, the WHO recommended that countries should implement strategies to change the behavior of health care workers and patients in order to decrease the over-use of injections, to ensure the practice of sterile syringes and needles, and to properly destroy sharp waste after use[79]. It was reported that 59% of syringes were dumped into the general waste and not properly disposed of in the healthcare waste. Scavengers seeking valuable things from the waste are at high risk of receiving needle stick injuries from contaminated needles[76].

People in developing countries are mostly anemic, and are more prone to traumatic injuries and obstetric complications. Blood transfusion in these situations is life-saving. If blood is not properly stored or is carrying blood-borne pathogens, then the situation becomes more complicated. According to the WHO office in Pakistan about 1.2 to 1.5 million transfusions are carried out annually in Pakistan[80]. In 2000, Luby et al[81] reported that 50% of blood banks in Karachi recruited paid donors, 25% of donations were from volunteer donors and only 23% of the blood banks screened for HCV while 29% of them were storing blood outside the WHO recommended temperature.

In developing countries, blood transfusion is still a problem due to lack of organized infrastructure, continuous supply of electricity, and properly trained and educated staff. In Pakistan the main source of blood donations are replacement donors and the majority of these are friends and relatives of the patient. These donors donate blood due to fear of death of a relative, chance of further complication of disease or under family pressure. These donors mostly hide their health conditions from their relatives. Selection of donor and their proper screening are key factors to ensure safe transfusion. Safe blood donors are those whose donations are repeatedly negative on screening[17]. Sixty-six percent of Pakistanis are residents of rural areas where there is less access to blood transfusion services. To provide proper transfusion facilities to underdeveloped areas requires economic growth. Efforts are required to eliminate the transfusions from paid donors, to improve the safety of the blood supply[81]. These conditions can be overcome by development of a fair and organized system of blood screening and transfusion.

In third world countries like Pakistan, most of the barbers are illiterate and unaware of transmission of infectious agents through the repeated use of razors and scissors for different customers without sterilizing them first[82]. Janjua and Nizamy reported that only 13% of the barber community knew that hepatitis is a liver disease and that it could be transmitted by contaminated razors; 11.4% of them were cleaning razors with antiseptic solution while 46% of them were re-using razors[83]. Recent reports suggested that only 42% knew about hepatitis, 90% did not wash hands, 80% were not changing aprons and 66% were not changing towels after each customer. Circumcision is a very important religious procedure performed during early infancy both in rural and urban areas, and the barber community performing this procedure are mostly unaware of transmission of hepatitis by contaminated instruments[84]. Bari et al[85] identified the risk factors involved in transmission of HCV and reported that 70% and 48% of HCV patients had histories of facial and armpit shaving from barbers respectively.

In the Pakistani population there was moderate knowledge about HCV infection whereas awareness about various HCV risk factors was very low[31,86,87]. In a survey conducted at a family medicine clinic in Karachi, most of the participants had some educational background and were living in Karachi city. It was reported that 61% of participants believed that HCV was a viral disease, 49% believed that it could be transferred by needles and injections, 5.3% believed that it could be transmitted by ear and nose piercing, and 20.6% knew that it can cause cancer[86]. Kuo et al[52] reported in 2006 that HCV awareness was only 19% in the IDU population of Lahore and Quetta. Zuberi et al[88] reported that knowledge about HCV infection was related to the educational background of the participants. Public awareness programs are required to decrease the future burden of HCV infection in the Pakistani population. 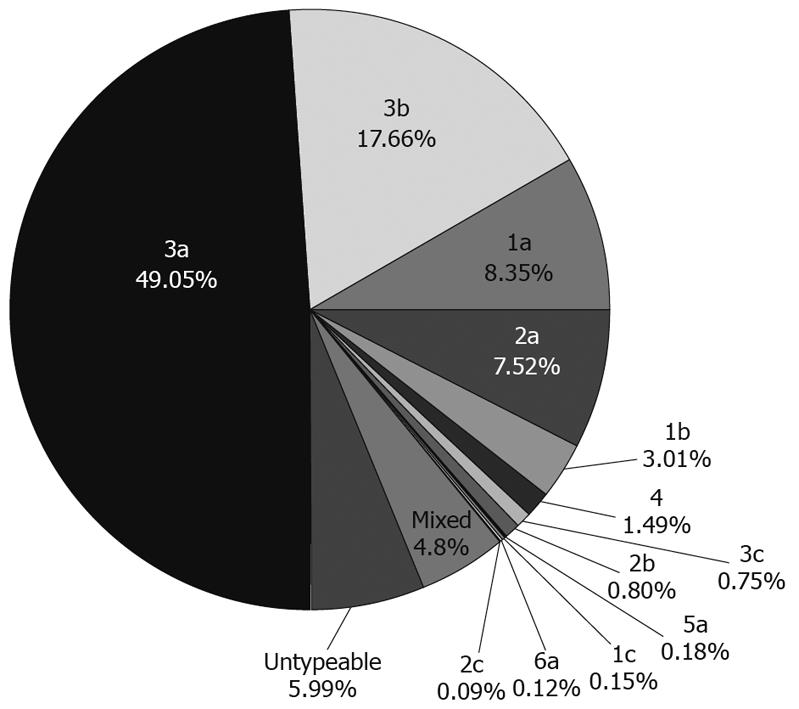 This study reviewed the seroprevalence of HCV among various population groups, along with risk factors and genotypes in Pakistan. HCV prevalence was observed in nearly 5% of the general population which is in parallel with the WHO estimates of HCV in Pakistan. High prevalence was observed in IDUs and the multi-transfused population, suggesting that the reuse of syringes was common among the injecting drug users, and that blood transfusions were not properly screened. Most prevalent genotype of HCV was 3a. The majority of HCV-positive patients had a history of facial and armpit shaving by barbers suggesting that the barbers shop was the key place for viral transmission. Condom usage was very low among the commercial sex workers and there was low awareness about sexually transmitted diseases amongst this group. In Pakistan, the number of estimated injections per person per year was very high because most Pakistanis think that injectable drugs are more efficacious than oral drugs. There was low awareness in people about the various risk factors associated with HCV transmission. Treatment of hepatitis is very expensive and is creating a huge burden on the country’s economy. More emphasis should be given to the preventive measures of the disease in order to decrease the future health and economic burden; these include screened blood transfusions, proper sterilization techniques in clinics and hospitals, use of disposable syringes and razor blades. The government should take aggressive steps to create awareness among the general public by the use of media or by modifying the school syllabus.