METHODS: We analyzed 54 cases of cytologically confirmed gastric LMC at four institutions from 1994 to 2007.

RESULTS: The male-to-female ratio was 32:22, and the patients ranged in age from 28 to 78 years (median, 48.5 years). The majority of patients had advanced disease at initial diagnosis of gastric cancer. The clinical or pathologic tumor, node and metastasis stage of the primary gastric cancer was IV in 38 patients (70%). The median interval from diagnosis of the primary malignancy to the diagnosis of LMC was 6.3 mo, ranging between 0 and 73.1 mo. Of the initial endoscopic findings for the 45 available patients, 23 (51%) of the patients were Bormann type III and 15 (33%) patients were Bormann type IV. Pathologically, 94% of cases proved to be poorly differentiated adenocarcinomas. Signet ring cell component was also observed in 40% of patients. Headache (85%) and nausea/vomiting (58%) were the most common presenting symptoms of LMC. A gadolinium-enhanced magnetic resonance imaging was conducted in 51 patients. Leptomeningeal enhancement was noted in 45 cases (82%). Intrathecal (IT) chemotherapy was administered to 36 patients-primarily methotrexate alone (61%), but also in combination with hydrocortisone/± Ara-C (39%). The median number of IT treatments was 7 (range, 1-18). Concomitant radiotherapy was administered to 18 patients, and concomitant chemotherapy to seven patients. Seventeen patients (46%) achieved cytological negative conversion. Median overall survival duration from the diagnosis of LMC was 6.7 wk (95% CI: 4.3-9.1 wk). In the univariate analysis of survival duration, hemoglobin, IT chemotherapy, and cytological negative conversion showed superior survival duration (P = 0.038, P = 0.010, and P = 0.002, respectively). However, in our multivariate analysis, only cytological negative conversion was predictive of relatively longer survival duration (3.6, 6.7 and 14.6 wk, P = 0.030, RR: 0.415, 95% CI: 0.188-0.918).

CONCLUSION: Although these patients had a fatal clinical course, cytologic negative conversion by IT chemotherapy may improve survival. 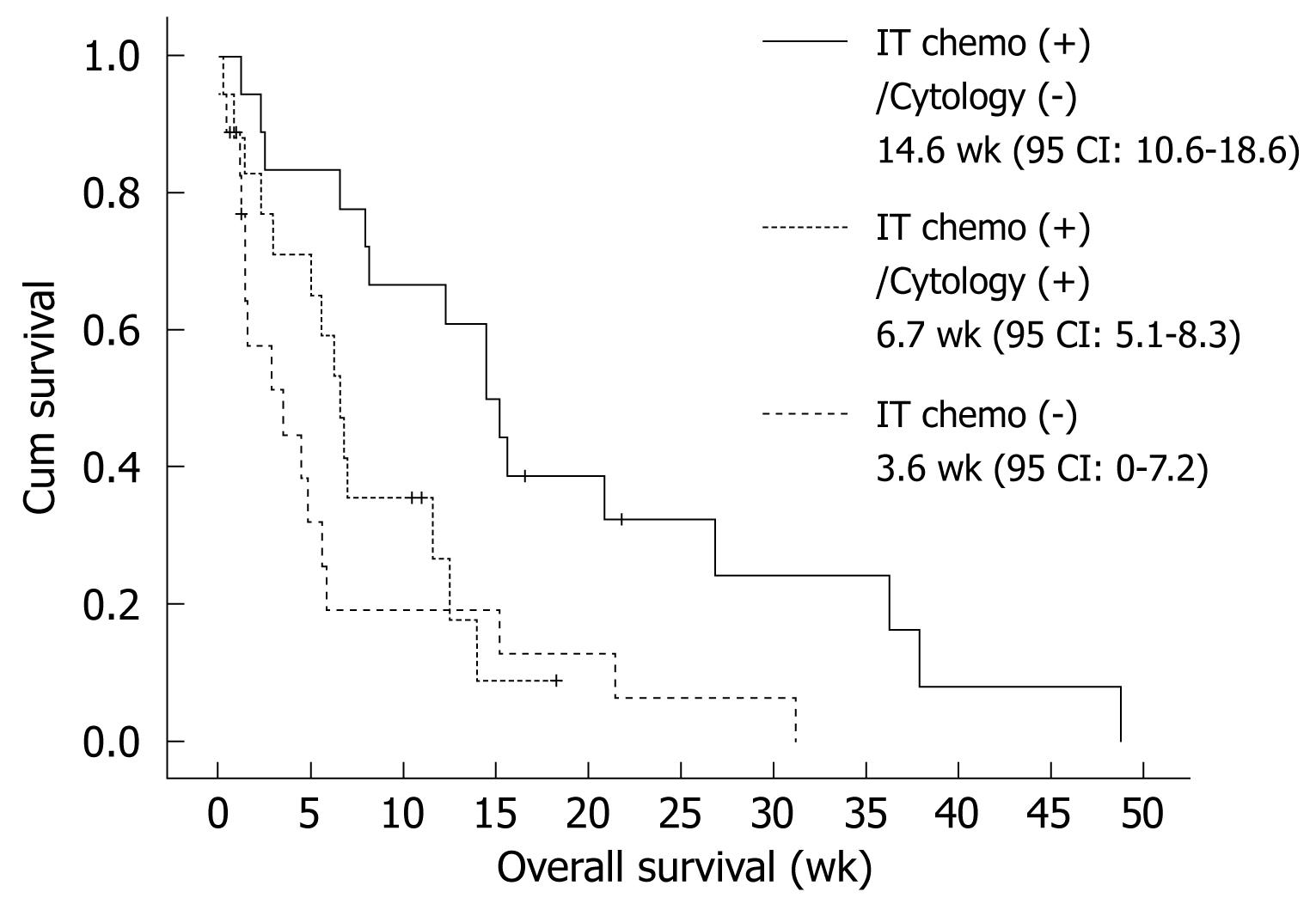 Leptomeningeal carcinomatosis (LMC) is defined as malignant infiltration of the pia mater and the arachnoid membrane. LMC is one of the most serious complications that can occur in cancer patients[1]. According to the results of a large autopsy study, the incidence of LMC was 5%-8% in cancer patients[2]. As a significant proportion of these patients have asymptomatic microscopic disease, the clinical diagnosis of LMC has been established in 2%-4% of patients during the course of their malignancy[1]. LMC is frequently detected in patients with leukemia, breast cancer, lymphoma, and lung cancer[3]. Among solid tumors, LMC is observed more frequently in cases of disseminated and progressive disease. Although a subset of patients, particularly those with lymphoma or breast cancer, may survive for more than 12 mo with a reasonable quality of life, leptomeningeal metastasis from solid tumors is associated with a poor overall prognosis. The treatment of LMC is palliative and unsatisfactory. No evidence demonstrating the superiority of intrathecal (IT) treatment compared to best palliative care is currently available from clinical trials.

Furthermore, the development of LMC from a gastric cancer is a very rare occurrence. Some articles have reported that the incidence of LMC in patients with gastric cancer was responsible for 0.16% of all cases of gastric cancer[4]. Due to its rarity, the clinical features and prognostic factors of LMC as a metastasis from gastric carcinoma have yet to be clearly characterized. The benefits of IT chemotherapy are also currently a matter of some contention.

Gastric cancer is the most common malignancy in Korea[5]. Because of the high prevalence of gastric cancer in Korea, we took the opportunity to study gastric cancer patients with LMC. The principal objective of this study was to review our experience with LMC associated with gastric cancer, and to evaluate its clinical features and the efficacy of a variety of treatment modalities in terms of neurological status and overall survival (OS).

Comparisons of categorical variables among groups were conducted using the chi-square test and Fisher’s exact test. OS was calculated from the cytological confirmation of LMC and plotted via the Kaplan-Meier method. Comparison of survival according to prognostic factors was evaluated via a log-rank test, and forward stepwise Cox proportional hazard models were employed to evaluate the joint effect of predictive variables. P < 0.05 was considered significant. Analysis of the data was conducted using SPSS for Windows V. 15.0 (SPSS Inc., Chicago, IL, USA) statistical software.

We analyzed 54 cases of cytologically confirmed gastric LMC at four institutions from 1994 to 2007. The clinical characteristics of these patients are summarized in Table 1. The male-to-female ratio was 32:22, and patients ranged in age from 28 to 78 years (median, 48.5 years). The majority of patients had advanced disease at initial diagnosis of gastric cancer. The clinical or pathologic tumor, node and metastasis stage of the primary gastric cancer was IV in 47 patients (87%). Stage I-III patients received curative operation. Among the stage IV patients, 13 patients had T4N1-2 or N3 (No. of nodes > 15) by pathologic features through curative operation. M1 node positive patients were counted as palliative surgery. Of the initial endoscopic findings in the available 45 patients, Bormann type III and IV were reported for 23 (51%) and 15 (33%) patients, respectively. Pathologically, 94% of cases proved to be poorly differentiated adenocarcinomas. Signet ring cell component was also observed in 40% of patients.

Lumbar puncture and analysis of CSF is a crucial laboratory test in the diagnosis of LMC. All the patients presented with malignant cells on cytological analysis via the inclusion criteria. An elevated opening pressure on lumbar puncture was noted in 58% of the subjects. The mean CSF pressure in the patients was 222.1 mm CSF. 78.8% and 53.8% of patients had elevated white blood cells and protein in CSF, respectively (Table 4).

IT chemotherapy was administered to 36 patients, principally with methotrexate (MTx) alone (61%) or in combination with hydrocortisone/± Ara-C (41%). The median number of IT treatments was 7 (range, 1-18). Seventeen patients (46%) achieved cytological negative conversion (Table 5).

Additional systemic chemotherapy was given to 10 patients. Three patients were treated with the orally available 5-fluorouracil (5-FU) drugs - capecitabine, S-1, and tegafur-uracil. Irinotecan/leucovorin/5-FU, 5-FU/cisplatin, and paclitaxel/cisplatin were administered to four, two and one patients, respectively. Seven patients were treated with chemotherapy plus IT chemotherapy. Three patients received chemotherapy alone. The median number of cycles administered was 2 (range, 1-6). Among the treated patients, only one exhibited a detectable response to treatment.

Adenocarcinoma is the predominant histological type in LMC of solid tumors[6]. Among patients diagnosed with LMC, the most frequently encountered solid tumors are breast (12%-34%), lung (14%-29%), and melanoma (17%-25%)[3]. Unlike Western reports, gastric cancer is the principal etiology of LMC in solid tumors in Korea[7].

LMC is an ultimately fatal disease[12-15]. A minority of patients, usually those with breast cancer or lymphoid malignancies, may achieve disease-free survival of a year or more, however, the median OS for patients with LMC is only 4-6 wk if untreated and 2-4 mo with therapy[6,12,15]. In our study, the median survival duration was just 6.7 wk. Although LMC patients tend to have a poor performance status, approximately two-thirds of patients who receive IT chemotherapy and 47.2% patients who responded to therapy achieved longer survival duration. The independent prognostic factor for survival was cytologic negative conversion by IT chemotherapy. Although the small sample size and inherent selection bias of the retrospective design of this study makes any conclusions regarding the outcomes of treatment somewhat difficult, the findings of our study indicate that cytologic negative conversion by IT chemotherapy may improve survival by arresting neurologic progression in selected patients.

MTx remains the most frequently utilized drug for IT administration, despite its limited success and serious complications[16,17]. Combination IT chemotherapy with MTx, arabinoside and hydrocortisone has been reported to be more effective than MTx alone in solid tumor LMC[18]. However, approximately 10% of gastric cancer patients were enrolled in this study, and the efficacy of arabinoside against gastric cancer is questionable.

Craniospinal irradiation may be a one-treatment modality. However, the additional or sequential role of radiation has been controversial[19]. In our study, additional effects of radiotherapy were not observed. As response to radiation is associated with the sensitivity or resistance of primary tumors and malignant cells circulating in the CSF space, radiation is occasionally not feasible for palliative treatment.

Leptomeningeal carcinomatosis (LMC) occurs in approximately 5% of cancer patients. The most common cancers involving the leptomeninges are breast and lung cancer. However, gastric adenocarcinoma has been infrequently reported in conjunction with LMC. This retrospective analysis was performed to identify the clinical features and outcomes of infrequently reported LMC of gastric cancer.

This is the first large scale study on gastric LMC. LMC is a rare component in the clinical manifestation of gastric cancer. LMC usually presents at a relatively young age, at an advanced stage, and is of a poorly differentiated pathologic type.

Although gastric LMC had a fatal clinical course, the findings of our study suggest that cytologic negative conversion by intrathecal (IT) chemotherapy may improve survival by arresting neurologic progression in selected patients.

These results could provide basic clinical data on gastric LMC for physicians and demonstrate the role of IT chemotherapy.

Leptomeninges (literally thin meninges) is a term referring to the pia mater and arachnoid mater. LMC is a condition in which a tumor diffusely spreads to the leptomeninges. Intrathecal chemotherapy involves anticancer drugs injected into the fluid-filled space between the thin layers of tissue that cover the brain and spinal cord.

The results are interesting and suggest that cytologic negative conversion by IT chemotherapy may improve survival by arresting neurologic progression in selected patients.