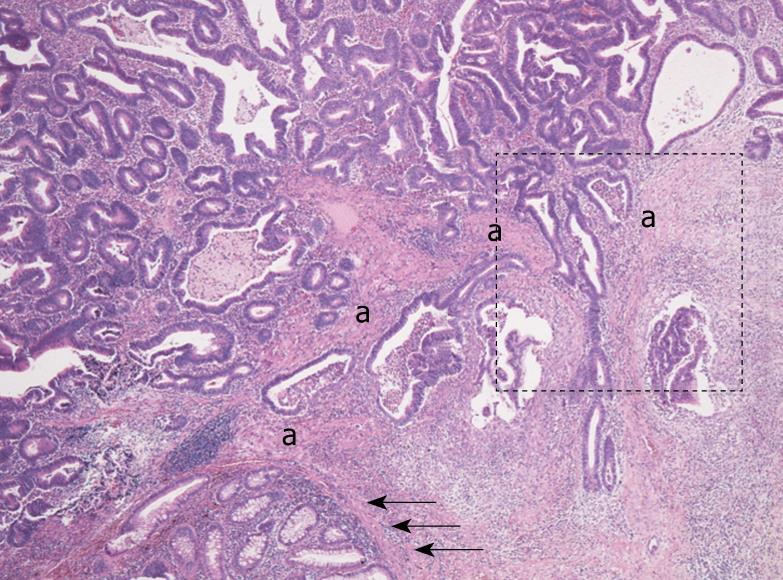 Figure 1 Low power view of an early invasive rectal adenocarcinoma with bundles of eosinophilic stromal cells (a), which are continuous with the muscularis mucosa (arrows, HE stain, original magnification × 40). 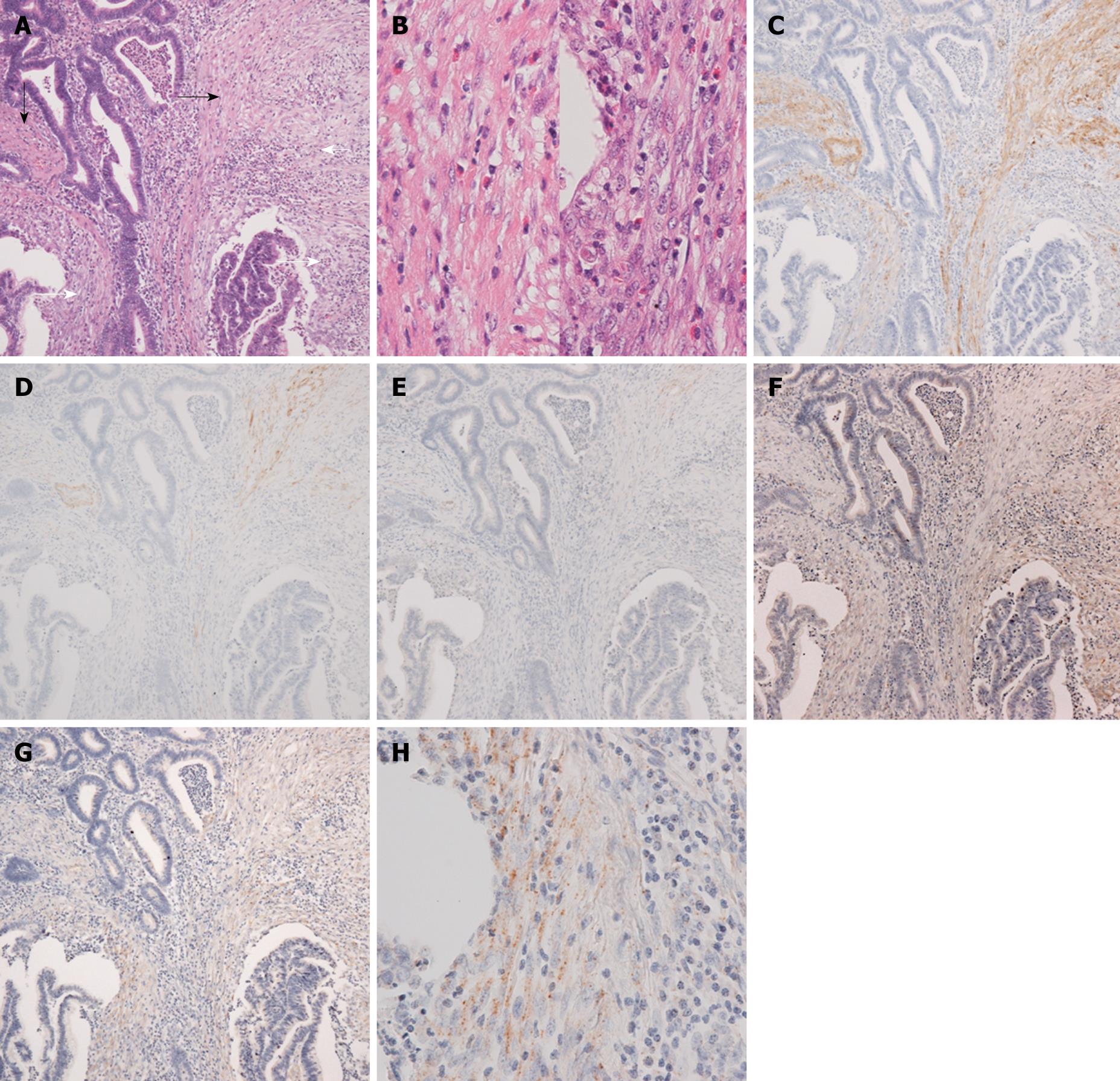 Figure 2 Middle power view of the invasive area (A) indicated by dotted box in Figure 1 shows a transition from bundles of eosinophilic stromal cells more similar to smooth muscle cells of the muscularis mucosa (black arrows) to those composed of less eosinophilic stromal cells with plumper nuclei (white arrows) (HE stain, × 100). Higher magnification of the former eosinophilic stromal cells (left) and the latter ones (right) is shown in B (HE stain, × 400). Immunohistochemistry of the serial sections demonstrates the former being more constantly positive for α-SMA compared to the latter (C), and h-CD is positive in a few cells in the former, and negative in the latter (D). Desmin is almost negative for both the former and the latter (E). Immunohistochemical expression of type I procollagen (F) and the presence of type I procollagen mRNA by in situ hybridization (G, H) are demonstrated in the latter area (original magnification of C to G, × 100). Higher magnification of type I procollagen in situ hybridization is shown in H, which demonstrates positive signals in plump stromal cells (H, × 400).

The invasion of some carcinomas is characterized by the induction of so-called desmoplastic stroma. The desmoplastic stroma is comprised of activated fibroblastic cells and the deposition of extracellular matrix (ECM) components[1-3]. The activated fibroblastic cells commonly show some morphological and phenotypic features of smooth muscle cells, and are referred to as myofibroblasts or myofibroblastic cells[4-6]. They would modulate the microenvironment and contribute to tumor invasion through production of extracellular matrices, proteases, and soluble factors[1,3,7,8].

This case study of an early invasive rectal adenocarcinoma conceivably demonstrates that one of the precursors of myofibroblastic cells in the carcinomatous desmoplastic stroma is smooth muscle cells of the muscularis mucosa, and they are responsible for production of an ECM component around the invasive carcinomatous glands, reemphasizing the importance of local resident cells in the desmoplastic reaction, and giving a hint as to the implication and a role of the muscularis mucosa in the early invasive process of colorectal carcinomas.

A rectal tumor was transanally removed from a 59-year-old Japanese male patient. The tumor was a broad-based sessile polypoid lesion of 20 mm in the largest diameter, which was fixed in 10% formalin, embedded in paraffin blocks, and stained with haematoxylin and eosin (HE) routinely. Serial sections were also made for immunohistochemistry and in situ hybridization (ISH).

Immunohistochemical staining was performed by an established indirect method using the following monoclonal antibodies (clone; source; dilution in parenthesis): anti-α-smooth muscle actin; α-SMA (1A4; Dako, Glostrup, Denmark; 1:25), anti-desmin (D33; Immunotech, Marseilles, France; 1:25), anti-high molecular weight caldesmone; h-CD (h-CD; Dako; 1:50), and anti-type I procollagen (M58; Chemicon, Temecula, CA, USA; 1:500). Antigens were retrieved by autoclaving at 121°C for 5 min in a citrate buffer before immunostaining for desmin and h-CD, and by 1% trypsin digestion for 20 min at room temperature for procollagen I. Negative control sections were incubated without primary antibodies. Submucosal arteries and part of the proper muscle layer could be available for internal positive controls for α-SMA, desmin, and h-CD. As a positive control for procollagen I, we also immunostained scar tissues which were fixed in formalin and embedded in paraffin in the same way as the present case.

Immunohistochemical examination of the cytoskeletal phenotype revealed that the former was more constantly positive for α-SMA, whilst the latter was positive for α-SMA less constantly or in a few cells (Figure 2C). The former was positive in a few cells or almost negative for h-CD and desmin, and the latter was negative for both (Figure 2D and E). The cytoskeletal feature of the muscularis mucosa was that of differentiated smooth muscle cells, namely, positive for α-SMA, desmin, and h-CD. Therefore, corresponding to the morphological transition, a continuous transition apart from the differentiated smooth muscle phenotype of the muscularis mucosa was revealed in the bundles of eosinophilic stromal cells. The presence of type I procollagen, both in protein level by immunohistochemistry and in mRNA level by in situ hybridization, was demonstrated in the less eosinophilic stromal cells with a lesser degree of differentiated smooth muscle phenotype, that is, less constantly positive for α-SMA and negative for desmin or h-CD (Figure 2F-H).

The stromal change associated with carcinoma invasion has been called desmoplasia or desmoplastic reaction, which is characterized by modifications in the composition of stromal cells and ECM components, the latter being an excessive deposition of ECM components such as collagen, fibronectin, and proteoglycan, and type I collagen is one of the ECM components which deposits in desmoplastic tumor stroma[1-3]. In the present case, type I procollagen was demonstrated in both protein and mRNA expression in the areas of eosinophilic stromal cells that showed a transition from the muscularis mucosa and a lesser degree of differentiated smooth muscle phenotype, implying that the myofibroblastic cells converted from smooth muscle cells of the muscularis mucosa could be responsible for type I collagen production and play a role in the formation of desmoplastic stroma. This notion is supported by an in vitro study that showed the induction of proteoglycan production of smooth muscle cells derived from the colonic wall by colon carcinoma cells[14].

Two different sources of myofibroblasts or myofibroblastic cells have been proposed, i.e. bone marrow-derived circulating fibrocytes and local resident cells such as fibroblasts[8], the former being stressed recently[15]. However, the result of this case study seems to reemphasize roles of local resident cells in the desmoplastic reaction associated with carcinoma invasion. During the early invasive process of colorectal carcinomas, the muscularis mucosae may not be a passive barrier through which colorectal carcinomas infiltrate into the submucosa. They may, rather, play an active role in the formation and remodeling of tumor stroma and facilitate the invasive process of carcinoma cells.