Sister Mary Joseph nodule or node refers to a palpable nodule bulging into the umbilicus and is usually a result of a malignant cancer in the pelvis or abdomen. Traditionally it has been considered a sign of ominous prognosis. Gastrointestinal malignancies, most commonly gastric, colon and pancreatic cancer account for about 52% of the underlying sources. Gynecological cancers, most commonly ovarian and uterine cancers account for about 28% of the sources. 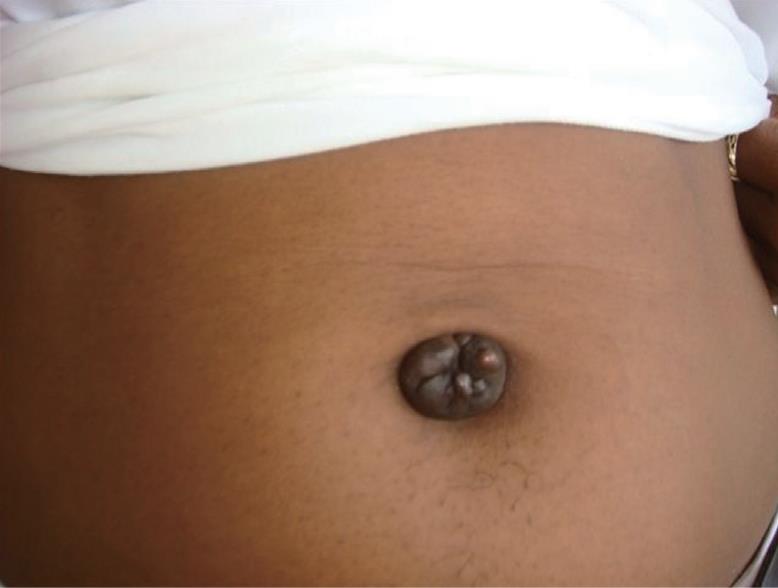 Umbilical metastases (Figure 1), also named Sister Mary Joseph node are well documented in the adult population and most usually associated with gastrointestinal or gynecologic malignancy. The appearance of this node generally indicates a grave prognosis for the patient. malignant process, this case presents a rare, but reported non-malignant lesion[1].

A 41-year-old female visiting from the Caribbean, the island of St. Vincent, presented initially to my office with abdominal pain. The history revealed she had been treated with antibiotics for her abdominal pain. Concurrently, she was prescribed birth control for presumed endometriosis for 5 mo without change in symptoms. A pelvic ultrasound revealed a leiomyomatous uterus and a 2.3 cm vascular umbilical mass. All laboratory data was within normal limits, except an elevated amylase level of 155, and a CA 19-9 level of 172 (normal < 35); CEA and CA27-29 were also normal. Since abdominal pain increased over the next 2 d she was admitted to the hospital. The CT of the abdomen/pelvis on admission revealed a large mass at the ileocecal junction with intussusceptions into the cecum without evidence of bowel obstruction. Also present were multiple large exophytic intramural and subserosal leiomyomas. Gastroenterology, Gynecology and Oncology were consulted. Since an umbilical vascular mass could not be biopsied, a colonoscopy was performed. Colonoscopy did not reveal any intra-luminal mass, however there was a significant intussusception of the ileum into the cecum. No obvious mass could be biopsied. At this time, there was still no diagnosis. It was recommended that an operative intervention was needed to excise the umbilicus for tissue diagnosis and also address the obstruction in the ileo-cecal region.

Umbilical mass and cecal mass with intussusceptions all revealed endometriosis on all frozen sections. A right hemicolectomy was performed. Intra operatively there were diffuse patches of endometriosis involving both ovaries, the cul-de-sac, the serosa of the uterus, and peritoneum. These areas were cauterized using the Bovie.

No malignancy was found in this patient.

Cutaneous metastases localized to the umbilicus are named “Sister Mary Joseph nodules”. The historical perspective of this node and its namesake is quite interesting. Sister Mary Joseph, born Julia Dempsey in 1856 was assigned to St. Mary’s Hospital (now the Mayo Clinic) in 1889 at the age of 33 years. Within 3 years she was appointed nursing superintendent. She worked with William W Mayo and his two sons, Charles H Mayo and William J Mayo. As first surgical assistant to son, William J Mayo she noted an umbilical nodule on a patient who was having surgery for an abdominal malignancy. She reported this to William J Mayo whom in 1928 reported it in the Proceedings of the Staff Meetings. It was then termed “pants button umbilicus”. By coincidence, Sister Mary Joseph, Charles H Mayo and William J Mayo all died within 3 mo of each other in 1939. These three people worked closely in developing what is now the Mayo Clinic. It was not until 1949, that Hamilton Bailey in his textbook, Physical Signs in Clinical Surgery, gave the name Sister Mary Joseph nodule to the umbilical metastasis, which usually is predictive of incurable abdominal malignancies[2,3].

This case demonstrates a non-malignant (benign) lesion that caused a metastatic umbilical nodule. In our case this was endometriosis[10]. Although rare, this nodule ranges in color from dusky red to blue to purplish as in our case. It may change in size during the menstrual cycle and may be tender, and even bleed. The ultrasound demonstrated a vascular umbilical mass. Other benign causes of umbilical nodules are fibroma, keloid, and epithelial inclusion cysts[11].