AIM: To investigate the role of neoadjuvant chemoradiotherapy in prognosis and surgery for esophageal carcinoma by a meta-analysis.

METHODS: PubMed and manual searches were done to identify all published randomized controlled trials (RCTs) that compared neoadjuvant chemoradiotherapy plus surgery (CRTS) with surgery alone (S) for esophageal cancer. According to the test of heterogeneity, a fixed-effect model or a random effect model was used and the odds ratio (OR) was the principal measure of effects. 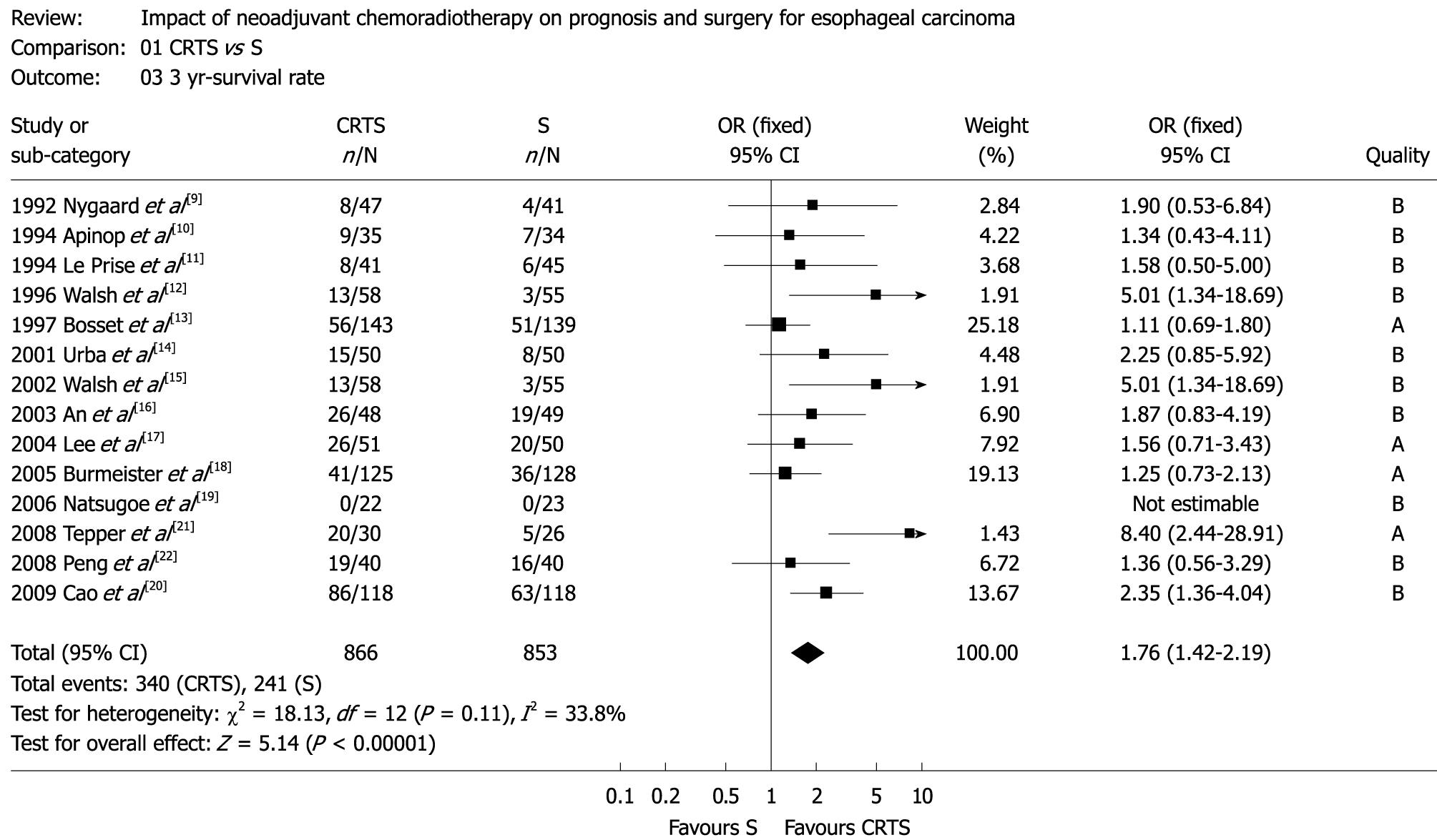 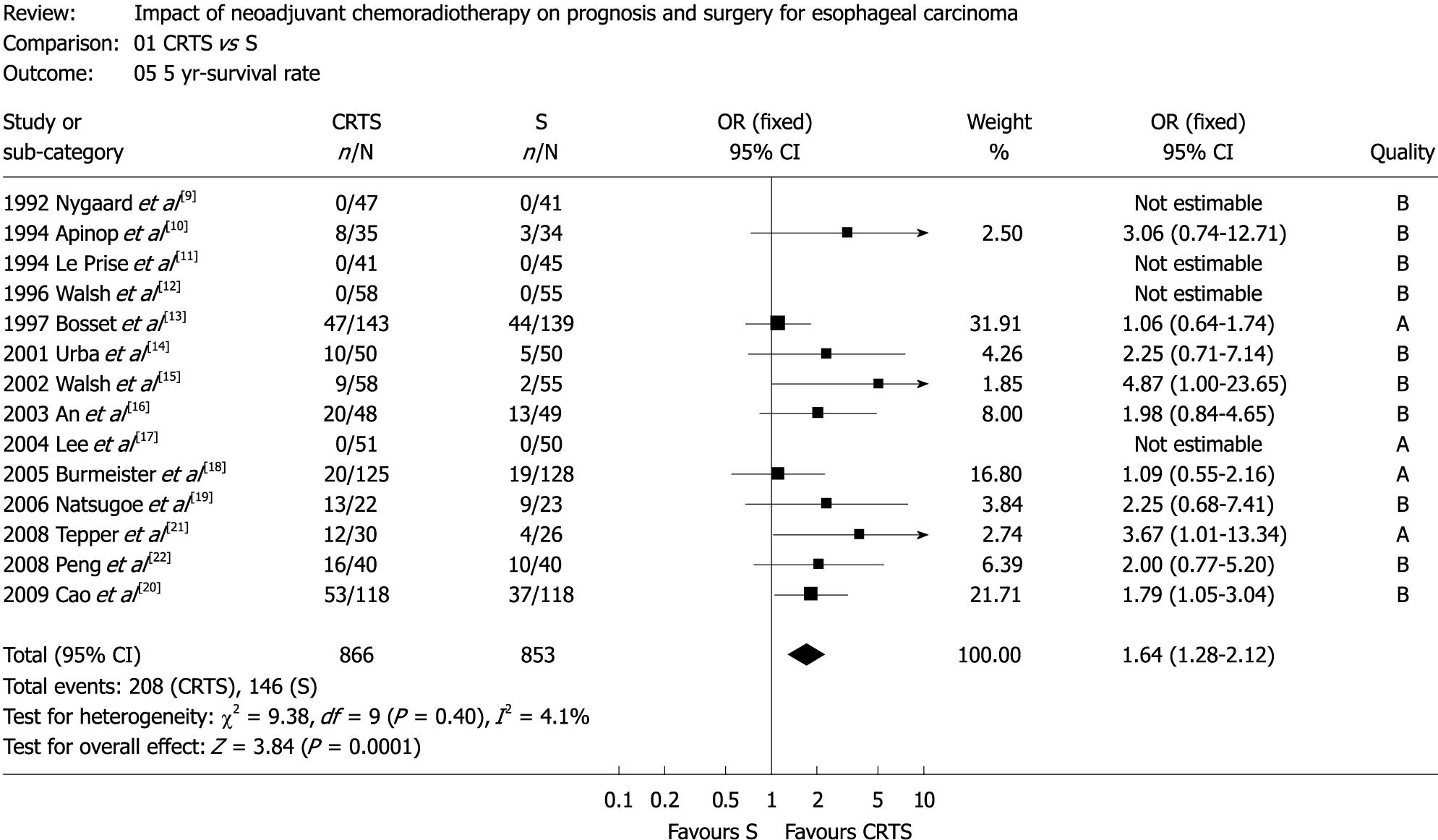 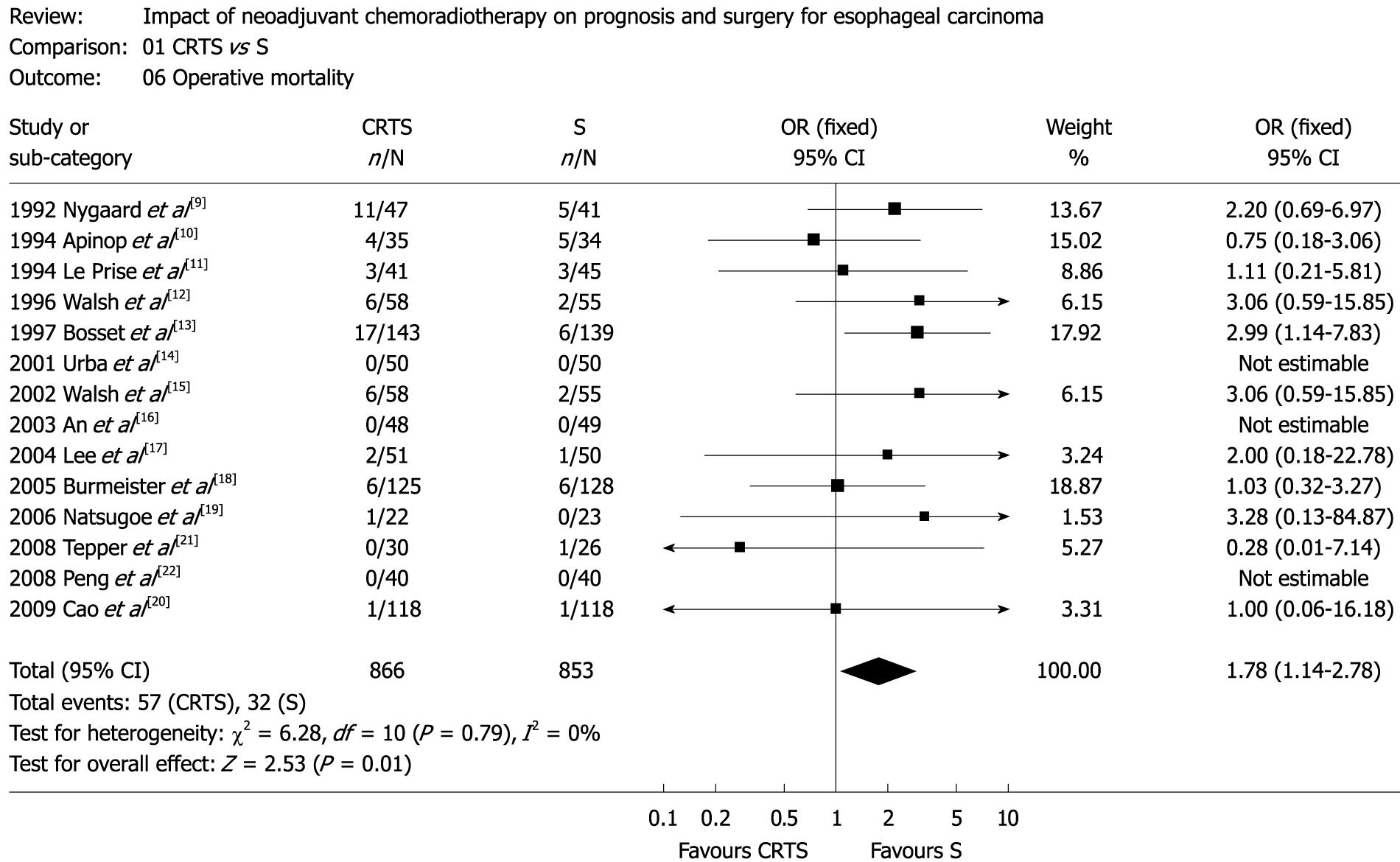 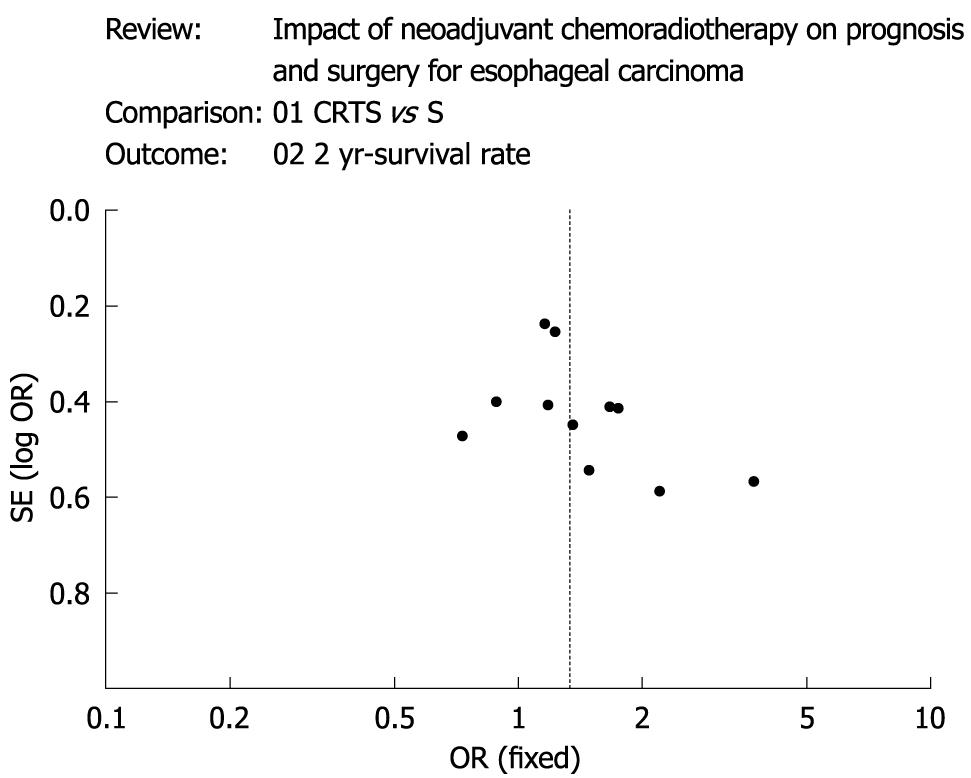 Figure 4 A funnel plot about 2-year survival with regard to the publication bias of all analysis, shows the basic symmetrical and inverted funnel-shaped graphics.

Esophageal cancer is one of the most frequently occurring malignancies and the seventh leading cause of cancer-related deaths in the world[1]. The majority of patients present with an advanced stage of disease and long-term survival is poor[2]. Esophagectomy remains a standard treatment for patients with resectable esophageal cancer, however, the 5-year survival rate is only 10%-20% in patients with advanced esophageal carcinoma treated with surgery alone[3-5]. Treatment failure mainly results from recurrence or metastasis. Most patients with seemingly resectable esophageal cancer have little prospect for cure. The proximity of the esophagus to vital mediastinal structures often compromises the completeness of cancer resection, and micrometastatic systemic disease is often present at the time of initial cancer diagnosis. These two limitations of surgical therapy set the stage for cancer recurrence, both local-regional and systemic. Radiotherapy can control local-regional esophageal cancer and chemotherapy, usually including cisplatin and 5-fluorouracil, has both local and systemic antineoplastic activity. Several studies have also suggested improved long-term survival rates with combined chemotherapy, radiotherapy and surgery in patients with resectable esophageal cancer[6-8].

So we performed a meta-analysis of RCTs that compared chemoradiotherapy plus surgery (CRTS) with surgery alone (S) in patients with resectable esophageal carcinoma.

PubMed and manual searches were done (independently and in duplicate) to identify all published (manuscripts and abstracts) RCTs that compared CRTS with S for resectable esophageal cancer. Trials were not excluded because of cancer histology (squamous or adenocarcinoma) or language of publication. The PubMed search was done on PubMed (available at: http://www.ncbi.nlm.nih.gov/entrez/query.fcgi). A set was created using the terms “esophageal neoplasms/surgery OR esophagectomy OR oesophagectomy OR esophageal cancer OR oesophageal cancer.” This yielded 37 604 citations (June 30, 2009). Another set was created using the terms “antineoplastic agents OR chemotherapy OR radiotherapy.” This yielded 2 448 725 citations. The two sets were combined using the Boolean operator “AND” to give 8974 documents on chemotherapy, radiotherapy, and surgery for esophageal cancer. This set was limited to “RCT” to yield 340 documents. These documents were reviewed to identify RCTs that compared CRTS with S. Fourteen studies were identified and retrieved[9-22]. We did not attempt to identify unpublished RCTs. In total, 14 RCTs were found and these trials form the basis of the meta-analysis.

Given the limited number of RCTs, we designed the article selection process to be inclusive as opposed to exclusive. Meanwhile, trial validity assessment was done independently and in duplicate, and a trial quality assessment was assigned (A to C) according to the Cochrane Reviewers’ Handbook 4.2.2[23]. If reviewers disagreed on the quality assessment, discrepancies were identified and a consensus was reached. Trial data abstraction was also done independently and in duplicate, and any discrepancies in data abstraction were examined further and resolved by consensus.

According to the test of heterogeneity, we selected a fixed effect meta-analysis model or a random effect model. This gives conservative confidence intervals and minimizes the risk of erroneously assigning benefit to the treatment group. Odds ratio (OR) was the principal measure of effect. ORs are presented as a point estimate with 95% confidence intervals (CI) and P values in parentheses. ORs are calculated as treatment (CRTS) vs control (S), and a number greater than one favors the CRTS group (higher frequency of desirable events). Funnel plot analysis did not suggest publication bias against negative trials[24]. Review Manager 4.2 [Review Manager (Rev Man), (Computer program), Version 4.2 for Windows, Oxford, England: The Cochrane Collaboration, 2003] software was used.

Median survival data could not be combined using meta-analysis methods because there was insufficient documentation of original patient data in many trials.

The CRTS, an intuitively appealing treatment strategy, has brought about dramatic clinical and pathological responses in randomized esophageal cancer trials[37,38]. Both chemotherapy and radiotherapy may be active against different tumor cell population, the chemotherapy may be effective against micrometastases while radiation is spatially cooperative. Neoadjuvant chemoradiotherapy can facilitate resection by down-staging tumors[39,40]. However, whether or not CRTS actually increases long-term survival remains controversial, meanwhile CRTS seems to increase the morbidity and mortality of esophagectomy, so it is uncertain whether such a potential survival benefit outweighs the morbidity caused by such a treatment. A surgery alone is therefore still considered to be appropriate in randomized phase III studies for patients with esophageal cancer.

As yet only few meta-analyses examining the effectiveness of CRTS in patients with esophageal cancer has been published, and the previous analysis mainly focused on the 3-year survival[35,36]. In contrast, our analysis pooled later survival data (up to 5-year survival) and more RCTs (up to 14 studies), which is more exhaustive. Our data contained the most cases (up to 1737 patients), meanwhile our funnel plot showed little publication bias. For all of these reasons, our findings may be more robust. Our meta-analysis of RCTs showed a long-term survival benefit for the neoadjuvant chemoradiotherapy and surgery for resectable esophageal cancer. The survival benefit is involved in improved local-regional cancer control brought about by the neoadjuvant arm. Nevertheless, CRTS did not significantly reduce the incidence of distant recurrence. The sensitivity analysis of this regime showed the advantage of concurrent chemoradiotherapy, with maximal antineoplastic synergy between chemotherapeutic agents and radiation treatment, as compared with sequential chemoradiotherapy.

There was conspicuous difference between resection and complete resection rates for the two groups. More patients treated with S likely underwent esophageal resection, but more patients treated with CRTS likely underwent a complete resection. This indicates that CRTS downstages tumors and facilitates complete resection, which is also supported by the lower rate of local-regional cancer recurrence in the neoadjuvant chemoradiotherapy group. Although there was no significant difference for all treatment mortality between CRTS and S group (OR: 1.12, 95% CI: 0.89-2.48, P = 0.503) and adverse treatment events (OR: 1.33, 95% CI: 0.94-1.88, P = 0.04), our analysis showed a significant trend with respect to increased operative mortality (OR: 1.78, 95% CI: 1.14-2.78, P = 0.79) in the CRTS group. It is no doubt that surgeons will undertake a challenging esophagectomy resulting from operative difficulty and postoperative complications when performed after neoadjuvant chemoradiotherapy. For example, radiation might contribute to the failure of anastomotic leak and postoperative acute lung injury. Whether or not the survival benefit of neoadjuvant chemoradiotherapy can be negated by an increase in postoperative deaths has brought about extensive concerns.

In conclusion, this meta-analysis of RCTs that compared CRTS with S for resectable esophageal carcinoma showed a long-term survival benefit and reduced local-regional cancer recurrence for neoadjuvant chemoradiotherapy. Moreover, concurrent neoadjuvant chemoradiotherapy is more effective. CRTS has a higher rate of complete (R0) resection. There is no significant difference, but a trend of lowered rate of esophageal resection. In addition, it is concerned that this neoadjuvant approach is associated with increased mortality.

Esophagectomy is a standard treatment for resectable esophageal carcinoma but relatively few patients are cured. Combined neoadjuvant chemoradiotherapy with surgery may improve survival but there is concern about treatment morbidity.

This meta-analysis investigated the survival data (up to 5-year survival) and RCTs (up to 14 studies).

The study can be applied as a guidance of neoadjuvant chemoradiotherapy in prognosis and surgery for esophageal carcinoma.

The manuscript gives results from a meta-analysis on the effects of neoadjuvant chemoradiotherapy on survival for esophageal carcinoma. The authors performed and reported a detailed literature search and analyzed 14 publications with regard to several survival end-points. The topic is interesting and statistical methods are appropriate. In the discussion, the authors describe that their meta-analysis is more detailed than previous ones which focus on the 3-year survival.