This study reports a case of unresectable intrahepatic mass-forming cholangiocarcinoma which showed a dramatic response to gemcitabine that led to curative resection and a long-term survival of more than five years. Six and five cycles of gemcitabine monotherapy were administered separately over a three-year period and a radical excision was performed at 4.5 years after diagnosis. This case indicates the role of gemcitabine as a neoadjuvant chemotherapeutic agent for cholangiocarcinoma and guarantees a randomized controlled prospective study. 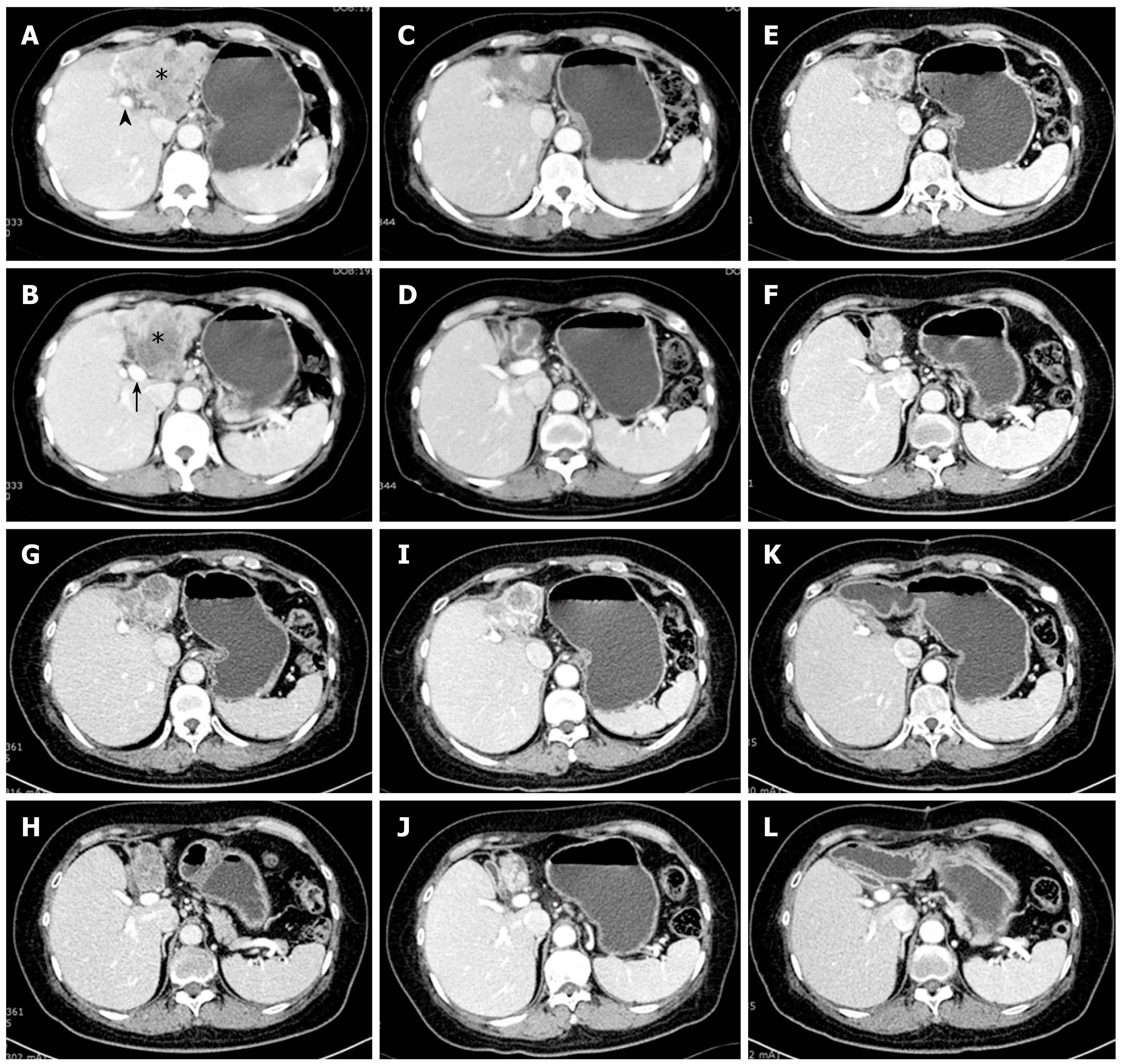 Figure 1 Abdominal CT scan images at two different levels are shown serially. A: At left portal vein level (black arrowhead), a 10 cm sized irregular hypovascular mass (asterisk) occupying left hepatic lobe is shown; B: At lower, main portal vein level (black arrow), the inferiorly grown mass is shown. Invasion of middle hepatic vein and left portal vein were strongly suggested with multiple lymph node enlargements at the liver hilum and lesser omentum; C and D: On CT scan taken after the end of the first 6 cycles (18 times) of gemcitabine chemotherapy, the tumor mass decreased in size dramatically, smaller than half of the previous diameter; E and F: On CT scan on 3 years and 3 mo from diagnosis, mass does not show any significant change except for a little sclerotic change; G and H: On CT scan on 4 years from diagnosis, tumor mass shows re-increment of the size than previous study; I and J: On follow up CT scan after second 5 cycles of gemcitabine chemotherapy, partial response is shown again with slight decrease of the mass size; K and L: On CT scan taken 11 months after R0 resection, there is no any recurrence or new lesion growing. 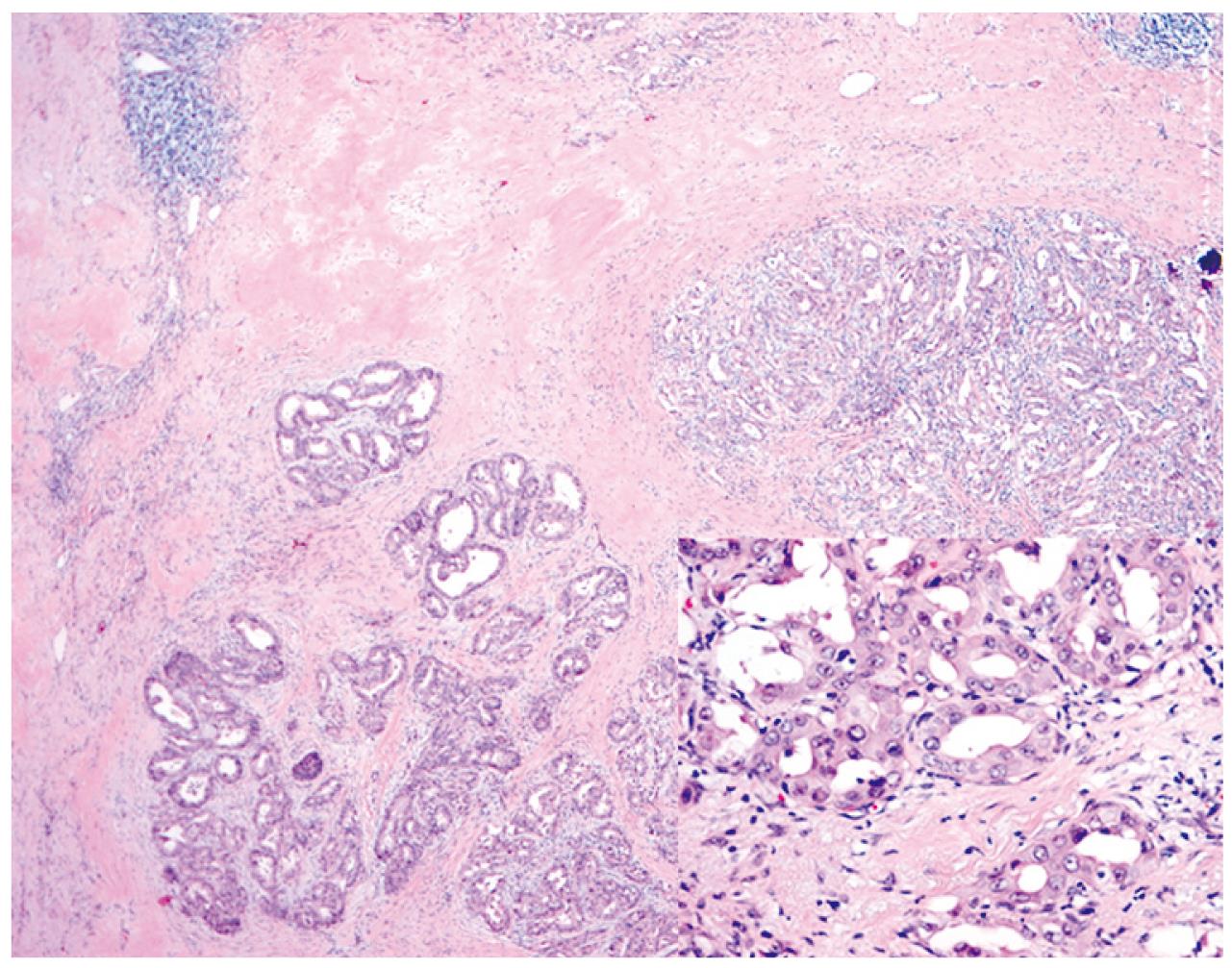 Cholangiocarcinoma is a devastating malignancy with a poor prognosis. Early diagnosis and extensive surgery offers the only chance for cure although other treatment modalities have been applied. Response rates to chemotherapy are relatively low although several kinds of chemotherapeutic agents such as gemcitabine are known to be effective. Furthermore, the role of neoadjuvant chemotherapy for unresectable cholangiocarcinoma has not been established either. Here we report the case of a patient with huge intrahepatic mass-forming cholangiocarcinoma who showed repetitive responses to a gemcitabine single regimen, and eventually underwent curative resection that led to long-term survival of more than five years.

A 54-year-old female patient was admitted with mild epigastric discomfort and a liver mass was detected by ultrasonography in January 2004. She had a history of cholecystectomy due to gallstone disease 20 years ago. She denied any recent history of medication or herbal treatments. She had never consumed raw fresh-water fish. An abdominal computed tomography (CT) scan showed a 10 cm sized irregular hypovascular mass occupying the left hepatic lobe and growing inferiorly to compress the gastric antrum and the pancreas (Figure 1A). Invasion of the middle hepatic vein and left portal vein were strongly suggested. Multiple lymph node enlargements were noted at the liver hilum and lesser omentum. Laboratory data showed a white blood cell count of 9560/mm3 (normal 4800-10 800 mm3), hemoglobin 15.8 g/dL (normal 13-18 g/dL), platelet count of 203 000 /mm3, AST 33 IU/L (normal 12-33 IU/L), ALT 20 IU/L (normal 5-35 IU/L), total bilirubin 0.9 mg/dL (normal 0.2-1.2 mg/dL), and albumin 4.6 g/dL (normal 3.5-5.3 g/dL). A tumor marker study revealed AFP 2.3 ng/mL (normal 0-8 ng/mL), CEA 2.2 ng/mL (normal 0-5 ng/mL), and CA19-9 17.6 U/mL (normal 0-36 U/mL). A serologic study showed HBs Ag (-), ANA (-), HCV Ab (+) and HCV RNA PCR (-). Esophagogastroduodenoscopy and colonoscopy were nonspecific except for mild chronic gastritis and a small hyperplasic rectal polyp. An abdominal magnetic resonance imaging (MRI) reported T1 low and T2 slightly high lobulated contour solid mass showing a similar invasion pattern with the CT scan. Biliary dilatation at the upper portion of the mass was seen (image not shown). Percutaneous needle biopsy from the mass reported well differentiated cholangiocarcinoma (image not shown). Histochemical and immunohistochemical study showed tumor cells were positive for CK-7, and negative for CK-19, and CK-20. An extended surgery was recommended to the patient after explaining the degree of tumor invasion and low possibility of curative resection. However, the patient declined any kind of treatment including surgery and chemoradiotherapy. After 3 mo from diagnosis, the patient was persuaded to undertake chemotherapy. Gemcitabine monotherapy was provided as intravenous 2 h infusions of 1000 mg/m2 body surface area weekly every three out of 4 wk. A total of six cycles of chemotherapy were treated tolerably.

The CT scan taken on October 2004 (10 mo after diagnosis) showed that the tumor mass dramatically decreased in size and was smaller (half of the diameter) than that of the previous CT (Figure 1B). Surgery was again recommended to the patient. However, the patient declined surgery and further chemotherapy. After ending chemotherapy treatment the tumor mass did not show any significant change on a regular CT scan over 3 years and 3 mo except for a little sclerotic change (Figure 1C).

Unfortunately, an abdominal CT scan in January 2008 showed a slight increase of the mass with a symptomatic complaint of fatigue (Figure 1D). Gemcitabine treatment was restarted under the same protocol as the previous one. The patient barely finished five cycles of treatment due to various symptoms such as weakness or edema. On follow up CT scan in May 2008, a partial response was repeated with a slight decrease in the mass size (Figure 1E). Radical surgery was recommended and the patient agreed to it. A curative resection of atrophied left liver including the mid-hepatic vein and extrahepatic bile duct was performed. A hepatico-enterostomy was followed after the resection. Histological findings of the resected specimen showed well differentiated cholangiocarcinoma composed of a glandular structure lined by cuboidal mucin-producing epithelium resembling cholangiocytes and a dense fibrous stroma with desmotic reaction (Figure 2). All resection margins were negative for malignancy microscopically. One cycle of adjuvant gemcitabine chemotherapy was administered due to concern about remnant tumor cells. On a CT scan taken 11 mo after R0 resection, there was no recurrence or new growing lesion (Figure 1F). In July 2009, 5 years and 6 mo from diagnosis (1 year from the surgical resection) the patient is living well without any symptoms.

The establishment of an optimal chemotherapeutic regimen for cholangiocarcinoma is necessary because most of the patients are diagnosed in an advanced stage and curative resection would not be viable. Gemcitabine is known as one of the most effective agents for cholangiocarcinoma and response rates were reported as 20%-35%[1] for a single regimen[2] or in combination with other agents such as 5-FU (or capecitabine)[3], mitomycin-C[4], or a platinum analog[5]. This case study showed repetitive responses to a gemcitabine single agent regimen given separately over a long-term interval. Tumors were observed to be strongly repressed for more than three years after the first cycle of treatment.