A desmoplastic small round cell tumor (DSRCT) is a rare, aggressive mesenchymal neoplasm. Although a DSRCT can develop at various sites, the intra-abdominal site is the most common location. These tumors are found most commonly among young adolescents and the prognosis is extremely poor. Multimodal treatment with surgery, chemotherapy and radiotherapy is very important for these rare cases, and this treatment can improve patient survival. In this report, we describe the case of an 8-year-old boy diagnosed with DSRCT located in the retroperitoneal space. The patient has undergone surgical resection and adjuvant chemoradiation therapy, and is currently alive without disease recurrence.

Figure 1 CT (A and B) shows a septated, very large (about 21. 8 cm × 16.7 cm), predominantly cystic, lobulated mass in the right upper quadrant between the liver and the right kidney. 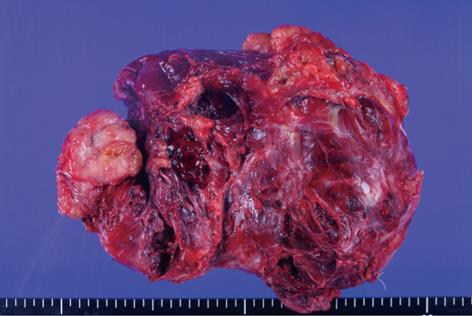 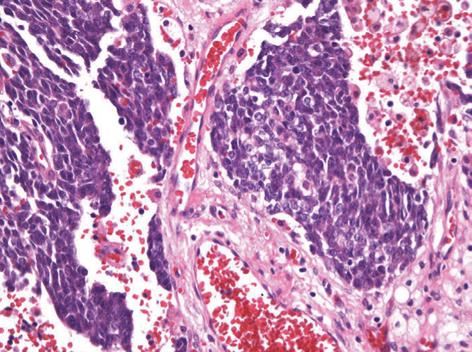 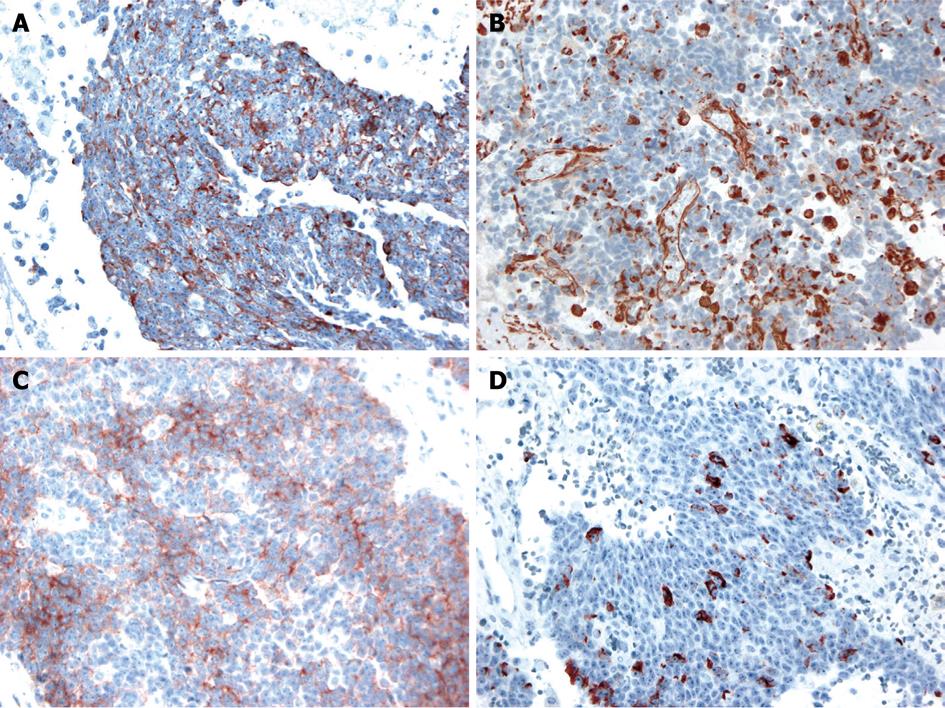 A desmoplastic small round cell tumor (DSRCT) is a rare, aggressive mesenchymal neoplasm with an extremely poor prognosis. It was described initially as a distinct clinicopathological entity by Geral and Rossi in 1989[1]. This rare, highly malignant tumor belongs to the primitive tumor family of small round cell tumors (lymphoma, neuroblastoma, alveolar rhabdomyosarcoma, Ewing’s sarcoma, neuroectodermal tumor, and DSRCT)[2,3]. Young adolescent males are most commonly affected[4]. Its primary location is in intra-abdominal sites, but it can also be found at other sites such as the kidney and ovary, as well as in the retroperitoneal space[5-7]. In addition, these tumors are associated with a specific reciprocal translocation t (11:22) (p13:q12) that leads to the fusion of the WT1 (Wilms’ tumor gene) and EWS (Ewing’s sarcoma gene). Patients with this tumor have a very poor prognosis, but multimodal treatment with surgery, chemotherapy and radiotherapy can improve survival[8,9].

We describe here a case of retroperitoneal DSRCT in a boy, who was treated with surgery and adjuvant chemoradiotherapy.

An 8-year-old boy with no previous health problems was referred to our hospital with a 2-wk history of a palpable abdominal mass. The family history was non-contributory and there were no complaints except for abdominal pain and indigestion. The physical examination showed an approximately 20-cm palpable abdominal mass predominantly on the right side of the abdomen, with mild tenderness. The laboratory tests showed no significant abnormalities. Computed tomography (CT) showed a septated, very large (21 cm × 17 cm), predominantly cystic, lobulated mass in the right upper quadrant of the abdomen between the liver and the right kidney (Figure 1). The vena cava and the duodenum were deviated to the left side of the abdomen because of the mass effect of the lesion. Upon magnetic resonance imaging (MRI), the lesion had a T1-attenuated high signal suspicious for a high protein content, a predominantly cystic portion with a large solid portion on the medial aspect, and no definite direct invasion into the major vessels. The radiologist suspected an undifferentiated embryonal sarcoma that originated from the liver, or a mesenchymal hamartoma. Surgery was planned for a definitive diagnosis and a proper management.

The operative findings revealed a mass of about 20 cm, irregular in shape, with cystic and solid components. As it was located in the retroperitoneal space, the liver, inferior vena cava, duodenum, right kidney, and intestine were deviated to the left and downward. To obtain a good operative field, we aspirated about 500 mL of brown-colored cystic fluid from the cystic portion of the tumor, and a small portion was excised for frozen sections. Examination of frozen sections revealed that the tumor was highly suggestive of malignancy, and we excised the entire lesion. Since there were severe adhesions to the surrounding tissue and important abdominal vessels such as the inferior vena cava, right renal vessels and celiac trunk, the dissection required a long time and there was a large amount of bleeding. Grossly, there was no evidence of peritoneal seeding or hepatic metastasis. The mass was totally removed without significant problems (Figure 2). The operative time was 500 min, blood loss was about 2 L and eight units of packed red blood cells were transfused. The microscopic examination confirmed a retroperitoneal DSRCT, with the typical appearance of well-defined nests or clusters of small undifferentiated round cells, surrounded by a prominent desmoplastic stroma (Figure 3). Upon immunohistochemical staining, there were positive responses to cytokeratin, vimentin, CD99, and desmin (Figure 4). In addition, there were focal weak positive responses to S-100 and neuron-specific enolase (NSE).

After confirmation of the diagnosis, postoperatively, the patient received adjuvant chemotherapy (vincristine, ifosfamide, doxorubicin, etoposide and cyclophosphamide) in combination with consolidating radiotherapy (25 times180 cGy/d, a total dose of 45 Gy). The patient is free of disease recurrence 24 mo after resection and adjuvant chemoradiotherapy.

DSRCT is an aggressive malignant tumor with a poor prognosis. Abdominal pain or discomfort is the most common presentation for this rare neoplasm. Its primary location is the intra-abdominal peritoneal cavity, but many other sites have been described[10]. The most common sites of peritoneal involvement have been reported to be the pelvic space, omentum, small bowel mesentery, and the retroperitoneal space. This tumor is typically found in young adolescent men (male:female ratio = 5:1). Usually, it is accompanied by extensive peritoneal seeding at the time of diagnosis[9,10].

Although the findings are nonspecific, CT is the most widely used diagnostic modality for identifying this tumor. It can detect a bulky, lobulated and heterogeneous mass with or without calcification. Sometimes, ascites, adenopathy or liver metastases are found. Upon MRI, T2-weighted imaging shows a heterogeneous hyperintense signal with low or isodense T1-weighted signals. No specific tumor markers have been identified[11].

Histopathologically, the characteristic findings are well-defined nests or clusters of undifferentiated small round cells, surrounded by a prominent desmoplastic stroma. The tumor cells are characterized by small hyperchromic nuclei with scanty cytoplasm. Immunohistochemistry can be positive for AE1/AE3 (88%), desmin (dot pattern, 81%), CD99 (23%), or NSE (84%)[11]. This tumor is associated with a specific reciprocal translocation t (11:22) (p13:q12), which leads to fusion of the WT1 and EWS genes; this rearrangement is detected in almost all cases. The resulting chimeric protein is thought to be a transcriptional activator that fails to suppress tumor cell growth[3].

Although the prognosis is very poor, aggressive surgical tumor resection is the major determinant of patient survival. Lal et al[9] recommended surgical resection of > 90% of the tumor burden. Attempts were not made to achieve microscopically negative resection margins. They used systemic chemotherapy, with the P6 protocol including cyclophosphamide, doxorubicin, vincristine, ifosfamide and etoposide. They reported a good response with this regimen. Adjuvant radiotherapy to the whole abdominopelvic area was also delivered. With this multimodal therapy, including the P6 protocol, > 90% resection, and adjuvant radiotherapy, there was a statistically significant prolongation of patient survival[9]. The presence of nodal invasion and metastasis does not appear to correlate with overall patient survival. The expected 3-year survival was only 27% when multimodal treatment was not used[9]. We used a similar strategy for the treatment of our patient; the patient is free of disease recurrence 2 years after surgery and adjuvant chemoradiotherapy. The platelet-derived growth factor receptor pathway inhibitor SU101 (leflunomide) is being studied in a pediatric phase I trial. The possibility of improved future treatments might help to prolong the survival of patients with DSRCT[12].

In summary, we present a patient with retroperitoneal DRSCT, and expect a longer survival as a result of our aggressive surgical resection and adjuvant chemoradiotherapy.