AIM: To identify prognostic factors of patients with hepatocellular carcinoma (HCC), who were treated by orthotopic liver transplantation (OLT).

RESULTS: The median follow-up was 13.0 mo (2.8-69.5 mo). Overall, 1-, 2-, 3- and 5-year actuarial survival was 73.3%, 45.6%, 35.4% and 32.1%, respectively. One-, 2-, 3- and 5-year overall recurrence-free survival was 67.0%, 44.3%, 34.5% and 34.5%, respectively. In univariate analysis, number of tumors, total tumor size, lobar distribution, differentiation, macrovascular invasion, microvascular invasion, capsulation of the tumor, and lymph node metastasis were found to be associated significantly with actuarial and tumor-free survival. By means of using the multivariate Cox proportional hazards model, total tumor size and macrovascular invasion were found to be independent predictors of actuarial and tumor-free survival. When the selection criteria were expanded into the proposed criteria, there was no significant difference in 1-, 2-, 3- and 5-year actuarial and tumor-free survival of the 49 patients who met the proposed criteria (97.6%, 82.8%, 82.8% and 82.8%, and 90.7%, 82.8%, 68.8% and 68.8%, respectively) compared with that of patients who met the Milan or University of California, San Francisco (UCSF) criteria.

CONCLUSION: Macrovascular invasion and total tumor diameter are the strongest prognostic factors. The proposed criteria do not adversely affect the outcome of liver transplantation for HCC, compared with the Milan or UCSF criteria. 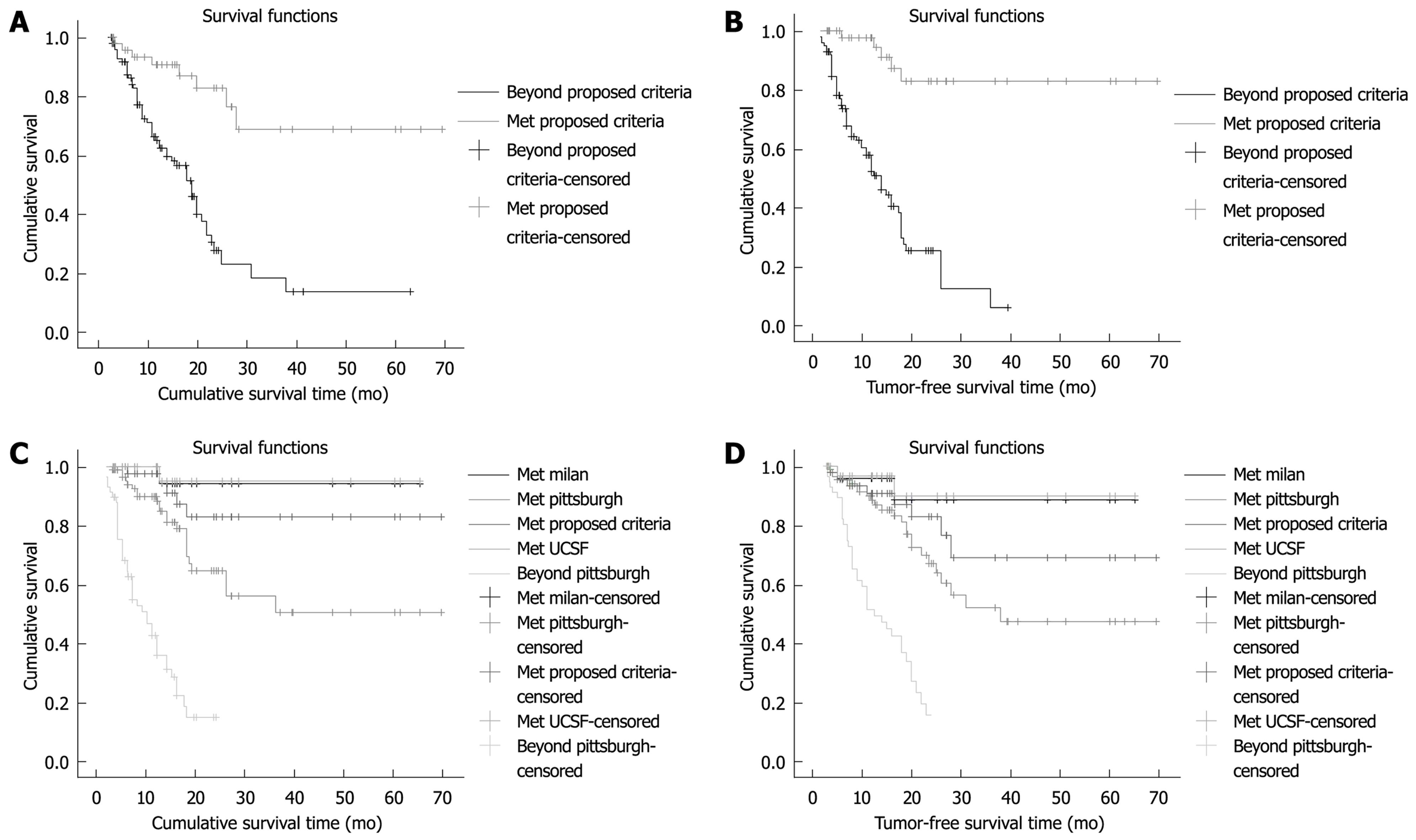 In the 1980s, outcomes for orthotopic liver transplantation (OLT) for hepatocellular carcinoma (HCC) were discouraging. There were high recurrence rates and a low patient survival of 30% at 3 years[1]. After the Milan criteria (single tumor up to 5 cm or up to three tumors up to 3 cm) were introduced by Mazzaferro et al[2] in the early 1990s, recurrence rate fell to 8%, and tumor-free patient survival at 4 years was 83%. With worldwide adoption of these criteria, 5-year survival rates rose to 60%-80%[3-5].

Recently, there have been numerous proposals for expanding the Milan criteria. The University of California, San Francisco (UCSF) proposed an expansion of transplantation criteria[6]. The expanded criteria includes having a single tumor < 6.5 cm in diameter, or having no more than three tumors, the largest of which is < 4.5 cm in diameter, and with a total tumor diameter of < 8 cm. Using these criteria, 1- and 5-year recurrence-free survival rates were 90% and 75.2%, respectively. Marsh et al[7] have studied 407 cases who underwent OLT at the University of Pittsburgh between 1981 and 2002, and found that patients who exceeded the Milan criteria had a 49.7% recurrence-free survival rate at 5 years. Todo et al[8] have reported that patients with unresectable HCC who underwent living donor liver transplantation under the expanded indication criteria had 3-year survival and disease-free survival rates of 60.4% and 52.6%, respectively. In Kyoto[9], the only OLT exclusion criteria are for patients with extrahepatic metastasis or macroscopic vascular invasion, and there are no restrictions based upon on the number or size of tumors. There was no difference in the 4-year survival rate in the Kyoto study between patients with HCC who fit (66%) or do not fit (60%) the Milan criteria. Therefore, it has been suggested that there are differences in OLT criteria between the East and West, which may be correlated with race or combinations of underlying hepatic diseases.

Worldwide, 55% of HCC cases and deaths occur in China[10]. Over 90% of HCC patients in China are also infected with hepatitis B virus (HBV). These rates are different from those in Europe, America, and even Japan. To explore these issues, we evaluated the OLT outcomes for HCC patients at the Liver Transplantation Center of the West China Hospital, Chengdu, China. We aimed to analyze the effect of HCC prognostic factors on actuarial and recurrence-free survival after OLT, and to reevaluate the prediction criteria that are the basis for OLT selection.

Between January 2000 and October 2006, a total of 424 OLTs were performed at the Liver Transplantation Center of the West China Hospital. Among these, 165 (38.9%) patients were diagnosed with HCC, and 148 underwent follow-up. Follow-up excluded 17 patients who died of complications during the 3-mo period after the operation. Of the 148 HCC patients, 146 were diagnosed with HCC before liver transplantation. In two patients, HCC was found incidentally by pathological examination of the explanted liver after transplantation. Preoperative clinical data of the 148 HCC patients are shown in Table 1. Liver transplantation was considered for patients with HCC if the tumor was determined to be unresectable because of its location, or because of concomitant liver disease and HCC without extrahepatic spread.

Preoperative diagnosis of HCC was made using artery high-flow perfusion and imaging examinations, which showed intrahepatic tumors. Examinations included at least two of the following three methods: ultrasound, contrast-enhanced computed tomography (CT) and magnetic resonance imaging (MRI). Macroscopic vascular invasion was observed using Doppler ultrasonography and contrast-enhanced CT before operation, and was validated through pathological examination of the impaired liver after operation. Diagnosis of HCC was confirmed by fine-needle aspiration cytology or biopsy of all known tumors. Pretransplant studies in patients with HCC included abdominal, thoracic, and head CT scans and bone scintigraphy to rule out extrahepatic tumor spread.

The patients were followed for tumor recurrence with CT scans and α-fetoprotein level (AFP) every 6 mo for 5 years. Annually thereafter, or as the clinical situation dictated, suspicious lesions in the liver or lung were biopsied. Bone lesions were not biopsied routinely but were observed for bone pain and progression of growth. A rising AFP level alone was not taken to be confirmatory of tumor recurrence, but the date of recurrence was taken as the time that the AFP level began to rise once tumor recurrence had been confirmed.

Immunosuppression consisted of cyclosporine or tacrolimus and corticosteroids, with or without azathioprine and mycophenolate. In cases in which acute rejection was suspected, a liver biopsy was performed, and steroid pulse therapy was conducted after the rejection diagnosis was made. The steroids were withdrawn 3-6 mo after surgery to minimize the risk of tumor recurrence[8,11]. Lamivudine was administrated to hepatitis-B-surface-antigen-positive patients before and after surgery, and hepatitis B immune globulin was administered to HBV-DNA-positive patients before, during and after surgery.

The pathological data on HCC tumors and potential indicators are shown in Table 2. In general, OLT was offered when liver function was impaired, or when the HCC become unresectable. HCC was diagnosed before transplantation in 148 patients, and in two, we identified an incidental tumor during pathological examination of the explanted liver.

Numerous studies have shown that tumor size is an important prognostic factor for liver transplantation in patients with HCC[8,12,13]. Bismuth et al[12] have found that HCC patients with two or fewer tumors, each with a diameter ≤ 3 cm, had an 83% 3-year CSR and TFS following liver transplantation and hepatectomy. Roayaie et al[14] have reported that HCC patients with tumor diameters > 7 cm (12 cases) and 5-7 cm (32 cases) had 5-year tumor-free rates of 34% and 55%, respectively, following transplantation. Tumor diameter > 7 cm and the presence of vascular invasion were correlated with HCC recurrence. In this study, total tumor size was shown to influence prognosis in the univariate Cox regression model analysis, and was shown to be an independent prognostic factor in the multivariate analysis. Compared to largest tumor size, tumor number can better predict the OLT prognosis in HCC patients. Univariate Cox regression analysis showed that the 2-year CSR and TFS rates were 73.5% and 75.6%, respectively. These rates were significantly different compared to those in cases where total tumor size was > 9 cm. Tumor number and size are believed to have a combined effect on HCC recurrence probability, and this effect is taken into consideration during selection of HCC OLT recipients in many institutions[2,6]. The total tumor size in the present study also reflects a combined effect of tumor number and size.

Many other studies have shown that macrovascular invasion is a primary factor that influences prognosis after OLT in HCC patients[12,13,15-18]. Shetty et al[18] have concluded that macrovascular invasion and AFP levels were prognostic factors that influenced CSR and TFS. Moreover, microvascular invasion had no significant influence on prognosis. Bismuth et al[12] have reported that 10 of 60 (16.7%) HCC patients who underwent OLT had tumor thrombus in the main trunk of the portal vein, and had a 3-year survival rate of only 20%. Thus, they proposed that tumor thrombus in the main trunk of the portal vein was a major risk factor for OLT. Other studies have proposed that when HCC is accompanied by vascular invasion, tumor cells are more likely to be present in the circulation, rather than being restricted to the liver[19,20]. While circulating tumor cells may not develop into distant metastases, immunosuppressive treatment after OLT may increase the possibility of tumor recurrence. Currently, most transplantation centers advocate exclusion of HCC patients with tumor thrombus in the main trunk or right and left branches of the portal vein, for these reasons. In the present study, multivariate Cox regression analysis showed that macrovascular invasion was an independent risk factor that affected CSR and TFS. In the 52 cases with macrovascular invasion, the recurrence rate was as high as 71.2% during follow-up. The 1-year CSR was 53.5%, and TFS was 14.4%. The 2-year CSR and TFS were 34.2% and 12.9%, respectively. Therefore, OLT patients with macrovascular invasion had poor long-term prognosis.

Our data showed that age was related significantly to CSR by univariate Cox regression analysis, with a relative risk of 0.963 (95% CI: 0.936-0.991). The younger the onset of HCC, the greater the possibility of tumor recurrence was after liver transplantation. An early age of HCC onset may lead to greater malignancy and faster disease development. An understanding of this mechanism requires further exploration.

In the 1980s, the outcome of orthotopic liver transplantation (OLT) for hepatocellular carcinoma (HCC) was discouraging. After the Milan criteria (single tumor up to 5 cm, or up to three tumors up to 3 cm) were introduced by Mazzaferro et al in the early 1990s, recurrence rate fell to 8%, and tumor-free patient survival at 4 years was 83%. The Milan criteria have long been considered to be the classical criteria for selection of patients with HCC for liver transplantation. Recently, there have been numerous proposals for expanding the Milan criteria, such as the University of California, San Francisco (UCSF) criteria.

The Milan criteria have long been considered to be the classical criteria for selection of patients with HCC for liver transplantation. China has the greatest incidence of liver cancer worldwide. Each year, over half of liver cancer detections and deaths occur in China. A substantial proportion of adult Living donor liver transplantation patients not fulfilling the Milan or UCSF criteria have been found to survive longer than expected after transplantation. Therefore, it seems reasonable to attempt further reduction of unnecessary dropouts arising from the strict application of narrow selection criteria.

In the present study, the authors identified various clinicopathological risk factors for actuarial and recurrence-free survival of 165 patients with HCC who underwent OLT using the Kaplan-Meier method with the log-rank test. They found that macrovascular invasion and total tumor diameter, as assessed on explanted liver, were the strongest prognostic factors.

The authors reviewed their single-center experience with 148 OLTs for HCC and proposed a new prognostic score.