Perioperative glycemic control is important for reducing postoperative infectious complications. However, clinical trials have shown that efforts to maintain normoglycemia in intensive care unit patients result in deviation of glucose levels from the optimal range, and frequent attacks of hypoglycemia. Tight glycemic control is even more challenging in those undergoing pancreatic resection. Removal of lesions and surrounding normal pancreatic tissue often cause hormone deficiencies that lead to the destruction of glucose homeostasis, which is termed pancreatogenic diabetes. Pancreatogenic diabetes is characterized by the occurrence of hyperglycemia and iatrogenic severe hypoglycemia, which adversely effects patient recovery. Postoperatively, a variety of factors including surgical stress, inflammatory cytokines, sympathomimetic drug therapy, and aggressive nutritional support can also affect glycemic control. This review discusses the endocrine aspects of pancreatic resection and highlights postoperative glycemic control using a closed-loop system or artificial pancreas. In previous experiments, we have demonstrated the reliability of the artificial pancreas in dogs with total pancreatectomy, and its postoperative clinical use has been shown to be effective and safe, without the occurrence of hypoglycemic episodes, even in patients after total pancreatectomy. Considering the increasing requirement for tight perioperative glycemic control and the recognized risk of hypoglycemia, we propose the use of an artificial endocrine pancreas that is able to monitor continuously blood glucose concentrations with proven accuracy, and administer automatically substances to return blood glucose concentration to the optimal narrow range.

Figure 1 Pathophysiology of pancreatogenic diabetes according to published reports[10-14]. 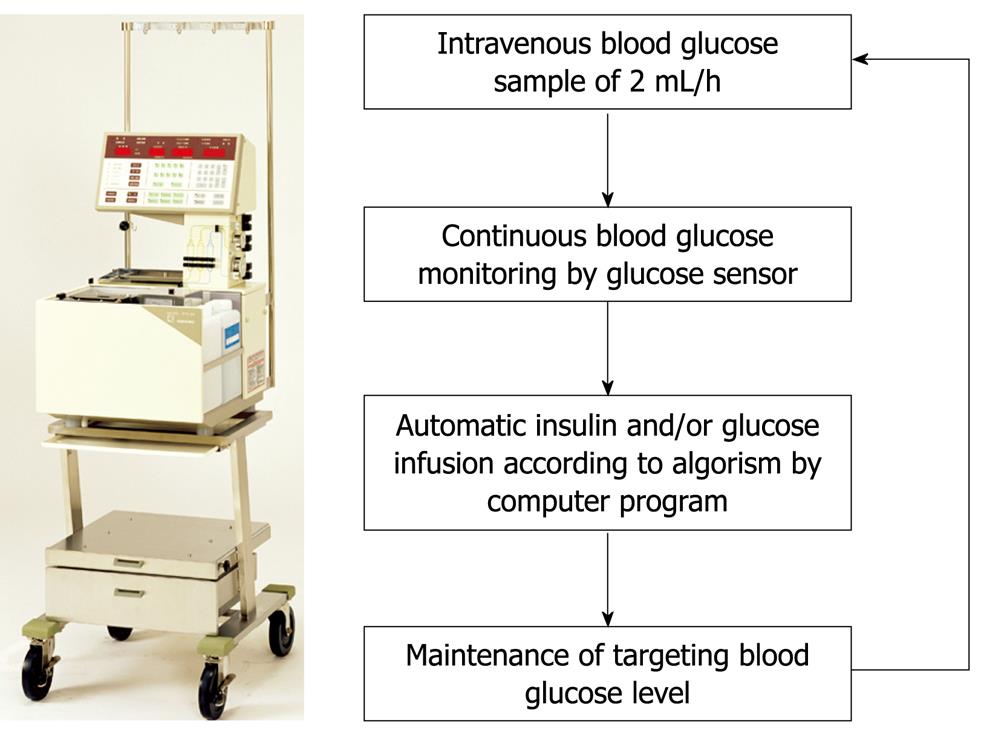 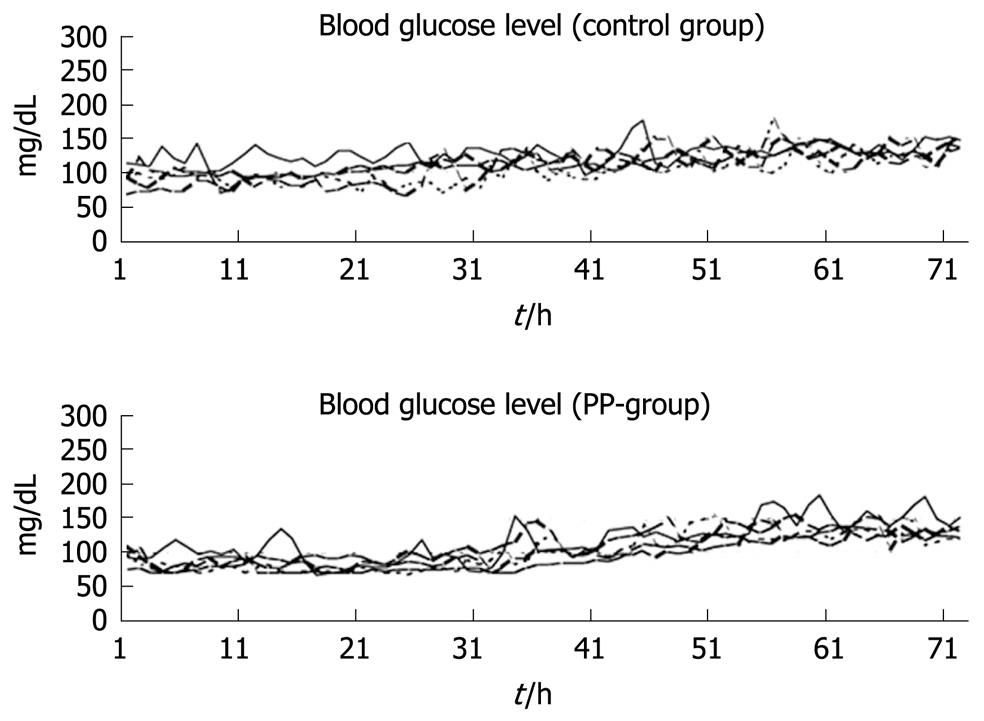 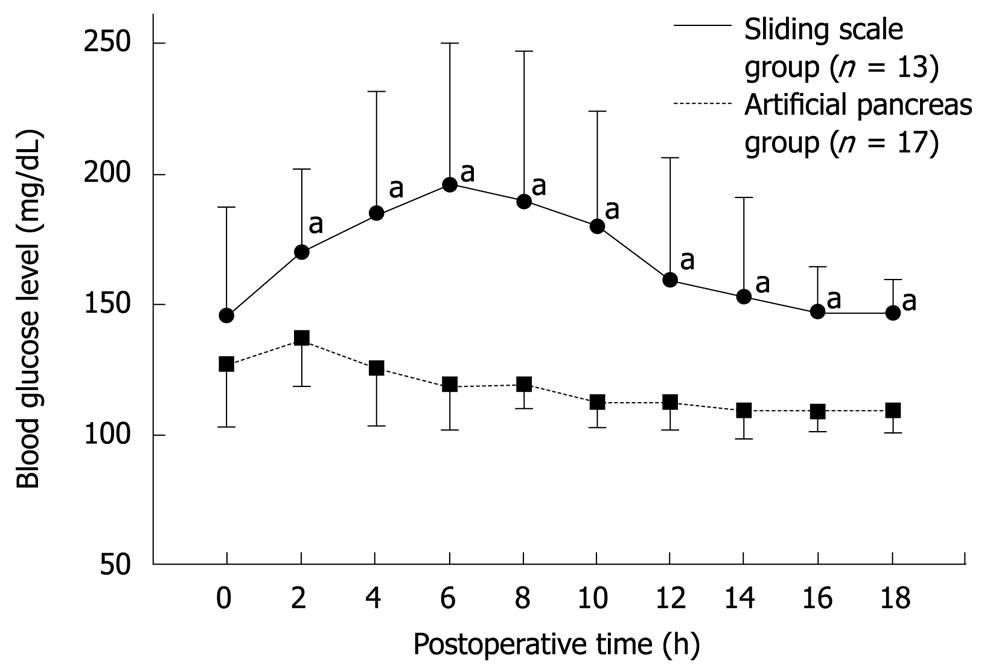 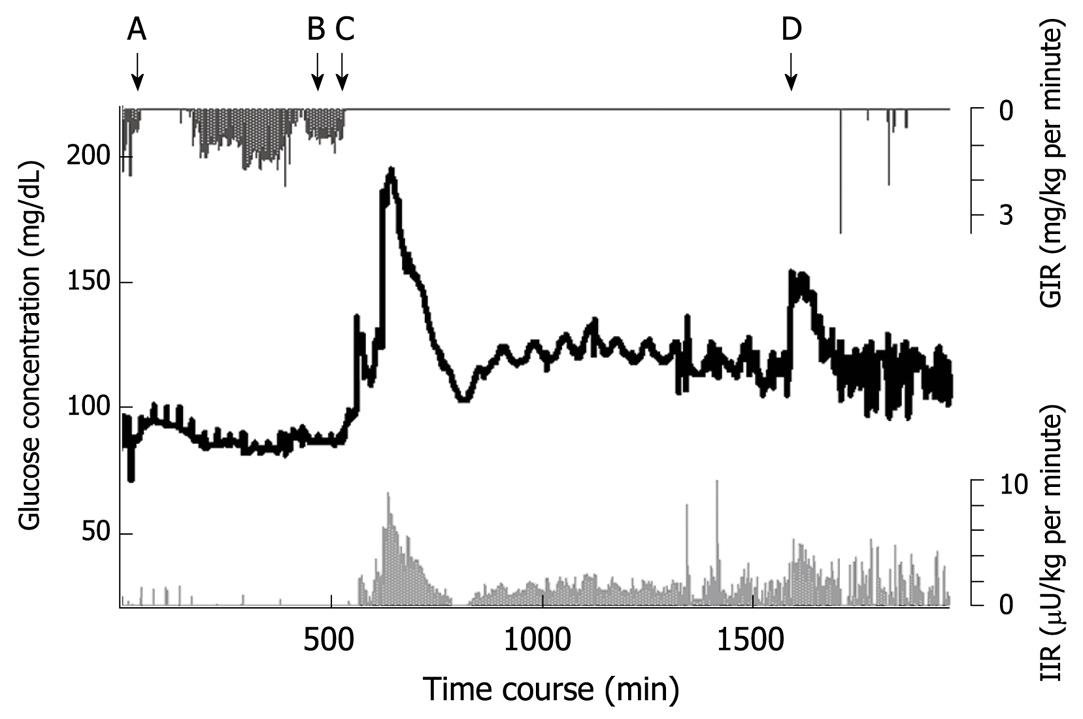 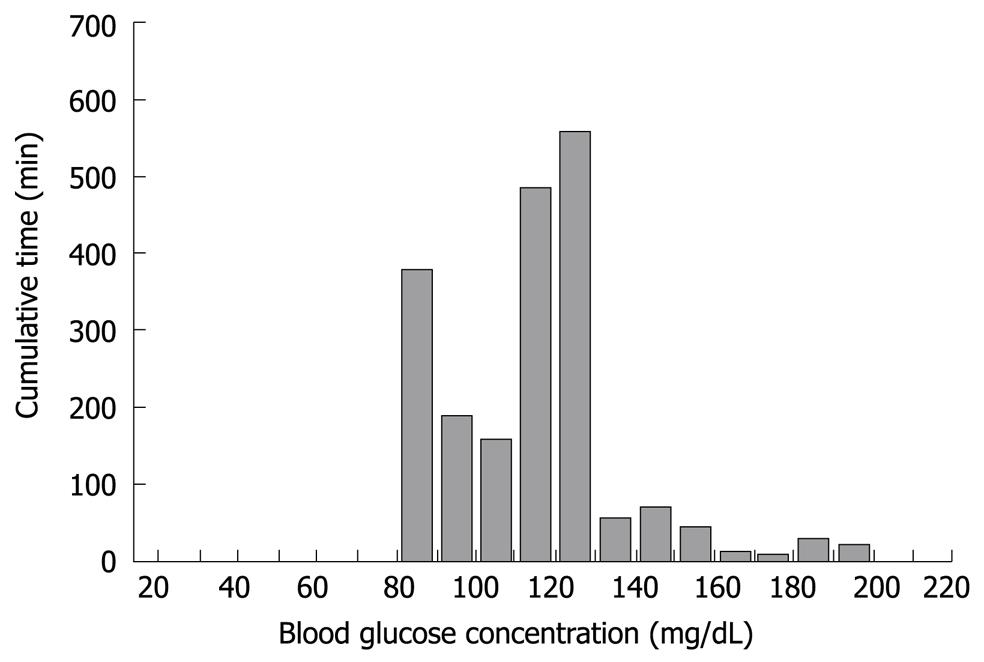 Figure 6 Histogram depicting the range and cumulative time for the blood glucose concentration of a middle-aged female who underwent total pancreatectomy.

Pancreatogenic diabetes is characterized by diabetes with frequent episodes of iatrogenic hypoglycemia and hyperglycemia[8], which is referred to as brittle diabetes (Figure 1). This is true particularly for patients after total or subtotal pancreatectomy. The condition is difficult to treat because of a paradoxical combination of enhanced peripheral insulin sensitivity and decreased hepatic insulin sensitivity, in addition to decreased glucagon secretion[8-12]. Patients become hyperglycemic because of unsuppressed hepatic glucose production, when insulin replacement is insufficient. In contrast, patients become hypoglycemic when insulin replacement is barely excessive, as a result of the enhanced peripheral insulin sensitivity and a deficiency of pancreatic glucagon secretion[10].

ACTIONS OF THE GLUCOREGULATORY HORMONES
Insulin

Insulin-secreting β cells are distributed evenly throughout the pancreas. Insulin decreases serum glucose concentration through suppressing hepatic glyconeogenesis, glycogenolysis and facilitating hepatic glycogen synthesis[1,2]. Insulin receptors are expressed on nearly every cell throughout the body and insulin decreases blood glucose concentration through facilitating glucose uptake into insulin-receptor-bearing cells[10]. In addition to the glucoregulatory effect, insulin also has an anti-inflammatory effect[15,16].

Glucagon-secreting α cells are located predominantly in the body and tail of the pancreas. Together with the β cells, the function of α cells is essential for maintaining the remarkable consistency of glucose levels under various states of supply and demand[17]. During fasting, glucagon is responsible for maintaining adequate glucose production in hepatocytes by stimulating glycogenolysis and gluconeogenesis. Thus, glucagon works as a counter-regulatory mechanism for hypoglycemia. Surgical resection that causes reduction of α cells may be associated with severe hypoglycemic episodes, especially after total or distal pancreatectomy.

Diabetes mellitus is a well-established risk factor for postoperative infectious complications[23-25], and much effort has focused on preoperative glycemic control. However, after van den Berghe et al[26] reported that tight glycemic control had a beneficial impact on the mortality rate of patients admitted to the intensive care unit (ICU), increased attention has been paid to postoperative glycemic control. Hyperglycemia itself, even in non-diabetic patients, has also been reported to be associated with an adverse outcome in surgical patients[27].

Despite this increasing attention to postoperative glycemic control, tight control of blood glucose levels is still not practiced widely, because of the difficulty of keeping glucose levels within the aimed-for range, and frequent occurrences of hypoglycemia[28,29]. Therefore, we recommend strongly the use of an artificial endocrine pancreas equipped with the ability to monitor accurately and control automatically blood glucose levels efficiently, safely and in a hands-free manner[22,30-34].

The initial aim of this experimental study was to investigate the effect of PP infusion on insulin requirements after total pancreatectomy in dogs[22]. However, the study also demonstrated clearly the usefulness and safety of the artificial pancreas in controlling blood glucose after total pancreatectomy[22]. We have used STG-22 (Nikkiso Co. Ltd., Tokyo, Japan) which is a bedside-type artificial endocrine pancreas[34]. The Nikkiso Company developed the STG-22 unit in 1984 as an artificial endocrine pancreas, which was only a single device with a closed-loop system (Figure 2). Peripheral venous blood for glucose monitoring was sampled continuously at 2 mL/h. STG-22 is capable of measuring continuously the blood glucose level with its glucose sensor, and automatically infuses insulin and/or glucose to adjust the blood glucose level in accordance with a target glucose value, which is the so called closed-loop system[34]. Ten dogs underwent total pancreatectomy. Following surgery, five dogs were supported solely by the artificial pancreas for 72 h, while the other five were supported by the artificial pancreas plus an infusion of bovine PP at 2 pmol/kg per minute. Mean blood glucose levels and insulin requirements were compared between the two groups. In all 10 dogs, the blood glucose concentration was controlled tightly at a mean level of 110 ± 4 mg/dL, and there was no difference in mean blood glucose level between the two groups (Figure 3). The insulin requirement in the group treated with PP was 90.0 ± 20.8 mU/kg for the first day and 562.7 ± 126.5 mU/kg for the second day. This requirement was significantly less than that of the group without PP: 445.0 ± 151.9 mU/kg for the first day and 1007.7 ± 144.9 mU/kg for the second day. During the operation of the artificial pancreas, there were no serious complications, such as catheter thrombosis, migration, infection, or episodes of hypo/hyperglycemia.

In the sliding scale group, postoperative blood glucose levels rose steadily, and reached a maximum value of approximately 200 mg/dL between 4 and 6 h after pancreatectomy. In the artificial pancreas group, blood glucose levels decreased gradually, and reached the target range (80-110 mg/dL) by 6 h postoperatively (Figure 4). Total insulin administered per patient during the first 18 h after surgery was significantly higher in the artificial pancreas group (107 ± 109 IU) compared to the sliding scale group (8 ± 6 IU; P < 0.01). No hypoglycemia was recorded in either group. This study demonstrated the usefulness of the artificial pancreas for the first time in a clinical setting, using a number of cases and a prospective design.

Total pancreatectomy results in an extreme form of pancreatogenic diabetes. The blood glucose concentration goes up and down within a short duration, and iatrogenic hypoglycemia frequently affects prognosis. The patient described here was a middle-aged woman who underwent total pancreatectomy, and during the acute postoperative phase, received catecholamines to maintain blood pressure, and nutritional support of 25 kcal/kg per day soon after transfer from the operating theatre to the ICU.

Her blood glucose concentration profile is shown in Figure 5. An artificial pancreas (STG-22) was operated for 1994 min, automatic and manual calibration was performed seven times, and each calibration took approximately 8 min. Failure of blood withdrawal occurred seven times, which was a total of 20 min (data during calibration and failure of blood withdrawal was eliminated from the data analysis). Blood sample failures were resolved easily by trained ICU nurses.

Recently, the Normoglycemia in Intensive Care Evaluation-Survival Using Glucose Algorithm Regulation (NICE-SUGAR) study has reported that glycemic control for critically ill patients in the ICU results in beneficial effects on survival when the blood glucose concentration is targeted at ≤ 180 mg/dL[37]. However, when limited to the surgical ICU setting, tight glycemic control also provides benefits for postoperative patients, according to a recent meta-analysis which included the results of the NICE-SUGAR study[38]. In light of current knowledge, a prospective randomized control trial using the artificial endocrine pancreas is needed urgently to compare different ranges of blood glucose concentrations after major surgery. Such a study would ascertain the optimal range for blood glucose concentrations without hypoglycemia, which presumably weakens the potency of tight glycemic control.

In the future, along with efforts to reduce postoperative complications after pancreatectomy by improving surgical methods, drainage and patient selection, glycemic control should receive more attention, especially during the early postoperative period. Undoubtedly, it is very important to find out the optimal range for blood glucose levels and the optimal caloric intake shortly after pancreatectomy, and develop more sophisticated mechanical devices to control blood glucose.

Pancreatectomy often results in pancreatogenic diabetes for which insulin treatment is known to be difficult. To reduce the postoperative infectious complications related to hyperglycemia and iatrogenic hypoglycemia caused by conventional blood glucose control, perioperative use of an artificial pancreas is recommended as an ideal method for tight glycemic control after pancreatic surgery. The operation of an artificial endocrine pancreas is still somewhat resource-intensive and expensive, but if mortality and morbidity are reduced, it is worthwhile.