A diagnosis of primary aortoenteric fistula is difficult to make despite a high level of clinical suspicion. It should be considered in any elderly patient who presents with upper gastrointestinal bleeding in the context of a known abdominal aortic aneurysm. We present the case of young man with no history of abdominal aortic aneurysm who presented with massive upper gastrointestinal bleeding. Initial misdiagnosis led to a delay in treatment and the patient succumbing to the illness. This case is unique in that the fistula formed as a result of complex atherosclerotic disease of the abdominal aorta, and not from an aneurysm.

A 49-year-old man was admitted to the emergency room with clinical signs of gastrointestinal bleeding (massive hematemesis, tachycardia of 140 bpm, and blood pressure of 70/40 mmHg). His hemoglobin was 5.5 g/dL. The patient was resuscitated with intravenous fluids and transfusion of 4 U of packed red blood cells. His medical history included multiple sclerosis with minimal neurological deficit, which was treated with Copaxone and Novitropan. He had had no previous surgery or peptic ulcer disease.

An initial evaluation with upper endoscopy and colonoscopy presented as normal. Twenty-four hours later, the patient had recurrent bleeding and required a transfusion of an additional 2 U of packed red blood cells. Repeated upper endoscopy showed blood in the stomach and duodenum, but no source of bleeding could be found. The patient was taken to the angiography suite, where flash aortography and visceral angiography showed no active extravasation of contrast material.

The left gastric artery was embolized empirically with fibered platinum coils, which was tolerated well by the patient. Blood pressure began to normalize immediately after embolization, and the patient’s condition stabilized. To evaluate the source of bleeding, he underwent CT examination and capsule endoscopy, which appeared to be normal.

Technetium-99m-red blood cell scintigraphy was used to identify the site of bleeding during the next short episode of hematochezia, but it was inconclusive for bleeding. On a subsequent occasion, the patient displayed an episode of fresh blood in a nasogastric tube. Upper endoscopy (session four) revealed multiple gastric erosions. The patient became unstable with clinical signs of ongoing bleeding. Exploratory laparotomy and gastrotomy were performed with undersuturing of acute gastric ulcers (most were located in the fundus). Intraoperative endoscopy showed no other site of bleeding throughout the stomach, duodenum and 1.5 m of proximal small intestine. Twenty-four hours perioperatively, the patient received 10 red packed cells and other blood supplements and high-dose omeprazole (Omeprazole infusion of 8 mg/h for 72 h, following 40 mg of omeprazole orally per day). The recovery was uneventful and 8 d after surgery, the patient was observed in the regular ward.

Ten days postoperatively, the patient had another episode of bleeding accompanied by syncope with hematochezia and hematemesis. Since he had been receiving fluid resuscitation, blood pressure was undetectable. The patient underwent full cardiopulmonary resuscitation (CPR) and was sent to the operating theater. Repeated angiography and CT revealed an aortoduodenal fistula that had not been detected 3 wk previously (Figure 1).

Figure 1 CT and lateral aortography. A: CT showing direct extravasation of contrast material from the aorta into the duodenal lumen (arrow); B: Lateral aortography showing aortoduodenal fistula. Note there is no evidence of abdominal aneurysm.

Exploratory laparotomy was performed and the aortoduodenal fistula was found between the anterior wall of the aorta and the third part of the duodenum. The bowel was full of fresh blood. The fistula was disconnected and a Foley catheter was inserted into the aorta to control the bleeding (Figure 2). This occurred whilst the patient was in prolonged CPR, with a clamp on the descending aorta through left thoracotomy. After 2 h resuscitation in the operating theater, the patient developed disseminated intravascular coagulation and developed bradycardia and acidosis. His blood pressure and urine output dropped drastically and he died on the operating table from irreversible hemorrhagic shock. 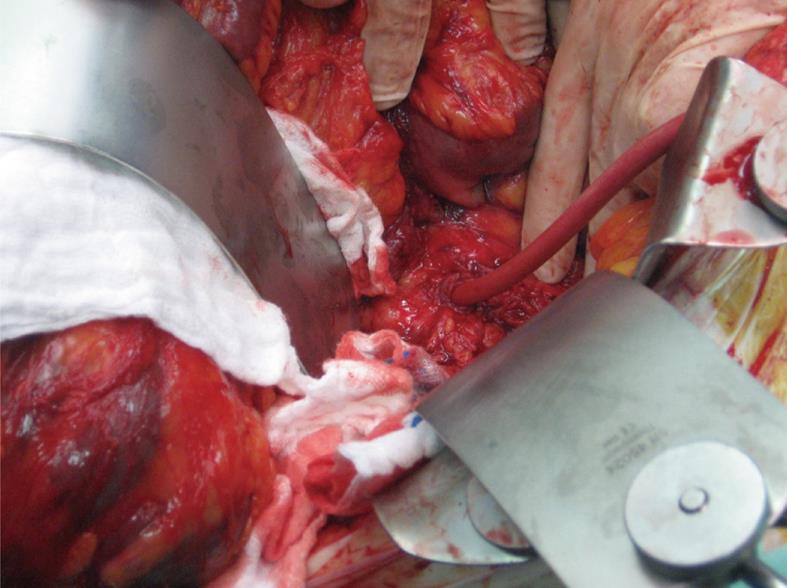 Figure 2 Perioperative findings of primary fistula between the third part of the duodenum and aorta. A Foley catheter was inserted to control the bleeding.

The diagnosis and treatment of aortoenteric fistulas are difficult. Nevertheless, in a patient with hematemesis and melena who has undergone an aortobifemoral bypass or aortic interposition grafting without esophagogastroduodenal pathology, a diagnosis of aortoenteric fistula should not be overlooked[1]. Primary aortoduodenal fistulas are nearly always associated with abdominal aortic aneurysm, mostly atherosclerotic. In the present clinical case, the available clinical, instrumental and radiological supports made such a diagnosis feasible.

The penetrating aortic ulcer has been recognized recently as an independent pathological entity. It may penetrate through the aortic wall, which leads to fistulas into adjacent organs. Certik et al[2] have reported the case of a 78-year-old woman who was admitted to hospital with massive gastrointestinal hemorrhage. Endoscopy did not reveal the cause of hemorrhage. The diagnosis was made by CT that showed a primary aortoduodenal fistula without aortic aneurysm, and the patient underwent a successful operated. During urgent surgery, the penetrating atherosclerotic ulcer was found to be the cause of the aortoduodenal communication.

The classic presentation of an aortoduodenal fistula is that of a "herald bleed" (brief, with spontaneous resolution), followed anywhere from hours to weeks later by a massive upper gastrointestinal bleed. A high index of suspicion and rapid diagnosis is imperative as exsanguinating hemorrhage may occur. An aortoduodenal fistula or erosion is rarely seen endoscopically[3]. Endoscopy may disclose another cause of bleeding, as was discovered in our patient. Therefore, normal findings, a positive finding of gastritis or ulcers without active bleeding do not rule out aortoduodenal fistula. Careful inspection of the distal duodenum should be performed in the setting of unexplained torrential bleeding. More commonly, fresh blood or clots may be found in the third portion of the duodenum.

CT with contrast is the most suitable diagnostic test and provides a reported detection rate of 30%-61%[4–6]. CT may show the abnormal communication between the aorta and the intestine. Angiography is seldom a helpful procedure, unless a pseudoaneurysm is seen[7], and the diagnosis is usually made or confirmed by laparotomy. Surgical repair is the only therapeutic option.

In summary, a diagnosis of primary aortoenteric fistula should be considered in any patient known to have abdominal aortic aneurysm or lower abdominal pain associated with midline mass and upper gastrointestinal bleeding of unexplained etiology. A herald bleed is an indication for prompt intervention. Endoscopy is the first step in diagnosis, and CT may be used for confirmation. An emergency exploratory laparotomy should be performed as soon as the diagnosis is considered.