AIM: To characterize the types of mutations present in the 23S rRNA genes of Malaysian isolates of clarithromycin-resistant Helicobacter pylori (H pylori).

METHODS: Clarithromycin susceptibility of H pylori isolates was determined by E test. Analyses for point mutations in the domain V of 23S rRNA genes in clarithromycin-resistant and -sensitive strains were performed by sequence analysis of amplified polymerase chain reaction products. Restriction fragment length polymorphism was performed using BsaI and MboII enzymes to detect restriction sites that correspond to the mutations in the clarithromycin-resistant strains.

RESULTS: Of 187 isolates from 120 patients, four were resistant to clarithromycin, while 183 were sensitive. The MIC of the resistant strains ranged from 1.5 to 24 &mgrg/mL. Two isolates had an A2142G mutation and another two had A2143G mutations. A T2182C mutation was detected in two out of four clarithromycin-resistant isolates and in 13 of 14 clarithromycin-sensitive isolates. Restriction enzyme analyses with BsaI and MboII were able to detect the mutations.

CONCLUSION: Clarithromycin resistance is an uncommon occurrence among Malaysian isolates of H pylori strains and the mutations A2142G and A2143G detected were associated with low-level resistance.

Helicobacter pylori (H pylori) is a microaerophilic, Gram-negative bacterium, and is implicated often as the causative agent of chronic gastritis, duodenal and gastric ulcers, and gastric carcinoma[12]. H pylori-associated disorders usually regress or heal completely after treatment with antibiotics[3]. Clarithromycin is a macrolide that has been used frequently in combination with other antimicrobial agents for the treatment of H pylori infection[4–6]. However, resistance to clarithromycin has become one of the major reasons for treatment failure[7]. The prevalence of H pylori resistance to clarithromycin varies among different countries, such as 12% in Japan, 1.7%-23.4% in Europe and 10.6%-25% in North America[89].

Clarithromycin acts by binding to the peptidyl transferase region of 23S rRNA and inhibits bacterial protein synthesis. Resistance to clarithromycin results from structural changes in the 23S rRNA molecule caused by mutation of the 23S rRNA gene[1011]. Adenine to guanine transitions at positions 2142 and 2143 are the main 23S rRNA mutations in clarithromycin-resistant isolates[12–14]. All these mutations have been shown to confer resistance to this macrolide by mutagenesis study[15]. Other mutations that have been observed in clarithromycin-resistant H pylori isolates are A2515G and T2717C, A2116G, G2141A, A2144T, T2182C, G2224A, C2245T, and T2289C[16]. The A2142C/G and A2143G mutation also generate specific restriction sites, namely MboII and BsaI, and these may be used for the rapid screening of clarithromycin resistance.

In the present study, we determined the prevalence of clarithromycin resistance in our local H pylori strains and characterized the types of mutations that occurred in the resistant strains. In addition, we determined whether the Restriction fragment length polymorphism (RFLP) technique was suitable for rapid detection of the mutations among our local isolates.

The patients enrolled in this study were the patients who underwent endoscopy for gastrointestinal symptoms at the Gastroenterology Unit, National University of Malaysia Hospital between 2005 and 2007. Written informed consent was obtained from all patients before biopsies were taken from the antrum and corpus of each patient.

Biopsy samples were cultured on Columbia agar supplemented with 10% ox blood. Plates were incubated at 37°C under microaerophilic condition for 5-7 d. Bacterial isolates were identified according to colony morphology, Gram-staining, urease, catalase and oxidase. The cultures were stored at -80°C in Brucella broth supplemented with 15% glycerol and fetal calf serum (Invitrogen, USA).

The MIC of clarithromycin was determined by the E-test method. E tests (AB Biodisk, Sweden) were performed on Columbia agar supplemented with 10% ox blood. The plates were incubated under microaerophilic condition for 3-5 d. Isolates were classified as clarithromycin-resistant if MIC was > 1 &mgrg/mL. H pylori strain ATCC43504 was included as a control clarithromycin-sensitive strain.

DNA extraction was carried out using the Nucleospin® Tissue Kit (Macherey-Nagel, BD Biosciences, USA) and stored at -20°C until use. The primers used for PCR amplification were Hp5 forward, 5'-GTCGTGCCAAGAAAAGCGTCT-3' (positions 1672-1693; GenBank accession number U27270), and Hp2 reverse, 5'-TGTGTGCTACCCAGCGATGCTC-3' (positions 2811-2790; GenBank accession number U27270). PCR was carried out on 10 mmol/L dNTP (Promega, USA), 10 pmol of each primer, 1.25 U Taq DNA polymerase (Promega), and genomic DNA of H pylori. The PCR was performed in a GeneAmp PCR System 2400 thermal cycler (Perkin Elmer, USA) for 30 cycles with the following cycling conditions: 94°C for 1 min, 58°C for 30 s and 72°C for 30 s. The PCR products were then analyzed by electrophoresis using 1% agarose and stained with ethidium bromide.

Sequence analysis of restriction sites of the amplified V domain of the 23S rRNA gene of the resistant strains showed restriction sites that could be digested with BsaI and MboII. Digestion of the amplified PCR product with MboII produced two fragments of 662 and 476 bp sizes in strains with the A2142G mutation. No fragment was produced with the A2143G or T2182C mutation (Figure 1). Resistant isolates with the A2143G mutation produced three fragments of 662, 476 and 60 bp when digested with BsaI. No restriction fragment was produced in strains with A2142G and T2182C mutations (Figure 2). None of the clarithromycin-sensitive isolates and the negative control (ATCC43504) produced restriction fragments when digested with MboII and BsaI, which indicated the absence of A2142G and A2143G mutations. 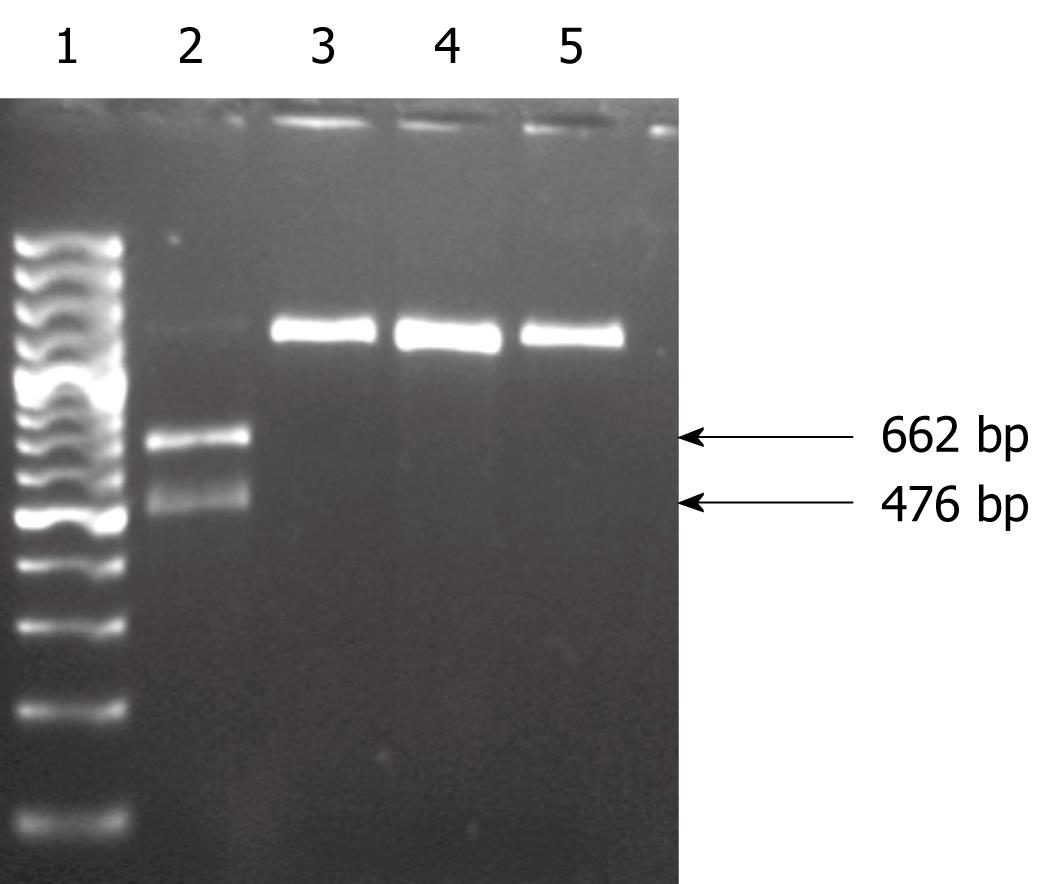 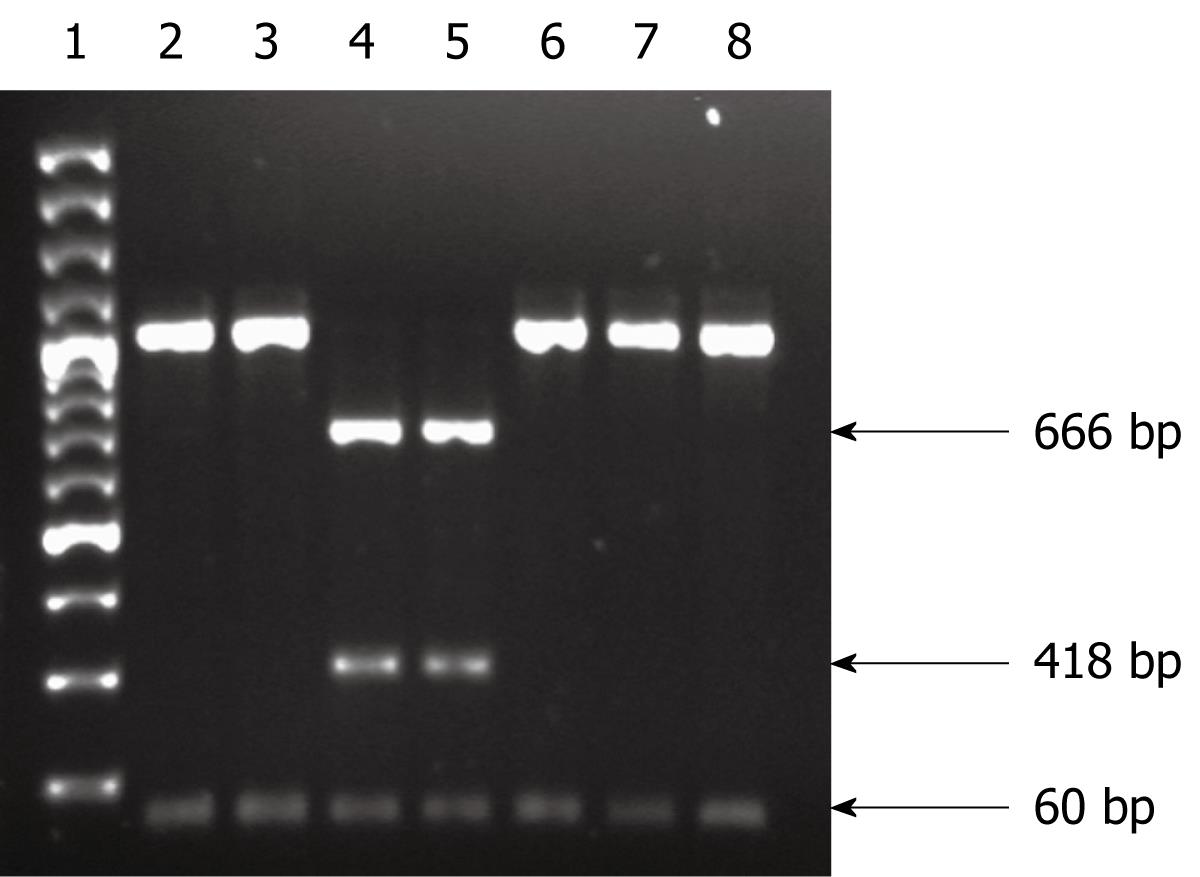 The prevalence of clarithromycin resistance was found to be low among the isolates in the present study. To the best of our knowledge, this was the first study that reported and characterized clarithromycin-resistant strains in Malaysia.

Another type of mutation detected in our isolates was T2182C. This mutation was detected in most of the strains studied, which suggests a common occurrence among our local strains. This mutation is not new and has been described in previous reports[1920]. This mutation is not associated with clarithromycin resistance[21]. However, it has not been discussed whether this type of mutation occurs commonly in H pylori. Mutations other than A2142G and A2143G have been reported in other studies[1622], but among our strains, sequence analysis showed that the mutations were limited to these types only. Although the low number of resistant isolates in our study limit the scope of detection, the results suggest that clarithromycin resistance of H pylori in Malaysia can be predicted by detection of mutations at positions 2142 and 2143 of the 23S rRNA gene. The resistance to clarithromycin among the four patients is considered primary resistance because they were never treated previously for H pylori eradication.

Knowledge about the molecular mechanism of resistance is important as it can be used to facilitate the development of other molecular methods to detect resistance. It has been shown that PCR-RFLP can be used to detect mutations in clarithromycin-resistant isolates[2324]. Using this technique in our study, it was demonstrated that only strains with the A2142G and A2143G mutations produced restriction fragments when digested with MboII or BsaI. This alleviated the need to use the more expensive and time-consuming processes of sequencing and analysis to look for mutation sites.

The incidence of clarithromycin-resistant Helicobacter is increasing worldwide. This limits the therapeutic options available for eradicating the bacterium. Clarithromycin resistance has been attributed to mutations in the 23S rRNA gene.

Clarithromycin acts by binding to the peptidyl transferase region of 23S rRNA and inhibits bacterial protein synthesis. There are many types of mutations observed in the 23S rRNA genes of clarithromycin-resistant Helicobacter pylori (H pylori). There is little information on the prevalence and characteristics of clarithromycin resistance in H pylori strains isolated from Malaysian patients. In the present study, the authors determined the prevalence of resistance and characterized the types of mutations present in their resistant strains.

The A2142G and 2143G mutations in the 23S rRNA genes in H pylori can be detected easily by restriction fragment length polymorphism (RFLP) analysis of the polymerase chain reaction (PCR) product of the genes, using MboII or BsaI. This eliminates the need to detect these mutations by sequencing.

This is a straightforward study that determined the prevalence of clarithromycin resistance in H pylori strains isolated from the authors¡¯ institute in Malaysia. The types of mutations that occurred in the resistant strains were further characterized by PCR and sequencing. Finally, the authors evaluated whether the RFLP technique was suitable for rapid detection of the mutations among these isolates. Although the sample size of clarithromycin-resistant isolates was relatively small, the techniques and methodology used were appropriate and standard. The information is potentially useful for the clinical management of H pylori infection in Malaysia, and also for our overall appreciation of the global distribution and prevalence of antibiotic resistance of this important pathogen.

A grant from the Ministry of Science, Technology and Innovation, Malaysia