METHODS: Immunohistochemistry was used to detect the expression of Bmi-1 and ki-67. Double-labeling staining was used to display the distribution of Bcl-2+/ki-67- cells in 162 cases of GC and its matched normal mucosa and precancerous lesion.

CONCLUSION: Abnormal Bmi-1 expression in GC may be involved in cell proliferation, apoptosis and cancerization. This marker can objectively indicate the clinicopathological characteristics of GC.

B-cell-specific Moloney murine leukemia virus insertion site 1 (Bmi-1) is a transcriptional repressor belonging to the polycomb group gene family[1], which is a potent negative regulator of the Ink4a/Arf locus. Bmi-1 regulates cell proliferation and apoptosis and is over-expressed in several human tumors[23]. Reinisch et al[4] reported that Bmi-1 protein is expressed in stem cells, specialized cells and tumors of the gastrointestinal tract. In the present study, the expressions of Bmi-1, ki-67 and Bcl-2 were detected immunohistochemically. The distribution of Bcl-2+/ki-67- cells was observed in gastric carcinoma (GC) and its matched normal mucosa as well as precancerous lesion. The relation between Bmi-1 expression and clinicopathological features of GC was explored.

Expression of Bmi-1 and ki-67 in the specimens was detected using the PV-9000 kit (Beijing Zhongshan Goldenbridge Biotechnology Company) following its manufacturer’s instructions. The working anti-human rabbit Bmi-1 polyclonal antibody (Abcam, USA) was diluted at 1:80. Anti-human mouse monoclonal antibodies ki-67 and Bcl-2 (ready to use) and double-labeling staining kit were purchased from Fuzhou Maixin Company (China). Immunohistochemical double-labeling staining was used to display the distribution of Bcl-2+/ki-67- cells. Antigens were retrieved after they were placed in a pressure cooker at a full pressure for 160 s in citrate buffer (pH 6.0). All procedures were implemented according to their manufacturer’s instructions, respectively. For negative controls, sections were processed as above but treated with 0.01 mol/L phosphate-buffered saline instead of primary antibodies.

Two hundred cells from two selected representative fields of each section were counted by two independent observers for the determination of their immunostaining intensity. Staining intensity was classified as 0 (negative), 1 (weak), 2 (moderate), and 3 (strong). Half of the positive cells were quantified as a percentage of the total number of the same kind of cells counted in two high-power fields (× 400), and defined as 0: < 5%, 1: 5%-25%, 2: 26%-50%, 3: 51%-75% and 4: > 75%. Immunostaining intensity was divided into 0: negative (-), 1-4: weakly positive (+), 5-8: moderately positive (++), and 9-12: strongly positive (+++). A 5-bromo-4-chloro-3-indolyl-phosphate/nitro-blue tetrazolium (BCIP/NBT) and 3-amino-9-ethylcarbozole (AEC) double staining system was used to display Bcl-2+/ki-67- cells. Red fine granules in cytoplasm with unstained nuclei in the same cells were defined as Bcl-2+/ki-67- cells. Photoes were taken with a digital camera (Olympus AX70, Japan).

RESULTS
Bmi-1 expression in normal gastric mucosa, GC and precancerous lesion, and its relation with GC 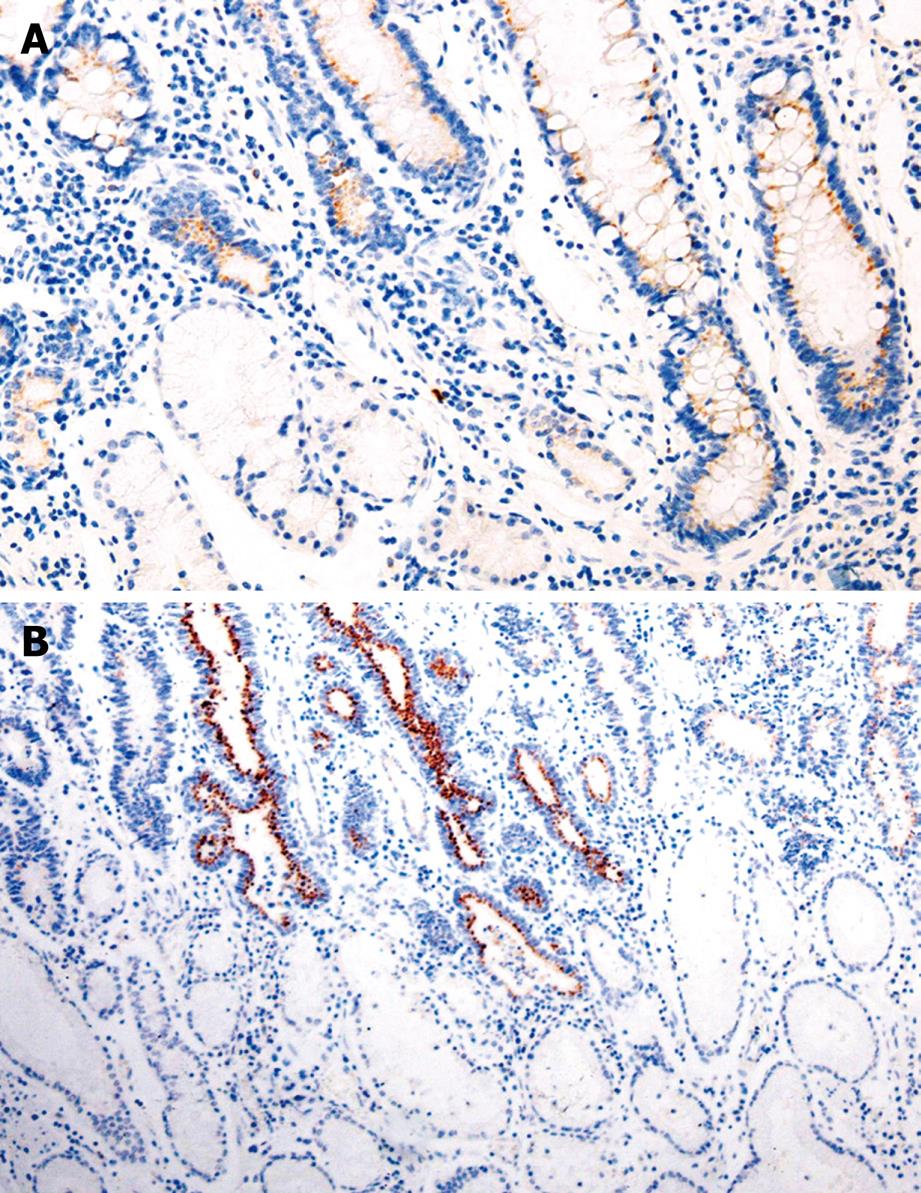 Expression of ki-67 and distribution of Bcl-2+/ki-67- cells in normal gastric mucosa, GC and precancerous lesion

The immunoreactivity to Bcl-2 and ki-67 was located both in the cytoplasm (red fine granules) and in nuclei (dark blue fine granules), respectively. Most Bcl-2+/ki-67- cells were distributed in the proliferating zone of gastric mucosa. The expression of ki-67 and Bcl-2 was correlated to the Borrmann’s and Lauren’s classification (χ2 = 13.380 and 5.552, P < 0.05, Table 3).

Relation between expressions of Bmi-1, ki-67 and Bcl-2 in GC and IM 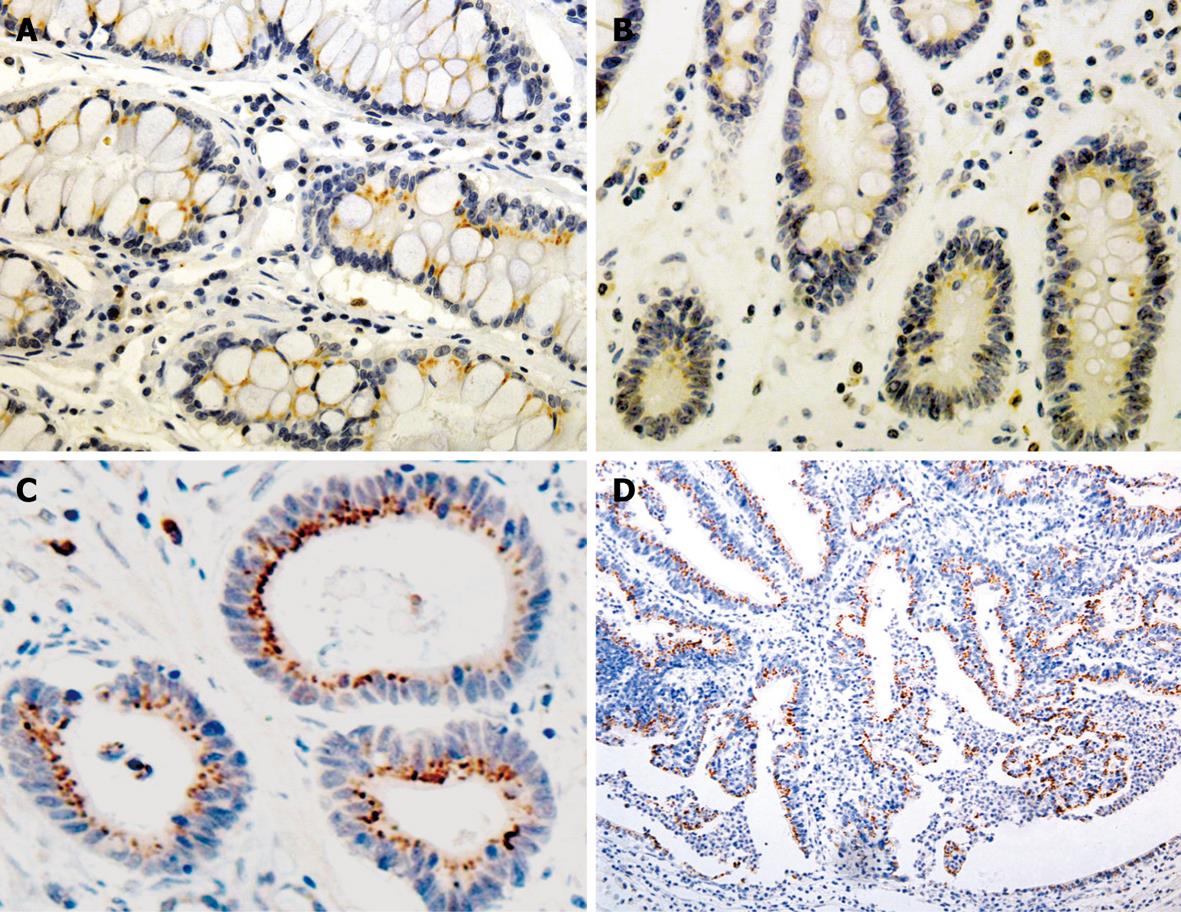 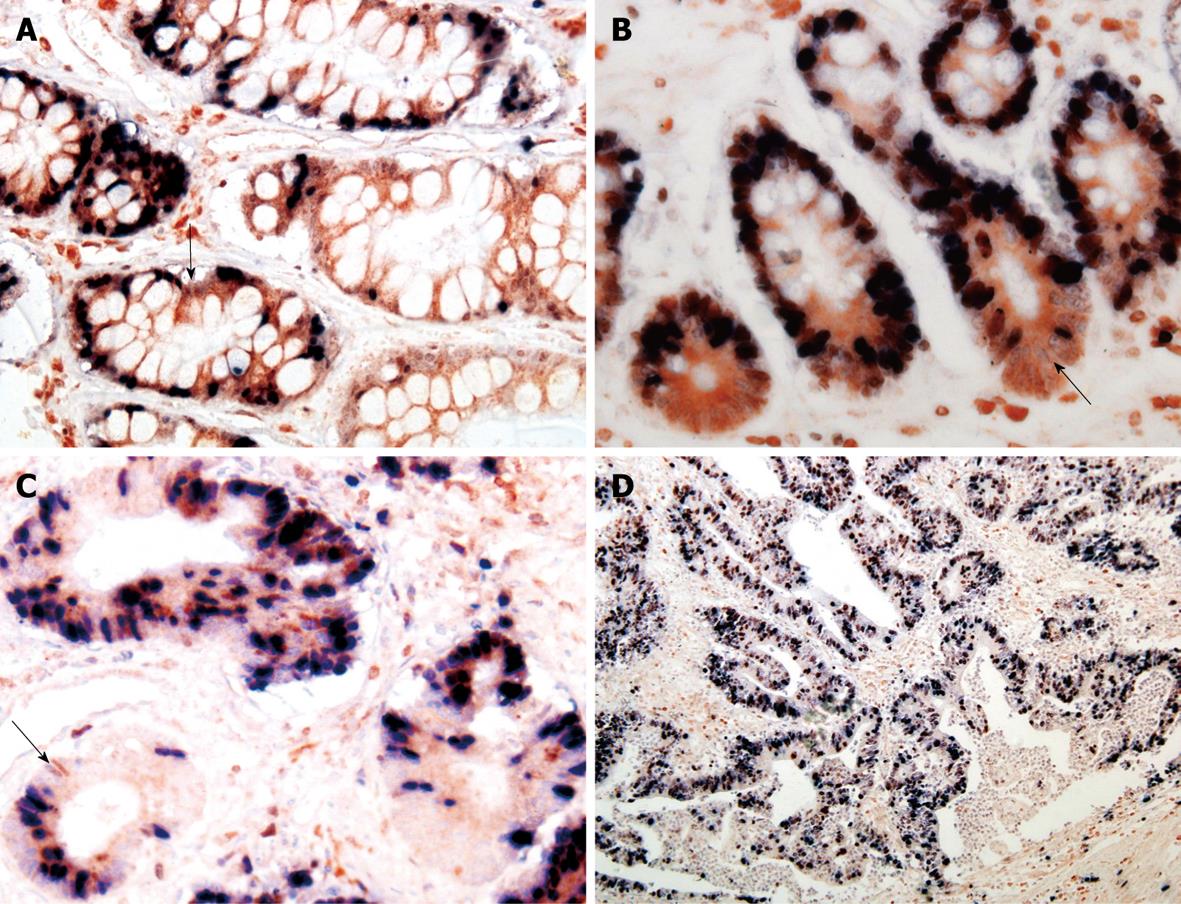 The Bmi-1 proto-oncogene is a transcriptional repressor, which can be discovered by retroviral insertion mutagenesis when transgenic mice are infected with Moloney murine leukemia virus[1]. It has been shown that Bmi-1 plays an important role in sustaining self-renewal of cell activity by repressing the INK4A locus that encodes p16INK4A and p19ARF in humans[5]. P16INK4A and p19ARF are capable of inducing growth arrest, cellular senescence and apoptosis. Several studies suggested that the pro-survival and pro-proliferation actions of Bmi-1 may be related to its ability to suppress the expression of proteins that regulate cell cycle progression. For example, in some cell types, when Bmi-1 is absent, the levels of p16INK4A and p19ARF increase[6]. Our study showed that the expression rate of Bmi-1 was 52.5%, 79.3%, and 80.8%, respectively, in GC, IM, and DYS, which was significantly higher than that (21.6%) in normal gastric mucosa (P < 0.05), indicating that Bmi-1 expression is involved in the mechanism that determines malignant potential[6], and may play a role in the occurrence and development of GC. In the absence of Bmi-1, p16INK4A may be up-regulated, leading to cell cycle arrest, senescence or apoptosis. In contrast, deregulation of INK4a allows cell cycle progression. p19ARF prevents the degradation of p53 by sequestering the p53-inhibitor MDM2, thereby allowing p53-mediated cell cycle arrest and apoptosis[7]. Since INK4a-ARF is the critical downstream target of Bmi-1 in the regulation of cell proliferation and apoptosis[7], and the stability of cells is impaired, cancerization may be increased. In this study, Bmi-1 expression was significantly higher in gastric precancerous lesion than in normal gastric mucosa, indicating that Bmi-1 plays a role in the malignant transformation of gastric mucosa cells[6].

In the present study, over-expression of Bmi-1 occurred in high-grade intraepithelial dysplasia and colon cancerous cells, which is consistent with the reported findings[6]. This study also showed that the expression of Bmi-1 was related to the Lauren’s and Borrmann’s classification and the clinicopathological tumor stage, suggesting that Bmi-1 may be related to cell differentiation in the progression of gastric mucosa injury to cancerization. Therefore, Bmi-1 may underlie the tumorigenesis and infiltration of GC. Variation of Bmi-1 expression in intestinal and diffuse GC indicates that Bmi-1 may be related to cell differentiation, which is consistent with the over-expression of Bmi-1 in gastric IM. Liu et al[8] reported that Bmi-1 is up-regulated at both transcriptional and translational levels in GC tissues compared with that in its adjacent non-cancerous tissues, as confirmed by reverse transcription polymerase chain reaction and Western blotting, showing that Bmi-1 can serve as a valuable marker for the diagnosis and prognosis of GC.

Ki-67 is a nuclear antigen expressed in proliferating but not in quiescent cells. Consequently, ki-67 is used in tumor pathology to detect proliferating cells in neoplastic diseases. Bcl-2, known as a key regulator of the apoptosis, is a proto-oncogene first discovered in human follicular lymphoma and is involved in the inhibition of apoptosis and the survival of a variety of cell types. The distribution of Bcl-2+/ki-67- cells in gastric pyloric glands and intestine crypts might be potential cell compartments involved in cancerization of the gastrointestinal tract. In our study, Bcl-2+/ki-67- were used as potential markers for gastric stem cells, immunohistochemical double-labeling staining was used to display the distribution of Bcl-2+/ki-67- cells in GC and precancerous lesions, which showed that the distribution of Bmi-1+ cells was consistent with that of Bcl-2+/ki-67- cells, and that Bmi-1 expression in IM was positively correlated with that of Bcl-2, suggesting that the expression of Bmi-1 is closely related with gastric cancer cellular proliferation and apoptotic progression of gastric carcinogenesis.

Lessard et al[9] reported that Bmi-1 has an essential role in regulating the proliferative activity of both normal and leukemic stem cells. It has been shown that Bmi-1 is a key regulator of self-renewal in both normal and tumorigenic human solid tumor stem cells, including several types of brain cancer[10] and breast carcinoma[11]. Dovey et al[12] showed that Bmi-1 is over-expressed in numerous epithelial tumors and plays a key role in lung adenocarcinoma, thus providing a clue to lung cancer cell origin and lung tumorigenesis. Thus far, the relation between Bmi-1 and stem cells of gastrointestinal tract still remains unclear. Reinisch et al[4] reported that Bmi-1 expression serves as a potential stem cell marker of the gastrointestinal tract, which also shows that Bmi-1 expression is correlated with gastrointestinal stem cells as well as numerous specialized cell types. These results indicate that Bmi-1 protein is involved in cellular differentiation in addition to maintaining stem cells, which is consistent with the research of Molofsky et al[13]. Sangiorgi et al[14] found that Bmi-1 is expressed in discrete cells located near the bottom of crypts in small intestine. These cells proliferate, expand, self-renew and give rise to differentiated cell lineages of small intestinal epithelium, and ablation of Bmi1 (+) cells using a Rosa26 conditional allele expressing diphtheria toxin leads to crypt loss, suggesting that Bmi-1 is an intestinal stem cell marker in vivo.

In summary, Bmi-1 plays an important role in gastric cancer development, indicating that gastric cancer cells require Bmi-1 for their tumorigenic activity, and that interference with Bmi-1 activity may be a therapeutic strategy for GC. Thus, it is essential to elucidate the molecular mechanism of Bmi-1 involved in the cell cycle and to correlate this function with gastric stem cells in future.

It has been reported that B-cell-specific Moloney murine leukemia virus insertion site 1 (Bmi-1) is a transcriptional repressor that belongs to the polycomb-group family of proteins involved in hematopoiesis, regulation of proliferation and axial patterning. Bmi-1, an important factor for self-renewal and senescence of various stem cells, is highly expressed in various human malignant tumors.

Bmi-1, identified as a protein that down-regulates p16ink4a, is mandatory for the persistent existence of several stem cell classifications, such as hematopoietic and neural stem cells. It has been reported that Bmi-1 is a potential stem cell marker of the gastrointestinal tract. The expression of Bmi-1 is correlated with gastrointestinal stem cells as well as numerous other specialized cell types, and this protein plays a role in cellular differentiation rather than in stem cell maintenance. Bmi-1 is also a marker for carcinoma progression in nasopharyngeal cancer, bronchial carcinogenesis and myelodysplastic syndrome. Furthermore, microarray analyses performed in several other cancer types suggest that Bmi-1 mRNA is a prognostic marker.

In this study, immunohistochemical double-labeling staining was used to investigate the distribution of Bcl-2+/ki-67- cells, and to explore its correlation with Bmi-1, which provides a valuable clue to the location of normal gastric mucosal and gastric cancer stem cells.

Investigating the expression of Bmi-1 in gastric carcinoma (GC) and precancerous lesions helps researchers analyze its role and significance in tumorigenesis of GC. Bmi-1 may serve as an adjuvant marker for the diagnosis and prognosis of GC.

The study seems to be very interesting. The results, based on immunohistochemical observation, suggest that Bmi-1 plays a role in the progression of GC and is related to cell differentiation in the progression of gastricl mucosa injury to cancerization. Therefore, Bmi-1 may be used as an adjuvant prognostic marker. If the research incorporated reverse transcription polymerase chain reaction and Western blotting to quantify the RNA/protein expression, the results would be perfect.

A special fund for Key University Laboratories from Department of Education of Liaoning Province, No. 2008S233