AIM: To investigate the incidence of incidental gastrointestinal stromal tumor (GIST) and its etiopathogenesis.

METHODS: From January 1, 2000 to December 31, 2007, 13 804 cases of gastrointestinal epithelial malignant tumor (EMT) and 521 cases of pancreatic adenocarcinoma (PAC) were successfully treated with surgery at the Department of General Surgery and the Department of Thoracic Surgery, West China Hospital, Sichuan University, China. The clinical and pathologic data of 311 cases of primary GIST, including 257 cases with clinical GIST and 54 cases of incidental GIST were analyzed.

CONCLUSION: Incidental GIST may occur synchronously with other tumors and has a high prevalence in males. Surgery is its best treatment modality.

Gastrointestinal stromal tumor (GIST) is the most common mesenchymal tumor of gastrointestinal (GI) tract, probably arising from precursor interstitial cells of Cajal. Significant advances have been made in symptomatic GIST in the last two decades[12]. However, little is known about the incidental GIST detected during examinations or surgery for other reasons. Its clinicopathologic characteristics are unclear. Many cases of synchronous or asynchronous GIST with other tumors have been reported as single cases[3–6]. We discovered 54 cases of incidental GIST during surgery for epithelial malignant tumor (EMT). This study was to investigate the incidence of incidental GIST and its etiopathogenesis.

Hospital records of patients with incidental GIST were reviewed. Each patient was followed up by telephone or mail. Histopathologic features of primary GIST were evaluated by two experienced pathologists, blinded to their respective findings and patient outcomes, at the Department of Pathology, West China Hospital. The largest diameter of tumor was recorded. In patients with multiple GIST lesions, only the largest GIST lesion was included in pathological analysis. The risk category for GIST was defined by assessing the tumor size and mitotic count following the consensus guidelines of the National Institutes of Health-(NIH-NCI) workshop[7]. In addition to the assessment of CD117 in tumor cells, reactions with CD34, SMA, and S-100 proteins were also studied. Immunohistochemical examination of these proteins was performed on tumor tissues embedded in paraffin with DAKO (Glostrup, Denmark) antibodies according to the manufacturer’s instructions.

The median age of the 54 cases of incidental GIST was 63 years (range, 44-79 years). Interestingly, 48 of them (88.9%) were males, and 6 (11.1%) were females (P < 0.001). The patients presented symptoms of EMT without specific clinical manifestations indicative of GIST. Among the 54 patients, only a submucous lesion in gastric fundus, 2.5 cm in diameter, was preoperatively detected in 1 patient with GAC by gastroscopy, and a single-lesion was postoperatively detected in 4 patients by specimen examination. A total of 58 incidental GIST lesions were discovered in the 54 patients, including 51 single-lesions, 2 double-lesions, and 1 triple-lesion. A total of 90.7% incidental GIST lesions occurred in stomach, 3.6% in esophagus, 1.9% in terminal ileum, 1.9% in colon and 1.9% in omentum, respectively. The most common sites were the gastric fundus and body. In our series, 4 cases with a unique coexistence style (esophageal GIST + ESCC: 2, gastric GIST + ESCC + GAC: 1, colonic GIST + CRA: 1) have not been reported previously. The location of 54 incidental GIST lesions and their corresponding EMT lesions are shown in Table 1. 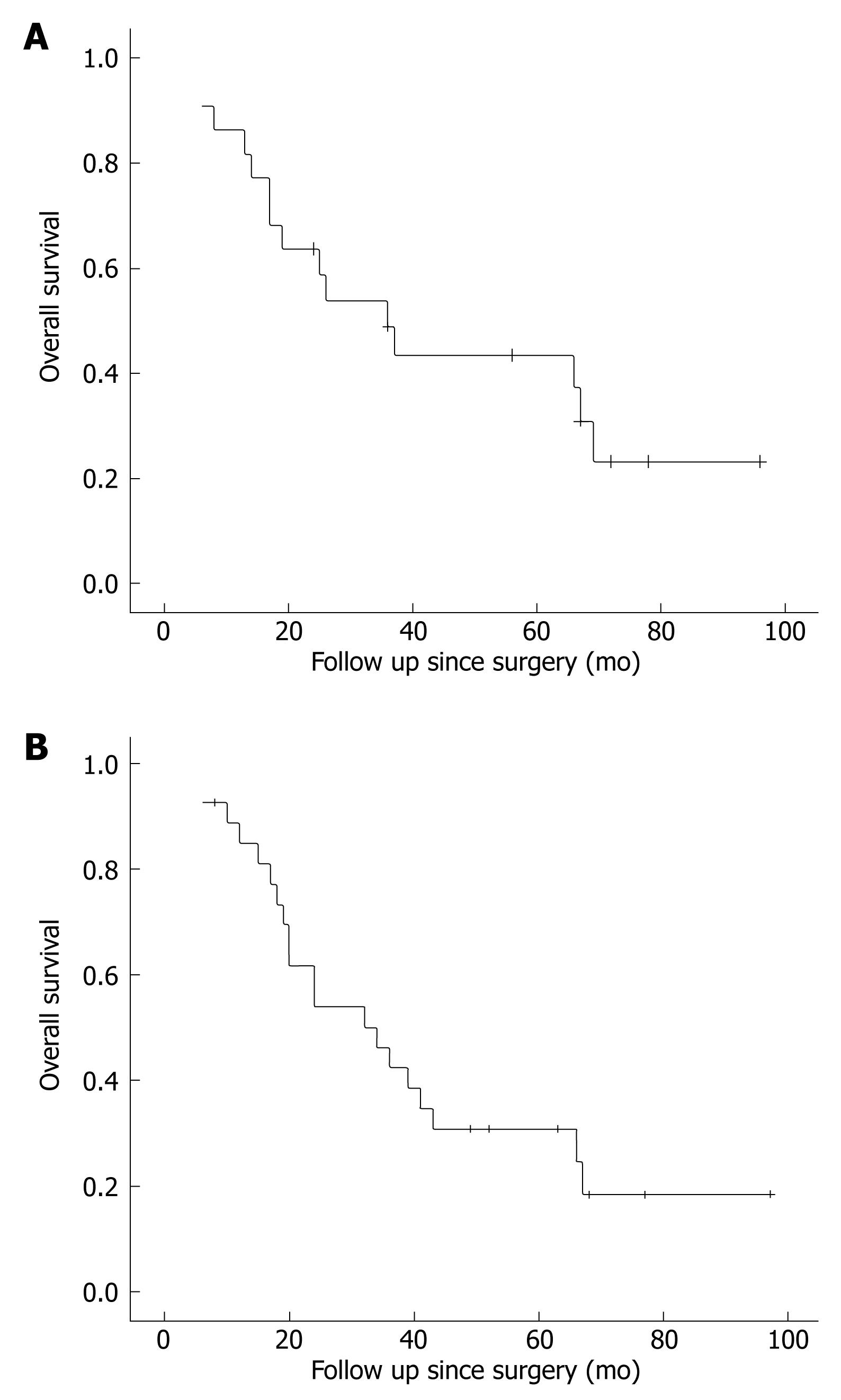 In our series, incidental GIST occurred simultaneously with EMT in 17.4% (54/311) of the GIST patients, which is higher than the reported incidence (14%)[8]. However, assessment of the actual incidence of incidental GIST with EMT is difficult, because the data are only based on patients who have been surgically treated, whereas EMT patients managed with non-surgical measures are unaccounted for. Moreover, during examination or surgery, identification of GIST is incidental rather than intentional, and many lesions are missed as a result.

Notably, in addition to those with EMT, many synchronous and asynchronous cases of GIST with non-epithelial tumors have been reported, such as osteosarcoma, Burkitt’s lymphoma, plasmocytoma, neuroblastoma, somatostatinoma, chronic lymphatic leukemia, lipoma and ectopic pancreas[49–13]. Synchronous incidental GIST and non-tumorous diseases have been reported, such as ulcerative colitis, Meckel’s diverticulum, rapidly progressive glomerulonephritis, HIV carriers, and Crohn’s disease[514–17]. Sanchez et al[18] reported that incidental gastric GIST is found in 0.8% of patients undergoing laparoscopic Roux-en-Y gastric bypass surgery for obesity. Kawanowa et al[19] showed that microscopic GIST can be found in 35% of stomach- resected patients with gastric cancer. It has been shown that microscopic GIST can be found in 10% of patients undergoing surgery for esophageal carcinoma[20]. Especially, incidental GIST has also been detected in 0.2% of all autopsies, accounting for 10% of all patients with primary GIST[21]. These findings suggest that incidental GIST may occur synchronously with other diseases more frequently than expected, and the incidence of incidental GIST might be much higher than that of clinical GIST.

Particular attention has been paid to clinical GIST because of its striking symptoms such as gastrointestinal bleeding, pain, dyspepsia, abdominal mass and obstruction[2223]. On the contrary, incidental GIST may emerge asymptomatically, and even if symptomatically, the symptoms may often be vague and nonspecific[18]. In our study, all the 54 patients presented symptoms indistinguishable from those of EMT, which might have been overlooked because of the progressing symptoms of EMT such as severe dysphagia, weight loss, abdominal pain and anemia. The size of incidental GIST was small, and the majority (90.7%) of them had a very low risk. Also, only a few reports are available on incidental GIST with a high risk[212425]. In this study, only 1.9% of clinical GIST lesions had a very low risk, and 38.5% had a high risk, indicating that GIST is malignant. Perhaps, incidental GIST might have emerged later than EMT, or their development may have been depressed by EMT through mechanisms which are yet to be studied.

Generally, the preoperative detection rate of incidental tumors is very low. In this study, except for two patients with PAC, the other patients received endoscopic examinations preoperatively, yet only one GIST lesion was found. Difficulty in detecting the lesion might be attributed to its small size and intramural location. Incidental GIST, if detected at CT or MRI, is often mistaken for metastatic lymph nodes derived from EMT. Therefore, radiological examination is minimally helpful for its diagnosis. As a result, the endoscopist and surgeon should take the major responsibility of detecting incidental GIST. Incidental GIST occurs most commonly in stomach, esophagus, small bowel, colon and omentum. Consistent with the reported findings[19], incidental GIST was observed in gastric fundus and body in the present study. Careful assessment of the hotspot (i.e. the upper portion of stomach) is important for both endoscopist and surgeon.

Interestingly, we found that there was a significant difference of the incidence of incidental GIST in male and female patients. Because of the unclear pathogenesis of incidental GIST, we cannot explain this finding. Further studies are needed on the gene expression in primary tumor cells from male and female patients and signal transduction may also provide us with some clues to this question.

In the absence of prospective control studies, whether resection of incidental GIST lesions helps to improve the quality of life and/or the survival rate of EMT patients remains unclear. There are two major concerns for incidental GIST if missed during operation for other tumors. First, residual GIST lesions may progress to invasive disease and cause intestinal obstruction and/or life-threatening gastrointestinal hemorrhage because the malignant potential is unpredictable based on gross appearance alone. Second, a residual incidental GIST may be mistaken for the relapse or metastasis of a previously removed neoplasm, which may result in inappropriate treatment of patients in follow-up after operation. Therefore, an en bloc resection with other tumors or an additional local resection with adequate margins has been recommended by surgeons[61825]. Making surgeons aware of this will help to correct surgical procedures, and ultimately improve the quality of life and avoid inappropriate treatment of patients during follow-up after operation.

Common carcinogenic agents, which result in a simultaneous proliferation of different cell lines (epithelial and stromal cells), may be involved in the development of incidental GIST as a mere coincidence. In this study, males with primary GIST were more likely to have a synchronous tumor than females (P < 0.001). Synchronous tumors may have a high prevalence in males. Simultaneous neoplastic proliferation of epithelial and stromal cells might be stimulated by the same carcinogenic factors, such as Helicobacter pylori infections, germline mutations, and exposure to ionizing radiation[6242627]. To clarify possible common carcinogenic agents against synchronous tumors, further studies are needed.

In conclusion, incidental GIST coexists with EMT at a higher incidence than expected. Surgeons are advised to be alert against possible primary GIST accompanying other tumors.

Gastrointestinal stromal tumor (GIST) is one of the most common tumors in gastrointestinal (GI) tract, probably arising from precursor cells that serve as a pacemaker to trigger gut contraction. It may exist alone with clinical manifestations or coexist with other diseases. The former is usually diagnosed by its clinical presentations and called clinical GIST, while the latter is usually found during examination or surgery for other diseases and called incidental GIST.

The incidence of incidental GIST coexisting with other GI tumors is much higher than expected. However, without specific manifestations, preoperative detection of incidental GIST is difficult. Residual GIST lesions may progress to invasive diseases, cause intestinal obstruction and/or life-threatening gastrointestinal hemorrhage. In addition, residual incidental GIST may be mistaken for the relapse or metastasis of previously removed tumors, resulting in inappropriate treatment of patients during follow-up after operation. A careful inspection for GIST is highly recommended during surgery for GI tumors.

GIST is one of the tumors in the GI tract, probably arising from precursor cells that serve as a pacemaker to trigger gut contraction. GI epithelial malignant tumor (EMT) refers to a tumor arising from the surface cells of the GI tract.

This article is the first report to present the incidence of incidental GIST accompanying gastrointestinal EMT. In this study, the authors evaluated the incidental GIST and its clinical significances. The title of the paper reflects the major contents of the article. The abstract gives a clear delineation of the research background. Results and discussion are well organized. The conclusion is reliable and valuable.