We aimed to evaluate the efficacy of tricyclic antidepressants (TCAs) as a therapeutic option for irritable bowel syndrome (IBS) through meta-analysis of randomized controlled trials. For the years 1966 until September 2008, PubMed, Scopus, Web of Science, and Cochrane Central Register of Controlled Trials were searched for double-blind, placebo-controlled trials investigating the efficacy of TCAs in the management of IBS. Seven randomized, placebo-controlled clinical trials met our criteria and were included in the meta-analysis. TCAs used in the treatment arm of these trials included amitriptyline, imipramine, desipramine, doxepin and trimipramine. The pooled relative risk for clinical improvement with TCA therapy was 1.93 (95% CI: 1.44 to 2.6, P < 0.0001). Effect size of TCAs versus placebo for mean change in abdominal pain score among the two studies was -44.15 (95% CI: -53.27 to -35.04, P < 0.0001). It is concluded that low dose TCAs exhibit clinically and statistically significant control of IBS symptoms.

IBS is a prevalent functional gastrointestinal (GI) disorder characterized by chronic or recurrent abdominal pain or discomfort associated with altered bowel habits[1]. Up to 20% of the North American population are affected by IBS[2]. A community-based study carried out in Birmingham, UK estimated the prevalence of IBS to be 10.5%[3]. IBS is commonly diagnosed between the ages of 15 and 45 years and affects women twice as often as men[34]. IBS places a significant burden on health economy in terms of using more health care services even for non-gastrointestinal symptoms comparing to general population[5].

MANAGEMENT OF IBS AND CURRENT PLACE OF TRICYCLIC ANTIDEPRESSANTS (TCAs)

In addition to non-pharmacological strategies such as diet and psychotherapy, various pharmacological agents are used for the management of IBS including bulking agents, antidiarrheal agents, laxatives, antispasmodics, antidepressants, serotonergic agonists or antagonists, antibiotics and probiotics[8–12]. The rationale of using antidepressants in IBS is that these agents may alter pain perception by a central modulation of visceral afferents, treat comorbid psychologic symptoms, and alter GI transit. Different classes of antidepressants likely act by different combinations of mechanisms[1]. Two classes of antidepressants frequently used for the treatment of IBS are selective serotonin reuptake inhibitors (SSRIs) and TCAs. In a meta-analysis done in 2007[8], the efficacy of SSRIs in IBS was reported. In the present paper, the efficacy of TCAs in IBS has been reviewed by meta-analysis of all randomized controlled trials.

PubMed, Scopus, Web of Science, and Cochrane Central Register of Controlled Trials were searched for studies investigated the efficacy of TCAs in IBS. Data were collected for the years 1966 to 2008 (up to September). The search terms were: “tricyclic antidepressants”, “amitriptyline”, “amoxapine”, “clomipramine”, “desipramine”, “dothiepin”, “doxepine”, “imipramine”, “iprindole”, “lofepramine”, “nortriptyline”, “opipramol”, “protriptyline”, or “trimipramine” and “irritable bowel”, “functional bowel diseases” or “irritable colon”. Search was restricted to English literature. Reference lists of the retrieved articles were also reviewed for additional applicable studies.

All controlled trials investigating the efficacy of TCAs in patients with IBS were considered. “Global improvement of symptoms” and “adequate relief of pain and discomfort” were the key outcomes of interest for assessment of efficacy. We evaluated all published studies as well as abstracts presented at meetings. Three reviewers independently examined the title and abstract of each article to eliminate duplicates, reviews, case studies, and uncontrolled trials. Trials were disqualified if they were not placebo-controlled or their outcomes did not consider efficacy. Reviewers independently extracted data on patients’ characteristics, therapeutic regimens, dosage, trial duration, and outcome measures. Disagreements, if any, were resolved by consensus.

Data from selected studies were extracted into 2 × 2 tables. All included studies were weighted and pooled. Data analysis was done using StatsDirect (2.7.2). Relative risk (RR) and 95% confidence intervals (95% CI) were calculated using Mantel-Haenszel and effect size (weighted mean difference) meta-analysis was performed using Mulrow-Oxman method. The Cochran Q test was used to test heterogeneity. The event rate in the experimental (intervention) group against the event rate in the control group was calculated using L'Abbe plot as an aid to explore the heterogeneity of effect estimates. In case of homogeneity, fixed effect model was used for meta-analysis; otherwise random effect model was applied. In addition to Kendall’s t test[14], funnel plots were used as an indicator for publication bias[15].

The electronic searches yielded 694 items; 191 from PubMed, 10 from Cochrane Central, 168 from Web of Science, and 325 from Scopus. Of these, 15 trials were scrutinized in full text and 7 trials[16–22] were included in the analysis (Figure 1). Of these 7 studies, 6[16–21] obtained a Jadad score of 3 or more and the remaining one[22] gained a Jadad score of 2 (Table 1). Regarding the Cochran Q test for heterogeneity, it was found that this study did not cause heterogeneity in our meta-analysis and thus, it was not excluded. Patients’ characteristics, IBS subtype, TCA subclass, dosage, duration of treatment/follow up for each study are reported in Table 2. All subtypes of IBS (diarrhea-predominant, constipation-predominant and alternating) were incorporated in the included studies. This meta-analysis included 257 IBS patients randomized to receive either TCA or placebo. The efficacy of various TCAs has been investigated including amitriptyline (3 trials), imipramine (1 trial), desipramine (1 trial), doxepin (1 trial) and trimipramine (1 trial). Duration of treatment/follow up ranged between 4 and 12 wk. Definition of clinical response and mean change in abdominal pain score in each study are reported in Table 3. 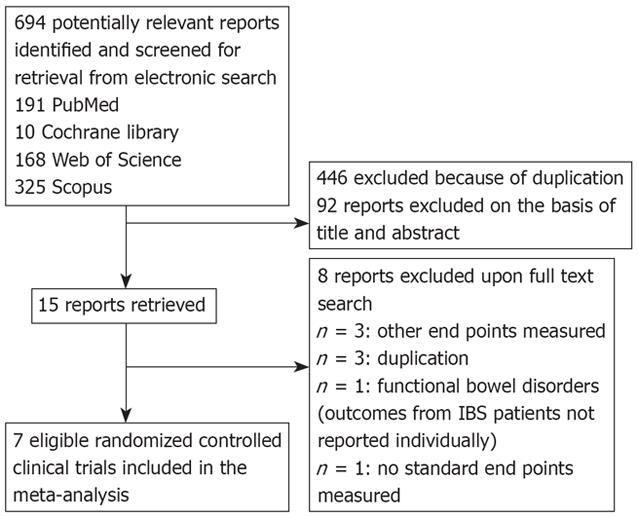 Studies that considered abdominal pain score as an outcome showed homogeneity using Cochrane Q test (P = 0.61). Regression of normalized effect vs precision for all included studies for mean change in abdominal pain score could not be calculated because of too few strata. 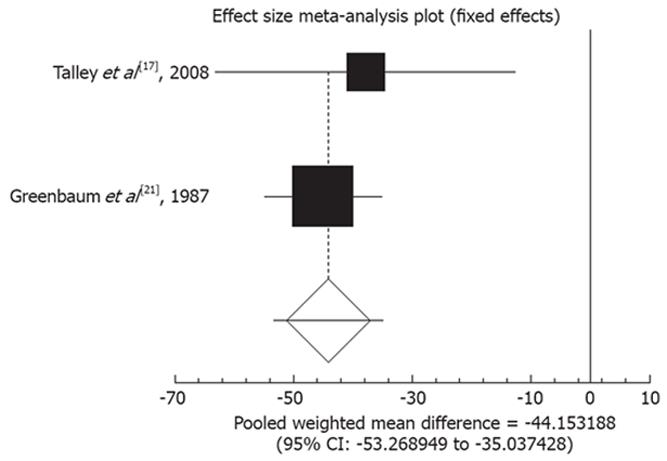 Figure 3 Pooled weighted mean difference for the outcome of “mean change in abdominal pain score” in the studies considering TCAs vs placebo.
DISCUSSION

Visceral hypersensitivity and dysregulation of central pain perception in the brain-gut axis is considered to play a pivotal role in the pathophysiology of IBS. IBS patients have a lower sensory threshold to colonic and rectal balloon distention and electrical stimulation[23]; therefore, beneficial effects of antidepressants can be explained by partial increment in central pain threshold. Other mechanisms by which antidepressants might express their effect include anticholinergic effects, regulation of GI transit and peripheral antineuropathic effects[2425]. The results from the current meta-analysis show that TCAs induce clinical response and reduce abdominal pain score in patients with IBS.

Other meta-analysis studies that considered the effects of antidepressants in functional gastrointestinal diseases have essential differences with the present study: O'Malley et al[26] pooled all functional diseases including IBS, functional dyspepsia, headache, fibromyalgia, and chronic fatigue. Jackson et al[27] included all the functional gastrointestinal disorders and found a statistically significant effect for TCAs (OR 4.2; 95% CI: 2.3 to 7.9). Quartero et al[8] included 4 studies for “global improvement of symptoms” and 2 studies for “abdominal pain” and demonstrated no benefit for antidepressants. Lesbros-Pantoflickova et al[28] demonstrated a favorable effect for antidepressants (OR 2.6; 95% CI: 1.9 to 3.5). Studies with visual analogue outcome[29] and functional dyspepsia patients were included in their analysis. None of these reviews meta-analyzed the newer evidence that has surfaced in the literature[161718].

Unfortunately, conduction of a randomized controlled trial in the field of antidepressants and IBS is challenging. High placebo response in IBS affects study trials and the stigma of antidepressants disturbs the compliance rate. Randomization is elusive as TCAs have immediate noticeable side effects for patients. As mentioned in Table 1, the majority of trials are of a medium quality. A well-designed trial has been conducted by Drossman et al[30] although not included in our study because of the recruitment of all functional bowel disorders. Drossman et al[30] conducted a large randomized 12-wk placebo-controlled trial evaluating the efficacy of desipramine in treating moderate to severe IBS (80% of the patients), functional constipation and functional chronic abdominal pain. Desipramine was shown to have statistically significant benefit over placebo in the per protocol analysis after non-compliant and drop-out patients were excluded (responder rate 73% vs 49%). 11% of the patients were proven to be non-adherent with non-detectable blood levels. This underlines the fact that previous studies might have underestimated the effect of antidepressants by the inclusion of non-adherent cases.

Generally, management of IBS requires lower doses of TCAs compared to doses used to treat depression; reflecting the fact that modulation of the brain-gut axis rather than treating concomitant depression is the target in IBS patients. Myren et al[29] in a large 8-wk trial demonstrated no dose-related response with various dosing regimens of trimipramine.

This review has some limitations. Funnel plot is suggestive of publication bias with lack of negative small RCTs. However, a firm conclusion about bias is elusive to reach as the asymmetry of the funnel plot is minimal and Kendall’s T is not suggestive of publication bias. In addition funnel plots can show asymmetry for various reasons other than publication bias[33]. Paucity of small negative or neutral studies has been brought to attention in other functional disorders[26] which might encompass IBS as well. Therefore, our pooled OR might be an overestimate of the true effect. Some other limitations that can be numbered for this meta-analysis are usage of various TCA formulations and doses, dissimilar duration of treatment, and different diagnostic criteria for IBS.

TCAs exhibit clinically and statistically significant control of IBS symptoms; however, given their abundant side effects they should be reserved for moderate to severe cases. Subjects should be started on subtherapeutic doses for depression and choice of drug should be tailored for each individual. We suggest using TCAs with the least anticholinergic effects (i.e. doxepin and desipramine) for elderly patients or constipation-predominant IBS and imipramine or amitriptyline for diarrhea-predominant IBS and patients with insomnia. Larger comparative trials with strict surveillance on compliance are needed to elaborate the role of antidepressants in standard practice.

In addition, new evidence suggests that IBS is very similar to IBD in pathogenesis but different in severity. Recent meta-analyses have indicated the benefit of antibiotics, probiotics, and anti-tumor necrosis factor agents[34–42] in IBD and thus the effects of these drugs on IBS remain to be elucidated in the future.