AIM: To investigate the presence of human papillomavirus (HPV) in esophageal squamous papilloma (ESP) and determine p16, p53 and Ki67 expression in a Mexican cohort.

CONCLUSION: This study provides identification of HPV infection in almost 80% of ESP using either ACISH or PCR; overall, all of these lesions show low expression of cell-cycle markers. We suggest ACISH as an alternative diagnostic tool for HPV detection in ESP. 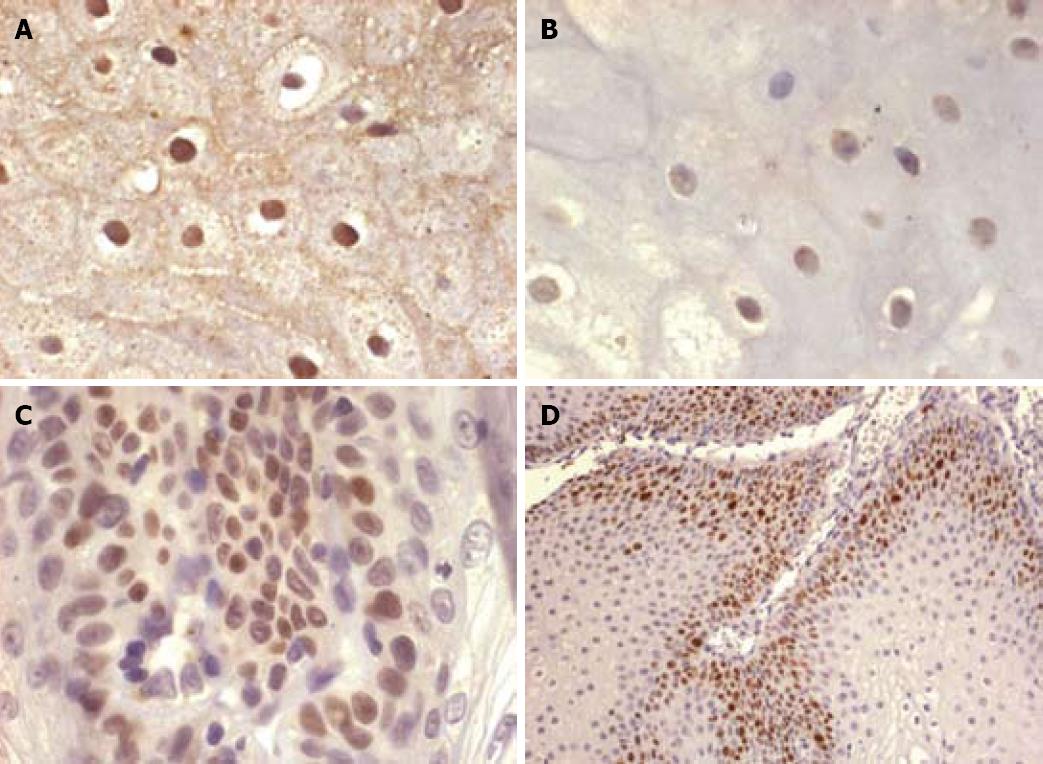 Esophageal squamous papillomas (ESPs) are uncommon benign lesions, usually asymptomatic and often discovered as incidental findings. ESPs were first described by Adler in 1959[1-5]. The etiology and pathogenesis of ESP appear to be related to an inflammatory-reparatory type, such as chronic gastro-esophageal reflux, esophagitis, trauma, chemical irritants, and viruses[6,7]. Their malignant potential is still unclear, and it has been proposed that Human Papillomavirus (HPV) plays an etiopathogenic role; however, HPV is not consistently identified[8,9]. The detection of HPV in ESPs may have a great value, in terms of follow-up of lesions associated to genotypes implicated in the genesis of premalignant and malignant lesions in squamous epithelial-lined tissues, including nasal cavity, pharynx and the anogenital tract[7].

The Mexican population possesses a high prevalence of HPV-related cervical lesions. Previous studies have demonstrated high expression rates of p16INK4a in cervical lesions[10]; however, little is known on p16INK4a and the etiologic role of HPV in the development of ESPs. The purpose of this study is to investigate the presence of HPV through molecular techniques in a cohort of 19 ESPs cases and determine the relationship between HPV and the expression of cell cycle proteins.

Nineteen specimens from 18 patients were retrieved from the Department of Pathology-UPAEP University Hospital files during a 12-year period. Endoscopic reports and clinical charts were reviewed to obtain information about age, gender, symptoms, endoscopic location and past medical history. Clinical and endoscopic follow-up were available for sixteen patients.

Molecular techniques were applied depending of availability of tissue. In 16 out of 19 cases, detection of HPV was performed by amplified chromogenic in situ hybridization (ACISH) (GenPoint/DakoCytomation, Carpinteria, California, USA), using a HPV biotinylated DNA probe. Nineteen samples of normal esophageal mucosa were used as negative controls.

Fourteen FFPET out of 19 ESPs were examined for HPV by PCR-RFLP, as described previously[11,12]. DNA was extracted from FFPET blocks (cases and negative control samples). After DNA extraction, amplifications were performed using consensus primers MY09 and MY11. To determine HPV types 6/11, 16, 18 and 31, the PCR products were digested using restriction endonucleases and analyzed by agarose gel electrophoresis.

The clinical and pathological features of the patients and their tumors are shown in Table 1. The average age at presentation was 46.3 years (range 28-72 years). Patients included four (22.22%) males and 14 (77.77%) females. The most frequent indication for endoscopy was abdominal pain (15 patients), followed by reflux (seven patients). In all cases, ESPs were incidental findings, discovered during the endoscopic procedure. In none of the cases was Barrett’s esophagus or respiratory-tract papillomatosis reported. Clinical data showed no history of HPV-related diseases, immunosuppression or radiotherapy. At endoscopy, some patients also presented with Helicobacter pylori infection, chronic gastritis, peptic ulcer disease, hiatal hernia, esophagitis and reflux esophagitis.

Endoscopically, the most frequent location of ESP was the upper third (11 cases), followed by the middle third (3 cases) and unknown site (5 cases). All except one case were present as a single lesion. Patients underwent total endoscopic excision. Clinical and endoscopic follow-up was done in sixteen of the patients, and no recurrences have been documented to the date.

Grossly, ESPs present as polypoid, soft, smooth, whitish-pink tumors, ranging from 3 to 7 mm at their largest dimension. Histological examination revealed exophytic lesions, composed of branched fibrovascular core, covered by acanthotic squamous epithelium. No other growing pattern was observed. Basal cell hyperplasia and koilocytosis were present in all cases (100%). Vacuolated cells in the upper layers were detected in all cases. Parakeratosis, papillomatosis and intraepithelial lymphocytes and some eosinophils were also noted. Ten cases (52.63%) showed a prominent epithelial granular layer and intraepithelial capillary loops were present in nine cases (47.36%). Dyskeratotic cells and multinucleated giant cells were absent and no dysplastic changes were found in any of the patients.

HPV was detected in 14 of 16 cases (87.5%) by ACISH: Twelve showing a diffuse and complete nuclear staining pattern (indicating the episomal state of the HPV viral genome, Figure 1A) and two a nuclear granular pattern (indicating the integrated form of the HPV viral genome, Figure 1B). HPV DNA was identified by PCR in 12 of 14 cases (85.7%). Infection by a low risk type HPV (6/11) was detected in 10 of 14 cases, whereas two of the 14 cases were infected by a high risk HPV type (16). Both high risk cases showed a granular staining pattern on ACISH, suggesting viral genomic infection. In two cases, ACISH demonstrated a diffuse pattern and HPV was not documented by PCR.

p53 was expressed in 17 cases (89%). The percent of p53-positive cells ranged from 10 to 15%, showing a basal and focal expression (Figure 1C). There was no difference between the p53 expression of non-infected and HPV-detected ESPs. In two cases, IHC for p53 was not performed (no tissue was present in the block). Eight cases (42.10%) expressed p16INK4a (both nuclear and cytoplasmic). Four of these cases were infected by 6/11 serotypes. In those cases, p16INK4a revealed a low rate of expression (< 20%), mostly at a basal layer location and focally extending into the medium third. Ki67 proliferative index in 17 cases ranged from 10 to 30% on basal cells (Figure 1D), and there was no difference on expression between non-HPV-related lesions and HPV high and low risk-related lesions.

This report of cases represents the first study performed in Mexico to determine the presence of HPV in an unusual esophageal lesion, whose relation with esophageal carcinoma is not completely understood. The etiology is still unclear, and the role of HPV in squamous cell lesions of the esophagus is difficult to establish. Since 1982, when Syrjanen et al[13] demonstrated the presence of HPV antigens in ESP, a certain percentage of ESPs have been reported as associated with HPV[2,7,14-16]; however, this relationship has not been consistently proven. Some authors hypothesize that mucosal injury, followed by regeneration, is the key role in the pathogenesis, supported by the coexistence of ESPs and gastro-esophageal reflux, esophagitis and hiatal hernia; also by the fact that most of the ESPs are located in lower level of the esophagus[7,17-18]. In a study, Talamini et al[9] found that in the Italian population, ESPs are located mostly in the middle third and secondarily, in the lower third; this study also reported a very low prevalence of cases associated with HPV and implied that alcohol intake and cigarette smoking were risks factors.

In contrast to previous reports, our study shows a female predominance, and a predominantly upper third location[8,9]. These findings raise the possibility that certain factors, including gastro-esophageal reflux, are unlikely to be the main etiological factors or are responsible for only a small proportion of cases. For that reason, some others conditions or perhaps, behavioral reasons, might be related in this specific population.

In our series of cases, we found that ten out of 11, were located in the upper third and were related to HPV-infection. In two of them, high grade serotypes (HPV 16) were detected. How does HPV get access to that location? This is still unknown. Jalal et al[19] have shown HPV DNA in the mouths of individuals with clinically normal oral mucosa. HPV is an epitheliotropic virus that requires the environment of a differentiating squamous epithelium for their life cycle. Peripheral blood mononuclear cells may serve as HPV carriers, spreading the virus via the blood[20]. The Mexican population possesses a high prevalence of HPV-related cervical lesions, and some mechanism of infection probably exists, including viral transmission by direct contact (e.g. sexual) that might involve the infection of the upper third of the esophagus, but we could not confirm this hypothesis due to the non-availability of clinical information of the HPV-infection status in the patients’ sexual partners.

According to Winkler et al[21], 31% of ESPs having histological findings of HPV infection, show positive reactions to HPV antigens by IHC; Odze et al[7] reported 50% positivity of HPV in 38 cases using PCR, mostly type 16, and proposed a multifactorial etiology including mucosal irritation and HPV association; Woo et al[18] also suggest a multifactorial cause and Poljak et al[8] believe that HPV DNA in ESPs is not the result of viral infection but the result of incidental HPV colonization which have been formed as result of other etiological factors; genetic association has also been mentioned[2]. In our study, we believe that presence of HPV-associated ESPs, reflects the high prevalence of the virus in developing countries, including Mexico, in contrast to western countries, and is in agreement with previous reports[22].

The malignant potential of ESPs has been described in some studies and is controversial[18]. According to Talamini et al[9], ESPs appear not to have a risk of development of malignancy or to be a marker of such risk. We found a predominance of HPV infection by low-risk serotypes and in two cases, high-risk serotype infection; however, no dysplastic changes, malignant transformation or recurrence was identified. Furthermore, we suggest that clinical and endoscopic follow-up should be recommended and performed on regular basis on patients with HPV high-risk serotypes lesions. These serotypes have been demonstrated by numerous epidemiologic and molecular studies to be the etiologic agents for an overwhelming majority of premalignant and malignant cervical cases[23] and in consequence, HPV might be related as a risk factor for esophageal carcinoma[7].

Previous reports have shown a correlation between p16INK4a expression in cases of cervical dysplasia HPV-related[10]. Although we did not find a relationship between HPV infection and protein expression of cell cycle markers, we believe that their utility will be mainly in the grading of dysplasia, and also in the evaluation of esophageal lesions when dysplasia or malignancy is suspected.

In summary, our study provides strong evidence that most ESPs are associated with HPV infection; however we believe that other pathogenetic mechanisms are related to the development of these lesions. PCR is currently considered to be the most sensitive method for the detection of HPV infection available[8] but is susceptible to false positives due to contamination. Although PCR is the gold-standard for HPV evaluation, PCR is not available in the pathological routine evaluation and ACISH might serve as a useful and alternative diagnostic tool for HPV detection.

Squamous papillomas are uncommon benign lesions of esophagus, of unknown etiology, and controversial malignant potential. Esophageal squamous papillomas (ESP) have been found to be associated with different conditions, including gastro-esophageal reflux, inflammation and trauma. Human papillomavirus (HPV) has been implicated in the genesis of malignant neoplasms in squamous epithelial-lined tissues, including the nasal cavity, pharynx and anogenital tract; however, previous studies have not consistently identified HPV in ESP.

This study was designed to identify the presence of HPV in a series of 19 ESPs, from a population with high cervical HPV prevalence. Identification of HPV was performed by molecular techniques, and cell-cycle markers expression was assessed by immunohistochemistry.

Previous studies have not consistently identified HPV in ESP. To the best of our knowledge, this is the first study performed in Latin America to determine HPV infection in esophageal papillomas. In this Mexican cohort, we found that almost 80% of ESPs were associated with HPV infection.

Due to the well-known association of HPV with premalignant and malignant conditions, follow-up of patients with esophageal lesions with high-risk type of HPV and viral genomic infection should be implemented and guaranteed. Amplified chromogenic in situ hybridization (ACISH) can be used as an alternative diagnostic tool for routine HPV identification.