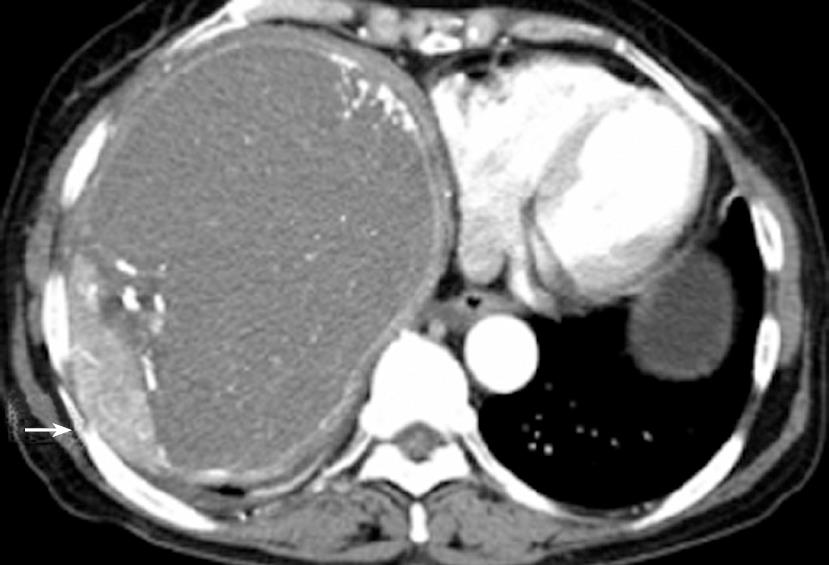 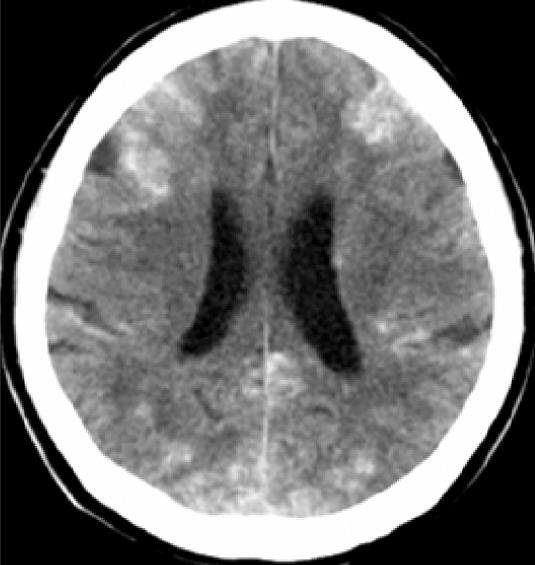 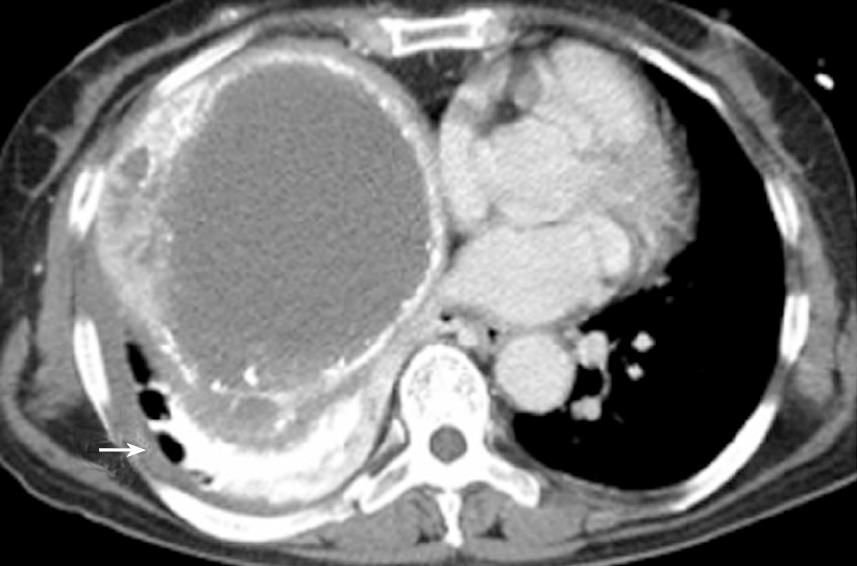 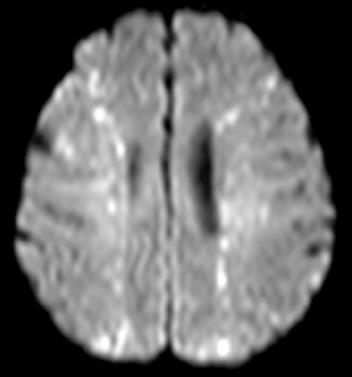 Hepatocellular carcinoma (HCC) is a common malignancy in Asia[1,2]. Many patients with HCC present with advanced stage disease when first diagnosed. There are a variety of different therapeutic modalities used to treat advanced HCC. Transcatheter arterial chemoembolization (TACE) is used to confine tumors to the liver, in addition to shrinking their size, limiting the progression to vascular invasion, and decreasing the risk that viable tumor will embolize systemically, during hepatic manipulation at transplant hepatectomy[3-5]. Although TACE is an invasive procedure associated with several potential complications, it is a procedure that has been adopted worldwide and is the mainstay of treatment of patients with advanced HCC[6].

To date, the literature on embolic injury to the brain, associated with iodized oil after TACE, includes only four reports[7-10]. Here we report our experience with a patient who had HCC and a cerebral lipiodol embolism (CLE) after TACE and review the previous literature.

A 62-year-old woman with advanced HCC was admitted to the hospital for her third course of TACE. Six months previously, she was diagnosed with HCC. A 15 cm × 12 cm, well demarcated and exophytic growing tumor, at the right hepatic lobe without portal invasion, was initially identified. The exophytic HCC growth was contiguous to the diaphragm (Figure 1). Although serum alpha-fetoprotein (4514 ng/mL) was very elevated, metastatic evidence to the regional lymph nodes and bone marrow was not detected. The patient was initially treated with TACE and had a second course six months later.

There was no evidence of cirrhosis. The distal substraction angiography (DSA) revealed the HCC was supplied from the right inferior phrenic artery and right hepatic artery. A third course of TACE was performed via two arteries using a mixture of 50 mg adriamycin and 30 mL lipiodol as well as gelatin sponge particles (Gelform; Upjohn, MI, USA).

During the procedure, patient had no complaints, and the vital signs remained stable. Immediately after the procedure, the patients’ level of consciousness deteriorated; in addition, she had breathing difficulty. The arterial blood gas analysis showed a PaO2 of 55.7 mmHg, consistent with hypoxemia. A computed tomography (CT) scan of the brain, without contrast, 7 h after the TACE procedure revealed multiple lesions of increased attenuation in the cerebral cortex, basal ganglia, thalami, and cerebellum (Figure 2).

At the same time, a CT of the chest revealed hyper-attenuated images at the right lung base (Figure 3). Forty-eight hours after the procedure, magnetic resonance imaging (MRI) of the brain was performed. Diffusion-weighted (DW) images demonstrated disseminated hyper-attenuated and hyper-intense punctate-patchy lesions in the cerebrum and cerebellum (Figure 4). The laboratory data was not remarkable except for a leukocytosis. The chest X-ray showed a right pleural effusion and diffuse parenchymal infiltration one day post TACE. Echocardiography revealed no atrial septal defect or other intracardiac shunt. Three weeks later, a follow up brain CT scan revealed complete resolution of the lesions. The patients’ level of consciousness gradually had improved. The neurological symptoms recovered completely by discharge 6 wk later.

The symptoms associated with CLE are variable and include visual loss, headache, motor dysfunction, and mental status changes; the severity of such symptoms varies with the site of lipiodol deposition. Occasionally, patients present with dispend and hypoxia when the lungs are involved in lipiodol embolization (Table 1).

It is known that CLE is associated with a right-to-left shunt, and infusion of a large dose of lipiodol[12,13]. Right-to-left shunt is often undetectable on routine examination, including chest or abdominal CT, DSA, and routine echocardiography. Evidence of a shunt has not been reported in previous studies (Table 2). It is not necessary to routinely examine for detection of shunt prior to the TACE. But, if a condition is present that increases the risk of a shunt[14], further evaluation to detect the shunt is indicated.

In most prior cases of CLE including present case, the HCC was a large tumor[7,9,10]. Determination of the optimal dose of lipiodol is of critical importance. The lipiodol dose is determine by a variety of factors including the blood supply of the tumor, the tumor size, the patients’ condition, procedure tolerance, catheter position, and liver function reserve[15,16]. Generally, it is known that lipiodol dose should not exceed 15 mL to 20 mL in order to prevent the risk of an extrahepatic embolism[13]. However, there were prior reported cases of CLE that had appropriate doses of lipiodol[8-10]. Moreover, there was a study that recommend the use of a high dose iodized oil (more than 20 mL) TACE for patients with large HCC[17]. Therefore, all procedures must be individualized.

Another risk factor of a CLE is the communication between inferior phrenic artery (IPA) and the pulmonary artery; this might occur with adhesive pleura or tumor invasion[10,11]. In the previous reports, including present case, the vessels used for the lipiodol infusion described for four of seven cases. Among the four cases, there were three where lipiodol was infused into the right IPA[7,9]. In addition, in one of the four cases, where the IPA was not used, the lipiodol was infused into the right renal capsular artery (RCA), which might have been anastomosed to the IPA. Evidence of pulmonary embolism was noted in six of seven cases.

Therefore, we think that right IPA to pulmonary artery shunt is also a potential route for right-to-left shunt.

In the present case, because we performed echocardiography and DSA, we confirmed the absence of intracardiac and intratumoral shunts. The communication between IPA and pulmonary vessels occurred via adherent pleura and tumor recurrence. Moreover, a large dose of lipiodol was used and, therefore, the patient had a greater risk for a CLE.

As previous reports recommended[10], the total dose of lipiodol should not exceed 20 mL and injection of lipiodol via the IPA should be used with caution during TACE procedure.

To prevent a CLE, an individualized plan of therapy including the lipiodol dose, evaluation for a shunt and choice of the vessels used for the lipiodol infusion prior to TACE are important considerations.