AIM: To analyze the prognostic impact of lymphade-nectomy extent in advanced gastric cancer located in the cardia and fundus.

METHODS: Two hundred and thirty-six patients with advanced gastric cancer located in the cardia and fundus who underwent D2 curative resection were analyzed retrospectively. Relationships between the numbers of lymph nodes (LNs) dissected and survival was analyzed among different clinical stage subgroups.

At present, surgery is the most effective treatment for gastric cancer. As the standard procedure for advanced gastric cancer, D2 radical resection has been widely accepted and practiced[1–3]. The final results of a randomized Dutch trial[4] showed that patients with N2 disease might benefit from a D2 dissection, which required removing all the lymph nodes (LNs) of Group 1 and Group 2. According to another randomized Italian trial[5], a D2 lymphadenectomy was also advised. Lymph node metastasis is considered one of the most important prognostic factors[67], and adequate lymphadenectomy is advocated for gastric cancer. However, the number of LNs that should be removed and examined when performing a D2 lymphadenectomy has not been determined for advanced gastric cancer located in the cardia and fundus[8]. Therefore, the aim of this retrospective study was to evaluate the relative contributions of both the number of total resected LNs and the number of negative LNs to the outcome of patients with advanced gastric cancer located in the cardia and fundus, and provide further evidence for rational lymphadenectomy.

Between January, 1996 and June, 2002, 236 patients diagnosed with primary gastric cancer located in the cardia and fundus was treated with curative resection at the Department of Oncology, Affiliated Union Hospital of Fujian Medical University, Fuzhou, China. The surgical procedure was defined as curative when no grossly visible tumor tissue (metastasis or LN involvement) remained after the resection and the resection margins were histologically normal. There were 197 male and 39 female patients whose ages ranged from 30 to 79 years (58.8 ± 9.8 years). All patients received a D2 or more extended dissection according to the Japanese Classification of Gastric Carcinoma (JCGC). Lymph nodes were meticulously dissected from the en bloc specimens, and the classification of the dissected LNs was determined by specialist surgeons who reviewed the excised specimens after surgery based on the Japanese Classification of Gastric Carcinoma[9]. The clinical and histopathologic data of each patient were collected and recorded in a specifically designed form. The tumors were histologically classified according to the WHO classification criteria and staged according to the 5th Edition of the TNM system[10], as listed in Table 1. The follow-up was carried out by trained investigators through mailings, telephone calls, visiting patients or recording the patients’ consultations at the outpatient service. The survival time was the time from diagnosis until the last contact, the date of death, or the date that the survival information was collected. All surviving patients were followed for more than five years. The median follow up for the entire cohort was 44 mo (range, 1-136 mo). The follow-up rate was 94.0%, with 222 cases involved.

RESULTS
Analysis based on total and negative LNs examined

The five-year overall survival rate of the entire cohort was 37.5%. The backwards elimination model yielded the following independent prognostic variables: total LN count (or number of negative LNs examined; P < 0.0001), number of positive LNs (P < 0.0001), T category (P < 0.0001) and tumor size (P = 0.015). The covariates gender (P = 0.052), age (P = 0.329), Borrmann type (P = 0.373), histological grade (P = 0.132), and type of gastrectomy (P = 0.093) all failed to retain significance levels in this model. The risk ratios and 95% confidence intervals are listed in Table 2. The number of negative LNs and the total number of LNs examined behaved interchangeably and maintained a similar significance level when substituted for each other. This suggests that the number of negative LN can reflect the extent of lymphadenectomy, as can the total number of LNs. 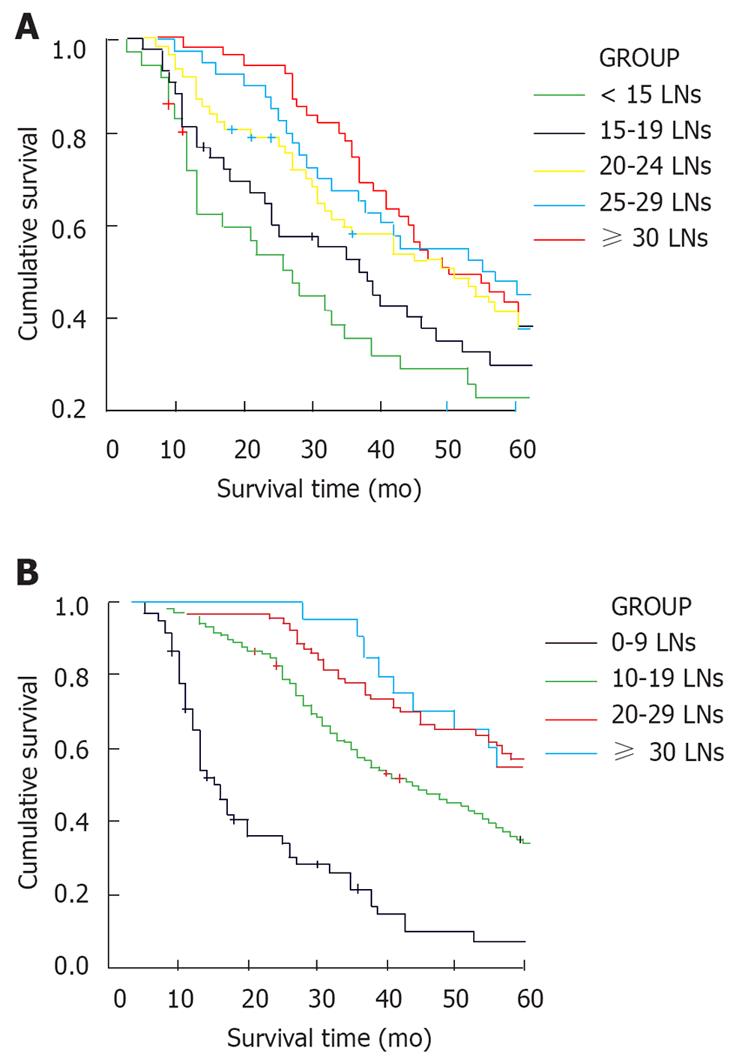 In an attempt to identify the optimal total LN count cutoff, survival comparisons were made for all stage groups at increasing total LN counts between 7 and 35. The greatest discrepancies, as measured by the chi-square test, were stage dependent, and varied from the cutoff levels of 20 (stage II), 25 (stage III), and 30 (stage IV) to the cutoff level of 15 (entire cohort), as listed in Table 4.

Over the last few decades, an increase in the incidence of upper third gastric cancer has been reported by many investigators around the world[11–13]. It is generally accepted that the prognosis of patients with this type of carcinoma is worse than for tumors in other parts of the stomach[1415]. The only potentially curative treatment for this disease is complete surgical resection, with an en bloc LN dissection. The D2 radical resection has been regarded as the standard surgical procedure for advanced gastric cancer[16]. Lymph node dissection during the D2 radical resection is not confined to the anatomical extent, but also to the number of LNs dissected. The current edition of the UICC staging manual recommends examining at least 15 LNs for adequate gastric cancer staging. However, is that adequate for advanced gastric cancer located in the cardia and fundus? It was reported that patients with advanced gastric cancer located in the cardia and fundus often showed a higher frequency of perigastric LNs and higher proportion of overall LN metastasis[17]. Koufuji et al[18] investigated 49 cases with an upper gastric cancer invading the esophagus who underwent surgical treatment. The incidences of LN metastasis were 0% for T1, 67% for T2, 81% for T3 and 80% for T4. Ichikura et al[19] retrospectively analyzed 65 cases with cardiac carcinoma and found that the incidences of LN metastasis were 68% for Siewert’s type II tumors, and 94% for Siewert’s type III tumors. In the present study, 82.2% of patients had LN metastasis. For these patients, it is better to determine the extent of lymphadenectomy according to the extent of LN metastases preoperatively or intraoperatively. However, this is difficult to achieve as there is lack of reliable measures for clinical diagnosis preoperatively and for comprehensive LN biopsy intraoperatively[2021]. If the LNs were not completely removed, the probability of residual tumor cells would increase, leading to poor prognosis. Therefore, some investigators advocated removing adequate LNs intraoperatively to avoid this situation[22–24]. However, it is not certain how many LNs need to be dissected in a D2 lymphadenectomy. Liu et al[25] showed, in 147 patients with adenocarcinoma of the stomach who had undergone gastrectomy with curative intent, that for stage III disease, removal of >15 LNs appeared to provide a considerable survival advantage, compared with removal of < 15 LNs. Another study favoring this opinion was from Barbour et al[26]. They suggested that patients with Siewert type II and III adenocarcinoma of the gastroesophageal junction (GEJ) should undergo adequate lymphadenectomy to permit examination of ≥ 15 LNs, allowing accurate identification of prognostic variables. Removal of ≥15 LNs is associated with more accurate survival estimates for patients with advanced disease. For adenocarcinoma of the GEJ, a minimum removal of 25 LNs was recommended by Gee et al[27]. Our present observations showed that better long-term survival outcomes were obtained with higher numbers of LNs resected during D2 lymphadenectomy. This is consistent with the research results of Schwarz et al[28]. We suggest that for adequate LN resection, including total LNs and the number of negative LNs, the removal of 20 LNs for stage II, 25 LNs for stage III, 30 LNs for stage IV and 15 LNs for the entire cohort be recommended during D2 radical dissection.

Total LNs and number of negative LNs can reflect the extent of LN dissection and influence survival[2930]. In the present study, total LN count or negative LN counts turned out to be independent protective factors, according to the symbols of regression coefficient. These two factors behaved interchangeably, and maintained a similar significance level when substituted for each other. Furthermore, an impact of total LNs or negative LNs on survival was observed. In the univariate survival analysis, higher total LN counts may translate into better outcomes. The effect was much more significant with T4 and N2, N3 disease. We thus postulate that even in locally advanced disease with adjacent organ invasion or advanced nodal involvement that is still resectable, adequate LN dissection influences survival.

The contribution of negative LN counts to the prognosis of patients is partly due to LN microme-tastases. In patients without lymph metastases identified by HE staining, about 20% had LN micrometastases[31]. del Casar et al[32] reviewed 144 patients with primary gastric adenocarcinoma who underwent surgery and found that lymphatic and/or blood vessel tumoral invasion (LBVI) was present in 46 patients (31.9%), which was significantly associated with a poorer overall patients’ survival. Therefore, curability was reported as one of the most reliable predictors of long-term survival for LN-negative gastric carcinoma patients[33]. A similar study[34] examined the impact of the number of negative LNs on survival. The study was conducted in patients with stage III colon cancer, and demonstrated that a higher number of negative nodes was associated with better survival. In our study, the impact of negative LN on survival in these stage patients also showed an obvious trend toward better survival for higher negative LN counts. For every ten extra LNs added to the negative LN count, the calculated overall survival increased by 6.09% for stage III, and 7.65% for stage IV patients, based on the linear regression. Generally, better long term survival was observed with higher total LNs or negative LNs, showing the contribution of sufficient lymphadenectomy toward reducing residual tumor cells. For the curative-intent gastrectomy of locally advanced disease, retrieval and examination of adequate numbers of LNs is suggested for gastric cancer located in the cardia and fundus.

The incidence rates of upper third gastric cancer, mostly located in the cardia and fundus, has increased in recent years. Few studies have investigated the relative contributions of both the number of total resected lymph nodes (LNs) and the number of negative LNs to the outcome of patients with advanced gastric cancer located in the cardia and fundus.

Some researches have considered D2 radical dissection to be standard procedure for advanced gastric cancer located the cardia and fundus, which requires the removal of Group 1 and Group 2 LNs. The dissected LN count is found to have strong association with patient survival.

The authors retrospectively reviewed 236 patients with gastric cancer in the cardia and fundus who were treated with D2 radical resection in a hospital in Fujian between 1996 and 2002 to investigate how the numbers of dissected LNs affect patients’ survival outcomes.

The authors suggest that importance should be attached to removing enough LNs so as to reduce residual tumor cells in patients with advanced gastric cancer located in the cardia and fundus.

This article demonstrated that in advanced gastric cancer located in the cardia and fundus, the number of lymphadenectomy with/without metastasis of gastric cancer cells influenced the prognosis of the patients. This finding has important information for gastrointestinal surgeons.