AIM: To discuss the possible effect of PTEN gene mutations on occurrence and development of gastric cancer.

METHODS: Fifty-three gastric cancer specimens were selected to probe PTEN gene mutations in genome of gastric cancer and paracancerous tissues using PCR-SSCP-DNA sequencing method based on microdissection and to observe the protein expression by immunohistochemistry technique.

CONCLUSION: PTEN gene mutation and expression may play an important role in the occurrence and development of gastric cancer.

The occurrence and development of gastric cancer, like other malignant tumors, are a complicated process involving participation of polygene and many factors[1–4]. It is generally considered that protein tyrosine phosphatase level plays an important role in the process. Mutation of the PTEN gene encoding for protein tyrosine phosphatase and abnormal expression of protein are significantly correlated with the occurrence and development of malignant tumors such as glioblastoma, prostate cancer, malignant melanoma, and breast cancer, etc[5–11]. However, only few studies are available on PTEN gene mutation and protein expression in gastric cancer[312–15]. The aim of this study was to detect the PTEN gene mutation in gastric cancer and paracancerous tissue from 53 patients by PCR-SSCP-DNA sequencing method and to observe the protein expression by immunohistochemistry technique in order to find the effect of PTEN gene on the occurrence and development of gastric cancer.

Fifty-three gastric cancer and corresponding paracan-cerous normal tissue samples were obtained at surgery. All the samples were formalin fixed, paraffin embedded, and pathologically confirmed. Of the 53 patients, 41 were males and 12 were females with a mean age of 65.6 years, ranging 39-81 years. The tumor diameter was greater than 3 cm in 37 patients. The tumor was located in gastric antrum of 30 patients, in gastric body of 16 patients, and in gastric cardia of 7 patients, respectively. Invasion was restricted in mucosa and submucosa of 2 patients (I), in muscular layer of 12 patients (II), in chorion and subchorion of 15 patients (III), in neighboring organs of 24 patients through chorion (IV). Lymph node metastasis was found in 32 patients, distant metastasis in 8 patients, embolization in 45 patients. Well-differentiated tumor was found in 1 patient, moderately-differentiated tumor in 35 patients, and poorly-differentiated tumor in 27 patients. pTMN stage I was identified in 13 patients, stage II in 6 patients, stage III in 26 patients, and stage IV in 8 patients.

Three paraffin slices (7 &mgrm) were dried in a galvano-thermy box at 60°C for 30 min, hydrated in gradient ethanol after deparaffinized in dimethylbenzenel, adequately rinsed with tap water and naturally dried. Necrotic tissues were removed under inverted microscope and no carcinoma cells were found in para-cancerous tissues. Gastric cancer and paracancerous tissues were put into a 1.5 mL eppendorf tube into which 50 &mgrL digest buffer solution was added. The tube was overturned several times to blend it adequately, bathed in water for 8 h at 65°C and shaken several times. Protein enzyme k was deactivated at 95°C for 8 min and then centrifuged at 10 000 r/min for 10-15 min. Transfer supernatant, namely genome DNA, was transferred to another antisepsis tube and stored at 4°C for application.

PCR amplification of sequence of exons 5-8 in PTEN gene

Enzyme cut reaction with Taq I

Enzyme cut reaction is composed of 3.2 &mgrL ddH2O, 1.5 &mgrL buffer Taq I, 10.0 &mgrL PCR, 0.3 &mgrL Taq I (10 unit/&mgrL), and a total volume of 15.0 &mgrL. The mixture was centrifuged for 15 s and heated for 3.5 h at 65°C. Ten &mgrL enzyme cut product was put on a 2% agarose gel containing 0.5 g/L EB, 100 bp DNA ladder as a standard reference, electrophoresed for 45 min at 100 V. The results were observed with an ultraviolet transmission reflect analysis instrument and photo was taken with an automatic gel documentation system to evaluate the enzyme cut reaction.

Eight percent neutral polyacrylamide gel electrophoresis was performed as previously described[16]. In brief, 3 mL 40% acrylamide solution, 3 mL 5 × TBE solution, 3 mL 50% glycerin, 6 mL ddH2O, 75 &mgrL 10% ammonium persulfate, 7 &mgrL TEMED, were blended adequately and poured into the gel, then concreted for 1 h at room temperature. Four &mgrL PCR product (eighth exon enzyme cut product of exon 8) and 6 &mgrL formamide sample were mixed. The mixture was centrifuged for 15 s, denatured at 95°C for 10 min, bathed in ice for 10 min, put on an 8% neutral polyacrylamide gel, and electrophoresed with 1 × TBE buffer for 8 h at 14°C and 300 V. The fixation solution was infused into a flat utensil, into which gel was immerged, vibrated for 10 min, and washed 3 times (2 min each time) with ddH2O. The gel was immerged into a staining solution, vibrated for 10 min, washed 3 times (20 s each time) with ddH2O. The gel was then immerged into a display solution, vibrated until the sample signal became brown and the background became transparent yellow, and rinsed with tap water to stop display. The staining results were observed and photographs were taken.

According to the PCR-SSCP results of genome DNA, the difference in the single strand strip number and electrophoresis transference location, also known as the mobility shift, was considered PCR-SSCP positive.

Genome DNA from positive PCR-SSCP samples was amplified again in 80 &mgrL reaction system. The product was identified by electrophoresis for bidirectional DNA sequencing.

Detection of the PTEN gene exons 5-8 of genome DNA in 53 paired gastric cancer and paracancerous tissue samples indicated that the amplified PCR product had no gene homozygous alteration and no large and/or alteration in the alleles.

Ten &mgrL reaction product of PCR amplified exon 8 and Taq I enzyme cut reaction on a 2% agarose gel containing 0.5 g/L EB, 100 bp DNA ladder were used as a standard reference. The results indicated that the number and size were in accordance with the theory. The 281 bp, 247 bp, 30 bp segments were relatively justified as the complete enzyme cut reaction. 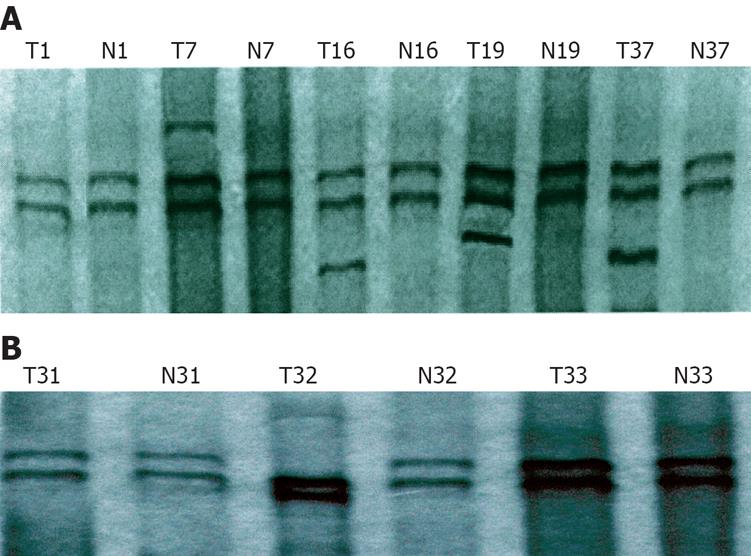 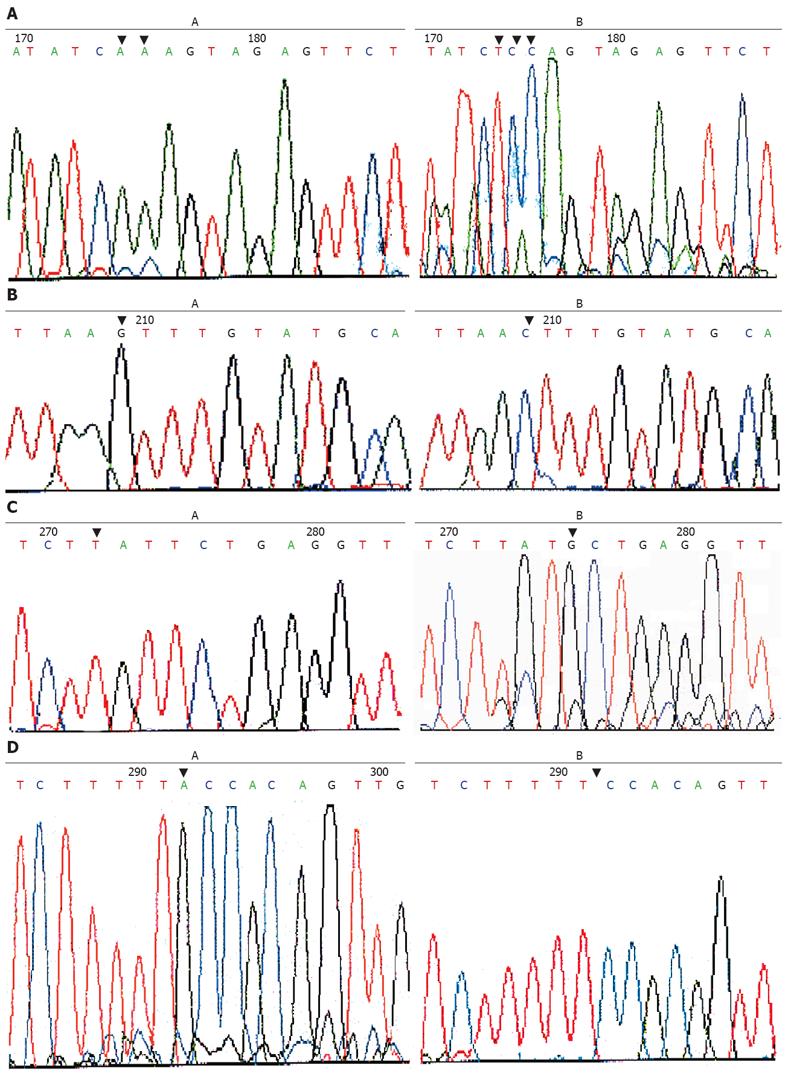 PTEN expression was not significantly correlated with the clinicopathological parameters in gastric cancer patients, such as gender and age of the patients, location and size of the carcinoma, distant metastasis, and embolization (P > 0.05), but was significantly correlated with infiltrating depth, lymph node metastasis, and pTMN staging (P < 0.05, Table 3). There was also a significant difference between the moderate and high differentiation groups (P < 0.005, Table 1).

Protein tyrosine phosphatase level, one of the multi-factors interacting in the period of normal cell growth and division, is determined between protein tyrosine kinase and protein tyrosine phosphatase. The imbalance between the two enzymes affects cell signal transference and cell division, thus leading to malignance of the cells. The occurrence and development of gastric cancer, as other malignant tumors, are an uncontrolled growth and differentiation process of multi-factors involving participation of many genes, including mutation and/or low expression of tumor suppressor gene. At present, researches on structure alteration of tumor suppressor genes in tumor tissues and tumor cell lines, including point mutation, deletion, insertion, cut point, etc, indicate that the mutation rate of tumor suppressor genes is 33%-50% in endometrial cancer, 25% in glioblastomas, 21% in ovarian cancer, 13% in prostate cancer, less than 5% in breast and thyroid cancer[5–11].

In order to identify the exact role of PTEN mutations in occurrence and development of gastric cancer, we used PCR-SSCP-DNA sequencing technique to isolate cancer cells from non-cancer cells to study the sequences of exons 5-8 and certain introns which are frequently mutated. The results indicate that the total mutation rate was 9.4% (5/53), with 3 mutations in introns, including a G-C point mutation at 91 bp upstream, a T-G point mutation of at 24 bp upstream, and a single base A mutation at 7 bp upstream of 5’ lateral exon 5. The other AA-TCC mutation was found at 40 bp upstream of 3’ lateral exon 7, leading to terminator formation in codon of the PTEN gene and pre-termination of the open read frame with the PTEN protein product lacking of the C end that regulates the stability and activity of PTEN protein. Therefore, this mutation may play an important role in the occurrence and development of gastric cancer. The mutation in introns may have effects on the differentiated cut of PTEN transcription product due to the 3 point mutations in introns of the PTEN gene.

In the present study, the mutation rate of gastric cancer was 9.4% (5/53), suggesting that except for gene mutations, other mechanisms are involved in the descending process of PTEN protein expression, such as over methylation of nucleotides C and G in promoter or enhancer. Abnormal methylation of CpG islands in promoter is considered one of the important mechanisms underlying gene deactivation and accumulation. The abnormal methylation is considered one of the main pathways promoting occurrence of gastric cancer because over methylation of tumor suppressor genes or other tumor-related genes, such as Rb, APC, p16, p15, hMLH1, E-cadherin, are found in malignant tumors. Another cause might be the abnormal regulation of PTEN protein decomposition pathways. Analysis of PTEN protein structure revealed that there were two homologous PESTs and one PSD-95/Dig/20-1 (PDZ) binding module at the C end of PTEN protein. Deletion or structure alteration in the region might result in PTEN protein prone to be decomposed. Because the total length of PTEN gene DNA is 218 bp including 9 exons and 8 introns, the exact mutation rate of the PTEN gene might be higher than 9.4%. The results of this study indicate that expression and mutation of the PTEN protein play an important role in the occurrence and development of gastric cancer.

It was reported that inactivation of PTEN induces infiltration and metastasis of tumors[23–28]. PTEN restrains attack and metastasis of tumor cells by regulating matrix metalloproteinases (MMPs) and vascular endothelial growth factor (VEGF)[29]. Abnormal expression of PTEN protein increases synthesis of MMPs and VEGF, thus leading to attack and metastasis of tumor cells. PTEN can also selectively increase dephosphorylation of focal adhesion kinase (FAK) to reduce cell transference by phosphated FAK[2530–32]. Besides, PTEN protein and tensin have a homologous sequence[33]. Tensin is a cell matrix protein, which participates in adhesion to cells and extracellular matrix (ECM). Our study showed that PTEN could restrain cell transference as tensin.

The occurrence and development of gastric cancer, like other malignant tumors, are a complicated process involving participation of polygene and many factors. It is generally considered that protein tyrosine phosphatase level plays an important role in the process. Mutation of the PTEN gene encoding for protein tyrosine phosphatase and abnormal expression of the PTEN protein are significantly correlated with the occurrence and development of malignant tumors, such as glioblastoma, prostate cancer, malignant melanoma, and breast cancer.

Discovery of the PTEN gene is another important landmark in the field of anti-oncogenes. The relationship between PTEN gene and gastric carcinoma was analyzed for the genetic structure, expression and interaction with other genes in this study.

Few studies on PTEN gene mutation and protein expression in gastric cancer are available. However, cancer cells have not been isolated from normal cells that may lead to undetectable PTEN gene mutations because of plenty of normal genome DNAs.

PTEN protein phenotype can be used as an object index to judge the action of gastric carcinoma based on the cancer cells isolated from normal cells. In this study, we researched the PTEN gene mutations using PCR-SSCP-DNA sequencing technology, which can increase the detection rate of PTEN gene mutation, suggesting that it can be extended to research other tumor-related genes.

This article describes mutation of the PTEN gene in patients with gastric carcinoma. The results indicate that PTEN gene plays an important role in the occurrence and development of gastric cancer.

Zabei Medical Science and Technology Foundation of Shanghai, No. grant 200701