Epithelial-mesenchymal transition (EMT) is a highly conserved process that has been well characterised in embryogenesis. Studies have shown that the aberrant activation of EMT in adult epithelia can promote tumour metastasis by repressing cell adhesion molecules, including epithelial (E)-cadherin. Reduced intracellular adhesion may allow tumour cells to disseminate and spread throughout the body. A number of transcription proteins of the Snail superfamily have been implicated in EMT. These proteins have been shown to be over-expressed in advanced gastrointestinal (GI) tumours including oesophageal adenocarcinomas, colorectal carcinomas, gastric and pancreatic cancers, with a concomitant reduction in the expression of E-cadherin. Regulators of EMT may provide novel clinical targets to detect GI cancers early, so that cancers previously associated with a poor prognosis such as pancreatic cancer can be diagnosed before they become inoperable. Furthermore, pharmacological therapies designed to inhibit these proteins will aim to prevent local and distant tumour invasion.

Epithelial-mesenchymal transition (EMT) is a well-characterised embryological process that has been considered to play a vital role in tumour progression[1–5]. EMT has been shown to occur during gastrulation, as well as during the development of the neural crest, heart and the musculoskeletal system[6]. In the process of EMT, epithelial cells undergo a phenotypic switch to form mesenchymal cells that are similar in appearance to fibroblasts[23]. The change in cell type results in the loss of polarity and also the loss of tight intracellular adhesions maintained by epithelial cells via adherens junctions[1–3]. This is thought to allow dynamic cellular migration and increase embryogenic diversity[5]. However, in vitro evidence has outlined a role for the aberrant induction of EMT in adult epithelia during tumour metastasis[67]. In primary tumours, the induction of EMT can lead to structural changes involving cell adhesion molecules, and in particular epithelial-cadherin (E-cadherin)[8–10]. E-cadherin is a transmembrane glycoprotein that is localised in the adherens junction typically found in epithelial cells, and plays an important role in maintaining the structural integrity of epithelial sheets[11]. The loss of E-cadherin expression has been reported in several GI cancers including advanced colorectal carcinomas, oesophageal adenocarcinomas, gastric and pancreatic cancers[12–15]. Interestingly, experiments used to silence the expression of E-cadherin not only showed a morphological shift from an epithelial to a fibroblastoid phenotype, characteristic of EMT, but also a concomitant increase in invasive cell behaviour[16]. The loss of E-cadherin has been considered to augment cellular dissemination and tumour metastasis.

The mechanisms by which E-cadherin has been shown to be inactivated include gene mutations, promoter hypermethylation, chromatin remodelling, post-translational modification and transcriptional repression[17–19]. The major proteins implicated in the transcriptional repression of E-cadherin include the zinc finger proteins Snai1 (Snail) and Snai2 (Slug), δEF (ZEB-1), Smad interacting protein 1 (SIP1) or ZEB-2, and a basic helix-loop-helix (bHLH) protein called Twist[20–22]. Snail was initially described in Drosophila melanogaster and was shown to be essential for dorsal-ventral patterning and mesoderm formation[23]. Knockout studies revealed that mice lacking the Snail gene died at gastrulation due to defective EMT[24]. Snail was found to down-regulate epithelial markers such as claudins, occludens, desmoplakin and cytokeratins, in addition to E-cadherin, and up-regulate mesenchymal markers including fibronectin and vitronectin during EMT[2526]. Its homologue, Slug was discovered in developing chick embryos, and was found to be abundantly expressed in cells undergoing EMT in the primitive streak, neural crest and other mesenchymal tissue[26]. Over expression of Slug in mice induced the formation of mesenchymal tumours that were mainly leukaemias and sarcomas[27]. It was discovered that both Snail and Slug are able to bind directly to E-box motifs (CANNTG) on target gene promoters, and in particular the CDH1 gene in order to down-regulate E-cadherin expression[20]. The zinc finger proteins ZEB-1 and SIP1 were also shown to be able to repress E-cadherin by binding to similar DNA sites as Snail on the E-cadherin promoter region[28]. Furthermore, microarray analysis revealed Twist as another strong candidate for the acquisition of invasive properties of tumour cells, although its mechanism of action is less clear[22].

Cancers of the upper GI tract, including oral, oesophageal and gastric tumours, are associated with significant mortality worldwide[29–31]. Tumours arising in the oral cavity are predominantly squamous cell carcinomas (SCC) in origin and have a tendency to spread rapidly[32]. Oral cancer accounts for around 197 000 deaths each year, throughout the world[33]. E-cadherin expression in normal oral mucosa, compared to pre-cancerous oral lesions and primary oral SCC has been shown to be sequentially lower in each of these stages, respectively[34]. Moreover, Snail-mediated repression of E-cadherin has been confirmed in oral SCC cell lines[35]. Further analysis of primary and recurrent oral SCC, showed that the over-expression of Snail in the primary oral SCC lead to ZEB-1 and SIP1 up-regulation with a concomitant loss of E-cadherin[36]. This expression profile, now matching that of the recurrent oral SCC, may suggest that Snail is able to regulate the function of other E-cadherin repressors such as ZEB-1 and SIP1 in oral SCC.

Repression of E-cadherin has also been reported for advanced human oesophageal cancers[37]. These tumours are known to be particularly aggressive and have a 5-year survival rate of around 8% in the United Kingdom[38]. Oesophageal cancer is histologically divided into squamous cell carcinomas and adenocarcinomas. Oesophageal SCC commonly arises in the upper third of the oesophagus and its predominant aetiological factors include alcohol and nicotine abuse[39]. Analysis of tissue samples from patients with oesophageal SCC suggests that Snail is associated with repressed E-cadherin expression in these primary tumours[40]. In addition, Slug has been shown to be over-expressed in primary oesophageal SCC, correlating with depth of tumour invasion, lymph node metastasis and poorer clinical outcome[41]. Similarly, evaluation of Twist in oesophageal SCC revealed significantly higher Twist expression relative to non-neoplastic tissue[42].

Colorectal cancer (CRC) is the third most common malignancy worldwide[54]. Its pathogenesis is characterised by clinical and histopathological changes known as the adenoma-carcinoma sequence, where normal colonic epithelium becomes hyper-proliferative and forms adenomatous polyps that progress to malignant disease[55]. The adenoma-carcinoma sequence is considered to occur as a result of sequential genetic changes involving defined oncogenes and tumour suppressor genes, as proposed by Fearon and Vogelstein in 1990[56]. Several studies have reported mutations of the tumour suppressor adenomatous polyposis coli (APC) gene in CRC[57–59]. These mutations are amongst the earliest genetic events found in the majority (up to 80%) of sporadic cases of CRC[6061]. The main tumour suppressor function of APC has been shown to be in its ability to mediate the proteosomal degradation of intracellular β-catenin, a key member of the Wnt signalling cascade[62]. Physiologically, Wnt factors are able to induce the stabilization of cytosolic β-catenin, which then associates with T cell factor/lymphoid enhancer factor-1 (TCF) proteins in the nucleus to initiate the transcription of Wnt target genes[61–63]. These include genes such as c-myc, cyclin D1, Ephrin B2 and matrilysin[63]. In CRC, mutations of both APC and β-catenin (in 10% of cases) cause deregulation of intracellular β-catenin levels which leads to the nuclear accumulation of β-catenin[62]. This causes aberrant and constitutive expression of Wnt target genes, and thus the development of CRC[63]. Interestingly, β-catenin can also interact with the cytoplasmic domain of E-cadherin, providing a link to the actin cytoskeleton via its binding to α-catenin[64]. However, it is unclear whether the loss of this interaction with β-catenin, in more aggressive forms of CRC where E-cadherin is down-regulated, promotes TCF-dependent transcription[65].

Several mechanisms of E-cadherin repression have been reported in CRC, including gene mutations and promoter hypermethylation. However, transcriptional repression of E-cadherin and associated up-regulation of Snail is also considered to play a role in the progression of CRC[66–68]. Analysis of Snail in human CRC has shown that 78% of the tumour samples examined over-expressed this protein[68]. Slug expression has been shown to be positive in 37% of cases of primary CRC, which correlated significantly with metastatic spread of the cancer[69]. Evidence for ZEB-1, SIP1 and Twist-mediated repression of E-cadherin has not yet been established in CRC[70].

OTHER SOLID TUMOURS OF THE GASTROINTESTINAL SYSTEM

Pancreatic cancer confers possibly the worst prognosis of the GI cancers, since it presents very late[7172]. Evidence suggests that both Snail and Slug are over-expressed in pancreatic tumours[72]. A recent study explored Twist expression in invasive ductal carcinoma (IDC) of the pancreas and its associated pre-malignant lesion intraductal papillary mucinous neoplasia (IPMN). Although it was limited by sample size, Twist expression was found to be significantly higher in IDC compared to matched non-tumourous and IPMN samples[73]. SIP1 expression has also been shown to be raised in pancreatic tumours[74].

Studies have also reported the over-expression of Snail in Hepatocellular carcinomas (HCC)[7576]. Twist expression has also been shown to be raised in HCC, which correlates with the metastatic potential of this type of tumour[77]. Miyoshi et al outlined the role of SIP1 in HCC by showing that transfection of SIP1 into HCC cell lines induced cellular dedifferentiation as well as E-cadherin repression. Vimentin and fibronection, along with various matrix metalloproteinases (MMPs), were also up-regulated, and it was hypothesised that MMP up-regulation augments SIP1-induced HCC progression[78].

EMT is a context dependent process that is considered to be involved in the progression of GI tumours[5–7]. Snail and associated repressors of E-cadherin have been implicated in EMT, and the evidence for their role in GI cancer is summarised in Figure 1. Transcriptional repressors of E-cadherin may be useful therapeutic targets for the prevention of local invasion and distant metastasis in GI malignancies. Inhibition of these proteins may also, for the first time, allow early detection of GI cancers associated with a fatal prognosis such as pancreatic cancer to enable early intervention and avoid the situation where this type of cancer becomes inoperable. The same principle can also be applied to other pre-malignant lesions such as Barrett’s metaplasia to improve the management of oesophageal adenocarcinomas. However, it is important to consider that these transcriptional repressors of E-cadherin, or EMT regulators, also have other cellular functions. Both Snail and Twist have been associated with anti-apoptotic functions and Snail has also been implicated in cell adhesion and migration[7980]. Furthermore, some evidence suggests that the expression of E-cadherin is higher in metastatic foci, such as in CRC, thus the reverse process of EMT, or mesenchymal-epithelial transition (MET), may be required in the formation of distant metastases[8]. Therefore, the grade and location of different GI cancers will also need to be considered before commencing any pharmacological treatment targeting regulators of EMT. 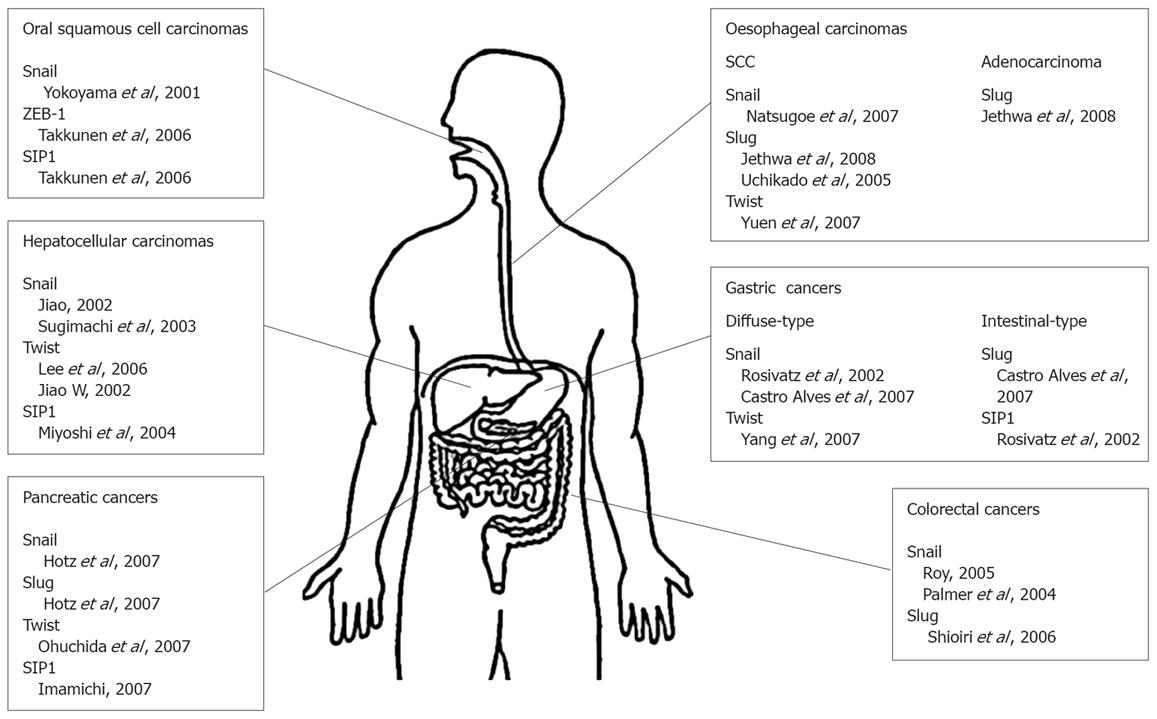 Figure 1 Evidence for the role of EMT regulators in gastrointestinal cancer.

Future studies should also consider the various signalling molecules that activate EMT, including the Epidermal growth factor (EGF) family members, Fibroblastic growth factors (FGF), Insulin-like growth factors (IGF), bone morphogenic proteins (BMP) and Wnt factors[79]. It is necessary to explore the interactions between these molecules, their signalling pathways, and the Snail super-family of proteins in GI tumours. This may allude to novel combined treatment regimes to improve clinical outcome. Whilst it is clear that Snail and associated regulators of EMT are implicated in GI carcinogenesis, the role of EMT in cancer is further complicated by the fact that a number of novel EMT regulators have been identified, including molecules such as MMP-3, Met, Goosecoid, Kaiso, TGF-β, FOXC2, GSK3β, Smad-3, Pez and ILK[4]. Additional research is required to support the growing literature regarding the process of EMT, in order gain full insight into its role in GI cancer progression.