AIM: To compare the demographic and clinical features of different manometric subsets of ineffective oesophageal motility (IOM; defined as ≥ 30% wet swallows with distal contractile amplitude < 30 mmHg), and to determine whether the prevalence of gastro-oesophageal reflux differs between IOM subsets.

RESULTS: Patients in the IOM subset featuring a majority of low-amplitude simultaneous contractions (LASC) experienced less heartburn (prevalence 26%), but more dysphagia (57%) than those in the IOM subset featuring low-amplitude propagated contractions (LAP; heartburn 70%, dysphagia 24%; both P≤ 0.01). LASC patients also experienced less heartburn and more dysphagia than patient controls (heartburn 68%, dysphagia 11%; both P < 0.001). The prevalence of heartburn and dysphagia in IOM patients featuring a majority of non-transmitted sequences (NT) was 54% (P = 0.04 vs LASC) and 36% (P < 0.01 vs controls), respectively. No differences in age and gender distribution, chest pain prevalence, acid exposure time (AET) and symptom/reflux association existed between IOM subsets, or between subsets and controls.

CONCLUSION: IOM patients with LASC exhibit a different symptom profile to those with LAP, but do not differ in gastro-oesophageal reflux prevalence. These findings raise the possibility of different pathophysiological mechanisms in IOM subsets, which warrants further investigation.

The term ineffective oesophageal motility (IOM), the most common variant of oesophageal dysmotility, was introduced in 1997 to replace the term “non-specific oesophageal motility disorder”[1], as the former term appears to better reflect the functional and clinical relevance of manometric alterations[23]. IOM is defined manometrically as ≥ 30% of swallow sequences with a contractile amplitude < 30 mmHg in the distal oesophagus[4]. Such a definition, however, encompasses three abnormal contractile patterns, namely low-amplitude propagated contractions (LAP), low-amplitude simultaneous contractions (LASC), and non-transmitted contractions. IOM is, therefore, diagnosed if there is a combination of these abnormal contractile patterns.

It is not known if the predominant oesophageal symptom (heartburn, dysphagia, chest pain) experienced by IOM patients is associated with the predominance of one of these ineffective manometric patterns. In addition, although gastro-oesophageal reflux disease (GORD) has been associated with IOM[5–7], it is not known whether particular manometric subsets of IOM display a higher prevalence of GORD.

A total of 100 consecutive patients (73 females, mean ± SD age 56 ± 18 years) were studied. Patients with oesophageal symptoms were referred to the Gastrointestinal Investigation Unit of the Royal North Shore Hospital. All patients fulfilled the current manometric criteria for IOM: ≥ 30% of wet swallows with low-amplitude propagated sequences (distal contractile amplitude < 30 mmHg), LASC, or non-transmitted contractions[4]. Swallow sequences were considered to be simultaneous when propagation velocity was > 8 cm/s between two or more manometric channels, and were considered to be non-transmitted when contractile amplitude was ≤ 10 mmHg at any site. A group of 100 age- and gender-matched patients (73 females, age 56 ± 20 years) referred with oesophageal symptoms, but exhibiting normal oesophageal manometry[8] served as a patient control group. Patients in the two groups had undergone upper gastrointestinal endoscopy and/or barium studies to exclude structural disease of the oesophagus, apart from the presence of reflux oesophagitis and sliding hiatus hernia. Patients with systemic diseases that could alter oesophageal motility, such as diabetes mellitus or scleroderma, were excluded. The study was approved by the Human Research Ethics Committee of the Northern Sydney Area Health Service.

A standardized symptom assessment was completed by all patients. This assessment comprised the Rome II Integrative Questionnaire[9] with an additional evaluation of oesophageal symptoms. This additional evaluation determined the predominant (i.e. most troublesome) oesophageal symptom (heartburn, dysphagia, chest pain, or others)[10] and the time period since its first appearance. The usual intensity, frequency, and duration of all reported symptoms were assessed, and symptom severity scores for heartburn, dysphagia, and chest pain were calculated as the product of these intensity, frequency, and duration data.

All patients were studied after an overnight fast. Oesophageal manometry was performed using an eight-channel DentSleeve water-perfused manometric catheter with an external diameter of 4.5 mm (DentSleeve Pty. Ltd., Belair, SA, Australia) and a computer-based data acquisition and charting system (Acquidata, Neomedix Systems, Warriewood, NSW, Australia). The catheter was introduced transnasally and swallowing was recorded via a port positioned in the pharynx, 25 cm above the proximal end of the hydraulic sleeve segment of the catheter. Oesophageal contractions were measured by ports located 5, 10, 15, and 20 cm above the proximal end of the sleeve and gastric pressure by a side hole 1 cm below the distal end of the 6 cm long sleeve. Each patient made approximately 10 swallows, each of 5 mL water of room temperature, in the seated position to acclimatize to the procedure. The patient was then placed in the supine position, and a minimum of 10 supine water swallows, each of 5 mL water, with at least 30 s in between swallows, were performed. A station pull-through technique was then used to accurately locate the position of the lower oesophageal sphincter (LOS). The LOS function was assessed by measuring mid-respiratory LOS resting pressure and swallow-induced LOS relaxation[8].

A subset of patients (54 IOM, 72 patient controls with normal manometry) underwent an ambulatory oesophageal pH study. A probe with an antimony pH sensor (Flexilog, Oakfield Instruments Ltd., Eynsham, England) was introduced transnasally and the sensor was positioned 5 cm above the upper edge of the LOS, which was determined manometrically as described above. The probe was connected to a data logger (Digitrapper Mark II, Synectics, Sweden), which sampled pH at 5-s intervals for approximately 24 h. Mealtimes, symptom events, and supine periods were recorded in a patient diary. The computerized analysis (Esophagram, Synectics, Sweden) included the percentage of time pH was below 4 (Acid Exposure Time, AET)[11], and the symptom association probability (SAP)[12] was calculated when possible.

Statistical analysis: Results are presented as mean ± SE, unless otherwise stated. χ2 and Fisher’s exact tests were used to determine differences in gender distribution between symptom subgroups, and differences in symptom prevalence between manometric subsets. Age differences between subsets, and between IOM patients and patient controls, were determined via Kruskal-Wallis tests with post-hoc Mann-Whitney U comparisons. Similarly, differences between symptom subgroups in proportions of contractile abnormalities and in LOS pressure and AET were determined via one-way analysis of variance (ANOVA) with post-hoc Scheffe tests. Correlation and regression analysis was used to describe relationships between variables. All analyses were performed using the SPSS statistical program (Release 14, SPSS Inc., Chicago, IL), with P < 0.05 considered significant.

RESULTS
Analysis based on the predominant symptom

There were no significant differences in gender and age distribution, and in time period since symptom onset, between the three symptom subgroups in IOM (Table 1). 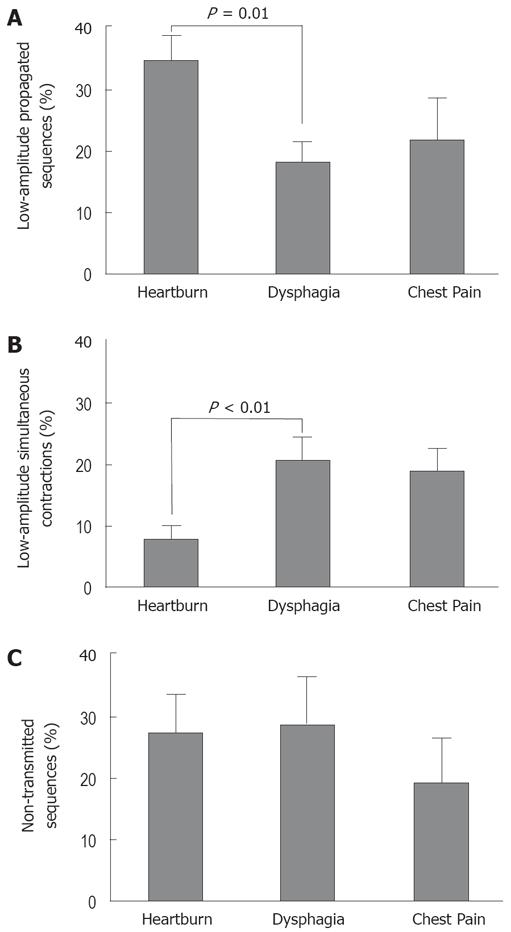 Figure 1 Proportions of low-amplitude propagated sequences (A), LASC (B), and NT (C) in the three predominant symptom subgroups. Proportions are expressed as (mean ± SE) % of total swallows.

Ambulatory pH data: The gender and age distribution of the patients who underwent a pH study closely reflected that of the total subject pool, and mean LOS pressures of subgroups were almost identical to those of the total subject pool. There were no significant differences between the three subgroups in terms of AET or proportion of patients with an abnormal AET, or proportion with significant SAP values.

Analysis based on predominant contractile abnormality

Predominant symptoms: Figure 2 shows the distribution of predominant symptoms for the three manometric subsets and for patient controls. Heartburn was highly prevalent (70%) in the LAP subset, but was significantly less common (26%) in the LASC subset. Conversely, dysphagia was more prevalent in LASC (57%) than in LAP (24%) (χ2 tests). There were no significant differences between IOM subsets, however, in severity scores for heartburn, dysphagia or chest pain, or in time since the onset of the primary symptom. 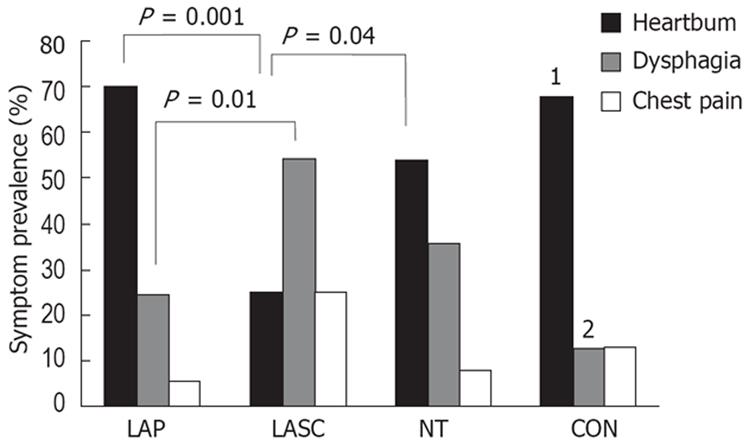 Despite almost 10 years of usage of the category IOM, and recent studies evaluating IOM with combined intraluminal impedance and manometry[3], the extent to which the various contractile patterns of IOM differ according to the predominant symptom has remained largely unexplored. Our study in a large patient cohort shows that IOM is indeed a heterogeneous clinical entity with regard to the predominant symptom reported. We focused on the type of contractile abnormality, rather than solely considering the contractile amplitude. The novel finding was that two specific contractile patterns, namely LASC and LAP, were closely related to predominant dysphagia and predominant heartburn, respectively. Additional analyses provided further support for these findings in that as the proportion of LASC increased, the dysphagia severity score also increased. Consistent with these findings, there were notable differences in symptom distribution between IOM manometric subsets, categorized according to the most frequent type of contractile pattern in an individual patient. Differences were particularly prominent between patients with low-amplitude propagated sequences and those with LASC; the latter experienced more dysphagia and less heartburn than the former patients.

In the subset of IOM patients with mainly non-transmitted swallow patterns, it is feasible that this pattern could represent an evolving achalasia-like dysmotility, although these patients exhibited only a modest prevalence of dysphagia. As long-term follow-up of IOM patients has scarcely been reported[21], findings regarding disease progression remain inconclusive, and further studies are needed.

Neither the prevalence nor the severity of gastro-oesophageal acid reflux differed between IOM subsets. In addition, we found no significant differences in symptom/reflux association or heartburn severity score between IOM subsets, despite some differences in LOS resting pressure. A low LOS tone and transient LOS relaxation[22] are regarded as the main mechanisms of gastro-oesophageal reflux. As the LOS tone was lower in IOM patients with low-amplitude propagated sequences compared with patient controls, and heartburn prevalence was highest in this IOM subset, these patients could be expected to have the highest acid exposure. This was not the case, and our findings are consistent with those of Lemme et al, who found that the proportion of low-amplitude swallows did not differ between IOM patients with erosive versus non-erosive GORD[23]. It is feasible that the presence of propagating (albeit low-amplitude) sequences equates to more efficient clearance[24] of refluxate in these patients, and novel approaches to stimulating clearance[25] may prove beneficial in this IOM subset. Another explanation for the high heartburn prevalence is that these patients exhibit oesophageal hypersensitivity[26]. Despite the lack of difference in acid exposure between IOM subsets, pooled analyses of all IOM patients showed that a low LOS tone was associated with both high heartburn severity scores and high AETs. These findings indicate the complex interactions between LOS characteristics, oesophageal body dysfunction and symptomatology in IOM patients with gastro-oesophageal reflux, which require further investigation.

The current study focused primarily on oesophageal body dysmotility in IOM. LOS swallow-induced relaxation is assessed via manometry, but does not feature in the diagnosis of IOM. Conchillo et al have recently shown that, in addition to inadequate LOS relaxation, a shorter duration of LOS relaxation could contribute to abnormal bolus transit in IOM patients[27]. This might represent an additional manometric discriminator of dysmotility, and warrants further investigation.

In summary, we have examined subsets of IOM patients based on symptoms and manometrically-determined oesophageal body dysmotility. These subsets differ in regard to symptom profile, but do not differ in acid exposure or symptom/reflux association. Patients with LASC experience more dysphagia, but less heartburn, than IOM patients with low-amplitude, but propagated sequences. These findings raise the possibility of different pathophysiological mechanisms in IOM subsets, and this warrants further investigation.

The pathogenesis of IOM remains unknown, particularly whether it is related to GORD or represents a primary oesophageal motor disorder.

This study raises the possibility of different pathophysiologic mechanisms in the different subsets of IOM.

Further study of the IOM subsets using novel technologies such as impedance and topographic manometry is required.

The authors compared the demographic and clinical features of different manometric subsets of ineffective oesophageal motility and determined whether the prevalence of gastro-oesophageal reflux differs between IOM subsets. This is an interesting and well-written study.