AIM: To examine the risk of colorectal neoplasm in acromegalic patients by meta-analyzing all relevant controlled studies.

METHODS: Extensive English language medical literature searches for human studies, up to December 2007, were performed using suitable keywords. Pooled estimates [odds ratio (OR) with 95% confidence intervals (CI)] were obtained using either the fixed or random-effects model as appropriate. Heterogeneity between studies was evaluated with the Cochran Q test whereas the likelihood of publication bias was assessed by constructing funnel plots. Their symmetry was estimated by the adjusted rank correlation test.

CONCLUSION: Acromegaly is associated with an increased risk of colorectal neoplasm.

Acromegaly is a disease caused by excess secretion of growth hormone (GH), which is characterized by enlarged acral parts, coarse facial features, and visceromegaly. Acromegalic patients have a reduced life expectancy primarily due to cardiovascular, respiratory or cerebrovascular disease[1–5]. Acromegalics may also be at an increased risk for malignancies in several systems including the digestive tract, brain, kidney, breast and prostate[6–10]. Colon cancer incidence[6710] and mortality rates[9] have been reported to be higher in acromegalics than expected. However, reported relative risks of colorectal cancer vary significantly depending on the study population and the study design. Moreover, the reported higher indices of colorectal neoplasia in acromegalics have not been a universal finding[11–13]. The main aim of this meta-analysis, therefore, was to examine the pooled risk of colorectal neoplasia (polyps and cancer) in acromegalic patients by meta-analyzing all relevant controlled studies. Secondary aims were to explore the possibility of heterogeneity between studies and to look for the existence of publication bias. This study is justified by the fact that, so far, no meta-analysis has been published examining the relationship between acromegaly and colorectal neoplasia.

We searched the MEDLINE/PUBMED and EMBASE databases up to December 2007 to identify all relevant English language medical literature for human studies under the search text terms; acromegaly AND (colon cancer OR colon polyps OR colorectal cancer OR colorectal polyps). We also performed a full manual search of all review articles, published editorials and of retrieved original studies. Data from each study were extracted independently by two authors (T.R and D.P) by using a predefined form, and disagreements were resolved by discussion and consensus.

Studies not meeting the aforementioned criteria, and in addition studies without data for retrieval, studies using historical control patients or autopsy data and duplicate publications were excluded. When two papers reported the same study the publication that was more informative was selected.

Agreement in the selection of studies between the 2 reviewers was evaluated by the κ coefficient. We calculated the pooled odds ratios (ORs) and 95% confidence intervals (CI) and compared outcomes of individual studies by using the fixed[14] or the random effects model[15] as appropriate. Forest plots were constructed for visual display of OR (95% CI) of individual studies and pooled data. Heterogeneity between studies was evaluated with the Cochran Q test[16] and it was considered to be present if the Q test provided a P value of less than 0.10[1617]. In the presence of significant statistical heterogeneity, sensitivity analyses were performed to search for the possible sources, such as sample size of each study, etc. These analyses were achieved by repeating the meta-analyses with exclusion of each individual study one at a time, in order to assess the overall effect of each study on the pooled ORs[18]. This indicates which particular studies are most influential and might help in the evaluation of the possibility that the conclusions result from the influence of a particular study. The likelihood of publication bias was assessed by constructing funnel plots[18] and their symmetry was estimated by the Begg and Mazumdar adjusted rank correlation test[19].

This was an investigator-initiated unfunded study. All authors had access to the data and the statistical analysis report. Each author approved the final article and attests to the validity of the results.

A flow chart describing the process of study selection is shown in Figure 1. Out of 106 titles initially generated by the literature searches, 48 were rejected as the title suggested that the articles were not appropriate. Of the remaining 58 abstracts, 32 were excluded for not having extractable data (editorials, review articles, case reports, commentaries and letters to the editor). Therefore, 26 papers remained candidates for eligibility. Of these, 17[68911–1320–30] were rejected on the basis of not fulfilling the inclusion criteria. Therefore 9 controlled studies remained eligible for meta-analysis[31–39]. Initial agreement between the reviewers for the selection of relevant articles was high (κ = 0.924, 95% CI, 0.851-0.997). 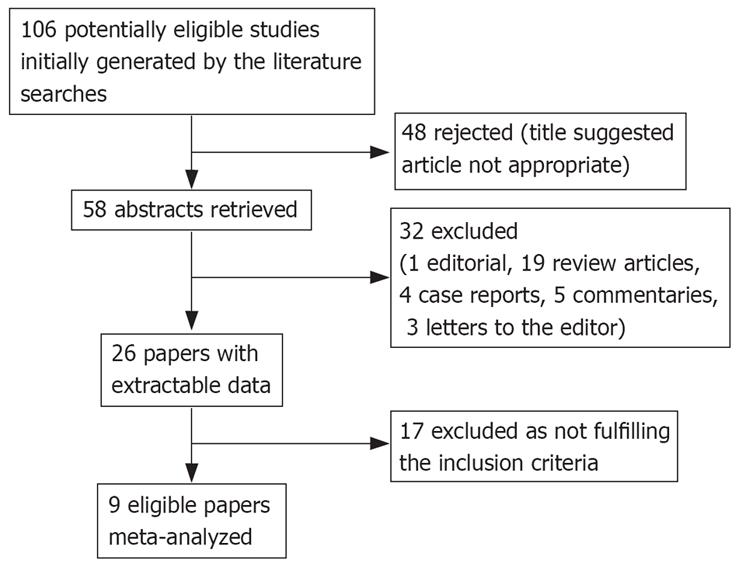 Figure 1 Flow diagram of the studies identified in this meta-analysis.

The main characteristics of the papers eligible for meta-analysis are shown in Table 1. The studies were conducted in different parts of the world; most were single centre studies and included 701 acromegaly patients and 1573 controls. 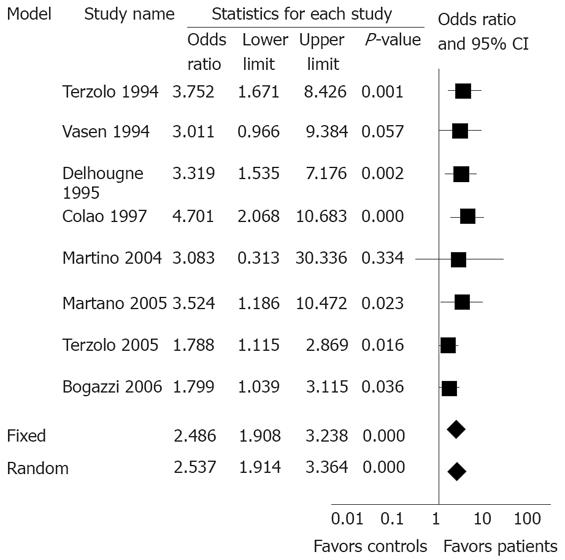 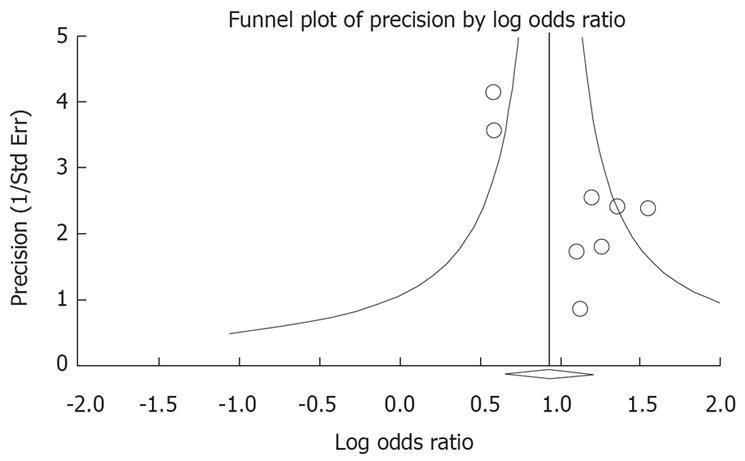 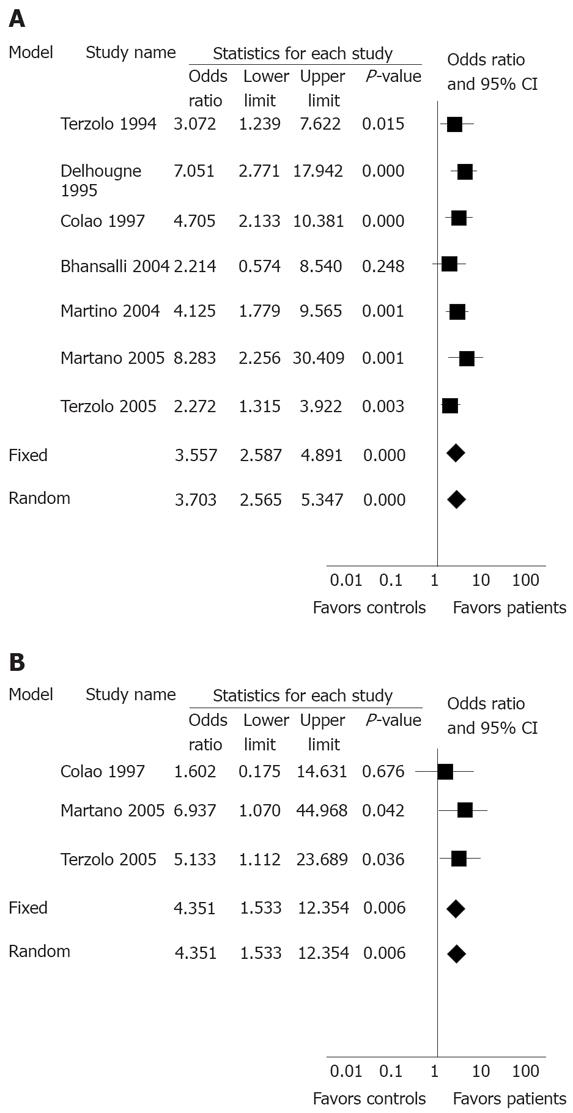 The discrepant results in the literature prompted us to undertake a meta-analysis on control trials in order to assess whether patients with acromegaly are at an increased risk of developing colorectal neoplasia, because if this is the case, then in these patients an aggressive approach to endoscopic management should be applied. In addition, our study is justified by the fact that, so far, no meta-analysis has been published examining the relationship between acromegaly and colorectal neoplasia.

The pooled results in this study clearly showed that acromegalic patients are at a significantly increased risk of developing colorectal adenomatous and hyperplastic polyps as well as colorectal cancer compared with controls. This estimate is in agreement with the results of three larger epidemiological studies assessing the risk of colonic cancer in acromegaly[7910]. According to these findings, therefore, it is beyond doubt that a suitable endoscopic approach, with early large bowel endoscopic screening and regular surveillance, is fully justified in acromegaly patients. Needless to say total colonoscopy is essential in acromegaly, as in several studies proximal colon pathology was found[133334]. This requirement is made more difficult by the increased length and capacity of the acromegalic colon[1342]. To overcome this and the prolonged colonic transit time in acromegalic patients, rigorous bowel preparation, in excess of that usually used, is needed[42].

Why should acromegaly patients be at an increased risk of colorectal neoplasia? The answer to this question is difficult, but it seems that the increased risk for several cancers among acromegaly patients may be due to the elevated proliferative and anti-apoptotic activity associated with increased circulating levels of insulin-like growth factor-I (IGF-I). There is an increasing body of evidence suggesting that adults with high concentrations of IGF-I are at increased risk of colorectal cancer[45–47]. In some of these studies, high IGF binding protein-3 (IGFBP-3) levels were associated with a lower risk of cancer[4546]. In acromegaly, GH excess increases serum IGF-I and, to a lesser extent, IGFBP-3 concentrations, with the IGF-I to IGFBP-3 ratio being greater as GH concentrations increase[4849]. Thus, an elevated IGF-I to IGFBP-3 ratio is expected to increase cancer risk in acromegaly[4550]. On the other hand, IGF-I receptors and mRNAs for IGF-I have been identified in human colorectal cells[51]. IGF-I is a known mitogen that may stimulate, by autocrine and paracrine actions, the proliferation of intestinal epithelial cells and their migration[52]. In fact, increased proliferation of colonic epithelium, proportional to circulating IGF-I levels, has been demonstrated in acromegaly[53]. Moreover, IGF-I is able to stimulate the growth of colorectal cancer cells in vitro, whereas blockade of IGF-I receptors inhibits cell growth in the same model[515455].

In conclusion, this study showed that acromegalic patients are at an increased risk of colorectal adenomatous and hyperplastic polyps as well as colorectal cancer. Therefore, acromegaly should be characterized as a disorder carrying a high risk for the development of colorectal neoplasia where an aggressive approach to endoscopic management with early screening and regular surveillance is justified.

Patients with acromegaly may be at an increased risk for malignancies in several systems including the digestive tract. However, the reported higher indices of colorectal neoplasia in acromegalics have not been a universal finding.

We evaluated the risk of colorectal neoplasm in acromegalic patients by meta-analyzing all relevant controlled studies.

Based on this evaluation, we concluded that acromegalic patients are at an increased risk of colorectal adenomatous and hyperplastic polyps as well as colorectal cancer. Therefore, acromegaly should be characterized as a disorder carrying a high risk for the development of colorectal neoplasia where an aggressive approach to endoscopic management with early screening and regular surveillance is justified.