Duodenal diverticula are a relatively common condition. They are asymptomatic, unless they become complicated, with perforation being the rarest but most severe complication. Surgical treatment is the most frequently performed approach. We report the case of a patient with a perforated duodenal diverticulum, which was diagnosed early and treated conservatively with antibiotics and percutaneous drainage of secondary retroperitoneal abscesses. We suggest this method could be an acceptable option for the management of similar cases, provided that the patient is in good general condition and without septic signs.

Duodenal diverticula are a relatively common condition. Usually asymptomatic, they may become clinically evident when complicated, for example, with inflammation, bleeding or perforation. Perforation is the rarest complication and carries a high mortality. As this is exceptional, there are no well defined management recommendations. Below, we describe one approach to conservative management.

An 85-year-old female, with arterial hypertension as the only antecedent, arrived at the Emergency Department with an intense thoracic pain radiating to the upper abdomen, accompanied by cold sweating, which occurred suddenly while she was out walking. A few minutes later, she experienced nausea and vomiting. General exploration demonstrated arterial hypotension and epigastric pain on palpation. Blood analysis only showed leukocytosis (15 000/mm3 with 82% neutrophils). Thoracic and abdominal radiographs were normal. Due to a suspicion of dissecting aorta aneurism, a thoraco-abdominal computed tomography (CT) was performed, revealing perihepatic-free liquid, pneumoperitoneum and retropneumoperitoneum next to the cava vein, secondary to perforation of a hollow viscus, probably of the duodenum (Figure 1).

In the initial hours following the patient´s admission to hospital she improved with only intravenous fluid resuscitation, presenting with remittent fever and abdominal pain. It was decided to maintain conservative manage-ment with nasogastric decompression and intravenous Meropenem, which was then administered.

The nasogastric tube was retrieved on the fourth day, but she remained nill-by-mouth and continued to receive intravenous antibiotherapy. She had an uneventful evolution; on the sixth day, a Gastrografin swallow examination revealed a duodenal diverticulum in the second portion, without leakage of contrast at this time (Figure 2). A new abdominal CT showed an abscess surrounding the duodenal diverticula and another one, which was retrohepatic and subdiphragmatic, containing air. Both were drained percutaneously. The patient was discharged on the twentieth day. Six months later she is asymptomatic. 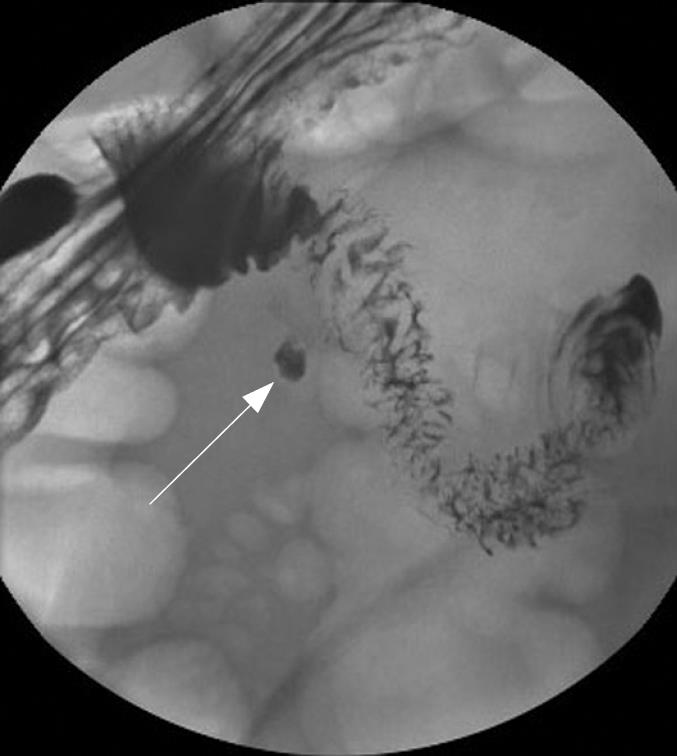 The incidence of duodenal diverticula is estimated to be 5%-22% in a healthy population[12]. Most of these are located along the pancreatic or mesenteric border, mainly in the second part of the duodenum, and are really pseudodiverticula, as they do not involve all of the intestinal layers[2–4]. Many of them are near the ampulla of Vater, and these are known as perivaterian or periampullary diverticula[4].

They are asymptomatic until they develop complications. Many possible complications have been reported. The most frequent are inflammation, haemorrhage, pancreatitis and common bile duct obstruction. Perforation is considered to be the rarest complication, and is also the most serious, with a mortality of up to 20%[56]. Only about 100 cases have been reported over the past two decades[2].

Diagnosis is difficult, because the clinical presentation is non-specific, without pathognomonic signs or symptoms, and requires imaging. However, the most frequent presentation is acute pain in the right upper abdomen or epigastrium, associated with nausea and vomiting.

As the perforation is usually open to the retroperi-toneum, it is possible there will be no signs of peritonism. Diverticulum perforation usually leads to retroperitoneal abscess formation and sepsis. It may also lead to the development of duodenocolic fistula with steatorrhea or gastrointestinal bleeding if perforation gets into the aorta[6]. It is important to make a differential diagnosis with other right upper abdomen pathologies such as cholecystitis, cholangitis, pyelonephritis, perforated duodenal ulcers or even bottom right pneumony.

In most instances plain abdominal radiographs or ultra-sounds are used as the first imaging techniques with subtle findings, and preoperative diagnosis is usually incorrect[2]. CT is the modality of choice[7], usually demonstrating a thickened bowel wall, mesenteric fat inflammation and an extraluminal collection of air and fluid, often retroperitoneal[7–9]. It is frequently possible to identify the diverticulum itself.

The most common approach is surgical, although there exist only a few reports of conservative management with antibiotics and percutaneous drainage[810–13]. Surgical intervention will depend on the clinical situation and intraoperative findings. If inflammation permits, the treatment of choice is, after kocherizing the duodenum, diverticulectomy with single or double-layer duodenal closure. It is important to place drainage tubes, especially in the retroperitoneum if affected[247]. A tongue of the greater omentum can be patched over the closure. Injury to the pancreatic or distal common bile duct can be avoided by placing a tube into the ampulla of Vater before dissecting the diverticulum.

When there is substantial inflammation of the duodenum, a diversion should be performed by a subtotal gastrectomy followed by Billroth II reconstruction, or a Roux-en-Y gastroenteroanastomosis. Only patients who are mildly affected are likely to benefit from non-operative management. In these patients, the perforation has probably already sealed spontaneously, or will do so within a short period of time.

Non-operative management consists of nasogastric decompression and wide spectrum antibiotics. It may be advisable to perform radiographic studies with water-soluble contrast between the fifth and seventh day, before starting oral alimentation with fluids. Formation of abscesses is likely, so percutaneous drainage must be easily accessible if conservative management is implemented. If a patient’s condition worsens, conservative management must be abandoned in favour of surgery.

In conclusion, duodenal diverticulum perforation is a very rare but serious complication with a difficult diagnosis, normally requiring a CT. Very few cases which have been treated conservatively, for example, using antibiotics and posterior percutaneous drainage, have been reported. This option must only be tried in patients who are in a generally good condition with no septic signs. This must of course be replaced by surgery if the patient deteriorates.