AIM: To evaluate the efficacy and tolerability of two different preparations of esomeprazole in healing duodenal ulcers.

METHODS: A total of 60 patients with active duodenal ulcers were enrolled and randomized to receive esomeprazole enteric-coated capsules (40 mg) or esomeprazole magnesium (40 mg), once daily, for 4 consecutive wk, with ulcer healing being monitored by endoscopy. Safety and tolerability were also assessed.

CONCLUSION: The efficacies of esomeprazole enteric-coated capsules and esomeprazole magnesium in healing duodenal ulcer lesions and relieving gastrointestinal symptoms are equivalent. The tolerability and safety of both drugs were comparable.

Esomeprazole, the stereospecific S-isomer of omeprazole, is the first proton pump inhibitor (PPI) to be developed as a single isomer for use in the treatment of acid-related diseases[12]. This optical isomer is subject to less first-pass metabolism and lower plasma clearance than omeprazole, thereby offering higher systemic bioavailability[34]. Early studies have shown esomeprazole achieves greater and more sustained acid control than omeprazole, with a similar tolerability and safety profile[56]. Furthermore, esomeprazole shows a more rapid onset of acid-suppression effect than omeprazole, and less inter-individual variation in acid control[78]. Additionally, a recent crossover study demonstrated that esomeprazole at a standard dose of 40 mg once daily provides more effective control of gastric acid at steady state than standard doses of pantoprazole, lansoprazole and rabeprazole in patients with symptomatic gastroesophageal reflux disease (GERD)[910]. In addition, esomeprazole treatment yields higher erosive esophagitis healing rates and provides sustained resolution of heartburn in more patients than any other currently available PPI[11].

A randomized, double-blind, double-dummy, parallel-controlled study was conducted in accordance with the ethical principles of the Declaration of Helsinki and internationally accepted guidelines for clinical trials in patients with duodenal ulcer disease. Each protocol was approved by an independent ethics committee prior to study commencement. All patients provided written informed consent before entry into the study. The randomization scheme was computer generated. A centralized allocation method was used to assign patients to a treatment group.

Men and women aged 18-65 years, with no more than two active endoscopically confirmed duodenal ulcers (less than 2 cm in diameter), were recruited into the study from April 2006 to July 2006. Major exclusion criteria included: Pregnancy or lactation, any clinically significant abnormal laboratory values at entry, multiple drug allergies, prior gastric surgery, and concurrent treatment with corticosteroids or non-steroidal anti-inflammatory drugs. Discontinuation of any previous PPI therapy was required at least 7 d before randomization. No antisecretory drugs, including H2-receptor antagonists, or any other agents known to alter the pharmacokinetics of PPI, were allowed during the study or within 1 wk before entry. In addition, patients were excluded from the study if they had esophageal erosions or ulceration, esophageal and/or gastric varices, gastric ulcer, pyloric stenosis, endoscopic evidence of active gastrointestinal bleeding or Zollinger-Ellison syndrome. Other exclusion criteria concerned concurrent renal or hepatic insufficiency, treatment for cancer and any history of drug or alcohol dependence.

Of the 60 patients enrolled in the study, 30 in the treatment group received esomeprazole enteric-coated capsules and 30 in the positive control group received esomeprazole magnesium, and 95% of patients completed the study. Three patients (5%) discontinued the study, all in the esomeprazole magnesium group, and were excluded from the evaluable cohort because of consent withdrawal. The baseline demographic and clinical characteristics of the 57 patients in the evaluable cohort, gender, age, height, blood pressure, heart rate, duration of disease, pre-entry score and initial ulcer size and number, were not different between the two groups (Table 1). Overall, the population was predominantly male (70.2%) and most patients were less than 55 years of age (80.7%). Approximately one-third of patients smoked and consumed alcohol, and this proportion was comparable between the two groups. Compliance with study medication was high during 4-wk treatment period, with more than 90% of the patients in each treatment group taking over 75% of the prescribed drugs.

Eligible patients were randomly assigned in a double-blind fashion to one of the two groups: The treatment group received esomeprazole enteric-coated capsules (40 mg; Chongqing Lummy Pharmacy, China) and an esomeprazole magnesium-matching placebo, and the other group received esomeprazole magnesium (40 mg; Nexium, AstraZeneca Inc) and an esomeprazole enteric-coated capsule-matching placebo as a positive control group. The study began within 3 d of baseline endoscopy. Patients were administered the medicine once daily in the morning, 30 min before breakfast, for up to 4 wk. All medications were packaged and labeled identically to maintain blinding. Treatment allocation for each patient was provided in individually sealed and blinded randomization envelopes which were collected and checked by the monitor at the end of the study to ensure the integrity of the blinding.

Ulcer healing was determined by sequential endoscopies performed after 2 wk of therapy, and again after 4 wk if the ulcer was not healed. The primary efficacy variable was the rate of ulcer healing, defined as complete regeneration of the mucosa (re-epithelialization) with no visible mucosal breaks at the site of all ulcers identified during the study. An erosion at the original site of any ulceration was considered to be evidence of incomplete healing (Figure 1). Whenever possible, endoscopic examinations in individual patients were performed by the same endoscopist. 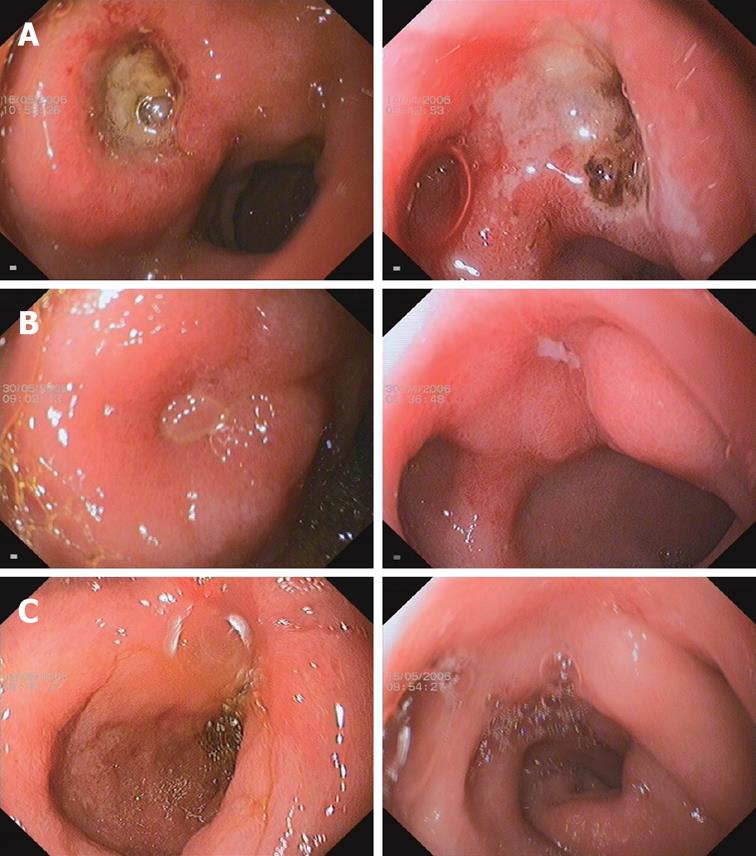 The secondary end-points of the frequency and intensity of epigastric pain, heartburn, regurgitation, flatulence, belching, nausea and vomiting were assessed at baseline and at the endoscopy visits. Gastrointestinal symptoms were graded on a four-point scale: 0 = none; 1 = mild (aware of symptoms, but easily tolerated); 2 = moderate (discomfort sufficient to cause interference with normal activities); and 3 = severe (incapacitating, with inability to perform normal activities). The patients recorded all of these items in diary cards on a daily basis. The investigator used the diary card information to complete the study case report forms and obtained the total score of all recorded symptoms. The relief of gastrointestinal symptoms was calculated as [(baseline total score-post-treatment total score)/(baseline total score)] × 100%.

The safety and tolerability of the medication were assessed using physical examination at final visit, review of adverse events as reported by patients at wk 4, and clinical laboratory evaluations at baseline and at the final visit. Clinical laboratory tests included serum chemistry, hematology and urine analysis. The causal relationship of an adverse event to the study drug was classified as being probable, possible or unlikely, and the intensity of the adverse event was rated as mild, moderate or severe. The action taken with study drug in response to the adverse event (none, treatment temporarily stopped, treatment discontinued) was also recorded.

Data were analyzed using SAS for Windows, version 6.12; the null hypothesis was rejected if P-values were ≤ 0.05. The primary analysis was carried out on the per-protocol (PP) population, which included all randomized subjects who completed a full course of each treatment, had no appreciable loss of data, and had no major protocol violations. The significance of differences in categorical data was determined using the Pearson χ2 or Monto-Carlo’s exact test. The Student’s t test and Mann-Whitney U test were used when appropriate. Results are reported as means and standard deviations.

Assessment of gastrointestinal symptoms showed significant improvements in the frequency and intensity of epigastric pain, heartburn, regurgitation, flatulence, belching, nausea and vomiting at wks 2 and 4, and the two groups demonstrated comparable efficacy. At wk 2, the rate of symptom relief was 90.8% in the esomeprazole enteric-coated capsules treatment group compared with 86.7% in the esomeprazole magnesium positive control group (P = 0.5406). At wk 4, the rates of symptom relief in the two groups were 95.2% and 93.2%, respectively (P = 0.5786).

Of the 60 patients with duodenal ulcers who were randomized with respect to medication, 57 patients received either esomeprazole enteric-coated capsules (n = 30) or esomeprazole magnesium (n = 27) for four wk, and were included in the safety and tolerability analysis. Only a few adverse events were documented with the following distribution: 5/30 patients (16.7%) in the esomeprazole enteric-coated capsules treatment group, and 4/27 patients (14.8%) in the esomeprazole magnesium positive control group (Table 2). There was no difference between the two groups (P = 1.0000). The reported adverse events during the trial were minor and did not require treatment interruption. There were no clinically relevant changes in blood pressure, heart rate or laboratory values during the study.

Of the 3 patients who withdrew from this study, one patient moved to another city because of a change in work place, and the other two patients rejected the gastroscopic operation because of complete symptom relief.

There are stereoselective differences in the metabolism of PPIs by the cytochrome P450 (CYP) isoenzymes 2C19 and 3A4, and this is the basis of the observed pharmacodynamic and clinical efficacy differences between esomeprazole and omeprazole[12–15]. A study in which these enzymes were expressed from cDNAs suggested that CYP2C19 is responsible for 40% and 87% of the total intrinsic clearance of S- and R-omeprazole, respectively[16], indicating esomeprazole would be cleared more slowly in vivo[1617]. Several pharmacological studies using intragastric pH monitoring conducted in either healthy subjects or GERD patients have consistently established the superiority of standard dose esomeprazole over all other currently available standard PPI regimens[18–22]. Recently, another S-isomer of pantoprazole has been used to investigate the efficacy in the treatment of acid-related disease; it has shown better efficacy in the control of GERD symptoms than its racemic mixture of pantoprazole[23].

Two randomized multicenter trials[2526] which used esomeprazole to treat DUs demonstrated that in H pylori-positive patients with duodenal ulcer, 1 wk of esomeprazole (20 mg twice daily) triple therapy followed by placebo for 3 wk provides the same effective ulcer healing, H pylori eradication and symptom control when compared with 1 wk of omeprazole (20 mg twice daily) triple therapy followed by a 3-wk period of omeprazole monotherapy (20 mg once daily). The authors concluded that 1 wk of esomeprazole-based triple therapy is sufficient to ensure high rates of ulcer healing without the need for follow-on PPI monotherapy in patients with uncomplicated duodenal ulcer disease. Besides, in GERD patients, esomeprazole demonstrated significantly higher healing rates at 4 and 8 wk than other standard dose PPIs, and the magnitude of the benefit that esomeprazole offers increases with the severity of the underlying reflux esophagitis[11].

Proton pump inhibitors (PPI) were introduced in the late 1980s and have emerged as the drug class of choice for the treatment of most acid-related disorders. Omeprazole was the first PPI on the market, followed by lansoprazole, rabeprazole, pantoprazole and esomeprazole, in that order. Conversely from the other available PPIs, which are all racemic mixtures, esomeprazole, the S-isomer of omeprazole, is the first PPI to be developed as a single isomer and demonstrates pharmacological and clinical benefits beyond those seen with racemic PPIs.

Studies have shown esomeprazole at a standard dose of 40 mg once daily achieves greater and more sustained acid control than standard doses of any other currently available PPI, with good safety.

This study was designed to evaluate the efficacy and tolerability of two different preparations of esomeprazole, esomeprazole enteric-coated capsules and esomeprazole magnesium, in the healing of active duodenal ulcers.

Isomers are compounds which have the same molecular formula but different chemical structures. Depending on the types of differences there are between the structures, it is possible to classify isomers into various sub-types. Stereo-isomers contain the same functional groups and differ only in the arrangement of atoms in space.

The study is performed well and carefully written.