RESULTS: Double-balloon enteroscopy was performed in all 56 patients in a 30-mo period. A possible site of blood loss was identified in 54 (96%) patients. Enteroscopy provided accurate localization of the bleeding in 53 (95%) of 56 patients, but failed to disclose the cause of bleeding in 4 (7%). There was one case with negative intraoperative finding (2%). Resection of the affected bowel was carried out except one patient who experienced rebleeding after operation. Gastrointestinal stromal tumor (GIST) was most frequently diagnosed (55%).

CONCLUSION: Double-balloon enteroscopy is a safe, reliable modality for determining bleeding lesion of small intestine. This technique can be used to direct selective surgical intervention.

MATERIALS AND METHODS
Patients and methods

We reviewed retrospectively the records of 56 consecutive patients who underwent surgery from June 2003 to December 2005 for small bowel bleeding in whom preoperative double-balloon enteroscopy was performed. The group of patients consisted of 26 females and 30 males with a mean age of 58 years (range from14-75 years). The bleeding history ranged from 1 wk to 10 years. The main presenting features were melaena or maroon stool. The mean hemoglobin level was 65 g/L (range from 35-98 g/L). The mean number of packed red blood cell unit transfused to each patient prior to surgery was 10 U. Coagulation parameters were normal in all patients. Each patient received an extensive diagnostic evaluation with 4 diagnostic procedures including esophagogastroduodenoscopy, colonoscopy, computed tomography, scintigraphy and barium enema, as well as angiography, and capsule endoscopy in some patients, but all failed to elucidate a possible bleeding site. The diagnostic workup for the patients prior to referral is summarized in Table 1. Two patients underwent surgery previously for bleeding.

Double-balloon enteroscopy was performed with a Fujinon EN450P5 video enteroscope (Fujinon, Saitama, Japan) with a working length of 2.0 m. EN450P5 is a thinner endoscope with an external diameter of 8.5 mm, and forceps channel diameter of 2.2 mm. The instrument is forward-viewing with a 120º angle of view.

Small bowel enteroscopy was performed in all 56 patients. A possible site of blood loss was identified in 54 (96%) patients. Neoplastic lesions were visualized in 43 patients, vascular malformation in 5, Meckel’s diverticulum in 3, Peutz-Jeghers syndrome in 1, Crohn’s disease in 1, polyp in 1 and negative finding in 2 patients.

All patients were surgically explored immediately after the enteroscopy. Thirty-six patients underwent laparoscopic surgery and 20 patients laparotomy. The final diagnoses of all patients are summarized in Table 2. GIST was the most frequent diagnosis in our study group (Figure 1). Thirty-one (55%) patients had GIST (19 located within 1.0 m distal to the ligament of Treitz). Other diagnoses included adenocarcinoma in 7 (13%) patients (Figure 2), Meckel’s diverticulum in 4 (7%), vascular malformation in 3 (5%), adenoma in 2 (3%), ulceration in 2 (3%), Peutz-Jeghers syndrome in 1 (2%), lymphoma in 1 (2%), Crohn’s disease in 1 (2%), leiomyosarcoma in 1 (2%), hemangioendothelioma in 1 (2%), inflammatory polyp in 1 (2%), pheochromocytoma in 1 (2%), and negative findings in 1 (2%) patient. 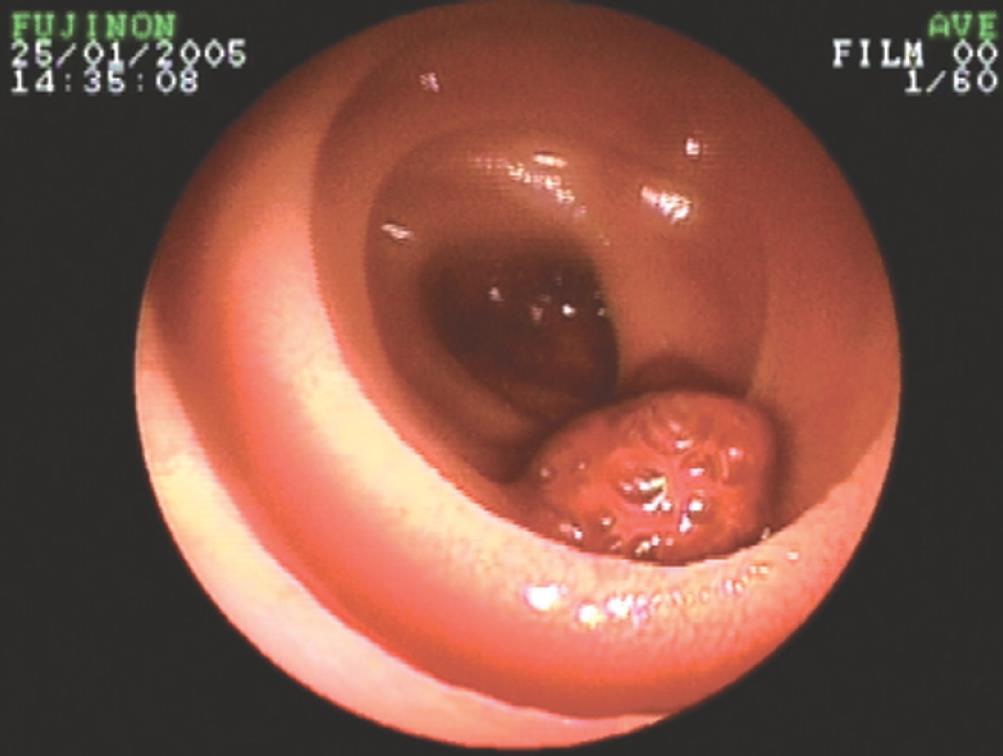 Figure 1 Enteroscopy identified a polyp 1. 5 cm in diameter in jejunum.

Figure 2 Stromal tumor of small intestine. A: Preoperative enteroscopy; B: Surgical exploration; C: Photomicrograph of the lesion (HE, × 100).

In 53 of 56 patients, enteroscopy provided accurate localization of bleeding, but it failed to disclose the causes of bleeding in 4 patients. Three patients were diagnosed with vascular malformation with preoperative enteroscopy, but the surgical specimen revealed Meckel’s diverticulum, GIST and ulcer respectively. In two patients who had a normal small bowel at total enteroscopic examinations, ulcer was found in 1 patient and GIST in the other by surgery. One patient had a jejunal a polyp with enteroscopy, but no visualized lesion was found in surgery (Figure 3).

Figure 3 Adenocarcinoma of small intestine. A: Preoperative enteroscopy; B: Surgical exploration; C: Photomicrograph of the lesion (HE, × 100).

Vascular lesions are the most common cause of intestinal bleeding, accounting for 70%-80% in the Western world[5], but in China are neoplasms, accounting for 22.2%-60.9%[6]. Other causes include Meckel’s diverticulum, ulcerative disease, and Crohn’s disease[7]. Neoplasm was the most frequent diagnosis in our study group, accounting for 80%. The relative high rate was not reported previously. Small bowel bleeding always occur chronically and intermittently. Its intermittent and self-limiting nature may render correct diagnosis more difficult. In about 5% of patients, even multiple diagnostic modalities are unable to localize the source of bleeding[8]. This causes a management problem as therapy depends on locating the site of blood loss. Double-balloon enteroscopy is an important advance in the exploration of the small bowel, especially for lesions discovered beyond the reach of standard endoscopy[9]. The advantage of the technique over push enteroscopy is that extend portions of the small bowel can be viewed. It has been reported that push enteroscopy successfully identified the source of bleeding in 24%-75% of patients[10–13]. Recently, Zhong reviewed 20 patients undergoing double-balloon enteroscopy for obscure gastrointestinal hemorrhage and reported a correct diagnosis in 80% cases[14]. Although the diagnostic efficiency varies in different series, the indications and diagnostic yield of enteroscopy have yet to be fully defined. As shown by our experience, the indications for enteroscopy were classified into four groups: (1) Unexplained disease of small bowel such as digestive bleeding, abdominal pain and diarrhea. (2) Incomplete intestinal obstruction. (3) Diagnosis was made but the extension of small bowel lesion needs assessment. (4) Follow-up after treatment for small bowel disease. Of the 56 patients in this series, histopathologic examination confirmed the endoscopic findings in 52 (93%) cases. Though enteroscopy failed to disclose the causes of bleeding in 4 patients, surgery revealed that enteroscopy provided the accurate localization of bleeding in 53 of 56 patients. Therefore, enteroscopy is a reliable modality for accurately localizing the site of small bowel bleeding. These enable surgeons confidently provide appropriate surgical intervention.

The small intestine represents approximately 75% of the total length of the gastrointestinal tract and more than 90% of the mucosal surface, but fewer than 2% of all gastrointestinal malignancies originate in the small bowel[15]. It has been estimated that 35%-50% of the small bowel tumors are adenocarcinomas, 20%-40% are carcinoids and about 14% are lymphomas[1617]. GIST is uncommon mesenchymal tumors, accounting for approximately 0.1%-0.3% of all gastrointestinal neoplasms[18]. However, in this group of patients, the most common histological type is GIST. Among all the 42 patients with small bowel tumors, 31 patients had GIST. The high proportion of GIST has not been found in other studies. About 32% of gastrointestinal GIST have been found in the small bowel[19]. GIST comprises a spectrum of variable malignances ranging from benign to aggressive forms[20]. Histologically, the distinction between benign and malignant tumors is not evident Two of the strongest pathologic predictors of malignant behavior are size and mitotic count[21]. According to Shiu, GIST > 6 cm in diameter should be considered a potential malignance[22]. GITS usually arises from or between the muscularis propria and the muscularis mucosa of the bowel wall and extends primarily toward the serosa[23]. But small bowel enteroscope is limited in its mucosal visualization and can only detect the lump within the bowel lumen. Therefore, preoperative enteroscopy has little value in predicting benign or malignant behavior of GIST. However, to this kind of patients, enteroscopy can accurately localize the site of hemorrhage. The rate of rebleeding after surgery is very low. Interestingly, 19/31 stromal tumors arise within 1.0 m distal to the ligament of Treitz. Similar result was reported by Soderman[24]. The main surgical complication in this area is prolonged gastroparesis and ileus. Four of 19 patients of our group had such complications.

Although most vascular lesions appear endoscopically similar, they consist of various pathological identities such as angiodysplasia (vascular ectasia), venous ectasia, telangiectasia, hemangiomas, arteriovenous malformation (AVM) and caliber -persistent artery (Dieulafory’s lesion)[25]. Small bowel barium may not detect mucosal-based lesions such as vascular ectasias. 99mTc-labelled red blood cell scintigraphy and angiography are seldom useful in identifying the bleeding site in patients with chronic and moderate blood loss[26]. Moreover, pooling of blood in the intestine may result in false localizations. One patient in this group had previously undergone a segmental resection based on angiographic findings. But reoperation revealed that the lesion identified by angiography is 2.0 m distal to the real bleeding lesion. At present, small bowel enteroscopy is not capable of marking the site of bleeding, so the areas of vascular malformation must be endoscopically reidentified by intraoperative enteroscopy so that the surgeon can precisely determine their location and the extent of surgical resection. Three cases of vascular lesions in our group underwent intraoperative enteroscopy and similar findings were described to that of preoperative enteroscopy (Figure 4).

Peutz-Jeghers syndrome (PJS) is an autosomal dominant inheritance characterized by hamartomatous gastrointestinal polyps and mucocutaneous pigmentation, and 70%-90% of patients have polyps in the small bowel[27]. As the polyps are located diffusely throughout the small intestine, resection of the entire affected intestine may lead to short-bowel syndrome[28]. The main advantage of enteroscopy is that surgeon can identify and resect the segment concentrating polyps. Endoscopic procedure allows effective snare of the residual polyps so as to avoid the risk of developing short-bowel syndrome[29].

It is highly possible that entire small intestine can be observed by the double-balloon enteroscopy using the combination of both anterograde and retrograde routes[30]. We agree with Pennazio M that identification of a single lesion is often enough for both diagnostic and therapeutic purposes[31]. In our group, only 4 patients underwent both approaches and only one patient experienced rebleeding. Total small bowel enteroscopy identified a polyp 1.5 cm in diameter in this patient (Figure 3), but exploratory laparotomy with intraoperative endoscopy failed to find a source of blood loss. The reason may be that the manipulation of endoscopy can lead to the shedding of polyp, but the patient had rebleeding 3 mo after operation.

As the technology continues to evolve, the endocopy will provide more valuable information. But the findings by enteroscopy has not been clarified, especially in the vascular lesion. For example, one patient in our group was diagnosed with hemangioma in the jejunum by preoperative enteroscopy (Figure 5A), the surgical specimen revealed Meckel’s diverticulum (Figure 5B). In conclusion, double-balloon enteroscopy is a safe, reliable modality in determining bleeding lesion of small intestine. As such, this technique can be reliably used to direct selective surgical intervention. Further studies should focus on analyzing and refining the clinical implications of endoscopic results.

Figure 5 Vascular malformation of small intestine. A: Preoperative enteroscopy; B: Surgical exploration; C: Photomicrograph of the lesion (HE, × 100).
COMMENTS
Background

Current techniques for detecting the source of bleeding in the small intestines have low diagnostic yields. The source of bleeding can be identified by colonoscopy, arteriography, scintigraphy, and barium radiology, but no bleeding sites are found in about 5%-10% of cases. Compared with other methods, double-balloon enteroscopy has the advantage of direct visualization of the intestinal lumen, permitting biopsy and treatment in some cases.

Localization of the bleeding site in small intestine is critical to planning appropriate therapy.

Gastrointestinal bleeding (OGIB) is generally defined as recurrent bouts of chronic bleeding for which no definite source has been discovered by routine investigations.

Double-balloon enteroscopy is a safe, reliable modality for determining bleeding lesion of small intestine. This technique can be used to direct selective surgical intervention.

This is an interesting retrospective review of a significant number of cases. And the patients after double enteroscopy were subsequently subjected to surgery, and histological confirmation was done. The authors evaluated the use of double-balloon enteroscopy in identifying the source of small intestinal bleeding. Double-balloon enteroscopy can reliably direct surgical intervention for patients with small intestinal bleeding.