AIM: To analyze the clinical and endoscopic features of Chinese patients with reflux esophagitis (RE).

METHODS: A total of 1405 RE patients were analyzed retrospectively. Data on gender, age, presence/absence of H pylori infection and associated esophageal hiatal hernia were collected. Esophagitis was divided into different grades according to Los Angeles Classification.

RESULTS: Of 18823 patients, 1405 were diagnosed as RE. The ratio of male to female patients was 1.75:1 (P < 0.01). The mean age of male and female patients was significantly different (P = 0.01). The peak age at onset of the disease was 40-60 years. According to Los Angeles Classification, there were significant differences in the age of patients with grades A and B compared to patients with grades C and D (P < 0.01). Two hundred and seventy-seven patients were infected with H pylori, the infection rate was low (P < 0.01). Complication of esophageal hiatal hernia was found to be significantly associated with the severity of esophagitis and age in 195 patients (P < 0.01). Esophageal mucosa damages were mainly located at the right esophageal wall.

Gastroesophageal reflux disease (GERD) is described as a chronic symptom and/or tissue damage caused by abnormal gastric content refluxing up into the esophagus. GERD is a common disease, with associated typical symptoms of heartburn and regurgitation[1]. In recent years, the questionnaire survey among 5000 subjects in Beijing and Shanghai revealed that 10.19% and 7.76% of the subjects have associated reflux symptoms and it is, thus, speculated that GERD has a prevalence of 5.77%[2]. A community-based investigation in Guangdong Province showed that heartburn and/or regurgitation occurs at least one week in 6.2% of the community population[3]. It was reported that the prevalence of GERD varies greatly, from 7% to 15% and even to over 20%[4]. Patients with GERD have manifestations of esophageal mucosal damages, such as reflux esophagitis (RE), non-erosive GERD (reflux disease) or negative endoscopy reflux disease (NERD)[5–7]. As a common gastrointestinal disease, RE has attracted widespread attention at home and abroad. To further understand RE and summarize its clinical and endoscopic features, a total of 1405 patients with RE undergoing endoscopic examination in the Digestive Endoscopy Center of our hospital were retrospectively analyzed in the present study.

A total of 18 823 patients underwent endoscopic examinations in the Digestive Endoscopy Center of Beijing Friendship Hospital between September 2004 and January 2007. The unified questionnaire was established and carefully filled in by specialists mainly based on endoscopic diagnosis. The general items included in the questionnaire for RE cases were gender, age, etc. The diagnostic data about the patients with RE included endoscopic staging, presence of associated H pylori infection and esophageal hiatal hernia (EHH), etc.

A total of 18823 patients (9800 males and 9023 females) underwent endoscopic examinations in the Digestive Endoscopy Center of Beijing Friendship Hospital between September 2004 and January 2007. Of them, 1405 patients (895 males and 510 females) were diagnosed as reflux esophagitis. Their age was 15- 89 years.

H pylori infection was evaluated based on the diagnosis by rapid urease staining, C13 breath test or pathological silver staining. Esophageal hiatal hernia was diagnosed when dentate line shifted 2 cm or more upward under endoscope, and hernia sac was seen under intra-gastric reversal endoscope. Mucosa within the hernia sac was diagnosed as gastric mucosa. Furthermore, esophageal hiatal hernia could be definitely diagnosed according to the upper gastrointestinal contrast.

A 1:00-12:00 location mark of esophageal mucosa damage similar to the index dial was established by setting the midpoints of anterior, posterior, left and right esophageal walls as 12:00, 6:00, 9:00 and 3:00, respectively. The location of mucosal damage was expressed as the corresponding location mark. 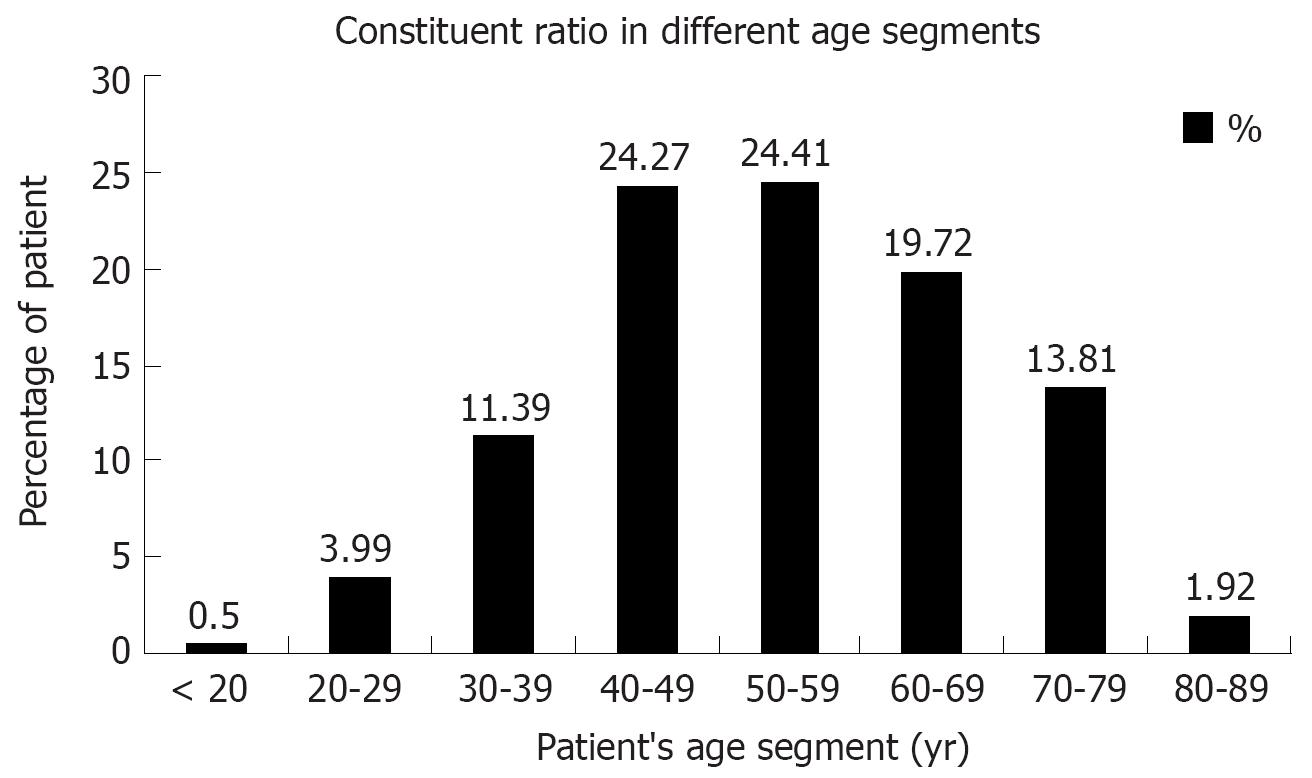 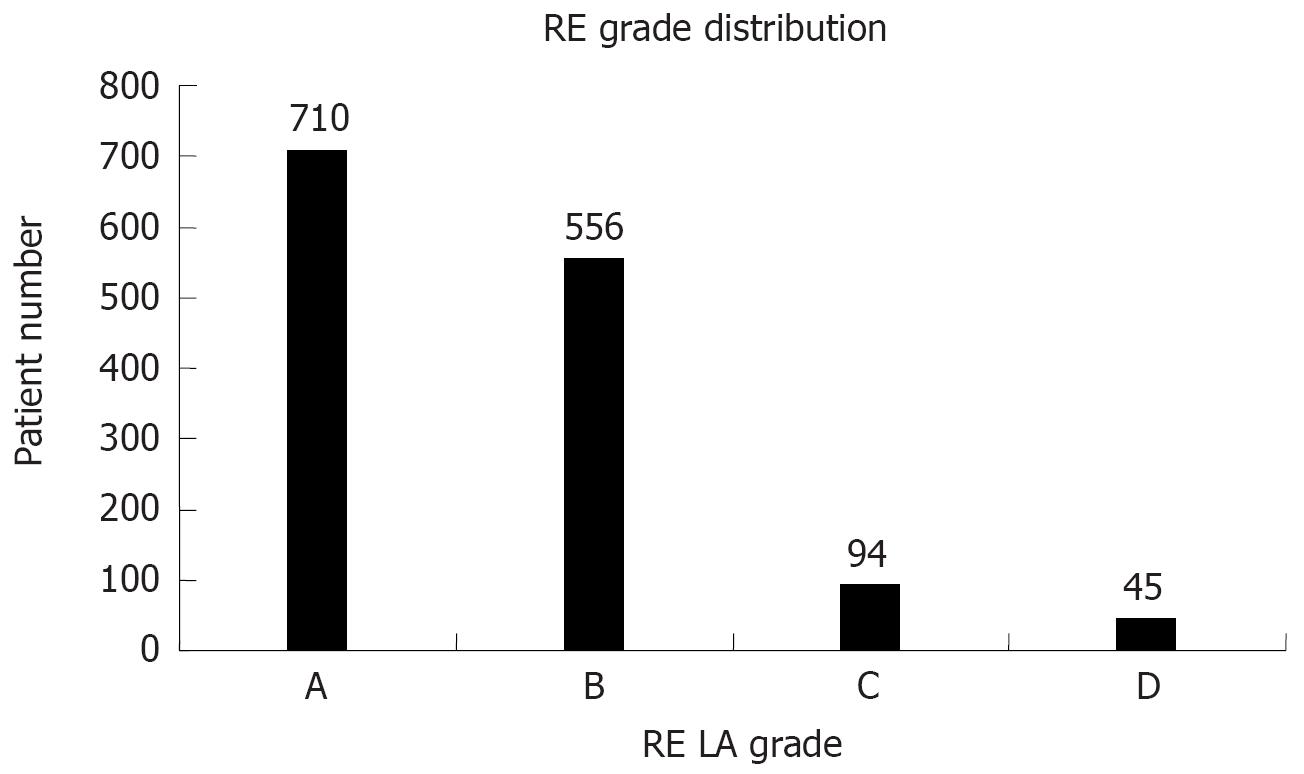 Figure 3 Distribution of mucosal damage in patients with Los Angeles Classification grade A (A) and grade B (B). 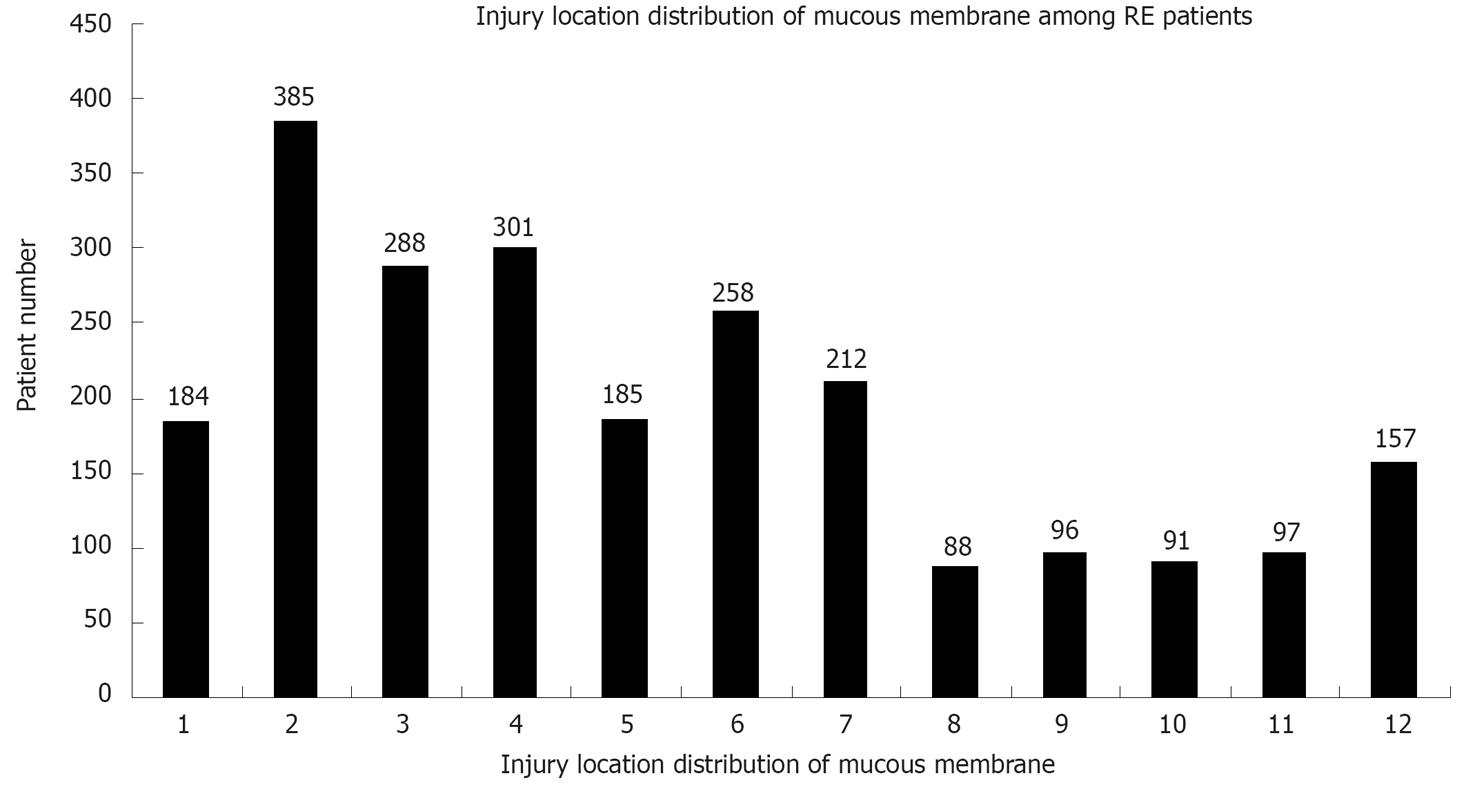 Figure 4 Distribution of location of mucosal damage in patients with reflux esophagitis.
DISCUSSION

Population-based studies suggest that GERD is a common condition with a prevalence of 10%-20% in Western Europe and North America[89]. The prevalence rates in South America (10%) and Turkey (11.9%) are similar to those in European countries[1011]. In Asia, the prevalence is generally lower[12]. Chen et al[3] reported that the prevalence of heartburn occurring weekly is 6.2% while Wong et al[13] have found a lower prevalence of 2.3%. With the deepening of studies and understanding of gastroesophageal reflux disease, the number of such patients is increased in clinical practice. The significantly decreased quality of life in RE patients has increasingly attracted extensive attention[14–16]. It was reported that the quality of life deteriorates as the severity of GERD increases[17]. In the present study, all the patients undergoing endoscopic examinations in our hospital between September 2004 and January 2007 were analyzed. The detection rate of reflux esophagitis was 7.46%, which was higher in males than in females. The ratio of male to female was 1.75:1, suggesting that males have a higher susceptibility to RE than females. In comparison to the Italian general population, the prevalence of over-weight and obesity is increased in female RE patients but not in male RE patients[18]. Furthermore, RE tends to occur at a younger age of male patients, which may be related to the differences in life style between males and females. A study demonstrated that the prevalence increases linearly with age among women, and peaks among men at the age of 50-70 years and thereafter declines[19]. In the present study, the patients with grades A and B of RE accounted for 90.1%, suggesting that the disease is mild in most patients. Although reflux esophagitis can occur at all age stages, most patients are 40-60 years old. Esophagitis aggravates with the age of patients with reflux esophagitis. In this study, no statistical difference was found in items such as onset age and gender between patients with grades A and B of RE. Endoscopic examination is difficult to assess the length of esophageal mucosal damage. The esophageal mucosal damage in patients with grades A and B of RE was extended along the long axis of esophagus, which was different from transversal and vertical extension of damages in patients with grades C and D of RE. These results suggest that grades A and B of RE can be considered a same grade. According to the standards set at Yantai Meeting, reflux esophagitis can be divided into grade 0 = normal mucosa (histological changes may be observed), grade 1 = punctiform or strip redness and erosion without integration, grade 2 = punctiform or strip redness and erosion with integration but non-entire pattern, grade 3 = extensive lesions, redness, erosion integration with entire pattern or ulcers. Grade 1 is equivalent to grades A and B in Los Angeles Classification. It was reported that changes in esophageal motility and response to PPI therapy are similar between patients with grades A and B of RE[2021]. Therefore, we believe that the standards set at Yantai Meeting are more practical.

In the present study, the H pylori infection rate was significantly decreased in patients with reflux esophagitis. H pylori infection had no clear relationship with gender, age and severity of reflux esophagitis. There is evidence that H pylori infection is not associated with gastroesophageal reflux disease and H pylori-related inflammation does not affect sphincter motility, namely H pylori-positive patients have normal LES pressure and the normal frequency of transient LES relaxation[22]. Long-term PPI therapy can aggravate atrophic gastritis in patients infected with H pylori. For H pylori-positive patients with gastroesophageal reflux disease, long-term PPI therapy should be preceded by the eradication of H pylori. During the long-term PPI therapy for GERD, H pylori infection can speed up the progress of gastric atrophy. Some investigators have proposed that H pylori should be eradicated in these patients. Nevertheless, eradication of H pylori does not have a clear effect on reflux symptoms in some GERD patients. A study by Spanish scientists showed that treatment of non-erosive gastroesophageal reflux disease with lansoprazole has no effect on H pylori infection[23]. According to the randomized controlled trial by Schwizer et al[24], symptoms of H pylori-positive GERD patients occur earlier than H pylori-negative patients and those on eradication therapy for H pylori infection, suggesting that H pylori increases the sensitivity of esophagus and accelerates recurrence of symptoms. In contrast, Moayyedi et al[25] have not found any significant differences in the recurrence after eradication of H pylori in a large sample of patients. It was also reported that the infection rate of H pylori is higher in Chinese than in white Americans[2627].

In the present study, most patients with grade A of RE had one mucosal damage while those with grade B of RE had 2 or more mucosal damages. It was found that the most frequent location of mucosal damages in reflux esophagitis patients was the right esophageal wall, especially at the points of 2:00 and 4:00. This pathological change may be due to the anti-reflux role of oesophagogastric angle (His angle) and Gubaroff valve, which makes the left esophageal wall suffer from less gastric acid erosion. In contrast, the right esophageal wall is eroded and damaged by gastric contents more easily because of its direct connection with cardia ventriculi and the lack of valvar protection. Katsube et al[31] reported that the circumferential location of esophageal mucosal breaks differs significantly among different grades of esophagitis, suggesting that reflux of gastric contents into the esophagus can be effectively improved after a valve is added to cardia ventriculi by means of endoscopy or surgical technique.

In conclusion, the peak age of RE onset is 40-60 years and higher in male than in females. The mean age of RE onset is lower in males than in females. The infection rate of H pylori is significantly lower in patients with esophagitis, but the severity of esophagitis is not associated with H pylori infection. Old age and combined esophageal hiatal hernia are associated with more severe esophagitis. Right esophageal mucosal damage can occur more often in patients with reflux esophagitis.

The clinical and endoscopic features of Chinese patients with reflux esophagitis (RE) were analyzed. The relationship between RE and patient’s gender and age, between RE and H pylori infection, between RE and hiatal hernia (HH) was discussed. The main location of esophageal mucosa damages to esophageal wall was found.

The clinical and endoscopic features of Chinese patients with reflux esophagitis (RE) were analyzed. The peak age of RE onset was 40-60 years and higher in males than in females. The mean age of RE onset was lower in males than in females. The infection rate of H pylori was significantly lower in patients with esophagitis, but the severity of esophagitis was not associated with H pylori infection. Old age and combined esophageal hiatal hernia were associated with more severe esophagitis. Right esophageal mucosal damage can occur more often in patients with reflux esophagitis.

The characteristics of Chinese patients with RE were compared to those of people in other countries. Based on the fact that “right esophageal mucosal damage can occur more often in patients with reflux esophagitis”, new methods to cure GERD with endoscopy or surgery should be recommended.

In this manuscript, the authors analyzed the clinical and endoscopic features of Chinese patients with reflux esophagitis (RE) and described the low infection rate of H pylori in RE patients, the association of hiatal hernia with the severity of RE, as well as the prevalence of right-sided esophageal mucosal damage. The study was well designed and the conclusion was reliable. It should be noted the distribution of mucosal damage locations in patients with RE was not similar.