METHODS: RNA was extracted from the peripheral blood of 12 patients from 12 different families that fulfilled the Amsterdam II Criteria for HNPCC. Germline mutations of MLH1 were determined by RT-PCR, followed by cDNA sequencing analysis. PCR-GeneScan analysis was used to investigate microsatellite instability with a panel of five microsatellite markers (BAT26, BAT25, D5S346, D2S123 and mfd15), along with immunohistochemical staining to detect the expression of MLH1 protein in two patients' tumor tissues with novel mutations.

RESULTS: Three germline mutations were found in four patients, one of the mutations has previously been reported, but the other two, CGC→TGC at codon 217 of exon 8 and CCG→CTG at codon 581 of exon 16, have not been reported. The two patients' tumor tissues with novel mutations had high-frequency microsatellite instability that showed more than two unstable loci, and both tumors lost their MLH1 protein expression.

CONCLUSION: The two novel germline mutations of MLH1 in HNPCC families i.e. CGC→TGC at codon 217 of exon 8 and CCG→CTG at codon 581 of exon 16, are very likely to have pathological significance.

Colorectal cancer remains a serious public health challenge worldwide. According to the different molecular mechanisms, colorectal cancer is divided into two groups: sporadic and genetic. Hereditary non-polyposis colorectal cancer (HNPCC), the most common hereditary colon cancer syndrome[1], is a predominantly inherited disease associated with increased lifetime risk of a range of cancers, including colorectal and endometrial cancers, as well as extracolonic gastrointestinal, genitourinary, ovarian and brain cancers[2-9]. HNPCC development is associated with the functional deficiency of germline MMR genes. Up to now, seven MMR genes have been found, and among these, MLH1 and MSH2 are very closely associated with HNPCC[10-12]. Carriers of germline MMR mutations have a > 80% risk of cancer by the age of 75[13-15]. Twelve patients fulfilling Amsterdam Criteria II from China were explored in this study. Two novel MLH1 mutations were detected, and the pathobiology of the novel mutations was investigated.

MATERIALS AND METHODS
Subjects and samples

Twelve patients of Chinese descent from families fulfilling Amsterdam II Criteria were selected through the clinic at the Cancer Hospital of Fudan University, Shanghai, China. Personal and family cancer histories were obtained from the patients and participating relatives, and cancer diagnosis was confirmed by reviewing records and pathology reports. Informed consent was obtained from each participant. Three microliters of peripheral blood of each participant was taken. Total RNA of the peripheral blood was extracted using Trizol (Sigma), according to the manufacturer's instructions. Twenty unrelated volunteers from families without HNPCC were used as controls.

One 5-μm and four 7-μm paraffin-embedded sections of tumor tissues were deparaffinized. The 5-μm sections were stained with hematoxylin and eosin and served as controls. The 7-μm sections were lightly stained with hematoxylin for microdissection. The microdissection was performed under a dissection microscope with a scalpel. Tumor cells should account for at least 80% of the total cells isolated. The microdissected tissues were transferred directly into an Eppendorf tube with 150 μL cell lysis buffer (0.5 mol/L Tris, 20 mmol/L EDTA, 10 mmol/L NaCl, 10 g/L SDS, 0.5 g/L Proteinase K). The subsequent DNA extraction was performed according to the protocol of the DNA extraction kit (Daxia Biotech, Shanghai, China). Genomic DNA was also extracted from peripheral white blood cells.

Matched normal and tumor DNA was investigated with a panel of microsatellite markers (mononucleotide repeats BAT26 and BAT25, dinucleotide repeats D5S346, D2S123 and mfd15)[17]. The primer pairs were synthesized by Shenyou Biotech (Shanghai, China). Each forward primer was labeled with a fluorescent dye at the 5' end to enable the PCR products to be detected by an ABI 310 automated DNA sequencer. After successful amplification, the 2-μL PCR products were mixed with 12.5 μL deionized formamide and 2 μL 350 Rox Sizer. The mixture was denatured, snap-cooled and electrophoresed on an ABI 310 automated DNA sequencer according to the manufacturer's recommendation. The electrophoresis results were analyzed by GeneScan Software (Applied Biosystems). MSI was determined according to the method of Gebert et al[18]. Additional peaks (bands) at microsatellite loci in the tumor compared with normal tissue from the same patient were interpreted as MSIs. Cases with MSIs in more than two loci were interpreted as exhibiting high MSI.

A monoclonal antibody against MLH1 (Pharmingen, San Diego, CA, USA) was prepared at a 1:40 dilution. The antibody was detected by the EnVision method. Diminished expression of MLH1 in cancer tissues was demonstrated when there was complete absence of detectable nuclear staining of neoplastic cells. Infiltrating lymphocytes, as well as normal colonic crypt epithelium next to the tumor area, served as internal positive controls[19,20].

Four germline mutations were detected at three different sites of MLH1, involving four patients, which were at 649 codon 217 exon 8: CGC→TGC in family H2, at 1742 codon 581 exon 16: CCG→CTG in family H31, and at 1151 codon 384 exon 12: GTT→GAT in family H109 and H114. All three were missense mutations (Table 3, Figures 1 and 2). Their polymorphism possibilities were excluded by visiting the mutation database of MMR genes (http://www.insight-group.org). The mutation in families H109 and H114 has been reported to be pathogenic, while the mutations in H2 and H31 are not. The three abnormalities in MLH1 were not found in the control group. 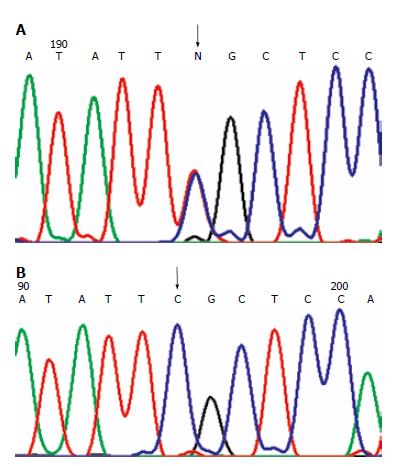 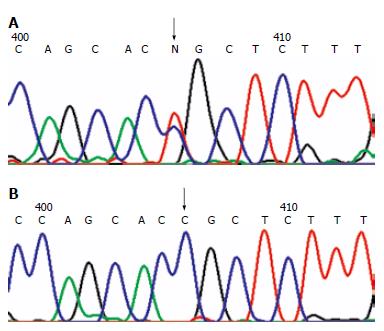 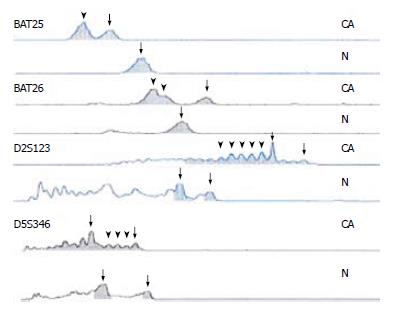 Figure 4 MLH1 protein in H2 was negative in the tumor glands (right), and positive in the mucous glands next to the tumor tissue (EnVison, × 200). 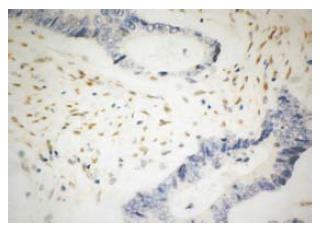 Figure 5 MLH1 protein in H31 was negative in the tumor glands, and positive in the stroma cells (EnVison, × 400).
DISCUSSION

Colorectal cancer is one of the most common malignant tumors; furthermore, its incidence is increasing conti-nuously. HNPCC, genetic colorectal cancer, accounts for about 10% of all colorectal cancer. Compared with sporadic colorectal cancer, HNPCC shows special characteristics associated with its molecular mechanisms and clinic features. HNPCC, as the most common hereditary colon cancer syndrome, is characterized by early onset of colorectal cancer, location of tumors in the proximal colon, and an increased risk of neoplasms of extracolonic organs, including endometrium, stomach, urothelium, small intestine, and ovary, multiple metachronous colorectal cancer[21-24], and better prognosis than that in sporadic cases[25-30]. Development of HNPCC is closely associated with deficiency or loss of MMR gene function. Identification of MMR gene germline mutations can have direct clinical implications in counseling and management of HNPCC families[31].

Differentiating HNPCC from sporadic colorectal cancer has practical clinical value, and the identification of HNPCC depends on the detection of germline mutations of the MMR gene. More MMR genes should be investigated besides MLH1, and when a novel mutation is found, its pathogenic evaluation should be carried out so that more HNPCC can be identified.

Hereditary non-polyposis colorectal cancer (HNPCC) is one of the most common autosomal dominantly inherited cancer syndromes and accounts for 10% of all colorectal cancer. HNPCC shows its own characteristics associated with its molecular mechanisms, clinical features, method of treatment, and management of HNPCC families. It has gained worldwide recognition, and the International Collaborative Group on Hereditary Non-polyposis Colorectal Cancer (ICG-HNPCC) was founded in 1990. At present, there are a few ways to screen HNPCC families; however, only the pathological germline mutation in the mismatch repair (MMR) gene can be used for identifying HNPCC families.

There are a few ways to screen HNPCC families, however, the most specific method is to detect germline mutations of MMR genes. In present study, a new method, RNA-based sequencing analysis, was used. Two novel germline mutations in MLH1 were found, and their possible pathobiology was investigated by PCR-GeneScan analysis and immunohistochemical staining.

Identification of pathological germline mutations in MMR genes is the gold standard for HNPCC. Differentiating HNPCC from sporadic colorectal cancer has direct clinical implications for counseling and management of HNPCC family members.

HNPCC is different from sporadic colorectal cancer(SCRC), and to differentiate HNPCC from SCRC owns practical clinical implications. The study detected germline mutations of MLH1 with a new method, and investigated the pathobiology of the detected novel mutations in MLH1. The study is a valuable contribution with potential clinical importance.