Fibromuscular dysplasia (FMD) of extrarenal location, visceral or splanchnic, accounts for a small percentage of cases. Clinical presentation is variable, generally as occlusive or aneurysmal disease, and sometimes associated with a family history of FMD. Treatment is not standardized due to rarity of the entity and includes either segmental resection, with or without angioplasty or medical treatment with anticoagulation and thrombolysis. We present a case report and review of the literature.

The patient's medical history was significant for multiple episodes of gastrointestinal bleeding and gastric ulcers. Surgical history was significant for small bowel resection, 6 mo prior to the present admission, where an exposed vessel was identified as the source of bleeding. A pathological diagnosis of angiodysplasia/vasculitis was made. Family history was unremarkable. The patient was a smoker and a social drinker but denied use of illicit drugs.

On admission his physical examination was positive for pallor and compensatory tachycardia with a stable blood pressure. Hemoglobin level was 8.4 g/dL despite multiple transfusions.

The patient was started on steroid therapy due to a history of vasculitis. However, antinuclear antibody titer (ANA) of < 1:16, excluded this possibility. Bleeding scan suggested a bleeding site in the small bowel bleeding most likely in the ileum. On the second day of admission an angiogram was performed with intent of embolization, and showed normal aorta and renal arteries and extensive vascular abnormalities involving all branches of the superior mesenteric artery, which included ectasia, bleading and narrowing; and marked ectasia of the inferior mesenteric artery and areas of hypervascularity. There was no evidence of contrast extravasation. Due to drop of hemoglobin and failure of medical treatment including attempted embolization, the patient was taken to surgery. Intraoperative colonoscopy showed obvious bleeding at the anastomosis site from the previous small bowel resection, in the ileum, with old blood distally. A segment of distal ileum, 6 cm away from the ileocecal valve was resected. No obvious bleeding site was identified.

The specimen received consisted of a 37.5 cm segment of small bowel designated as “distal ileum” and a grossly unremarkable vermiform appendix. On opening the small bowel, the mucosal surface was intact without evidence of ulcers or masses. There were multiple yellow, tan slightly elevated areas of the mucosa, giving the appearance of papules, ranging from 0.3 to 0.5 cm. The previous anastomosis site was intact. Sections through the mucosa, perineal fat and mesentery showed thickened and tortuous submucosal, subserosal and mesenteric vessels, some of them contained clotted blood. 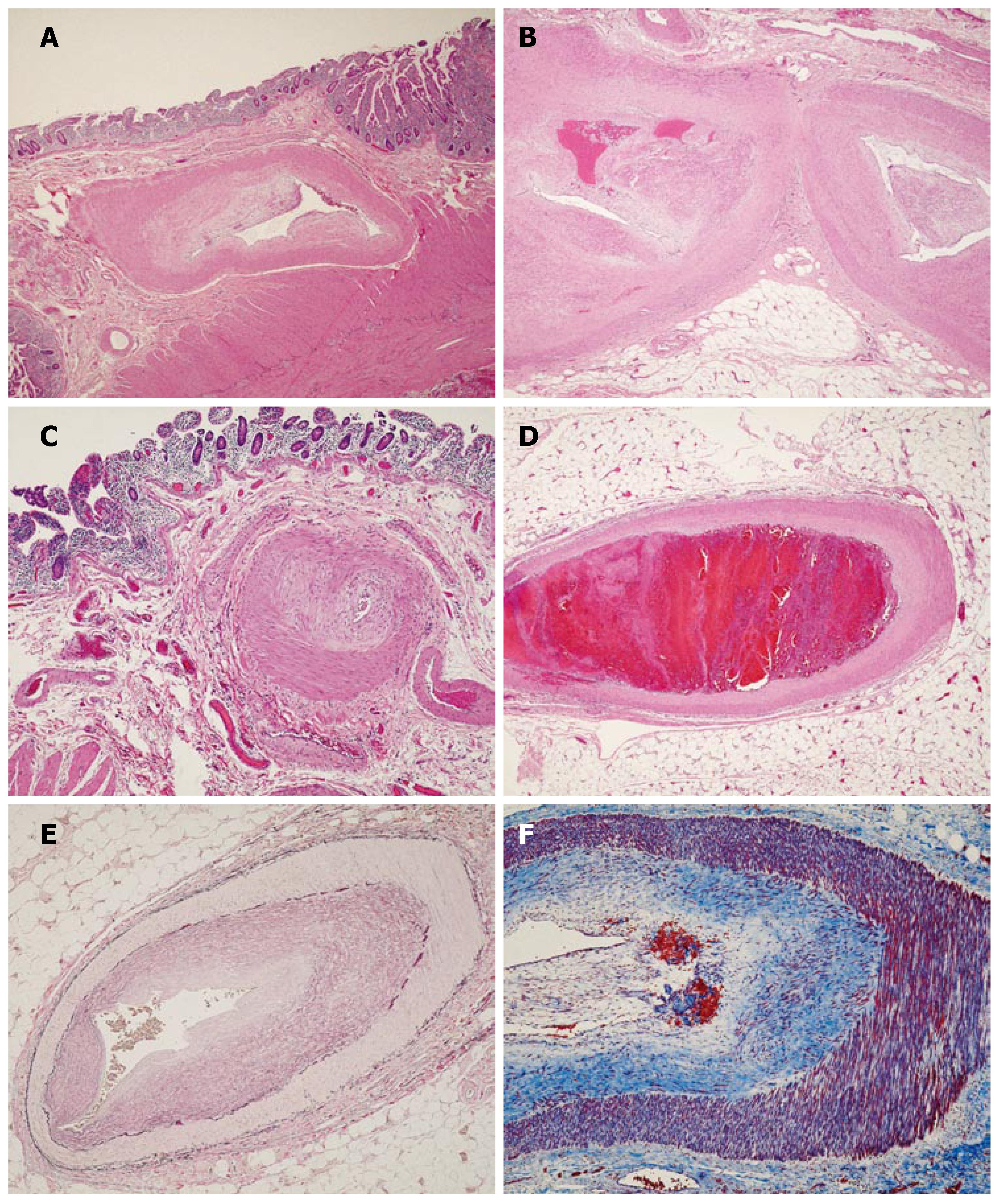 FMD was first described more than 68 years ago by Leadbetter, as a cause of hypertension, but was not until 1938 that it received an accurate pathological description by Mc Cormack, who reported four cases as “fibromuscular hyperplasia”[1,3]. Currently, FMD is well recognized as a nonatherosclerotic, noninflammatory vascular disease that most commonly affects young females, involving the renal and internal carotid arteries but has been described in almost all arterial beds in the body[1-9]. This entity accounts for less than 10% of cases of renal-artery stenosis[2]. Among 1200 cases of FMD studied by Meetinger[3], 60% involved renal arteries, 34% extracranial carotid and vertebral arteries, and less than 2.5% involved iliac, celiac and mesenteric arteries.

In 1975, Stanley[4], subdivided FMD into four categories, instead of three, according to histopathological findings: intimal fibroplasias, medial hyperplasia, medial fibroplasia and perimedial dysplasia. The first category, intimal fibroplasia accounts for 5% of cases of FMD appearing as irregular tubular stenosis in young patients and smooth focal stenosis in older persons, characterized histologically by an accumulation of irregularly arranged subendothelial mesenchymal cells within a loose matrix of fibrous connective tissue, often eccentric, with absence of inflammatory cells or foamy macrophages. The second, medial hyperplasia is characterized by increase in medial muscle, without demonstrable fibrotic changes, and accounts for less than 1% of cases. This category is difficult to differentiate roentographically from intimal fibroplasia. The third and most common category, medial fibroplasia, represents 85% of cases of renal FMD, and is most commonly seen in the pediatric population. It is characterized histologically by compromise of the outer media, or diffuse involvement of the entire media. Involvement of the outer media presents with compact fibrous connective tissue replacing smooth muscle peripherally, and a moderate accumulation of collagen in the inner media, separating disorganized smooth muscle. On the other hand, diffuse medial fibroplasia is characterized by severe disorganization, with disruption and replacement of smooth muscle by haphazard arrangements of fibroblasts and collagen. The last category, perimedial dysplasia, found in 10% of cases of FMD, is characterized by relatively acellular tissue in the region of the external elastic lamina that can be mistaken for dense collagen.

Both authors reported that macroaneurysms and dissections are the common complications of FMD. Aneurysms can present in any subtype, and their presence should not lead to a different diagnosis. To date, classifications are used in the literature, indistinguishably.

The etiology of FMD is unknown, but several factors, genetic, mechanical and hormonal, have been implicated[1-4,7-8]. Hormonal influence is considered due to the prevalence of the disease in hormonally active females. Although no association has been found between FMD and history of use of oral contraceptives or abnormalities of endogenous sex hormones, physiologic preconditioning of cellular elements to fibroblastic activities by estrogen has been shown. Mechanical factors, such as artery traction due to renal ptosis, could explain the increased frequency in the right kidney, compared to the left kidney. The stress involved in the stretch traction may predispose to fibroplasia directly by altering vessel wall tissues or indirectly by disrupting the vasa vasorum. Vasa vasorum of muscular arteries originates from branching of the parent vessel and arteries such as renal, extracranial carotid and external iliac arteries may have a normal paucity of vasa vasorum, making them prone to alteration. Genetic factors may be contributory, since FMD is more common among first degree relatives with renal FMD and among persons with angiotensin-converting-enzyme allele I (ACE-I).

The differential diagnosis is broad, but usually straight forward, once common etiologies are excluded[1,13]. Atherosclerosis typically occurs in older patients with cardiovascular risk factors and usually involves the origin or the proximal portion of the artery. In contrast, renal FMD occurs in younger patients, with few or no cardiovascular risks and frequently involves the middle or distal segments of artery. FMD is distinguished from active vasculitis, based on the absence of inflammation, anemia, thrombocytopenia or acute phase reactants. If histologic diagnosis is unavailable, angiography is unable to differentiate FMD and vasculitis, due to the extreme similarity in radiographic appearance, especially in the case of intimal fibroplasias, where both entities have identical manifestations, as illustrated in this case. Diseases affecting medium size vessels may induce identical histopathological changes in the vessel wall and should be considered in the differential diagnosis, including familial diseases such as neurofibromatosis and Friedreich’s ataxia, endocrine diseases such as diabetes and homocystinuria, autoimmune diseases including any type of vasculitis, allograft rejection, infectious vasculitis such as Rickettsia, Rocky Mountain spotted fever, epidemic typhus, scrub typhus, Q-fever, pseudomonas, syphilis, fungi, plague, Whipple’s disease, leptospirosis and schistosomiasis, toxic agents such as cocaine, coagulopathies such as thrombotic thrombocytopenic purpura, hemolytic uremic syndrome and disseminated intravascular coagulation, systemic hypertension, neoplastic entities such as intravascular lymphomatosis, endovascular papillary angioendothelioma or intravascular papillary endothelial hyperplasia, amyloidosis or emboli.

Visceral or splanchnic FMD accounts for 2.5% of cases of FMD and its clinical presentation has a wide spectrum[3,5-9,11-13]. When symptomatic, its presentation can be as occlusive disease or as aneurysmal disease. Occlusive disease ranges in spectrum from abdominal angina to intestinal gangrene. Of the seven case reports found in the literature with visceral FMD, two[8,9] had a family history of FMD or associated renal FMD. The other four[5,6,11,13] presented with only visceral involvement. The age ranged from 5 to 78 years. Three cases occurred in women and four in men. The initial presentation was acute abdomen in all the patients, with compromise of superior mesenteric artery in four patients, superior rectal artery in one, jejunal and sigmoid artery and colonic artery in one, and unspecified in the other patient. Two out of the seven patients presented with gastrointestinal bleeding. Histological analysis revealed mucosa with ischemic changes and FMD of different categories, intimal fibroplasia in three patients, medial fibroplasia in two patients, perimedial dysplasia in one patient and adventitial fibroplasia in one patient. Three patients died and four of the seven survived. Among the successfully treated patients, three had surgery with a segmental resection, one of them combined with angioplasty. One patient was medically treated with anticoagulation and thrombolysis, without requiring any invasive procedure.

Interestingly enough, a study that originated from a case of ischemic proctitis, analyzed 50 rectums and their blood supply in patients with a median age of 61 years[11] showed that adventitial FMD was found in more than 50% of unselected, examined specimens, indicating that a relatively mild, asymptomatic form of adventitial FMD is common in later life.

Treatment for visceral FMD is more anecdotic and based on retrospective case series[1]. Revascularization through angioplasty without stent, segmental resections, anticoagulation and fibrinolysis has been used.

We present a case of extrarenal, visceral FMD, with intimal fibroplasia histopathologic type, causing intractable and recurrent gastrointestinal bleeding, without ischemia or necrosis of the bowel, who was successfully treated surgically with partial jejunectomy. The patient did well, and a year after small bowel resection he developed a ventral hernia, requiring laparoscopic and open repair. The specimen showed a large artery with fibromuscular and intimal hyperplasia. No new episodes of gastrointestinal bleeding or gastrointestinal symptoms have been documented.