Colonic lipoma is an uncommon tumor of the gastrointestinal tract. Most cases are asymptomatic, with a small tumor size, and do not need any special treatment. However, we encountered one patient with a giant submucosal lipoma, with a maximum diameter of 8.5 cm, which exhibited symptoms such as intermittent lower abdominal pain, changes in bowel habits with passage of fresh blood and mucus per rectum, abdominal distension, anorexia and weight loss. Unfortunately, the possibility of colonic malignancy could not be precluded and left hemicolectomy was planned. The exact diagnosis of this special case was accomplished by intraoperative pathology. In the end, local resection was performed instead of left hemicolectomy. To the best of our knowledge, colonic lipoma exceeding 8 cm in diameter has not been previously reported. We, therefore, present this case and discuss age and sex factors, clinical and histopathological findings, diagnostic methods and treatment by reviewing the available literature, to serve as a reminder that colonic lipoma can also exist in patients with significant symptoms. In addition, intraoperative pathology should be investigated in those doubtful cases, so as to guide the exact diagnosis and treatment plan.

Lipoma of the colon is a rare condition which may be detected incidentally at colonoscopy, surgery or autopsy[1-3]. Most colonic lipomas are asymptomatic and need no treatment, whereas lesions exceeding 2 cm in diameter do produce symptoms[1,3-5]. Large colonic lipomas are usually mistaken for more serious pathology as a result of their rarity and variable presentation. Although the nosopoietic location of colonic lipoma usually varies with different cases, the commonest site is the ascending colon[2,4]. To the best of our knowledge, colonic lipoma exceeding 8 cm in diameter has not been reported previously. We report here, a patient with a giant lipoma, whose maximum diameter reached 8.5 cm, located in the submucosa of the descending colon, and review the literature regarding colonic lipoma.

A 42-year-old man presented to us in February 2007 with a 3-wk history of intermittent lower abdominal pain. One month previously, he experienced changes in bowel habits (7-10 times daily), with passing fresh blood and mucus per rectum, abdominal distension, anorexia and weight loss. A routine colonoscopy had been performed in another hospital 15 d previously, which revealed a yellowish, 7.5-cm diameter, spherical polypoid lesion arising from the lateral wall of the descending colon (Figure 1). The related biopsy revealed a lot of inflammatory necrotic tissue and a glandular cell with mildly atypical hyperplasia. Physical examination revealed mild tenderness in the left lower quadrant. Routine blood tests were normal except for mild anemia. Abdominal ultrasonography indicated a space-occupying mass of the lower abdomen. Considering the uncertain diagnosis, we suggested that colonoscopy or computed tomography (CT) should be performed again in our hospital, but this was refused by the patient. In view of his age, symptoms and related examinations, the possibility of colonic malignancy could not be precluded, and left hemicolectomy was subsequently planned. 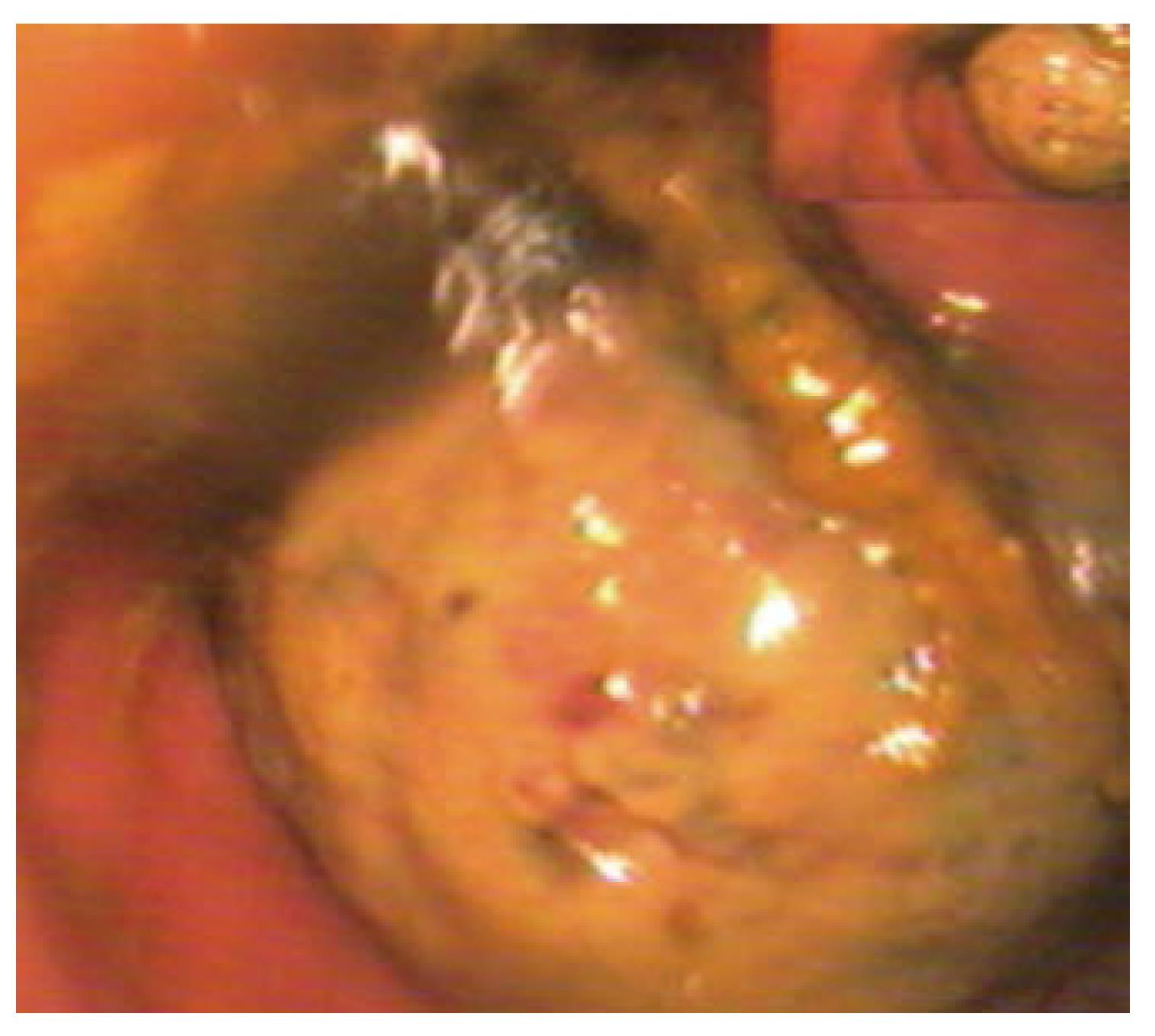 Figure 1 Colonoscopy showed a yellowish, spherical, polypoid lesion, with a lot of inflammatory necrotic tissue and numerous areas of ulceration on its surface, which arose from the lateral wall of the colon. The lesion almost obstructed the whole lumen.

At laparotomy, an 8.5 cm × 7 cm × 6.5 cm yellowish polypoid lesion, associated with numerous areas of ulceration on its surface, was seen arising from the descending colon. The lesion almost obstructed the whole lumen, and resulted in dilatation of the proximal colon. However, to our surprise, such a large lesion was only located on the submucosa, without invasion of the serosa. Subsequently, microscopical examination confirmed that this lesion was only located in the submucosa, and originated from adipose tissue, but it had necrotic tissue and ulcerations on its surface (Figure 2). Finally, the diagnosis was confirmed to be one of submucosal lipoma of the descending colon, and local resection was performed. The patient recovered and was discharged 12 d postoperatively. 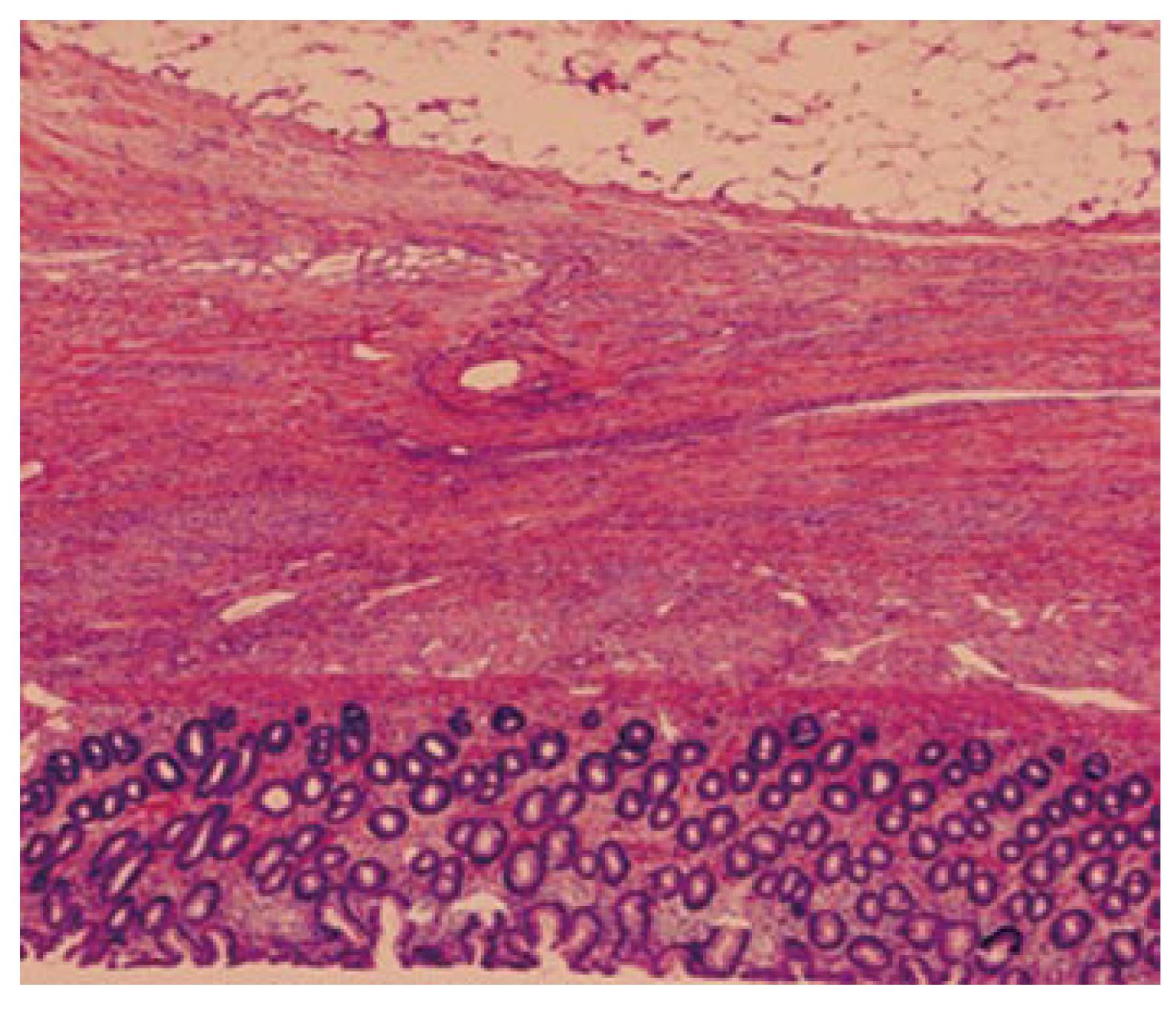 Figure 2 Histopathology showed that the lesion was located in the submucosa, of adipose origin, and was complicated with necrotic tissue and granulation on its surface (HE, × 100).
DISCUSSION

Lipoma of the colon is an uncommon tumor of the gastrointestinal tract, and belongs to the group of benign non-epithelial tumors. As reported at autopsy, the incidence of colonic lipoma ranges from 0.035 to 4.4%[4]. In general, colonic lipomas do not cause symptoms and, therefore, are usually detected incidentally during colonoscopy, surgery and autopsy. However, a minority of lipomas can cause symptoms when the lesion is large, especially for those with a diameter > 2 cm[1,3-5]. To the best of our knowledge, colonic lipoma with a maximum diameter of 8.5 cm, associated with significant symptoms, has not been previously reported.

The clinicopathologic features of symptomatic lipomas are reviewed in the literature[1-4,6-9] and are summarized in Table 1. Thus, we can conclude that the most common signs and symptoms include abdominal pain (42.4%), bleeding per rectum (54.5%) and alteration in bowel habits (24.2%). With respect to sex distribution, there is a female predominance (66.7%), while other authors have found a nearly equal sex distribution[10]. The most common age is the fifth or sixth decades of life. As for its location, the most typical site for solitary colonic lipoma is the ascending colon (45.5%), whereas the lesion in our report was located in the descending colon. From Table 1, we can see that a solitary lesion is usually found in most cases; by contrast, multiple lesions occur in 6.1% of cases.

Microscopically, colonic lipomas are usually located in the submucosa, and numerous fibra intervals (Figure 3) can be observed in adipose tissue, resulting in the lobulated appearance of lipoma. Furthermore, varying degrees of fat necrosis, granulation and ulceration may be found on the surface of relatively large lipomas. 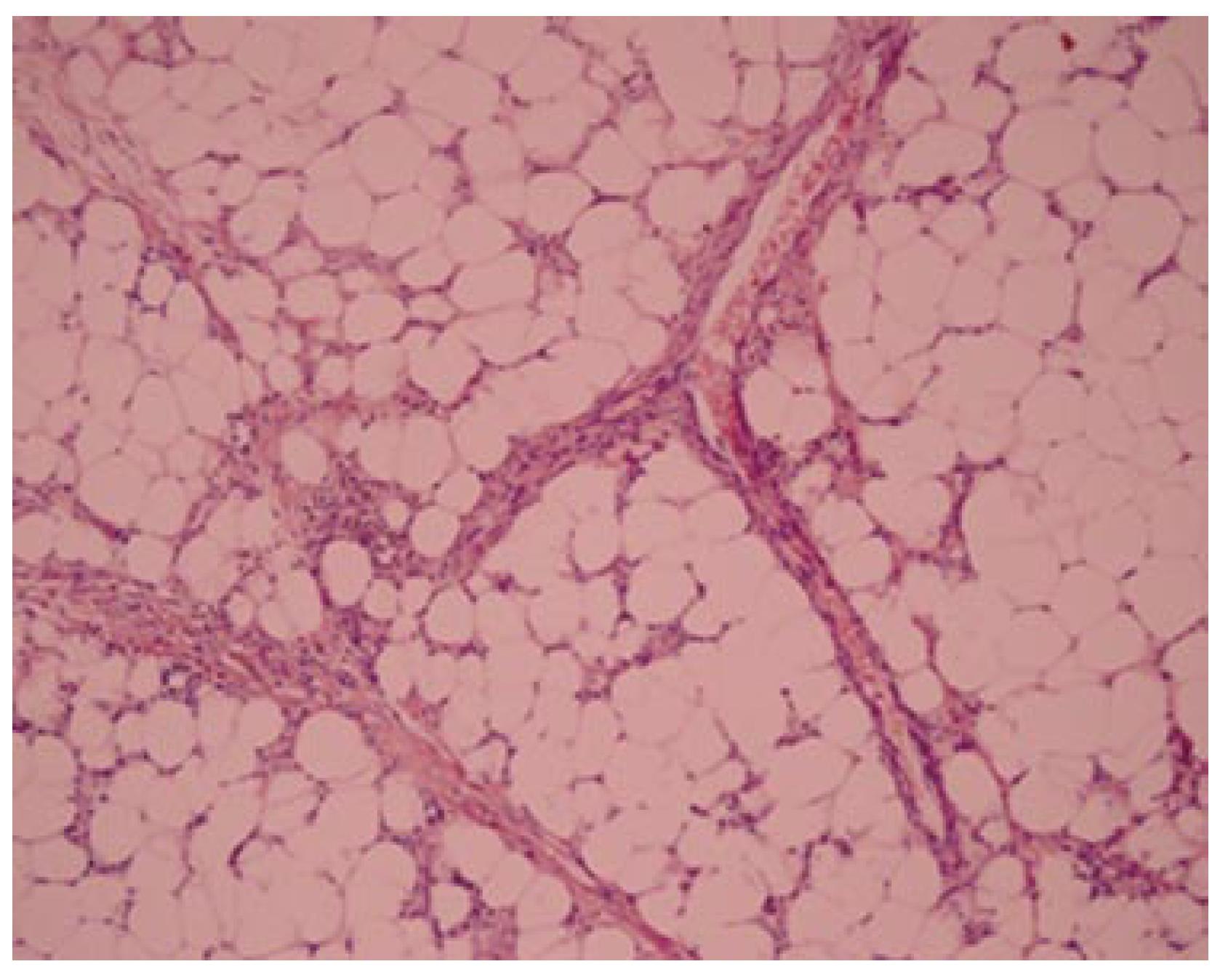 Figure 3 Histopathology showed the numerous fibra intervals in the adipose tissue (HE, × 200).

With the widespread application of colonoscopy, small lesions are found incidentally, and their diagnosis and treatment are mainly dependent on endoscopy[1-3]. However, large colonic lipomas are often mistaken for more serious pathology, as a result of their rarity and variable presentation. Therefore, more attention should be paid to how to increase the rate of preoperative diagnosis. Clinical features are still important, especially for those large lesions. Our patient with an 8.5 cm × 7 cm × 6.5 cm lesion should have presented with the appearance of complete intestinal obstruction. However, to our surprise, he did not present as an emergency with significant symptoms. Several factors may have contributed to this phenomenon. One potential explanation is the slow growth rate of colonic lipoma. Another, and perhaps more likely explanation is the long-standing obstruction caused by the lesion, which results in proximal colonic dilatation.

Although imaging findings may be less specific, they have still contributed to the preoperative diagnosis. Barium enema may demonstrate a filling defect, and the lesion may exhibit a lobulated appearance[4,6], but this phenomenon is non-specific and the lesion can be mistaken for another type of neoplasm, although water enemas are thought to improve the contrast with radiolucent fat[11]. For large colonic lipomas and acutely ill patients, CT and magnetic resonance imaging are the preferred methods because their imaging characteristics are relatively typical for adipose tissue, and they provide a rapid diagnosis[2,6].

Since most lipomas are submucosal, colonoscopy can provide direct visualization and pathologic examination via biopsy forceps. Thus, preoperative diagnosis mainly depends on colonoscopy. Typical lipomas appear as smooth, spheroidal, slightly yellowish polyps of variable size, with or without a pedicle[3]. In addition, three signs may contribute to the diagnosis, including "cushion sign"[12] (probing the polyp with a closed biopsy forceps will often yield a pillow-like indentation), "tenting effect"[12] (grasping the overlying mucosa with the biopsy forceps presents a tent-like appearance), and the "naked fat sign"[13] (biopsies may result in an extrusion of yellowish fat). Although colonoscopy is reliable for the diagnosis of the usual type of lipoma, it is more difficult for diagnosis of those lesions with an atypical, callous or ulcerated shape. In our case, the necrotic mucosa and numerous areas of ulceration that existed on the tumor surface, together with a relatively hard texture, may have confused the above-mentioned signs, therefore leading to the subsequent misdiagnosis. In addition, biopsy by colonoscopy may provide limited help for the diagnosis of some large lesions, because it cannot obtain adequate tissue. If the adipose tissue lies beneath the normal or ulcerated mucosa, it is not likely to be diagnostic; furthermore, if biopsy yields benign tissue, it is not possible to completely exclude the possibility of malignancy. The exact diagnosis still mainly relies on an intra- or postoperative pathology examination.

Many therapeutic interventions have been tried for the treatment of colonic lipoma, which have varied from hemicolectomy to segmental resection and local excision, according to the correct preoperative diagnosis and intraoperative findings. With the advancement of colonoscopy, endoscopic cautery snare resection of colonic lipomas has become popular and has been proven to be a safe therapeutic method, especially for small lesions[1,3,4,6,7,14]. However, various views with regard to endoscopic removal of large lipomas have been reported. Some studies have demonstrated that removal of lipomas ≥ 2 cm in diameter is associated with a greater risk of perforation[3,15,16]. On the contrary, some authors have reported that large pedunculated and large sessile lesions can be removed without perforation[6,7]. Kim et al[1] have performed endoscopic removal of lipoma with a maximum diameter of 3.8 cm, assisted by injection of saline solution with or without epinephrine into the submucosa beneath the lesion, with no complications. Bar-Meir et al[7] have described the safe endoscopic removal of a very large 5-cm lipoma. In addition, the feasibility of slow mechanical transection of a large colonic lipoma (4 cm) with an endoloop ligation technique has been demonstrated by Raju et al[15], whereas this novel technique may require application of additional loops several weeks later. The removal of colonic lipoma with the assistance of laparoscopy has also been reported[17].

However, on the basis of our case and the published literature, we think that surgical removal should be the preferred choice for the following indications: (1) lipoma with a diameter of > 4 cm, with a sessile appearance or limited pedicle; (2) unclear preoperative diagnosis; (3) lesions with significant symptoms, especially the appearance of intussusception; (4) involvement of the muscular layer or serosa; and (5) lesion cannot be resected radically under colonoscopy. Although colonic lipoma is a benign tumor, intraoperative frozen sections are required to ensure negative surgical margins, which can guide the choice of surgical approach. As far as our patient was concerned, left hemicolectomy would have been performed instead of local resection, if we had not taken a frozen section intraoperatively. Overall, intraoperative pathology is the most important examination for doubtful cases of colonic lipoma, which can also assist in guiding the exact diagnosis and treatment planning.